By Nick A. Romero, Biologist and environmental educator. October 6, 2022

Dolphins belong to the toothed whales, so they are mammals and have pulmonary respiration. Within this group there are a number of different species, but they all share these characteristics. One of the best known species is the common dolphin (Delphinus capensis), which belongs perhaps to the most representative family, the Delphinidae. However, there are other dolphin families that group different species together.

The following AnimalWised article explains the main characteristics of dolphins, such as their anatomy, feeding behavior and much more.

Dolphins are mammals that have adapted their anatomy to life in the water. Although there are some differences in the characteristics of dolphins depending on the species, they also have some characteristics in common. Below, we will talk about some of them:

Dolphins are excellent swimmers, largely due to their torpedo-shaped bodies and powerful tails. Other fish swim by paddling with their fins, but whales and dolphins use their fins for vertical and horizontal stabilization, which aids in turns, braking, and acceleration. The tail, which they move up and down, allows them to move around, jump, and sometimes they use it to stay upright on the surface for short periods of time. Next, we will explain in more detail each of the parts involved in the dolphin's movement:

If you want to learn more about dolphins, you should not miss the following article, where we describe interesting facts about dolphins.

The dolphin belongs to the group of mammals scientifically known as cetaceans. Dolphins are part of the largest group of marine mammals belonging to the order Cetacea. The taxonomy of dolphins Another characteristic of the dolphin is that of its taxonomy, which is as follows:

In 1825, the English biologist and naturalist John Edward Gray classified the various species of dolphins in the world and placed them in the suborder Odontoceti. This order classifies only cetaceans with teeth and excludes whales, marine mammals with baleen, from this suborder.

If you want to learn more about other marine mammals, do not miss the following article, where we list all the mammals that live in the water.

Where do dolphins live?

As for the habitat of dolphins, we must emphasize that it varies according to the species.

Today, all oceanic common dolphins have a cosmopolitan distribution in tropical as well as in cold and temperate waters of the Atlantic, Pacific, and Caribbean. On the other hand, there are other species whose habitat is more restricted. Some examples are:

How is the behaviour of dolphins?

Dolphins are known for being social and cooperative animals. They usually live in a community, with hierarchies and specific tasks. Hunting together is part of the behavior of dolphins. And when working together, they are supportive and even interact with other species, including fishermen, to help each other hunt, find food and move around. They also protect themselves from predators and care for conspecifics who are injured or in distress.

Unlike killer whales or baboons, which live in stable groups, dolphins live in societies where members come and go. The average group size is four, but some can have as many as 30 members.

Finally, dolphins have been shown to be curious about, approach, interact, cooperate, and share with humans. They can learn some techniques and behaviors by solving difficulties, following routines and exercises. They also recognize themselves in the mirror. An important feature of dolphin behavior proves that the dolphin is one of the few animals that recognizes itself by seeing its reflection, which demonstrates a certain self-awareness.

Why do dolphins jump?

Dolphins are playful, natural acrobats and excel among their underwater counterparts. They can catapult themselves out of the water like no other animal. Although they are not the only whales that can jump, it is a fact that no other animal can turn in the air.

Jumping allows them to fill their lungs with oxygen while staying hydrated and traveling a short distance to salt water. However, that's not the only reason. Dolphins also jump to see better from a higher vantage point. When they jump, they are able to locate other members of the herd while also locating the fish they need to feed on.

In addition, by jumping out of the water, they can communicate with their conspecifics.

If you want to learn more about the reasons why dolphins jump out of the water, do not miss this other article, where we take a closer look at the topic.

How do dolphins communicate?

Dolphins communicate through a wide range of nonverbal sounds and gestures. Like humans, dolphins use both verbal and nonverbal expressions to communicate with each other. These include whistles, clicks, and broadband sound packets called burst pulses. Studies by researchers around the world have collected data on a variety of nonverbal sounds and gestures used by dolphins for what many believe is a complex communication system.

The complexity of their "language" remains a mystery to humans. Dolphin sneakers argue that dolphins and humans can communicate in a limited way. This "limited way" involves learning certain training tasks and expressing desires for things like food. However, communication of more sophisticated and complex thoughts or commands remains indecipherable.

If you want to learn more about dolphin behavior and communication, do not miss this other article where we talk about the dolphin mating and reproduction process.

What do dolphins eat?

Most dolphins feed primarily on fish, and to a lesser extent on squid and small crustaceans. However, some species specialize in eating squid or, like the orca, also eat marine mammals and birds.

All, however, are pure carnivores. They usually have between 100 and 200 teeth, although some species have significantly fewer. There are various feeding methods among and within oceanic species, some apparently exclusive to a single population.

Due to its great ability to perceive sounds, its speed and intelligence, the dolphin usually has no predators in its natural habitat. However, according to the IUCN Red List of Threatened Species, of the 41 species of dolphins, five species and six subspecies are threatened with extinction. The current conservation status of these species is as following:

One of the greatest threats to survival is incidental bycatch from fishing. Dolphins are also vulnerable to the "bushmeat" trade as well as marine pollution. In the case of the Amazon dolphin, poachers illegally hunt and kill the dolphins and use their fat blubber as bait to catch other fish.

If you want to learn more about dolphins, you should not miss the following article, where we describe in more detail the main characteristics of the different species of dolphins.

If you want to read similar articles to Dolphin Characteristics, we recommend you visit our Facts about the animal kingdom category.

Bibliography
List of Cetaceans - Meaning, Types And Characteristics
Types of Porpoises - Characteristics of Porpoise Species
Dolphin Mating and Reproduction
What are Ungulate Animals? - Definition, Characteristics and Examples
Related categories
Endangered animals
Most read
1.
What Animal am I According to my Zodiac Sign?
2.
What Does It Mean When a Cat Shows Up at My Door
3.
10 Most Beautiful Animals in the World
4.
Examples of Vertebrate and Invertebrate Animals
5.
Why do Dogs Get Stuck when Mating?
6.
The 10 Most Solitary Animals in the World
7.
Differences Between Deer, Elk, Moose and Reindeer
8.
Animals With Scales - Full List
Different Species of Dolphins - 18 Types and Photos
How Do Dolphins Breathe Underwater?
10 Fun Facts About Dolphins
Types of River Dolphins Around the World
Why Do Dolphins Jump Out of the Water?
What Is a Binturong? - Bearcat Characteristics
Jawless Fish - Characteristics And Examples
Animals Without A Brain - Names & Characteristics 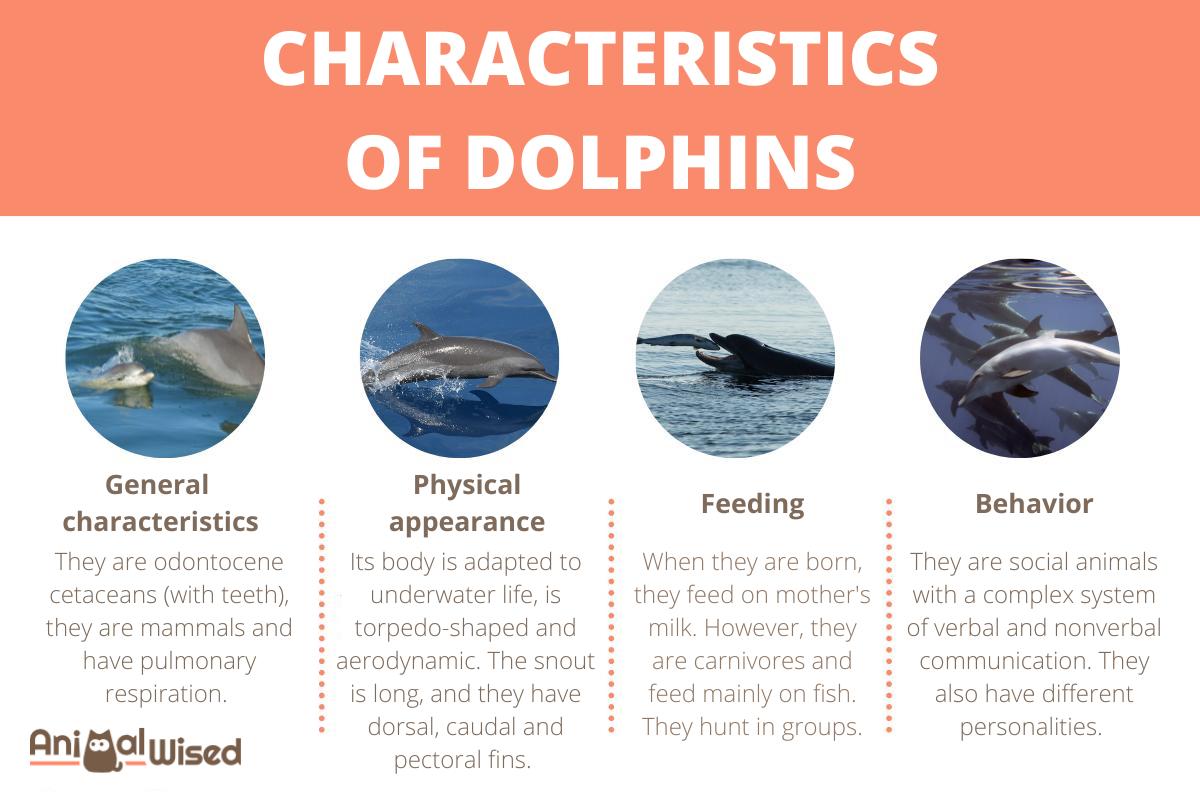 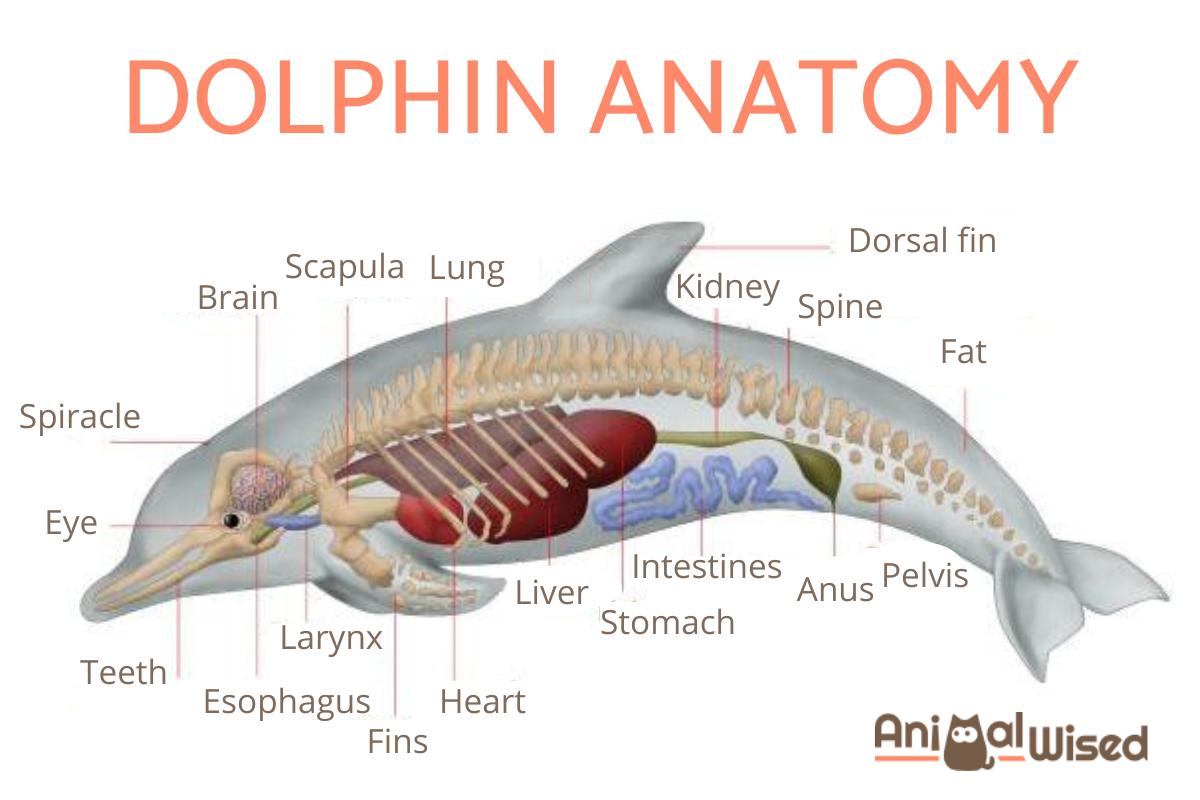 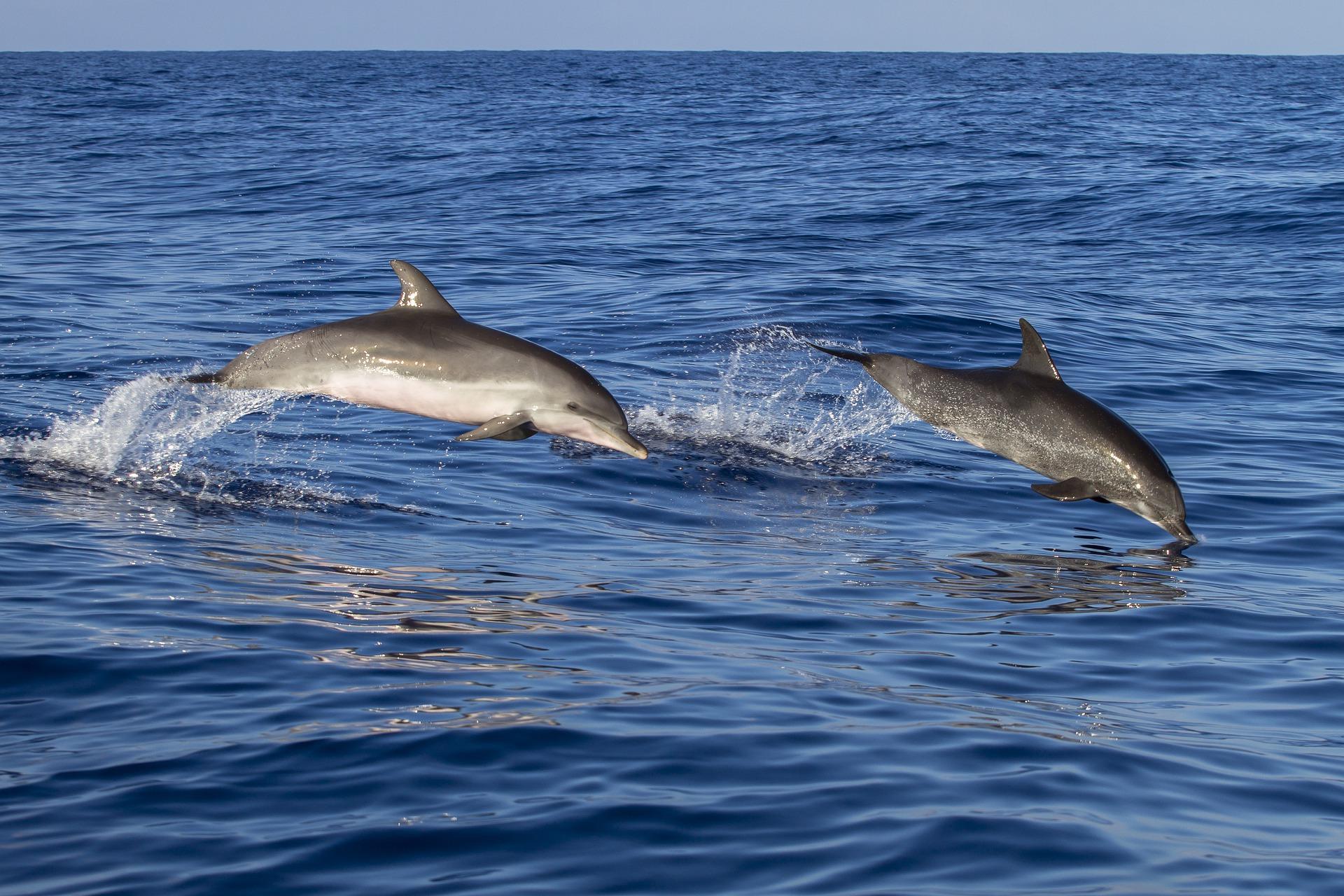 1 of 3
Dolphin Characteristics
Back to top