At first glance, the Greyhound and the Warren Hound, also known as the Podenco, may look very similar. After all, they are both slender, athletic dogs and widely known for their hunting abilities. Nevertheless, they differ both physically and psychologically. The origins of both dogs are quite old, and they have been used for centuries to hunt rabbits and other small animals. Although both dogs are quite fast, the greyhound is actually the fastest dog in the world and therefore has been used in races for decades.

The following AnimalWised article explains the main differences between greyhounds and warren hounds in terms of health, care, behavior, and appearance.

You may also be interested in: English Greyhound vs Spanish Galgo
Contents

Origin of the Greyhound and the Warren Hound

Greyhounds and Warren hounds are both ancient breeds, as evidence of their existence dates back to the Pharaonic era of Ancient Egypt, where artistic and architectural representations of dogs similar to them were engraved.

Origin of the Greyhound

The term greyhound, also known as Galgo in Spanish, comes from the Vulgar Latin gallicus canis, meaning "dog of Gaul". Even in Ancient Greece and Rome, greyhounds were used for hunting and catching rabbits. During the Middle Ages, they spread throughout the Middle East and Europe and eventually made their way to Britain, where they became a status symbol. Greyhounds are great running dogs that can reach up to 70 km/h. In fact, in the animal kingdom, they are surpassed in speed only by the cheetah. At the beginning of the 20th century, greyhounds became very popular in the canodromes, which were fashionable in England at that time. Today, greyhounds have left the world of racing behind and have become a popular pet due to their good-natured nature.

Origin of the Warren Hound

Warren hounds, also called Podencos, are believed to be descended from Egyptian breeds such as the Tesem, a now extinct dog with very similar characteristics to modern Podencos, which accompanied the Pharaohs and performed protective and hunting duties. However, it was the Phoenicians who spread their trail throughout the Mediterranean, where the warren hounds settled mainly in Italy, Malta and the Iberian Peninsula. Nowadays, Spain and Portugal are the areas where most of the different types of Podencos are native, including the Valencian, Ibizan, Andalusian and Canarian types.

If you are interested in other old Spanish breeds such as the Greyhound and the Warren Hound, you should not miss the following article, where we list the most popular Spanish breeds.

Physical characteristics of the Greyhound and the Warren Hound

Both Greyhounds and Warren hounds have a slender, graceful, and athletic build, with fine muzzles, strong limbs, and long tails that are perfect for racing. However, they also differ in several physical aspects.

If you want to learn more about the greyhound breed, do not miss the following article, where we explain the main characteristics and differences between the Spanish greyhound and the English greyhound.

Character of the Greyhound and the Warren Hound

As hunting dogs, Greyhounds, and Warren hounds have quite similar temperaments, although Warren Hounds are generally more active and playful.

Character of the Greyhound

Greyhounds are very active, sensitive and friendly dogs. Both breeds, but especially greyhounds, tend to be somewhat shy and reserved, which makes it easy for them to develop fears and phobias if they are not properly socialized as puppies. However, if this aspect is taken care of and their physical, social and emotional needs are met, these dogs enjoy the company of people and other dogs, are playful and rarely exhibit aggressive behavior.

Character of the Warren hound

Warren dogs are very affectionate and sensitive. They are very loyal, usually have a fondness for children, and make excellent pets in the right home. They can be very loud and require lots of company. It is not a breed that can be left alone for hours at a time.

Both breeds require long daily walks to satisfy their need for physical exercise and sensory stimulation, preferably in a place where they can run freely or explore the environment. However, at home they tend to be calm and sleepy, so they adapt perfectly to life in an apartment.

If you want to learn more about the socialization process dogs must go through to avoid behavior problems, do not miss this other article, where we explain how to socialize both puppies and adult dogs.

Care of the Greyhound and the Warren Hound

Both breeds are relatively low maintenance and do not require special care. However, some considerations must be made in order to provide the dogs with a healthy, long and happy life.

Care of the Greyhound

If you want to learn more about this breed, read this other article, where we go into more detail about caring for a Spanish Greyhound.

Care of the Warren hound

Health of the Greyhound and the Warren Hound

Although both breeds are known for their hardiness and good health, they can suffer from certain genetic diseases just like any other breed. Knowing about these potential diseases is important because it allows us to be vigilant and make an early diagnosis.

Health of the Greyhound:

The Greyhound is a robust breed with few known health problems. Some neurological disorders have been reported, but they are not very common. We can talk about common diseases in Greyhounds due to genetic predisposition, but these include:

Health of the Warren hound:

Warren dogs are also a very healthy breed. As for possible diseases, like any breed, they are prone to certain hereditary diseases such as:

If you want to learn more about other fast dog breeds, do not miss this other article, where we present the fastest dog breeds in the world.

If you want to read similar articles to Greyhound vs Warren Hound, we recommend you visit our Comparisons category.

Bibliography
Spanish Dog Breeds- Top 26
Indian Breeds Of Dog List
Cavapoo vs Cockapoo
Native Asian Dog Breeds
Related categories
NamesIdeal forThe least...What you need to knowThe most...
Most read
1.
Best Names for American Bully Dogs
2.
What is the Difference Between a Donkey, a Mule and an Ass?
3.
Tamil Names for Dogs - With Meanings
4.
100 Popular Bird Names
5.
Can You Have an Otter as a Pet?
6.
The 5 Most Wrinkly Dog Breeds
7.
How long does a Cat Take to Adjust to a New Home?
8.
17 Best Spotted Dog Breeds
Doberman Pinscher vs. Rottweiler
Differences Between a Persian vs. Angora Cat
How to Tell the Difference between a Beagle and a Basset Hound
How are Dogs Classified into Types and Groups?
Male Vs. Female Cats - Which Should I Adopt?
Fluffiest Dog Breeds - TOP 12!
Doberman VS. German Shepherd - What Are the Differences?
Different Types of African Dog Breeds 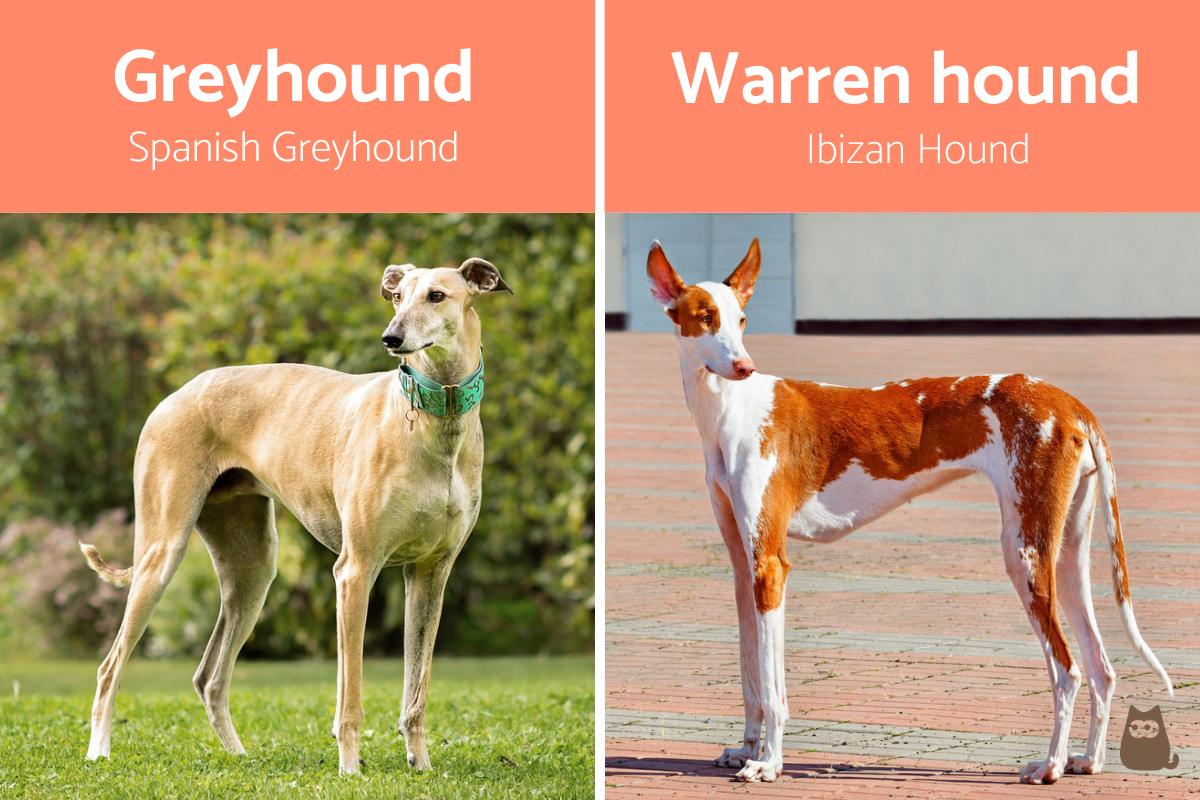 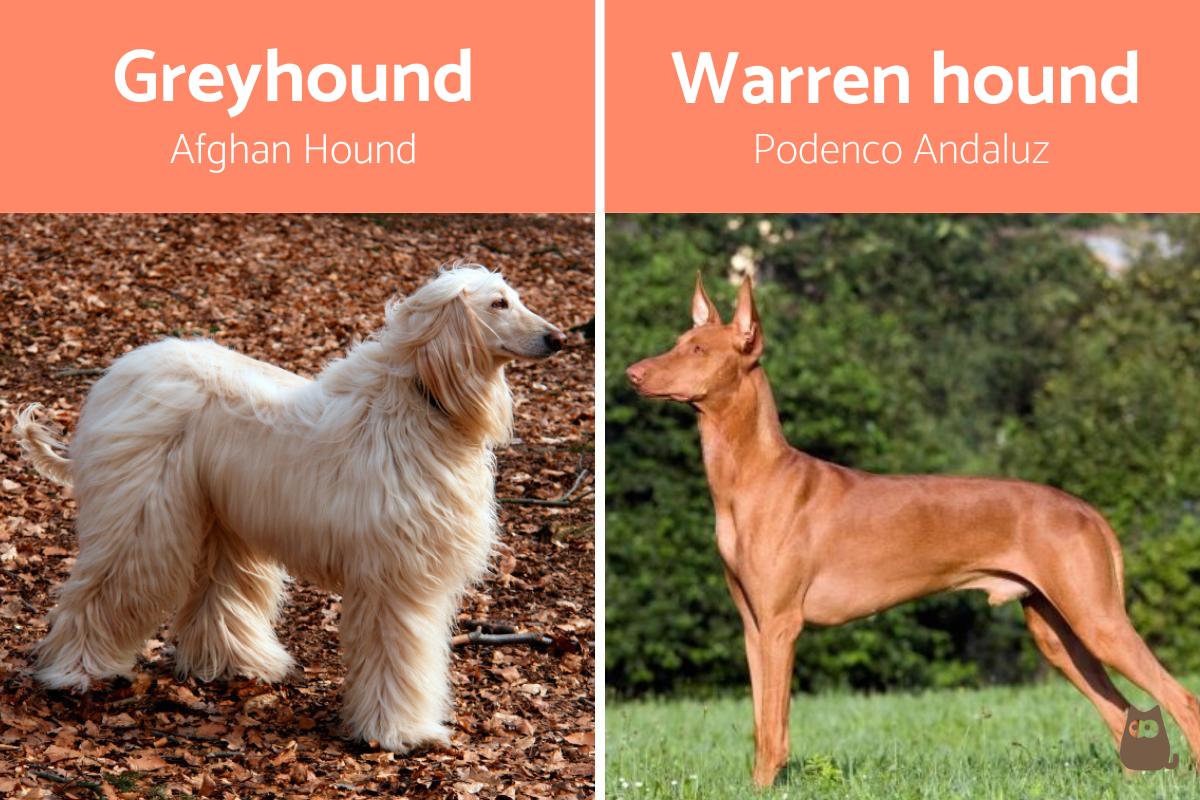 1 of 2
Greyhound vs Warren Hound
Back to top