How Do Turtles Communicate?

Turtles are an order of reptiles known as testudines, characterized by a shell developed primarily from their ribs. There are 360 living and recently extinct species of turtles found on most continents, some islands, and, in the case of sea turtles, in much of the oceans. For a long time, people thought that turtles could not really communicate with each other. But over time and with the help of numerous studies, we have found that this could not be further from the truth.

In the following AnimalWised article, we explain how turtles communicate and other interesting facts about these amazing reptiles.

You may also be interested in: How Do Dogs Communicate?
Contents

Turtles belong to the order Testudines, which is divided into two suborders to which all present-day species belong: Pleurodira and Cryptodira. The difference between these two groups lies in the way these animals can retract their heads. In the first group, the vertebrae are curved laterally so that they can move their head sideways. In the second group, however, the vertebrae are curved vertically so that they can retract their head into the shell.

These animals can live both in water and on land, but in general there are several species that maintain intermediate habits. For example, sea turtle species lay their eggs in the sand outside the water, and freshwater turtles also come ashore. Also, all of them need to breathe air, so they have to go to the surface to do so.

Until recently, not much was known about the sounds turtles can make, as they are usually very quiet animals. The ability of turtles to camouflage themselves helps them survive in the wild. They are also not as sociable as other animals such as dogs, birds, or dolphins.

Furthermore, scientists used to think that sea turtles were unable to communicate with each other, at least not through sounds, because they do not have vocal cords or external ears. But in recent years, research has disproved these assumptions.

Although there are no studies yet on different taxa, research has confirmed that both aquatic and terrestrial turtles communicate through different types of vocalizations. Turtles may not have vocal cords, but they can still make sounds.

The sounds a turtle makes depend on its sex and species. Some turtles can cackle, while others make a high-pitched, whimpering sound. They can even make hissing sounds and other low-frequency sounds. While it's true that turtles have few means of communication compared to most birds and mammals, these prehistoric creatures have been around for a long time (220 million years). This is partly because their communication is efficient and effective.

Not only can turtles make various sounds, but they can also communicate through nonverbal communication. Furthermore, they can even communicate with their mothers before the young hatch from the eggs, which is essential for their survival in the wild.

If you want to learn more about turtles, continue reading this article, where we explain if turtles can hear sounds.

As mentioned above, turtles do not have vocal cords per se, but they have adapted to express a wide variety of information nonverbally. One of the main ways they communicate nonverbally is through courtship behavior. Turtles have different mating behaviors, and the way they communicate in this context varies by species.

During mating, communication consists of visual and tactile cues. In some species, the male usually touches the female on the neck and head with his claws. Other species have a more direct method of attracting their mates during the mating season. Females may blink continuously to attract a male mate. Similarly, a male may splash water in the female's face to signal his intention to mate. Turtles, in turn, have a complex set of head bobbing routines to attract mates.

Biting is also an important means of communication for turtles. When a turtle bites, it means that it wants to be left alone. Biting is the turtle's way of letting you know that it does not want to be held. Similarly, when the turtle retreats into its shell, it means it is afraid.

Headbutting also occurs when turtles are involved in aggression and fighting. Males can also ram and bite shells. They do this to defend their territory and demonstrate dominance. This form of communication is used to establish social hierarchies. Gopher tortoises, plowshare tortoises, and African angle tortoises can even knock their opponents over during fights.

Aside from courtship and fighting, tortoises also exhibit other social behaviors through communication. Nose touching, head butting, body posture, and even breathing are ways turtles communicate. Turtles can introduce themselves by touching their nose.

Continue reading this other article if you want to learn more about turtle reproduction.

How do aquatic turtles communicate?

As solitary animals, sea turtles rarely communicate. For centuries, sea turtles were thought to make no sounds. It was not until 1999 that people finally recorded the sounds of sea turtles.

Sea turtles communicate by emitting different types of sounds at different frequencies. These sounds consist of complex combinations of grunts and pumps. In leatherback turtles, for example, more than 300 different sounds have been recorded.

In some species, such as the green sea turtle (Chelonia mydas agassizii), distress calls have also been recorded. Analysis of underwater recordings shows that green sea turtles make pulsing sounds when they approach divers.

This communication process begins even before the egg hatches. Although aquatic turtles are aquatic dwellers, they spawn at the surface of the earth and choose the location they deem most suitable for spawning. Females have been shown to communicate with their young in the water through vocalizations, even when the mother is not present at the breeding site.

But the communication of these animals goes much further, as both egg-laying and mass hatching of the young are not random. Females communicate to spawn in groups, and later the hatchlings themselves also make sounds in the egg, which they then synchronize and leave almost simultaneously. Since many turtles that have just hatched from the egg are attacked by predators, mass hatching increases their chances of survival.

If you want to learn more about aquatic turtles, do not miss the following article explaining the different types of sea turtles and their main characteristics.

How do tortoises communicate?

Tortoises also emit different types of sounds or vocalizations to communicate. These sounds can be produced by the speed at which air passes through the esophagus. But just like aquatic turtles, terrestrial turtles can also communicate using a variety of signals. These can be verbal, visual, and even olfactory.

One of the main periods when turtles are most communicative is during mating. Males will stick their head out toward the female turtle and wiggle their head to show their mating intent. The male may also moan or grunt to attract the female's attention. Male turtles may also circle the female, ram her shell, and even bite her. Males may also ram and bite shells when fighting for territory.

Body posture is also an important means of communication for tortoises. When a tortoise is shy, fearful, or stressed, it will retreat into its shell. A confident tortoise will stick its head out all or part of the way. A raised head is a sign of confidence and is often observed in outgoing turtles.

Tortoises make excellent pets, but before you get one, you should know how to care for it properly. If you want to learn more, do not miss our guide to caring for a pet tortoise.

If you want to read similar articles to How Do Turtles Communicate?, we recommend you visit our Facts about the animal kingdom category.

References
Bibliography
How Do Cats Communicate?
How Long Do Turtles Live? - Longevity of Turtles
How do Bees Communicate? - Bee Language
How Do Animals Communicate With Each Other?
Related categories
Endangered animals
Most read
1.
What Animal am I According to my Zodiac Sign?
2.
10 Most Beautiful Animals in the World
3.
What Does It Mean When a Cat Shows Up at My Door
4.
The 10 Most Solitary Animals in the World
5.
Why do Dogs Get Stuck when Mating?
6.
My Female Dog In Heat Won’t Accept A Male - Causes
7.
How Many Types of Lions Are There?
8.
Animals With Scales - Full List
Do Turtles Have Teeth?
Interspecies Communication: Can Animals Communicate With Others?
Can Turtles Hear Sound?
How do Reptiles Breathe? - Reptile Facts
New
How Do Reptiles Reproduce?
Fun and Interesting Facts About Turtles
How Do Spiders Reproduce?
How Do Crocodiles Reproduce?

How Do Turtles Communicate? 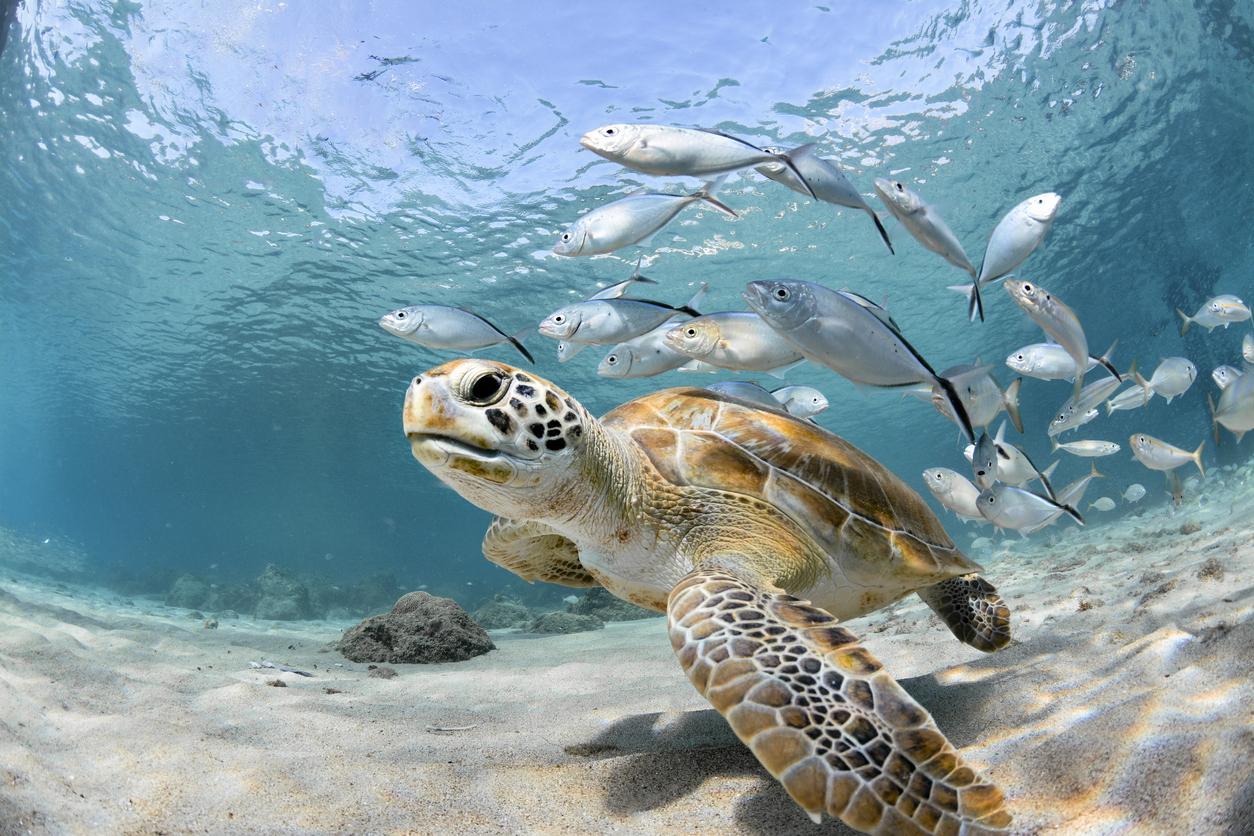 How Do Turtles Communicate?
Back to top