How Long Is the Life Cycle of a Butterfly?

By Nick A. Romero, Biologist and environmental educator. January 26, 2021

Butterflies are beautiful insects that go through a four-stage process to become the lovely butterflies we see roaming in our garden.

If you're curious about these interesting insects, keep reading this oneHOWTO article where we will explain how long is the life cycle of a butterfly. We will also explain each stage and other related questions.

You may also be interested in: How is A Butterfly Born? - Butterfly Life Cycle
Contents

What is the life span of a butterfly?

The life span of an adult butterfly varies because it is related to various factors, such as:

Generally, a larger butterfly can have a longer life span than a smaller one, since it manages to resist or avoid certain impacts with greater strength than those of a smaller size. With that being said, the longest life spans in butterflies is 6-12 months. This includes Monarchs, Painted Ladies, Mourning Cloaks, among others.

The smallest and most fragile butterflies, on the other hand, usually live a few days or a week, while others can reach a month of life. With that being said, among the small butterflies, some of the longest-lived are the Nymphalis antiopa and the Danaus plexippus, which manage to live for several months. Some specimens have even managed to reach almost a year of life.

The reproduction of butterflies

Like other animals in the animal kingdom, butterflies have sexual dimorphism, which means that males and females are visually different. In fact, males are able to identify females by the colors and shapes of their wings.

On the other hand, butterflies are oviparous animals with internal fertilization, so once they unite their abdomens, the male introduces his sexual organ inside the female and releases the spermatophore, which is a capsule that contains sperm. Afterwards, she can reserve them inside until she finds the ideal plant for oviposition, in which she will expel the eggs that will be fertilized before going outside.

This form of reproduction has given the females the possibility of choosing the moment and place to release the eggs, which guarantees that they are deposited in the plant where they will have greater protection during the development of the embryos. In addition, this plant is a highly palatable food to the caterpillars that will be generated. There are also other mechanisms for the protection of their embryos, so that some species of butterflies lay their eggs in a dispersed way in several plants, while others do so en masse in the same place.

In general, the reproductive strategies of the butterfly varies between different species, so that some can copulate in flight, while others do so on some substrate.

For more information, don't forget to also read our AnimalWised article on how do butterflies reproduce.

Stages of the butterfly life cycle and its characteristics

The life cycle of the butterfly is made up of four stages. The first three stages last between 30 and 120 days, this will depend on both the species and the environmental conditions. Let's dive deeper into the characteristics of each stage of the butterfly life cycle:

Some butterflies lay their eggs on different types of plants, while others do so more specifically. They vary in size and color depending on the species and, generally, once a plant is used for oviposition, other butterflies will not use it, probably in order to avoid competition between caterpillars.

The eggs can be laid individually or in groups and if the environmental conditions are not favorable, the butterfly will avoid laying them. This is because this is the stage of greatest vulnerability for these animals, which are also susceptible to predation by other species. This phase can last a few days or several weeks.

Individuals in this phase are normally known as caterpillars. This stage begins when they hatch from the egg, consisting of a time mainly for the nutrition of the larva from the consumption of the leaves of the plant, since it must store reserves for the later stages.

The larvae are covered in a chitin exoskeleton that provides protection and, as in the egg stage, some species of caterpillars are kept in groups, while others are alone. In the first case, this gives them advantages such as thermoregulation, defense against natural enemies and cooperation for the consumption of the leaves that can be difficult if they do it individually. In the second, they are less exposed to attack by parasites and predators, as well as to competition for food.

Within the larval stage, this animal goes through a period consisting of four to seven phases, which are known as the developmental stage, and the number of phases will depend on the species of butterfly. As the caterpillar must grow, in each of these stages their exoskeleton is changing and they must fuel this stage by eating plenty. Then, before starting the next phase, They reduce their food consumption and prepares for the next transformation.

Also called pupa or colloquially "cocoon", this is a phase in which the animal remains fixed in a place it has chosen, but also great transformations occurs in it through metamorphosis.

Butterflies have developed adaptive strategies at this stage, which is why the chrysalis have particular shapes and colors that make them go almost unnoticed in the places where they are fixed. This stage can also last several days, but as in the previous ones it will depend on the species.

This is the final stage of the life cycle of butterflies, emerging from the fully developed and sexually mature pupa, so they can now reproduce. Upon leaving the chrysalis, the individual is moistened, but once they spread their wings and dries up, they are capable of flight.

Adults feed differently than in the caterpillar phase. In this case they do it from nectar, pollen and fermenting fruits. In any case, they require nutrients rich in sugar that provide them with the necessary energy to carry out their flights.

Butterflies are quite susceptible animals, since they are not only exposed to their natural predators, but environmental conditions play a determining role for them. In addition, in the cases of species that select particular plants to lay their eggs, they are at greater risk if these plants are no longer present in their habitat, since not only the place for their development is being eliminated, but also their source of food.

If you want to read similar articles to How Long Is the Life Cycle of a Butterfly?, we recommend you visit our Facts about the animal kingdom category.

Bibliography
Life Cycle of the Pine Processionary Caterpillars
Life Cycle Of Sea Turtles
Butterfly vs. Moth - Differences Between Moths and Butterflies
Life Cycle of a Cat - Stages of Development
Related categories
Endangered animals
Most read
1.
What Animal am I According to my Zodiac Sign?
2.
10 Most Beautiful Animals in the World
3.
What Does It Mean When a Cat Shows Up at My Door
4.
The 10 Most Solitary Animals in the World
5.
Top 10 Smells Dogs Hate
6.
How Many Types of Lions Are There?
7.
Why do Dogs Get Stuck when Mating?
8.
My Female Dog In Heat Won’t Accept A Male - Causes
Starfish Life Cycle - Reproduction and Life Stages
Body Parts of a Butterfly and Their Functions
What is the State Animal Of...
How Long is an Elephant's Pregnancy?
How Long Do Eagles Live?
Life Expectancy of Boxer Dogs
How Long Is a Fish's Memory?
How Long Does a Cat Live?

How Long Is the Life Cycle of a Butterfly? 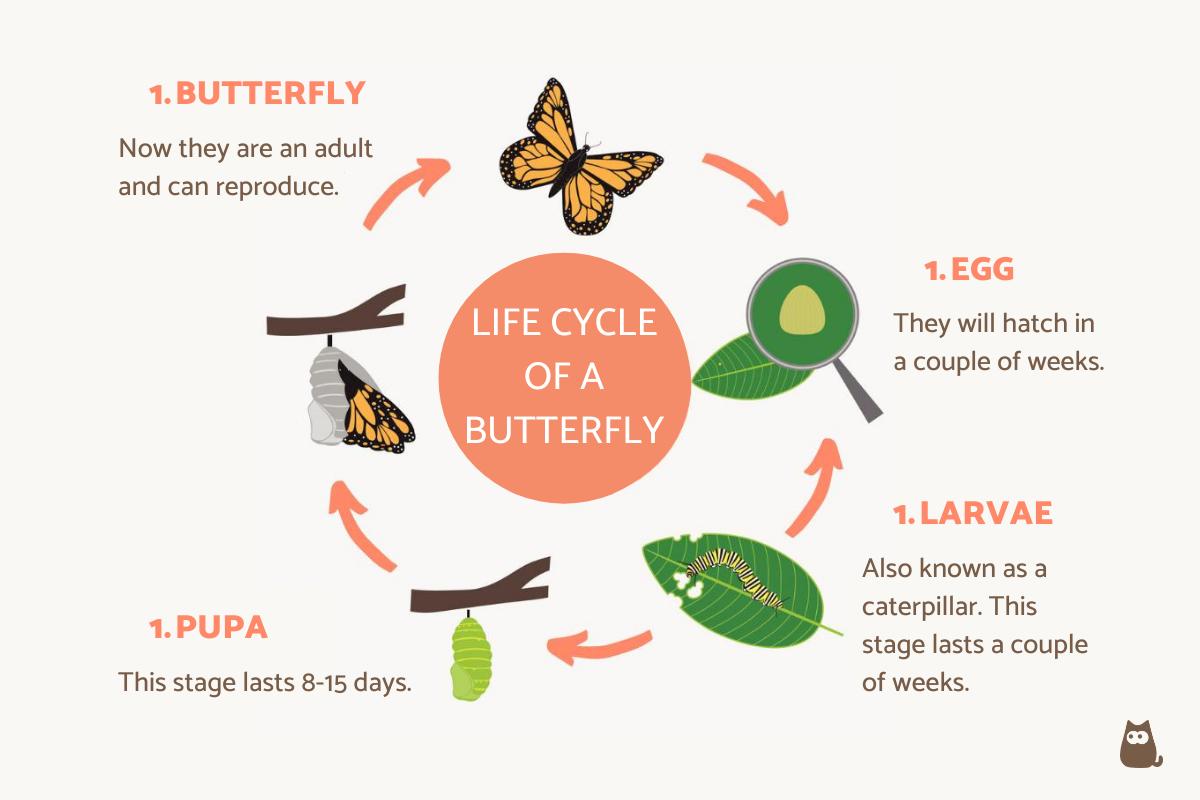 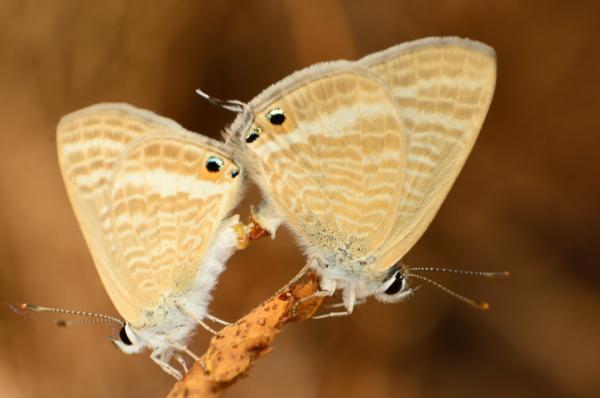 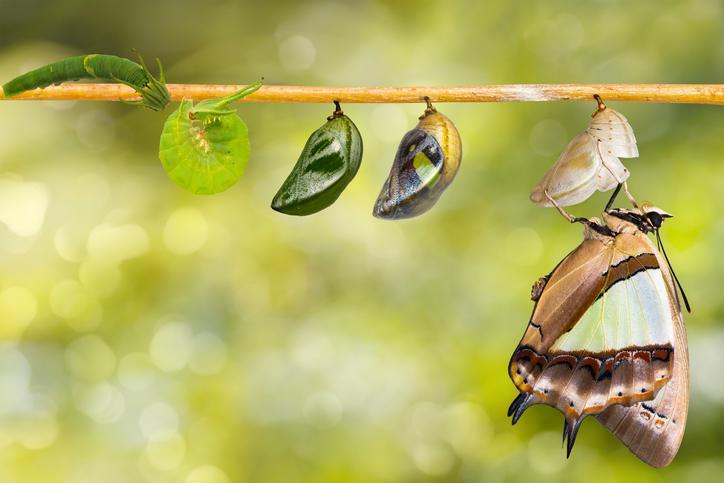 1 of 3
How Long Is the Life Cycle of a Butterfly?
Back to top