Seal vs. Sea Lion vs. Walrus

By Nick A. Romero, Biologist and environmental educator. November 24, 2021

When we discuss mammals, it is common for us to think of terrestrial animals. For this reason, many of us still confuse some aquatic mammals for other vertebrate animals. This can be seen when people confuse whales as fish. However, if we look closer at marine mammals, we can see they have the fundamental characteristics of other mammal life. The main difference is their bodies are adapted so they can survive in mainly aquatic environments. Some marine mammals are also able to survive for periods on land, something seals, sea lions and walruses all share.

Due to certain similarities, it is common for us to confuse the seal, the sea lion and the walrus with each other. At AnimalWised, we look at the differences between seal vs. sea lion vs. walrus. We share the characteristics which define each species and share photos so you can see some of these differences for yourselves.

You may also be interested in: Types of Seals Around the World
Contents

Taxonomy of seal vs. sea lion vs. walrus

Walruses, seals and sea lions are all pinnipeds, a clade of carnivorous semi-aquatic mammals which are collectively known as seals. This is a diverse group with many different Families, making it quite confusing when trying to distinguish between these different animals.

Adjustments and some controversy has arisen over taxonomic classification of these animals. While they all share common ancestry, some seem to be closer in morphology to ursids (bears) while others are closer to mustelids (weasels, badgers, etc.).

Of the seals, walruses and sea lions we discuss in this article, only one is considered a ‘true seal’. These are the various genera which can be found in the Phocidae family. Below, we look at the taxonomic grouping of these seal species in more detail.

While true seals and sea lions consist of various genera, there is only one remain genus of walrus:

Previously, the species was subdivided into the Atlantic walrus (O. R. Rosmarus), the Pacific walrus (O. R. Divergens) and Laptev walrus (O. R. Laptevi). However, based on scientific research, it has been suggested that the latter be eliminated, leaving only two subspecies of walruses.

As for the seals, their general classification is presented as follows:

Seals have the following genera in which, in addition to differing species, certain subspecies are also found.

Finally, we can see the following classifications of true seals:

In the case of sea lions, the species and some subspecies are grouped into the following genera:

As we have seen, walruses, seals and sea lions are aquatic mammals. If you want to know more about these types of marine life, check out our article on characteristics of aquatic mammals.

Characteristics of seal vs. sea lion vs. walrus

Due to their spindle-shaped bodies, slick looking coats and lumbering flippers, it is easy to confuse these animals at first glance. However, there are important differences which can help us distinguish between a walrus, seal and sea lion.

Walruses have a particular morphology. Their limbs have been modified to form fins, as is the case with most pinnipeds. In the case of walruses, these modifications are important to move both in water and on land effectively.

They are able to rotate the pelvic fins downward to aid water displacement while swimming. They have an adipose layer of fat underneath their wrinkled skin which up to about 15 cm thick. This helps insulation, since their fur is relatively thin.

Perhaps the most distinctive feature of walruses is their long canine teeth, which are often called tusks. The walrus can reach great sizes. In the case of males, they can weigh up to 1.3 t and females up to 0.9 t. The head is rounded, the muzzle is wide, with thick vibrissae (whiskers) and they lack an external ear. The coloration is brown, but some individuals have yellowish tones.

Phocids or true seals vary considerably in size according to the species. They range from ringed seals at about 198 lb to the immense elephant seal which can weigh more than 3 t. Their limbs have claws and the front fins are smaller than the rear ones. Rear fins on seals cannot bend down from the body, meaning they cannot walk on land. However, they can crawl across land at swift speeds.

They have a layer of fat which makes up to 25% of the body's weight. The amount of fur and its coloration varies according to the species, and different patterns can present. Certain genera are practically hairless while others have furry snouts. Seals do not have external ears, but their ear canal is unique and well protected to efficiently withstand high pressures from being underwater. Finally, phocids are mammals adapted to swim very efficiently.

There are some species which are commonly called as sea lions, but they also correspond to the group of otariids. These have external pinnae which form a small ear at either side of their head. Unlike seals, their long thoracic limbs can flex to move on land. Their hindquarters are also large and all four have small claws. All species of sea lion have fur, but it varies.

In seals, the hair is generally abundant and coarse, making it more specialized for thermoregulation. In sea lions, the coat is short, less coarse and sticks to the skin when wet. In general, the coloration tends to be uniform brown tones. The weight range varies between 330 lb and 1 t, with males being larger than females.

Other than sea lions, the only other species which makes up the Otariidae family is the fur seal. This can be confusing due to the name seal being in their name. However, as all sea lions are technically seals, just not true seals, it isn't incorrect. As with sea lions, fur seals also have ear pinnae which mark them out from their true seal cousins.

Habitat of seal vs. sea lion vs. walrus

Another of the key differences between seals, sea lions and walruses is their habitat. Below we explain where each of these animals life and how they adapt to these environments.

Walruses have a distribution in the Northern Hemisphere, being present in the arctic and sub-arctic marine areas. They do not live in one place continuously, but live near regions such as:

Eventually, there are some individuals who move to other countries such as Belgium, Denmark, Finland, France, Germany, Spain, the United Kingdom, among others. They are generally on the continental shelf and submerge at shallow depths.

As for true seals, their greater variety of species gives them a greater population distribution. They live in latitudes of both the Northern and Southern Hemispheres. Depending on the species, they live in polar, subpolar, temperate or tropical maritime regions. However, there is one exception; the Baikal seal (Pusa sibirica). This seal is endemic to Russia and lives in fresh waters. Some examples of seal habitats include:

Seals can dive to great depths. Some species have migratory behaviors, so they can swim long distances. Find out more about one seal species in particular by looking at our list of the 5 largest marine animals in the world.

Sea lions are distributed along various maritime coasts. For example, in the case of the Pacific, they are found in both North and South America. They live on various islands and archipelagos of central and northern Asia, New Zealand and Australia. Unlike seals, otariids make faster and shallower dives, and have shorter displacement areas. Although they tend to prefer cold water from the north or south depending on the species, some are located in tropical waters.

As for the behaviors of walruses, seals and sea lions, we look at them in more detail below.

The walrus is a very sociable animal and can form groups either small in number or with thousands of individuals. They usually move in company, but are segregated according to sex when it is not their mating season.

They tend to develop with a narrow ecological role that must have access to:

They mate in winter. When the males court, establish small areas in the water with several females to copulate with all of them. They make very loud mating noises to attract attention.

The members of the Phocidae family vary in behavior according to species. They are generally active hunters that feed on fish, squid, octopus, plankton, and penguins, among other prey.

Depending on the species, some can be more monogamous or polygamous. Few are strictly monogamous, but some live in large breeding colonies with various partners. However, they differ from the walrus and sea lion in that their congregations are not as numerous. Seals are expert swimmers, depending on the species their ability to stay underwater varies. Some have migratory behaviors.

The sea lion is a social animal, which congregates in large numbers on firm ground during mating season. The male arrives first and establishes a territory, which he defends aggressively. They only allow the presence of several females, with whom he will copulate. A curious feature is that females give birth to the young of the previous reproductive season, but begin the new heat cycle and copulation within days. Their diet is based on fish, crustaceans, octopus and squid.

If you want to read similar articles to Seal vs. Sea Lion vs. Walrus, we recommend you visit our Facts about the animal kingdom category.

Seal vs. Sea Lion vs. Walrus 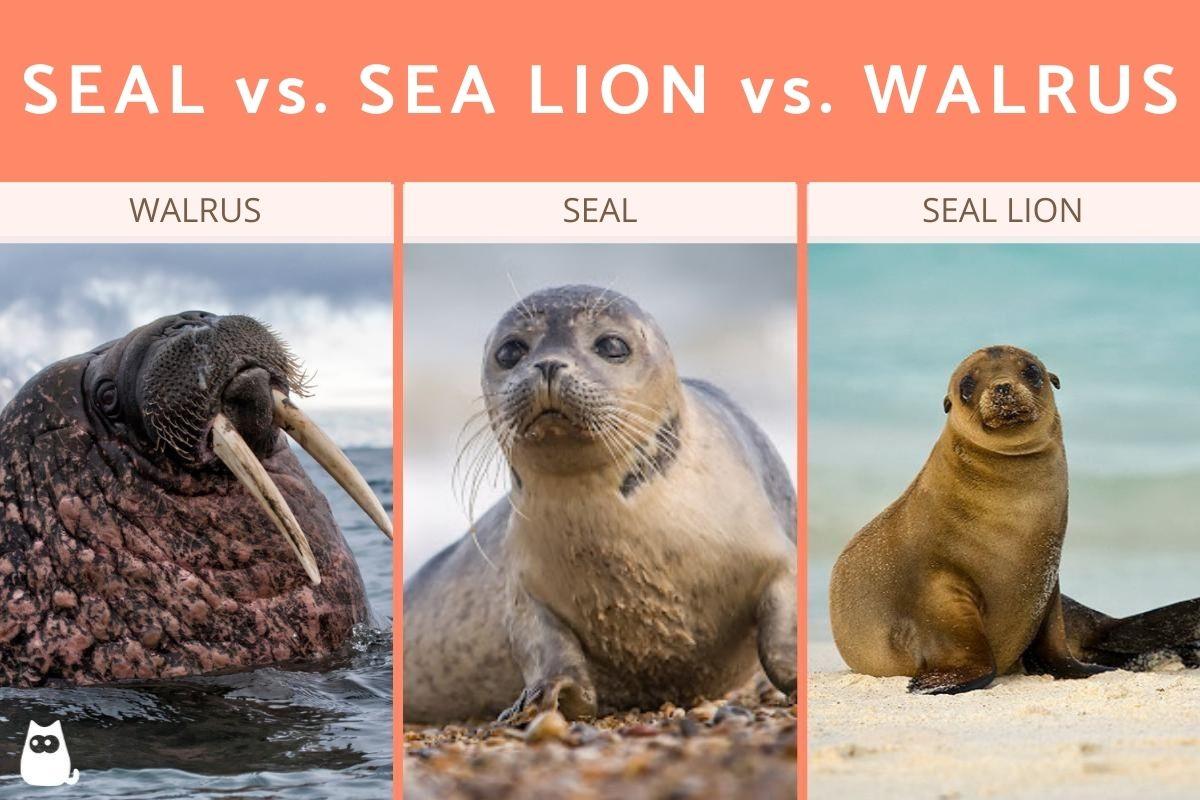 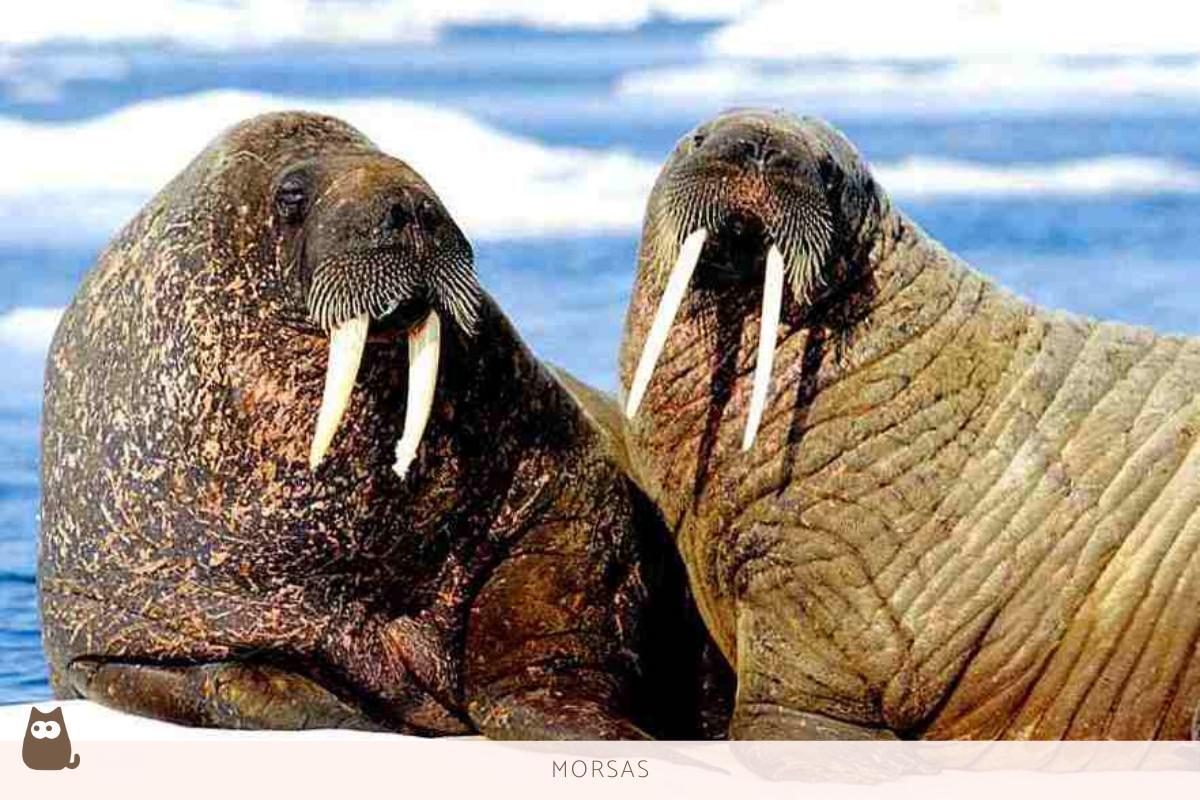 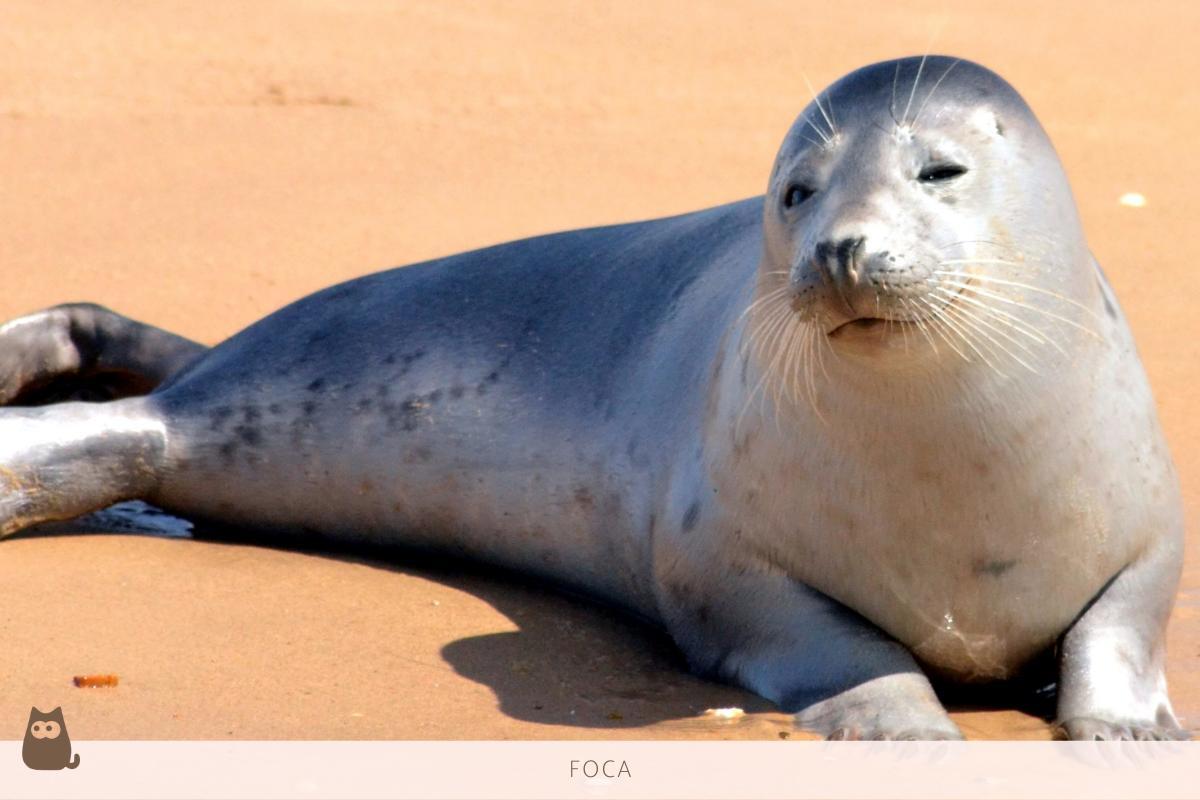 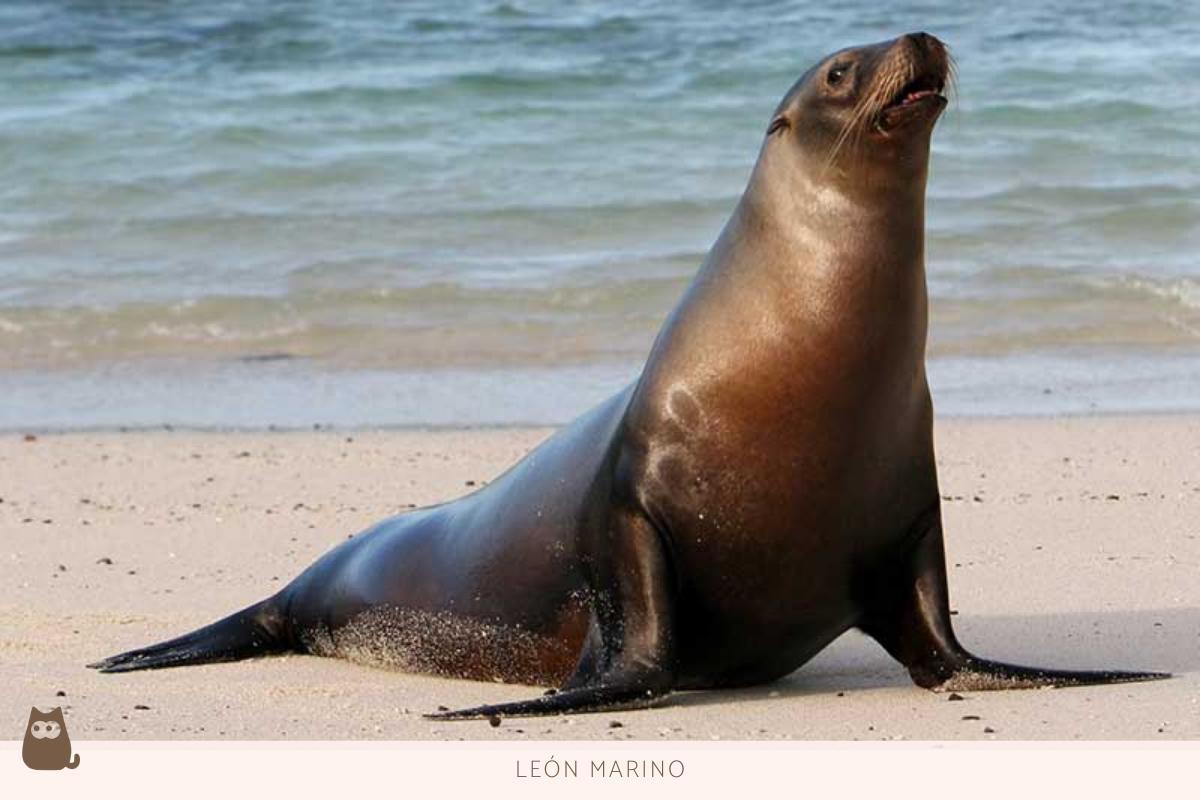 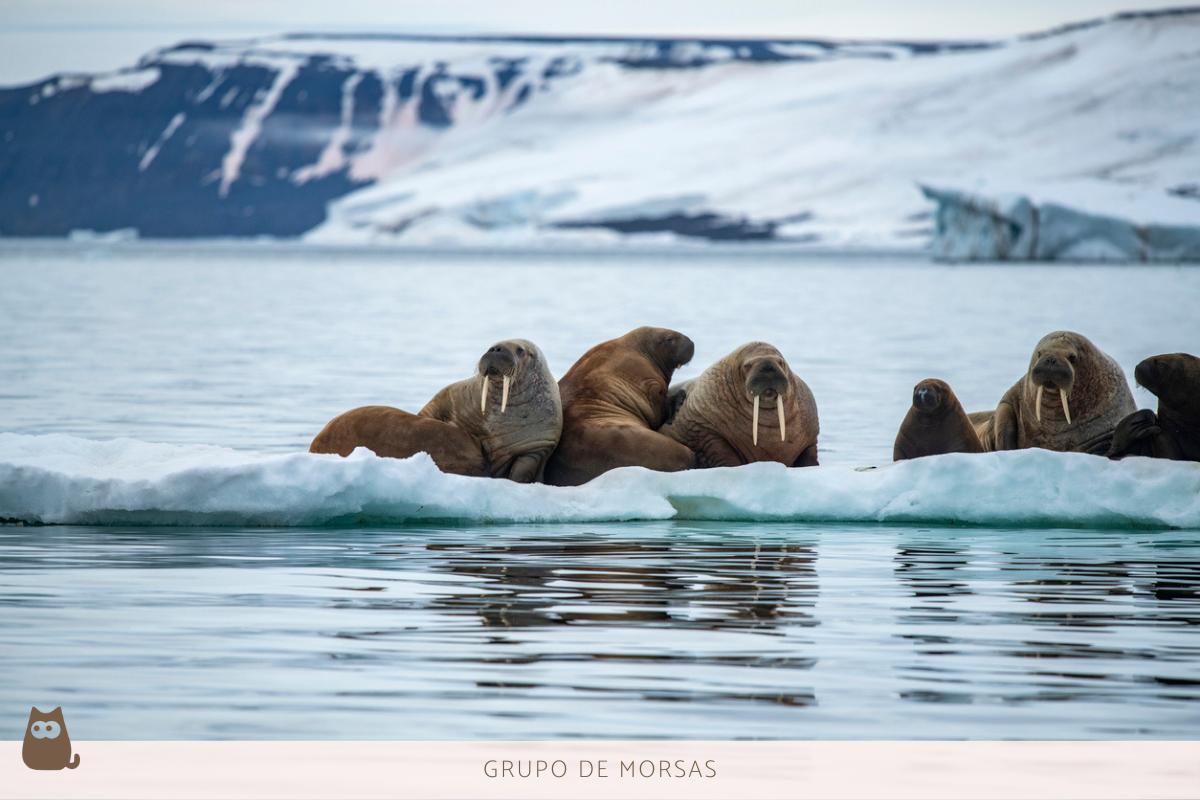