The Most Poisonous Amphibians in the World

By Nick A. Romero, Biologist and environmental educator. February 11, 2022

Amphibians belong to a group of vertebrates with specific characteristics, because from the point of view of structure, they are between fish and reptiles, and because of this, they can live both on and off land in most cases. There are currently three types of amphibians, commonly known as frogs and toads, salamanders, and a third group called caecilians. One of the peculiarities of these amphibians is their venom. Although they cannot inoculate themselves directly like other animals, this does not absolve them of their dangerousness.

In this AnimalWised article, we tell you all you need to know about the most poisonous amphibians in the world.

If you are interested in learning more about amphibians, keep reading this article on the differences between reptiles and amphibians.

Also known as the arrow frog or golden arrow frog, it is an extremely poisonous amphibian species. This species is endemic to Colombia, where it develops in tropical forest, especially in the litter of primary and secondary forest formations. It is classified as endangered by the International Union for Conservation of Nature (IUCN).

Adults are characterized by a single bright color, which can be green, yellow, orange, or white, with the most common color being yellow. It is considered the most poisonous frog in the world, although it is only between 47 and 55 mm long.

Its skin is full of substances known as batrachotoxins, which can cause muscle paralysis. A single frog contains between 1,000 and 1,900 micrograms of toxin, and it is estimated that as little as 2 µg can kill a human. Scientists suspect that the toxin present in the golden poison frog is due to the consumption of a beetle of the family Melyridae, genus Choresine , which is one of its prey.

This poisonous frog is native to Brazil, Colombia, Guyana, and Venezuela. It lives in leaf litter, on rocks, under logs or fallen branches, and near rivers in tropical forest. It is classified by the IUCN as Near threatened.

It is one of the largest frogs of its species, with a size of 3 cm (1.1 in) and 5 cm (2 in) and an average weight of 3 g (0.03ounces). The females are larger than the males. It has a characteristic bright coloration of yellow and black stripes on the body. This is known as aposematism, a defense mechanism by which a dangerous organism, or noxious organism, advertises its dangerous nature to potential predators. The predator, upon recognizing the dangerous organism as an unfavourable prey, ceases to attack it.

The toxins in this species accumulate in the skin and, although they can't attack humans, they can cause death if ingested. As with other species, the toxins are derived from food.

This amphibian belongs to the order Caudata and is native to North America, especially Canada and the United States, including Alaska. It lives in forests, grasslands, and open areas, on land under logs or rocks, but may also be found in water. It is classified as a Least Concern by the IUCN.

Its length can range from 12 cm (4.7in) to 20 cm (7.8 in). Its skin is rough and grainy. On the back it is dark, while in the abdominal area it is orange or yellowish. It is not usually harmful to humans if the venom is only touched, though it can kill a human if ingested.

The males of this large, robust frog are slightly larger than the females. The males attain a maximum snout-vent length of 18.0 cm (7.1 in), while the females reach a maximum length of 17.6 cm (6.9 in).

A nocturnal species, this species spends its time in burrows, under logs, and in leaf litter. It defends itself by secreting noxious skin oils and by posturing, inflating the lungs and elevating the body on its four legs. It emits a high-pitched cry when grasped.

The frog, also known as the two-colored poison frog, is endemic to Colombia, where it lives in litter near streams in lowland and foothill areas. It is classified by the IUCN as threatened with extinction.

Its typical coloration is bright golden yellow, with black legs, although this pattern can vary. The toxicity of this amphibian is quite high, being capable of killing a human as it affects the nervous and muscular system. The frog is commonly heated over a flame so it can "sweat" liquid poison for hunting darts.Captive-raised species of dart frogs are not toxic. They need chemicals found only in their wild food sources, mainly insects, which they cannot obtain from their captivity food sources.

This venomous amphibian is also endemic to the Colombian region and is normally found on the ground of tropical rain forests, among fallen limbs or leaf litter. It is classified as critically endangered by the IUCN. A growing number of them seem to be disappearing as their rainforest habitat continues to be destroyed.

It is small, reaching a size of 2.5 cm (0.9 in) to 3.8 cm (1.4 in). Harlequin poison frogs have a variety of color morphs that differ from valley to valley in their native range. The base color is a bright orange, with black webbing wrapping around the entire body.

This animal produces a venom that can kill small animals and even humans if it enters the bloodstream.

This venomous amphibian species is native to countries such as Brazil, French Guiana, Guyana, and Suriname, where it inhabits tropical forest soils. It is classified as a Least Concern by the IUCN.

It generally grows to 4 cm (1.5 in) to 5 cm )1.9 in) in size, although there are females that grow up to 6 cm (2.3 in). It is bright blue with yellow stripes, in addition it may be black or blue with yellow or black spots toward the extremities. Some specimens may also have combinations of white, black and blue.

The toxins of this from cause animals that feed on the them to develop an association between their vivid colours the pain and discomfort they experience when eating them, which is more than enough to discourage most animals from feeding on them.

Local tribes use D. tinctorius for decoration, pulling feathers from young parrots and rubbing the frogs on their exposed skin. The toxin causes yellow or red feathers to grow instead of green. The feathers of these altered birds are highly prized by indigenous tribes.

This species is native to the Americas, although it is currently introduced in other regions. It is terrestrial, but develops in areas with plant cover and adequate moisture, including urban areas. The cane toad was historically used to eradicate pests from sugarcane, hence its common name. Normally, they live for 10 to 15 years in the wild. However, they can live much longer in captivity, with one specimen reportedly living for 35 years. It is classified as a Least Concern by the IUCN.

The skin is olive brown and tuberculated, while the abdominal region is typically lighter. It is up to 23 cm (9 inches) in length, though often measures less. This amphibian produces a series of substances known as bufotoxin. These substances are quite toxic and can cause death to children and pets if ingested.

Learn what to do in case your dog accidentally licks one of this frogs by reading our article on dog poisoning.

This amphibian is native to Europe, where it develops in different types of habitats such as forests, meadows, rocky slopes, scrubby areas with moisture and river courses. To develop larvae, they need clean water in their habitat, such as a small brook or pond. It is classified as a Least Concern by the IUCN.

Its color is a warning to predators that it has poisonous glands in its body. A fire salamander's poison glands are mainly found near the head and along the dorsal skin surface. The coloration of the skin around these glands usually corresponds to their location. A primary alkaloid toxin of the fire salamander, samandarin, causes strong muscle convulsions and hypertension. The skin secretions contain compounds that may be effective against bacterial and fungal infections of the epidermis; however, some could be dangerous to humans.

A member of the Salamandridae family, this amphibian is native to China and is found in a variety of wet and temperate habitats that include ponds in forests, mountainous regions, and fields. It is classified as a Least Concern by the IUCN.

It is a small newt that does not grow larger than 10 cm (3.9 in). It is usually bright orange, indicating its toxicity. It is not usually fatal, but consumption of certain amounts of its toxins can lead to medical problems for humans.

Other poisonous amphibians in the world

In addition to those mentioned, there are other amphibians poisonous to humans and animals. This applies to other species, members of the genera Phyllobates and Dendrobates. However, so far we have mentioned only amphibians from the group of frogs, toads, salamanders and newts, but what about the wrens?

Toxic substances have also been detected in caecilians, both in the body and in the mouth region. For example, a protein was identified in the ringed beetle (Siphonops annulatus) that is also found in other venomous animals, such as the rattlesnake. Nevertheless, biochemical studies are lacking to know its effects in detail.

If you want to read similar articles to The Most Poisonous Amphibians in the World, we recommend you visit our Facts about the animal kingdom category.

The Most Poisonous Amphibians in the World 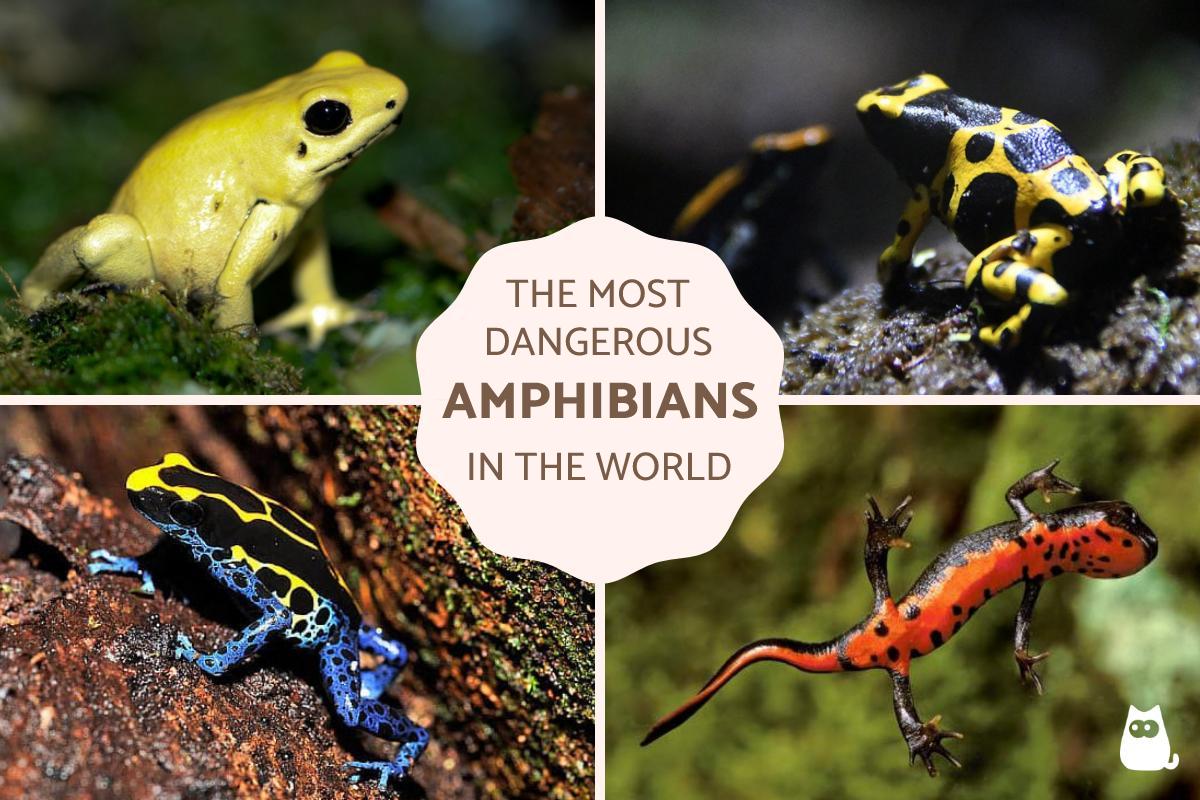 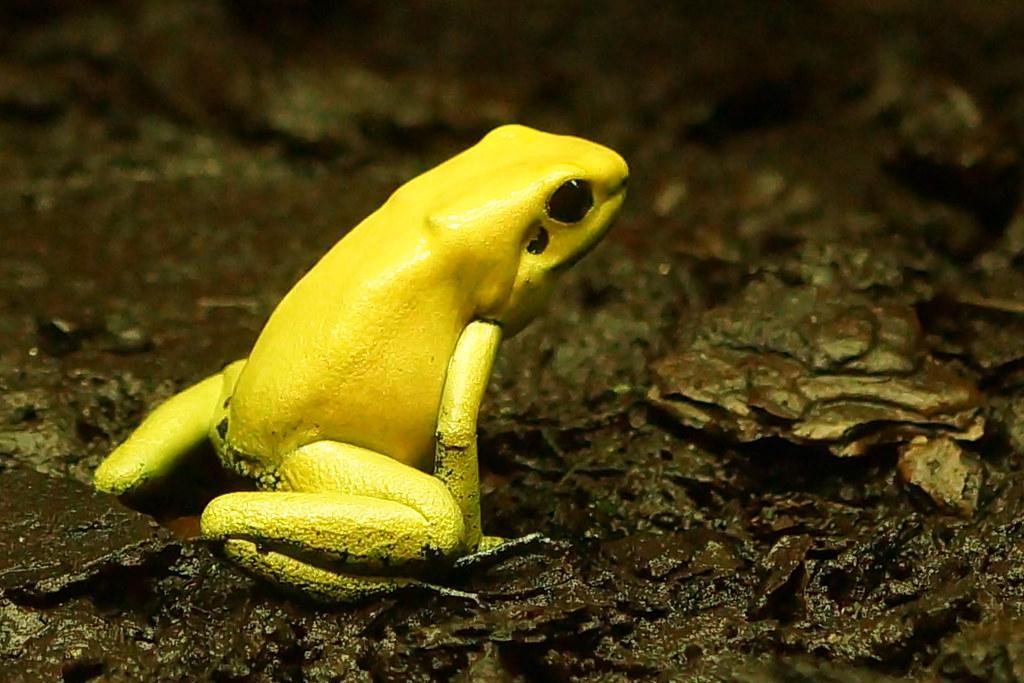 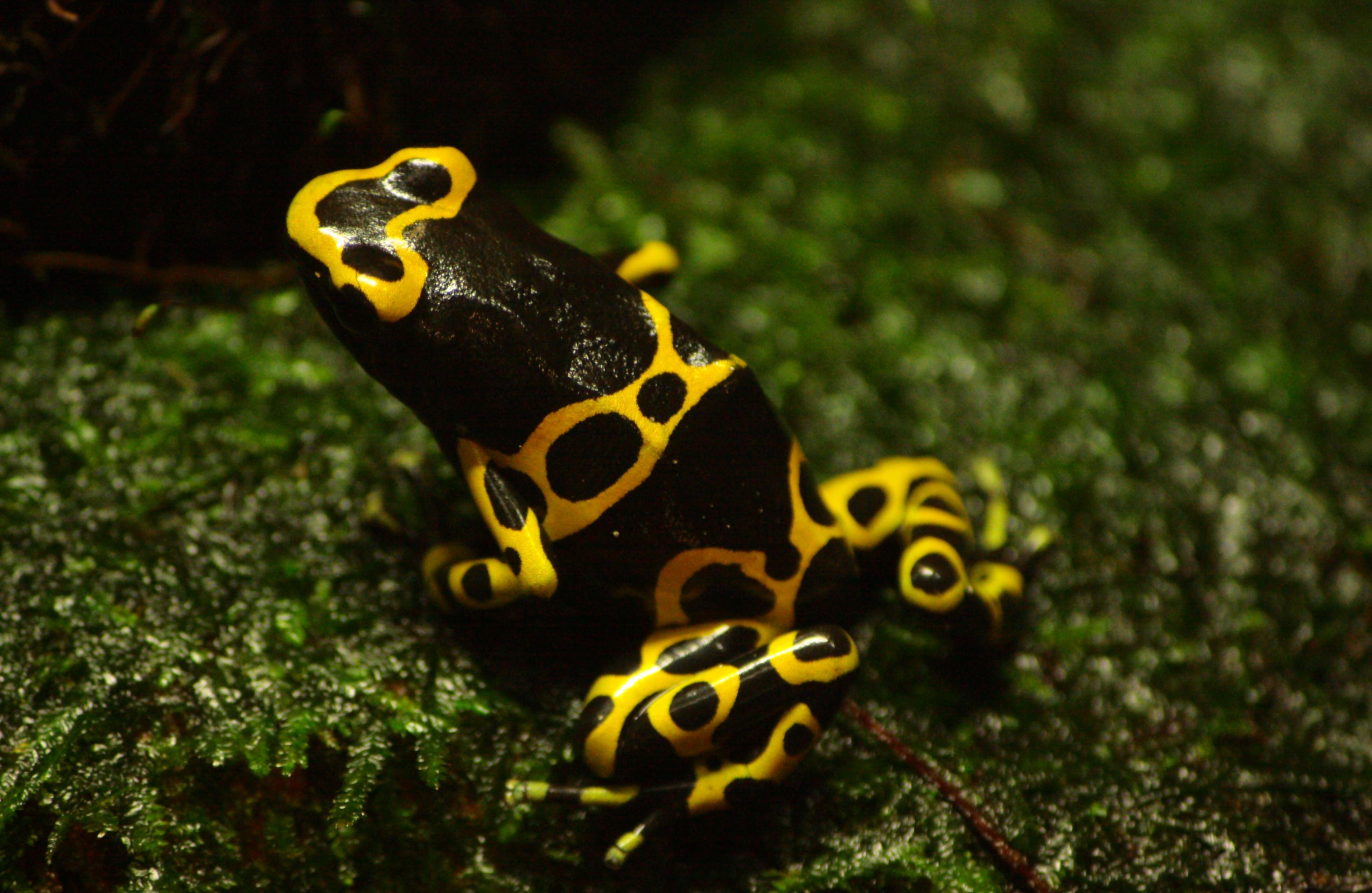 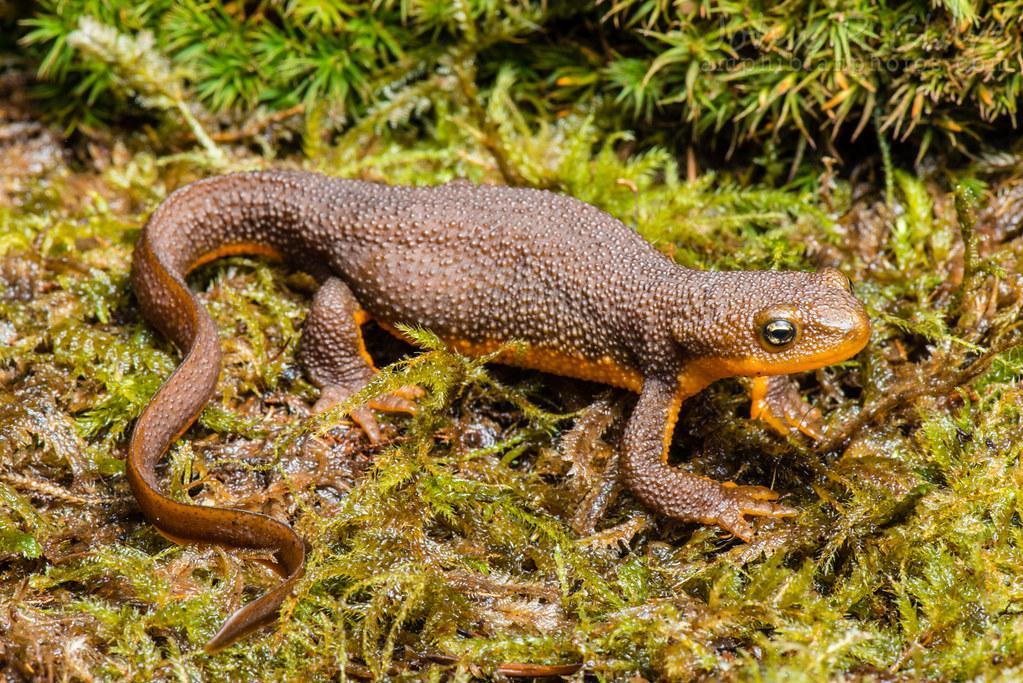 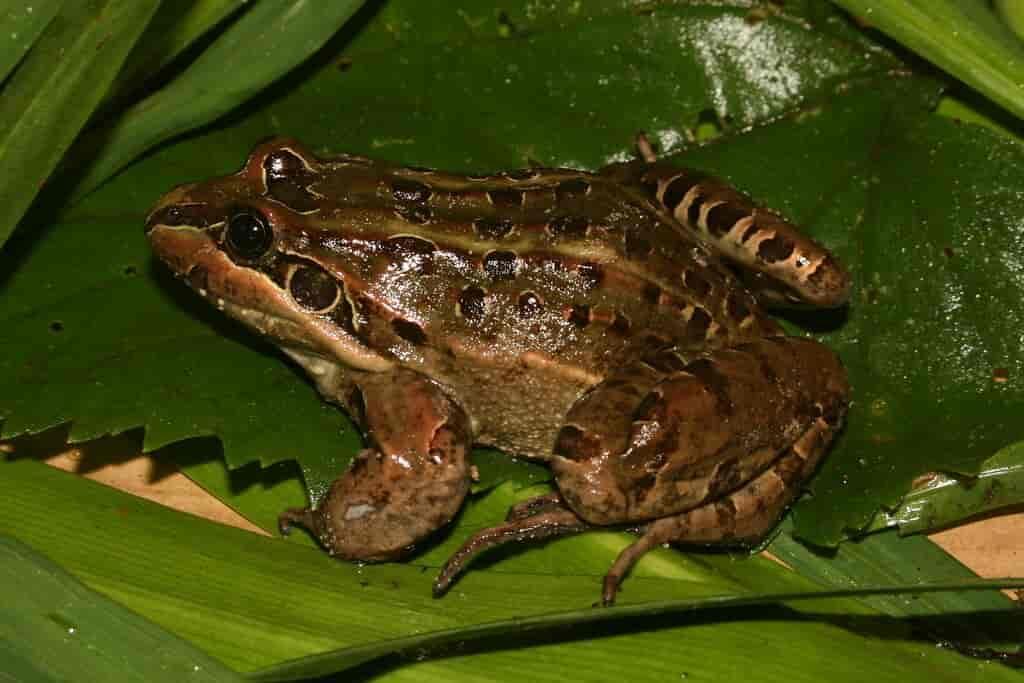 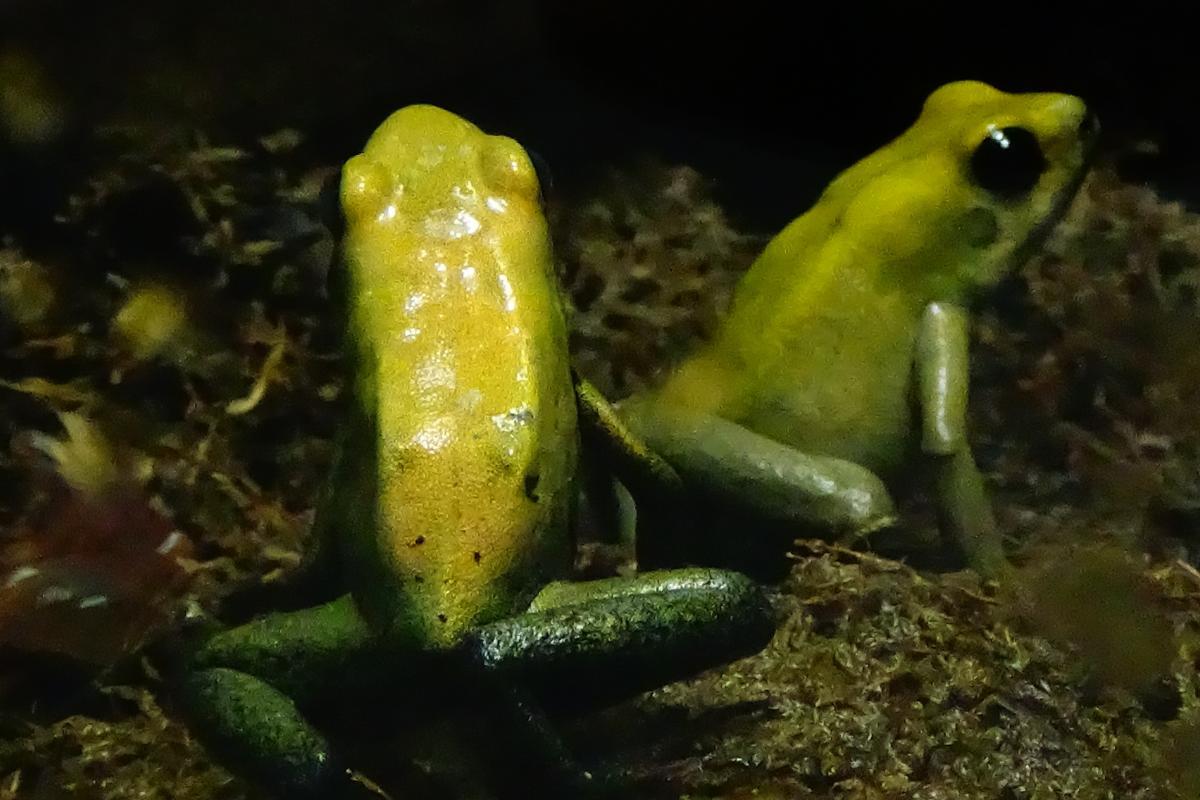 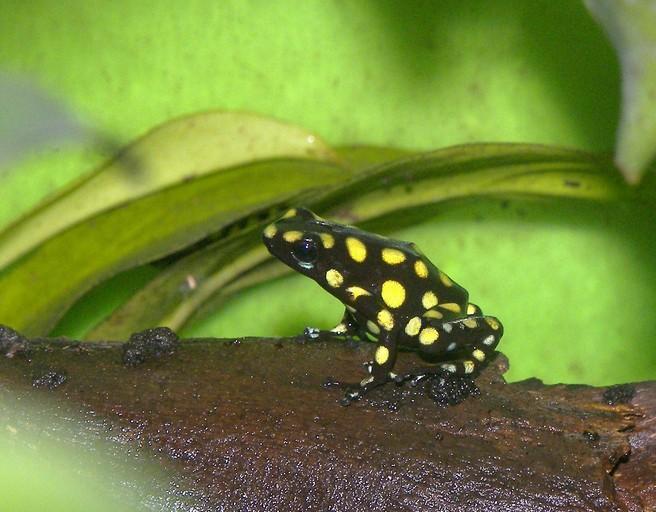 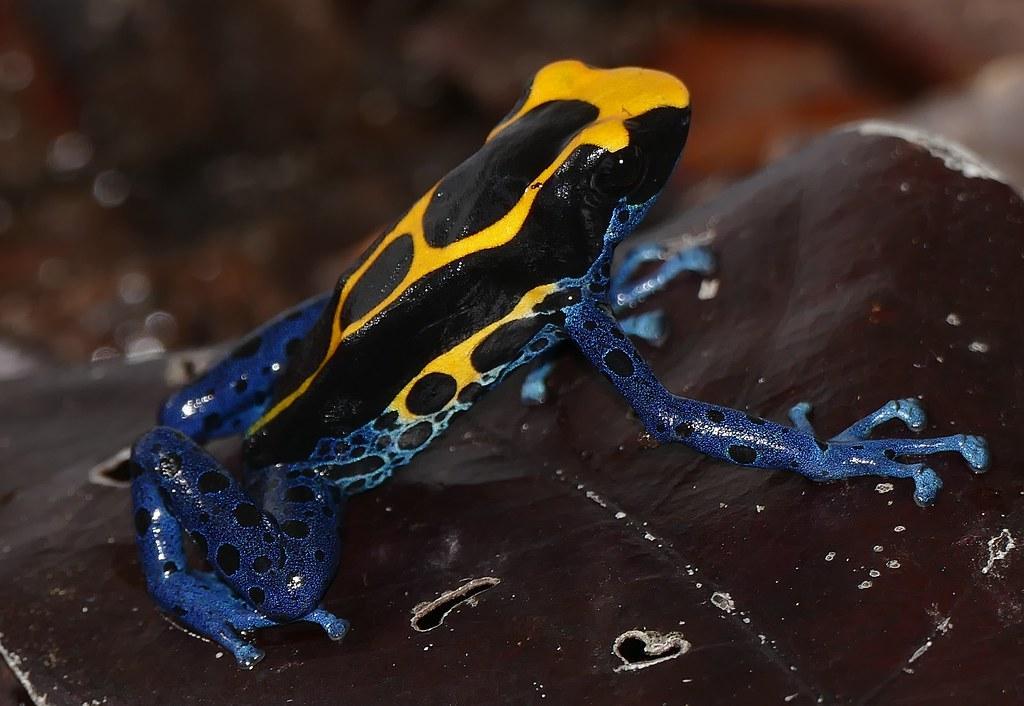 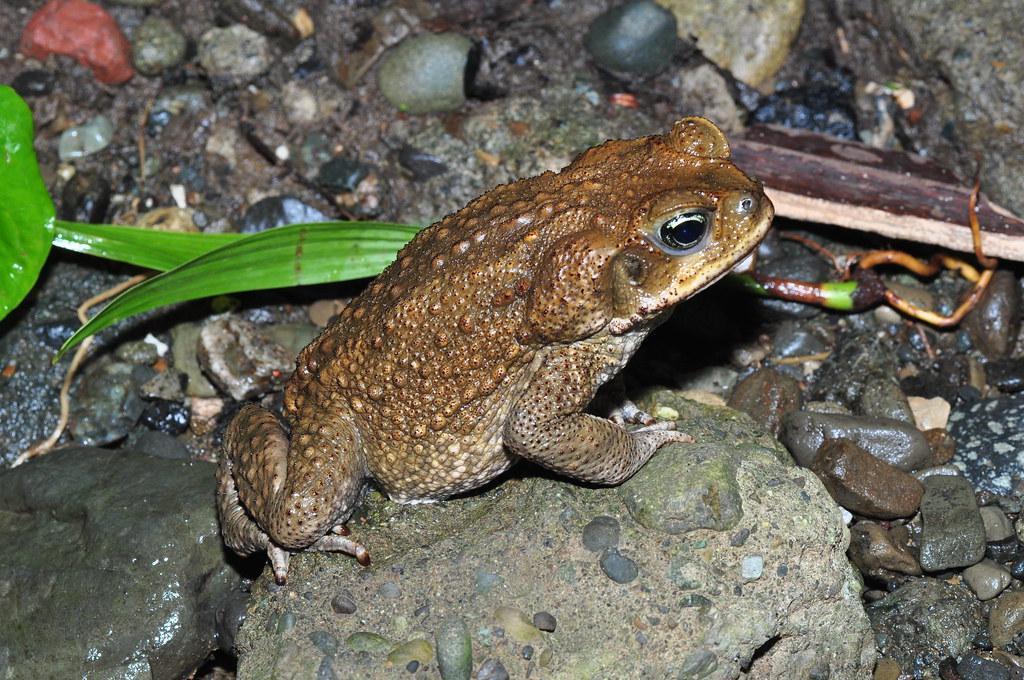 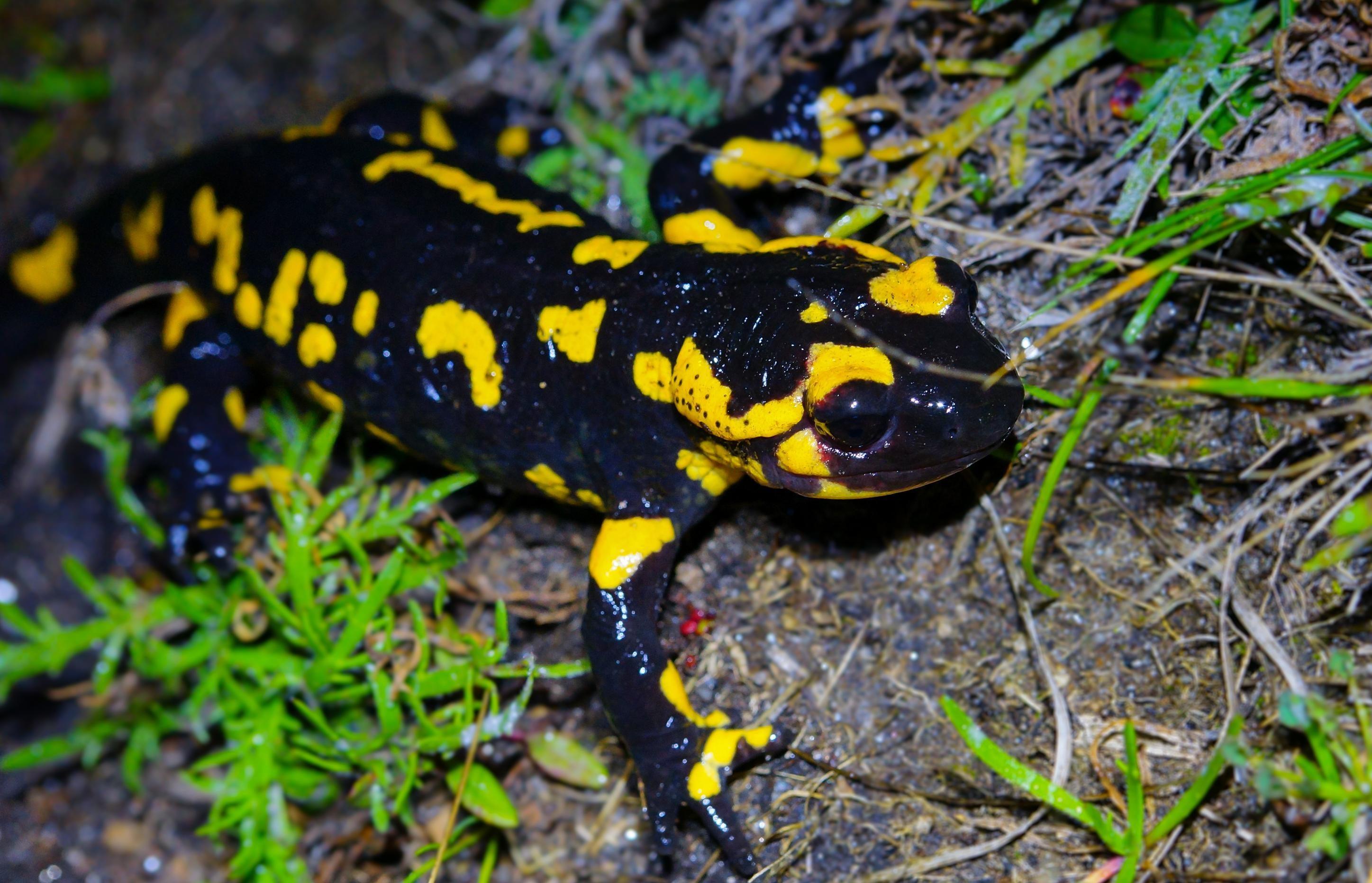 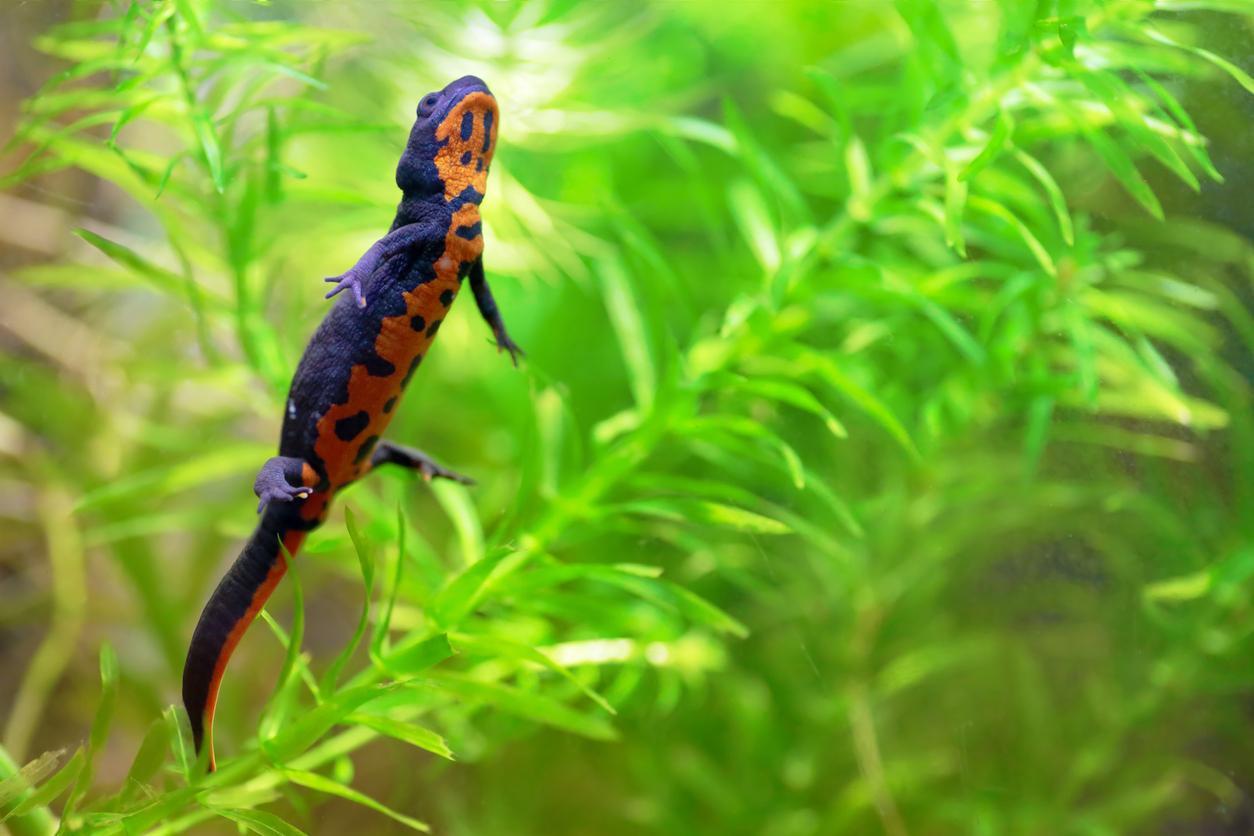 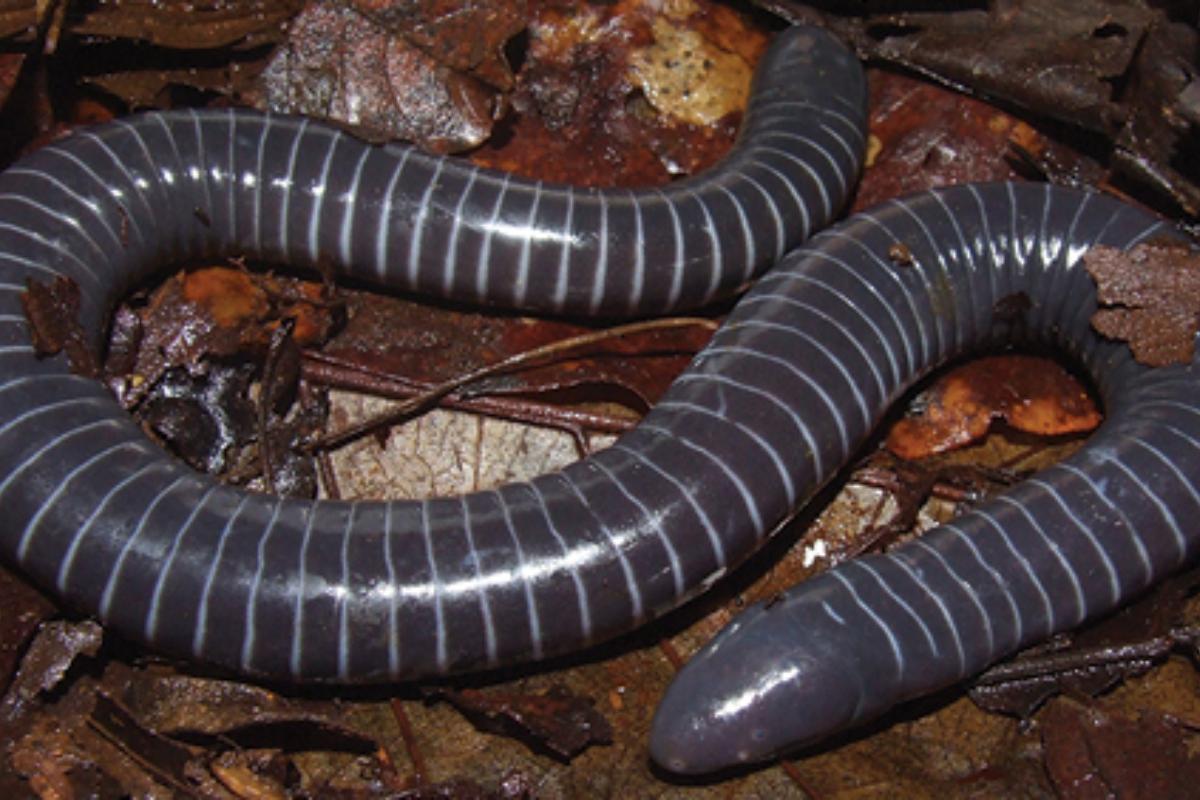