By Nick A. Romero, Biologist and environmental educator. September 15, 2022

The word "armadillo" comes from Spanish and means "the little one with the armor," alluding to the plates of bone that cover the back, head, legs, and tail of these peculiar creatures. Armadillos are the only living mammals that wear this type of protection. These animals, closely related to anteaters and sloths, usually have small eyes and a pointed or shovel-shaped snout. They vary greatly in size and color, and there are over 20 species of armadillos.

In the following AnimalWised article, you will learn everything you need to know about the different types of armadillos, as well as some fascinating facts about these animals.

You may also be interested in: All Types of Cougars
Contents

This species is native to South America and is found in countries including Brazil, Colombia, Peru, Ecuador, and Venezuela.

It is one of the largest armadillo species, with an average size of 83 to 106 cm (33 to 42 in) from head to tail and a weight of about 10.5 kg (23 lb). Its characteristic feature is the presence of rows of scales on the hind legs.

Depending on the region, it can live in humid lowland forests and savannas with wooded areas. D. kappleri has a very large range and is present in a number of protected areas.

The greatest threat to it is deforestation, as it cannot live in the open countryside. As for its conservation status, it is classified in the category of the least endangered species by the IUCN.

This armadillo species is endemic to Peru and little known, in fact its range is not well known. So far it is known to occur in the southwestern Andes of the country and in the north in the department of Amazonas.

It is estimated that this armadillo species grows to about 50 cm (23 in) in size. It is fascinating to note that this armadillo, in spite of having the typical carapace on its body, which includes the head, snout, and tail, is covered in hairs that emerge from its pores, making it virtually invisible.

The conservation status of this species is unknown due to a lack of data.

The Greater fairy armadillo is the only species of the genus Calyptophractus. It is native to Argentina, Bolivia, and Paraguay and inhabits areas with sandy soils, patches of vegetation and near populated centers.

Like all armadillo species, the Greater Armadillo is a good burrower, which is why it retreats to underground burrows. The greater fairy armadillo is a small species, growing to a length of from 140 to 175 mm (5.5 to 6.9 in) with and weighing up to 1 kg (2.2 lb).

Its peculiarity is that the pelvic carapace is completely connected to the spine and pelvic bones, while the soft dorsal carapace with mobile dorsal ligaments is fused to the skin. On the other hand, the fur on the back is very sparse, but abundant in the ventral region.

When disturbed, it can quickly burrow in and block the entrance to its burrow with its rearmost plates.

The conservation status of this species is unknown due to a lack of data.

This armadillo species is native to Argentina, Bolivia, Chile, and Paraguay and inhabits different types of habitats such as grasslands, savannas, forests, and farmlands.

It is one of the largest and most abundant armadillos in South America. The average individual reaches a body length of 26 to 34 cm (10 to 13 inches) and a weight of 1-3 kg (2.2-6.6 lb) when fully grown. As in the previous species, the ventral region is abundantly hairy, but the rest of the body is sparsely hairy.

The armadillo can extract oxygen from the surrounding soil particles with the help of specially developed membranes in its nose, without inhaling any of the soil itself

The Big hairy armadillo is considered a low concern species by the IUCN due to its large population and widespread habitat.

The pink fairy armadillo is the smallest armadillo species of all. It is native to Argentina and grows in dry grasslands and sandy plains with scrubby vegetation. It is only found in soils where it can burrow, because it is a fossorial species, which means that it burrows and lives mainly underground.

The pink armadillo is 90-115 mm long and typically weighs about 120 g (4.2 ounces). Its body is covered with fur and the carapace does not cover the entire body, but only the upper part and half of each side.

On its front and hind legs, the armadillo has two massive sets of claws that allow it to dig burrows very quickly. This species is also known as a "sand swimmer" because it can burrow through the ground with the speed of a fish in the sea.

The IUCN considers it in the category of missing data, so it is unknown if it is endangered.

Known as Pichi, this armadillo is native to Argentina and Chile. It inhabits desert ecosystems, Patagonian steppes, areas with xerophytic vegetation, thickets and grasslands, but always with sandy soils.

A characteristic carapace covers the body, with hairs extending under and around it. Pichis are the only armadillos that hibernate. Like many other hibernating animals, they lay down considerable fat reserves before retreating to their winter dens, where they remain from May to August.

It is classified as near threatened, as its population is in decline, according to the IUCN.

If you want to learn more about the process of hibernation, continue reading this article, where we explain the differences between hibernation and brumation.

The Llanos long-nosed armadillo is native to Colombia and Venezuela, where its habitat is the intermittently flooded grasslands of the llanos. It is very sparsely haired and can weigh up to 22 pounds (9.5 kg) and grow to about 2.1 feet (60 cm) long.

It lives in dense cover near limestone formations. Like many other armadillos, it feeds on ants. The litter size of this species is usually four and all the embryos develop from one zygote, resulting in identical quadruplets.

It has also been classified as near threatened by the IUCN due to increasing population declines.

The armadillo is native to Argentina, Brazil, Paraguay, and Uruguay, where it develops in lowland areas, submontane forests, open areas, and secondary forests.

It is larger than the closely related southern naked-tailed armadillos. Adults of the larger species reach a head-torso length of 41 to 49 cm and a tail 15 to 20 cm long.

Like other armadillos, large naked-tailed armadillos feed on ants and termites and sleep in burrows, which they often dig in termite mounds.

If you want to learn more about animals that eat insects, do not miss this other article about entomophagous animals, where we discuss their main characteristics and some fun facts.

The nine-banded armadillo (Dasypus novemcinctus) is native to North, Central, and South America, making it the most widely distributed armadillo. It is found in many habitats, from mature and secondary rainforests to grasslands and dry scrub.

Its ancestors originated in South America and remained there until the formation of the Isthmus of Panama, which allowed them to cross into North America as part of the Great American Interchange.

When alarmed, nine-banded armadillos can flee with surprising speed. They can also jump up to 3-4 feet (91-122 cm) straight into the air.

A single female can give birth to up to 56 young during her lifetime. This high reproductive rate is one of the main reasons for the rapid expansion of the species. It is also considered to be of little concern by the IUCN.

This peculiar armadillo species is distributed in countries such as Argentina, Colombia, Ecuador, Paraguay, Peru and Venezuela, among others. It inhabits tropical rainforests near water, open forests or grasslands. It is distinguished from other species by its enormous size, as giant armadillos typically weigh about 18.7-32.5 kg (41-72 lb) when fully grown. The typical length of the species is 75-100 cm (30-39 in).

Giant armadillos use their large front claws to dig for prey and tear up termite mounds. The diet consists mainly of termites, but ants, worms, spiders, and other invertebrates are also eaten.

Giant armadillos are characterized by their carapaces, which are black or gray in the dorsal part, while lighter in the ventral part.

Unfortunately, it is classified as endangered by the IUCN, as its population continues to decline.

We have a detailed article on Where do giant armadillos live if you'd like to know more about their habitat.

Other types of armadillos

As we mentioned at the beginning, there are 20 species of armadillos. Therefore, we present below the remaining armadillo species identified to date:

Now that you have learned about the different types of armadillos, read on in this other article, where we discuss whether you can keep an armadillo as a pet.

If you want to read similar articles to Types of Armadillos, we recommend you visit our Facts about the animal kingdom category. 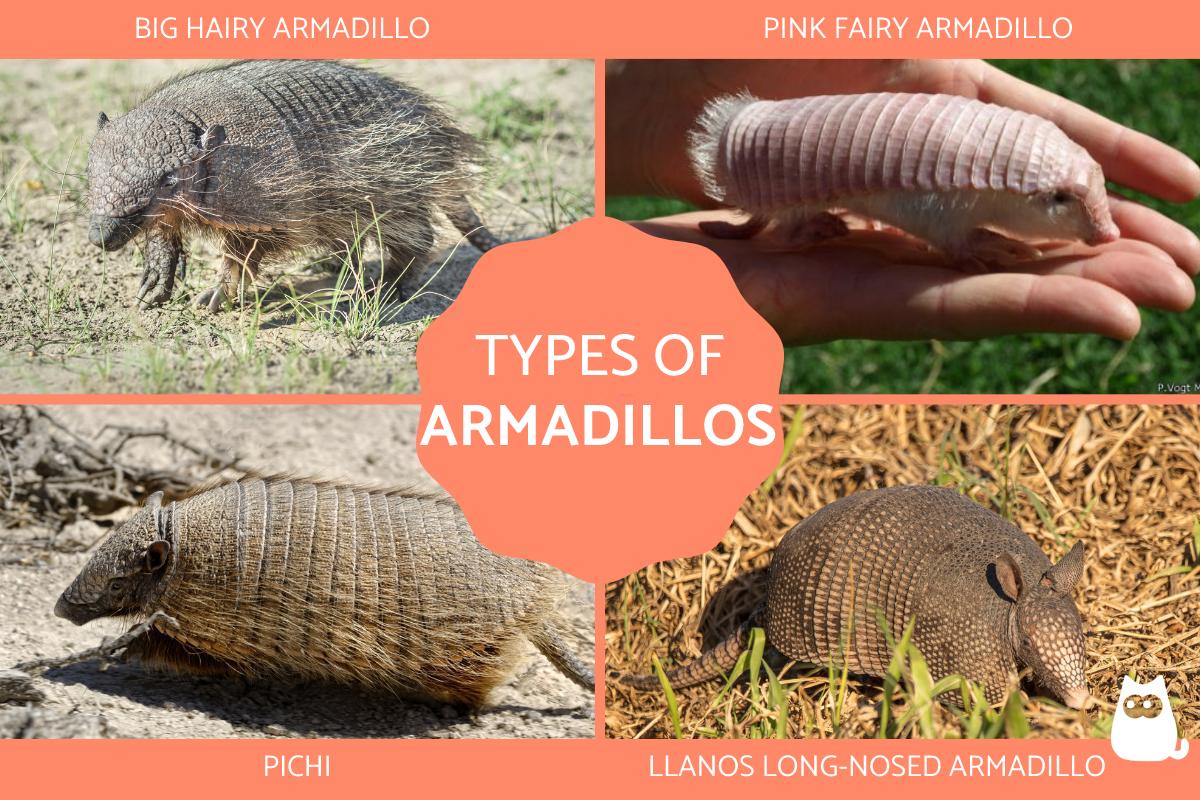 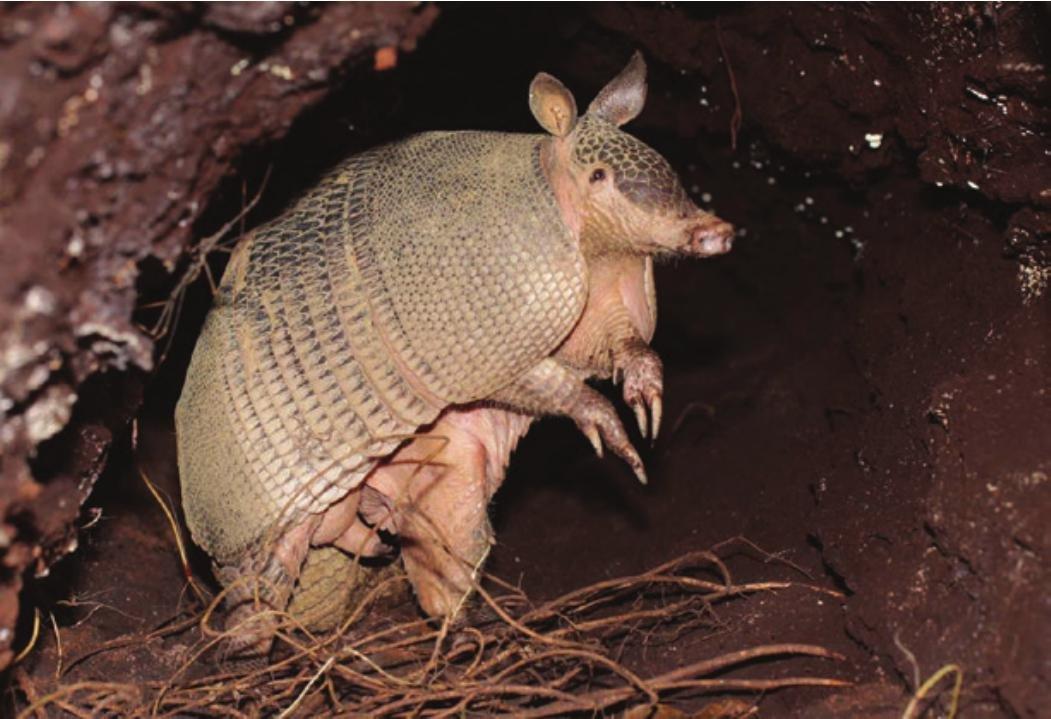 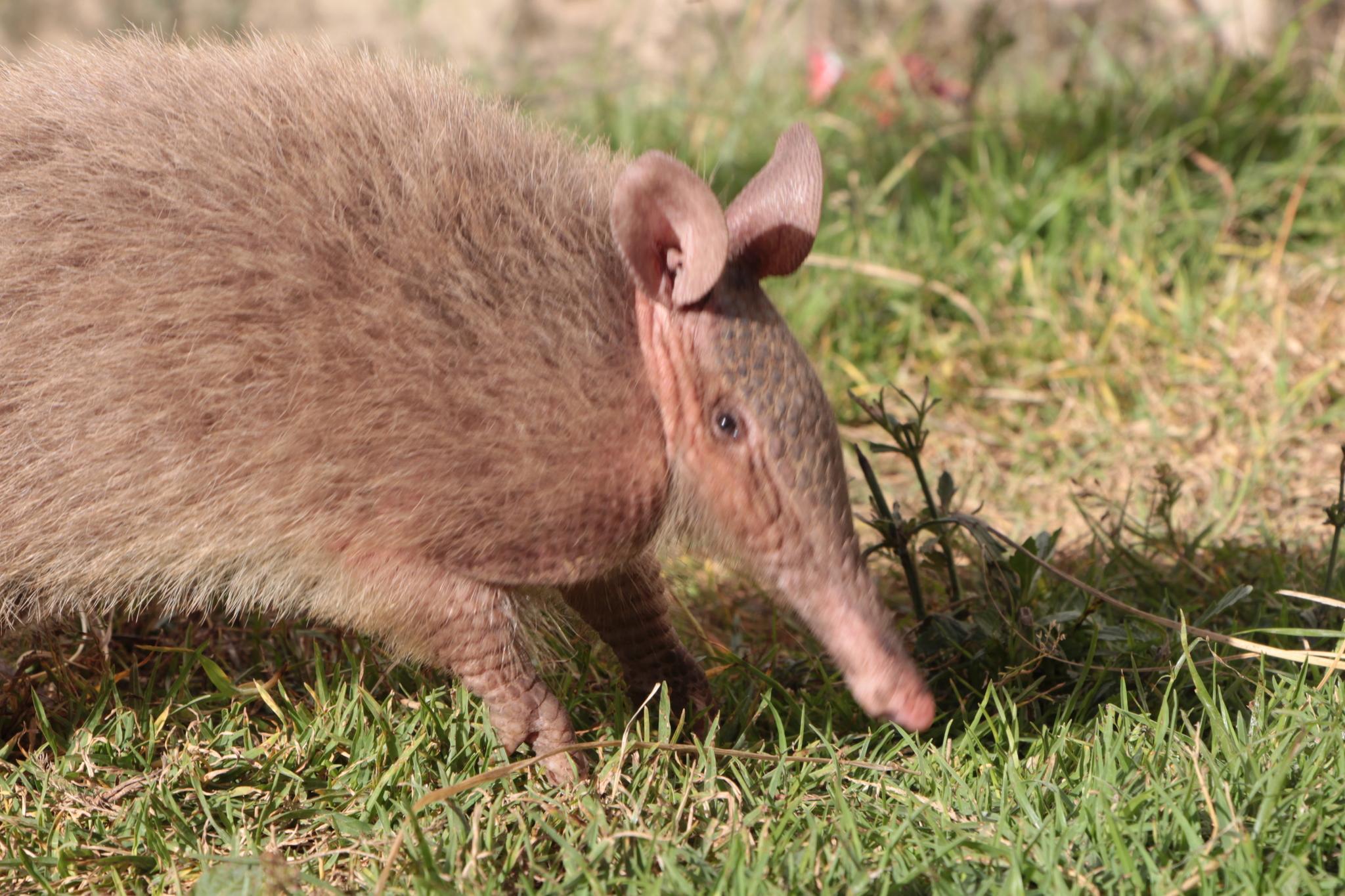 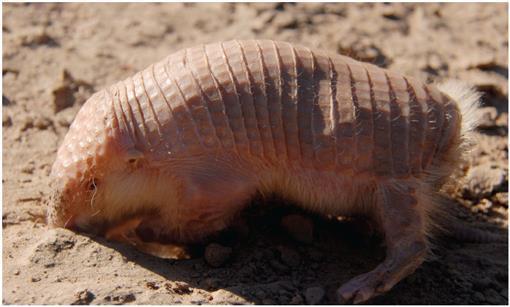 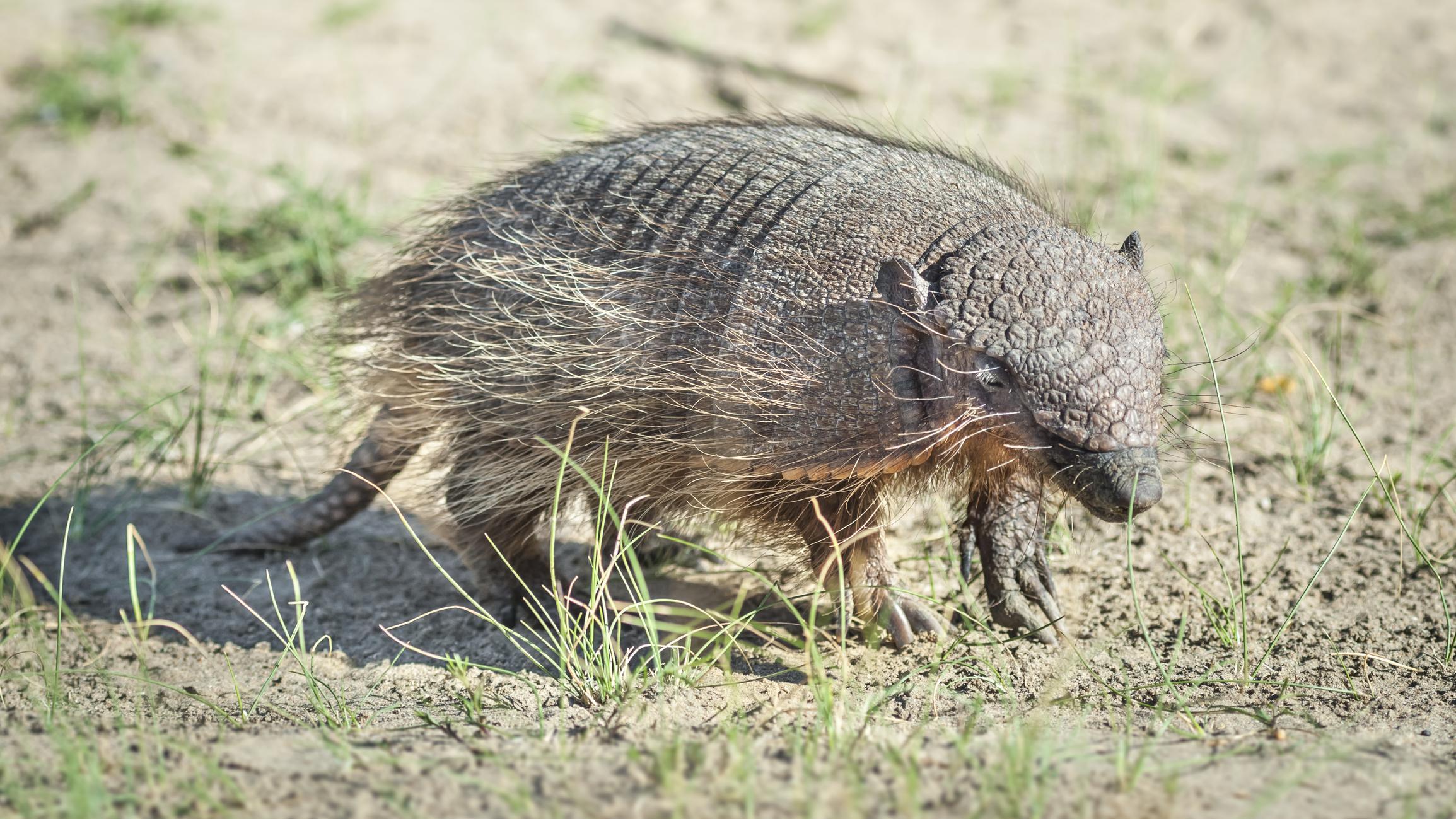 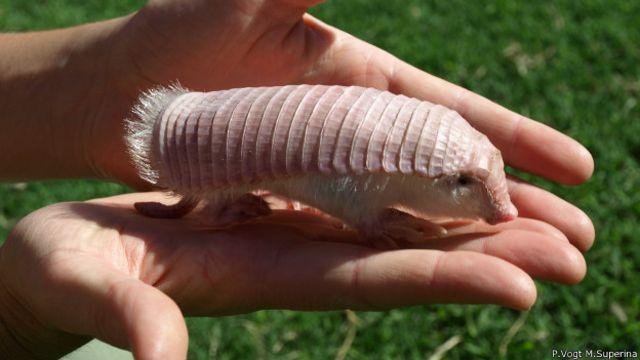 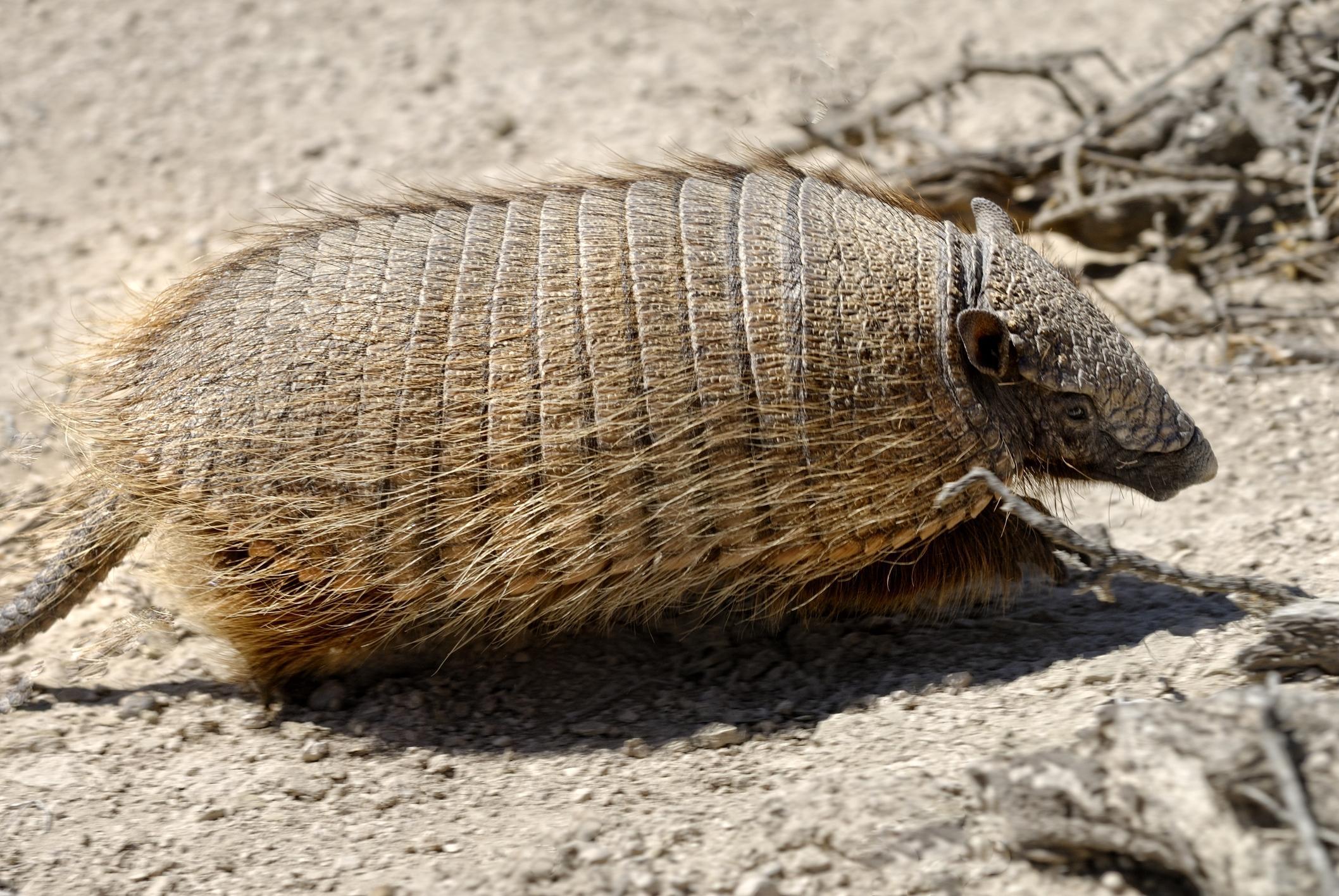 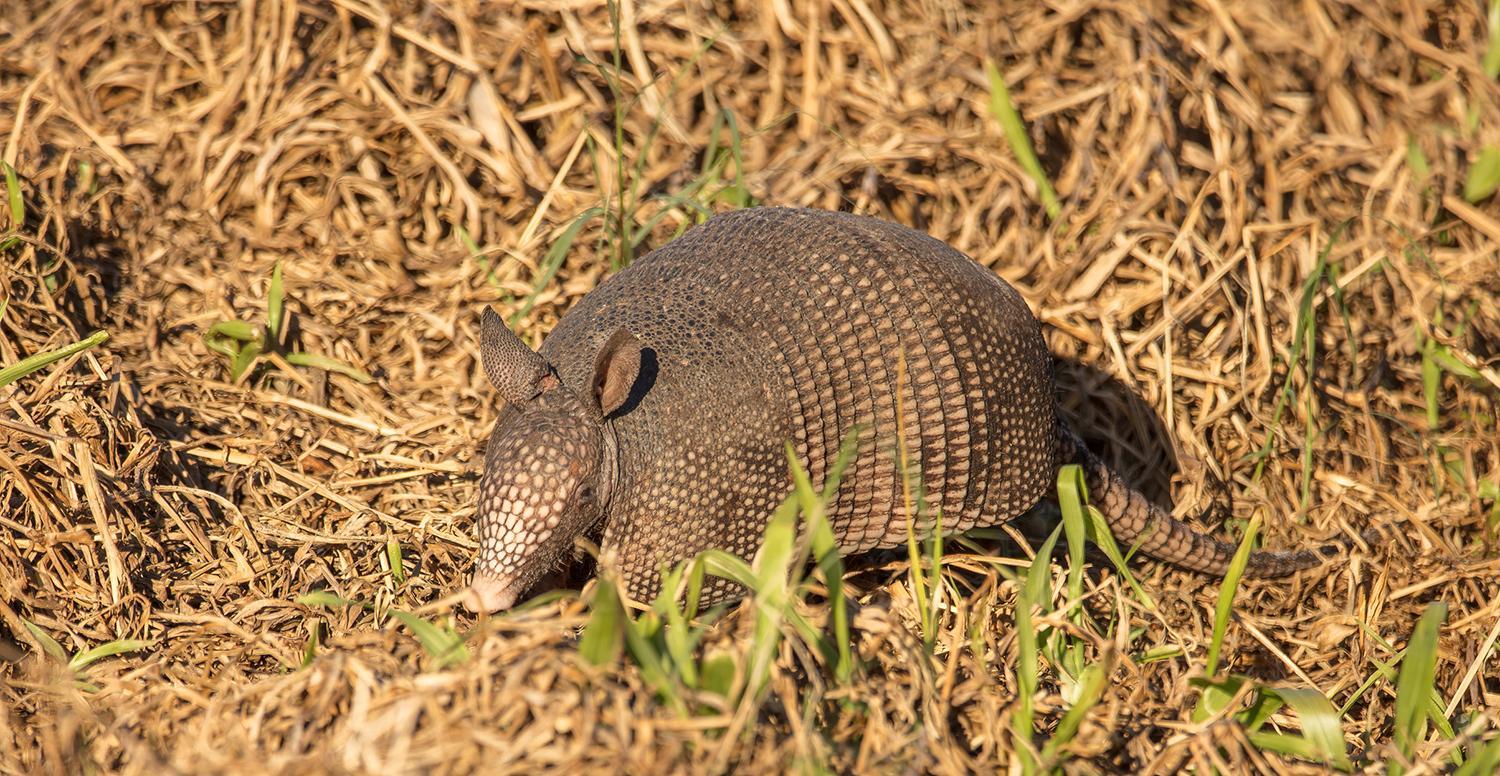 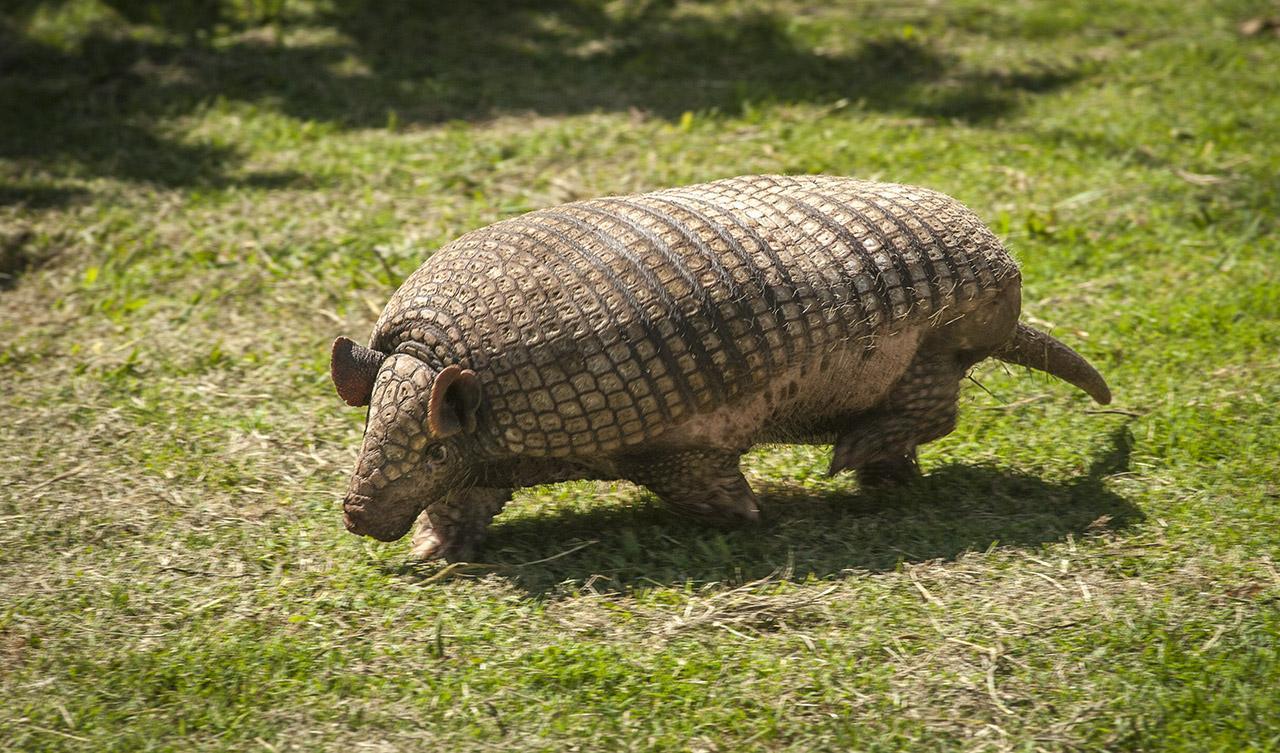 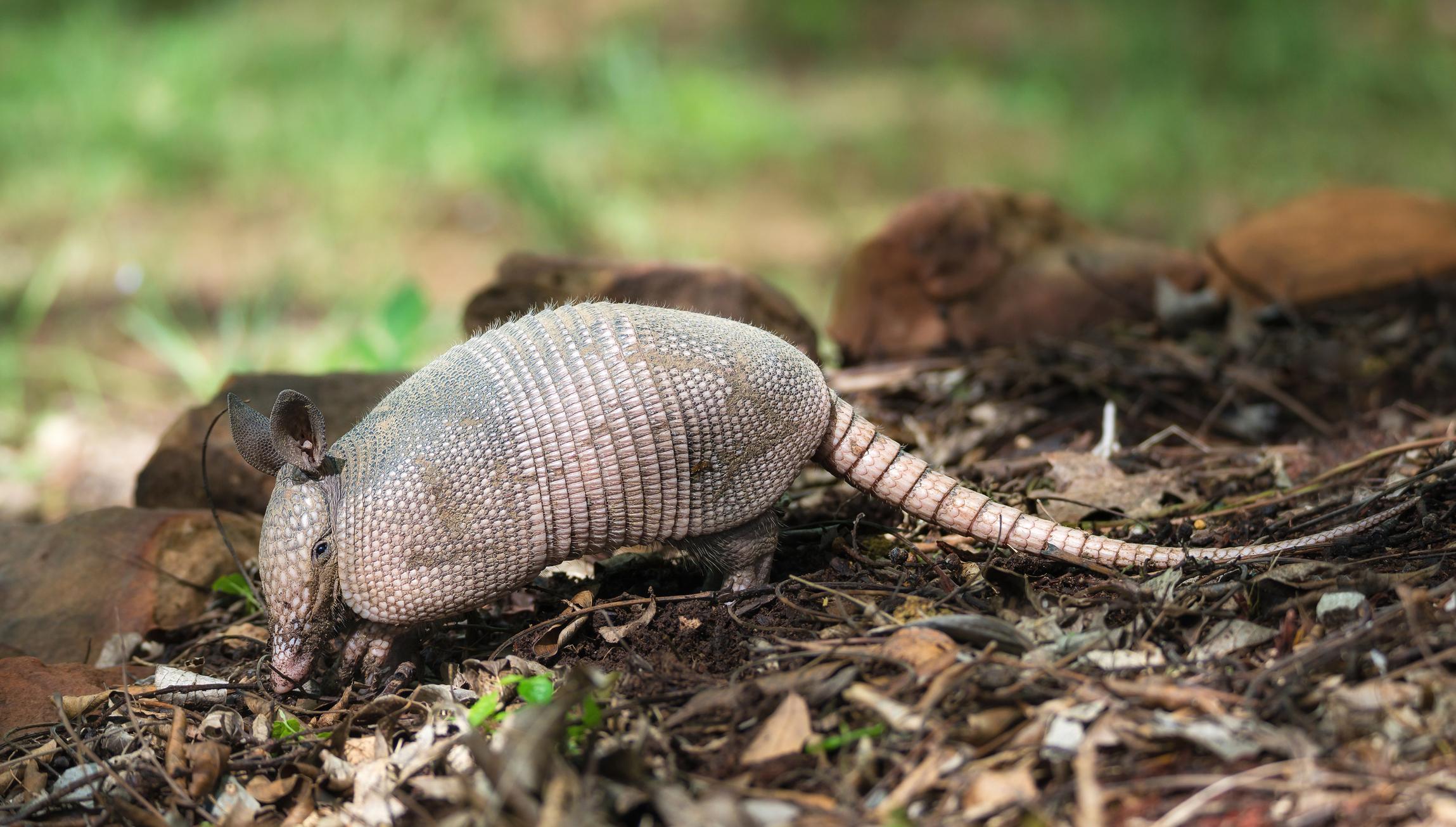 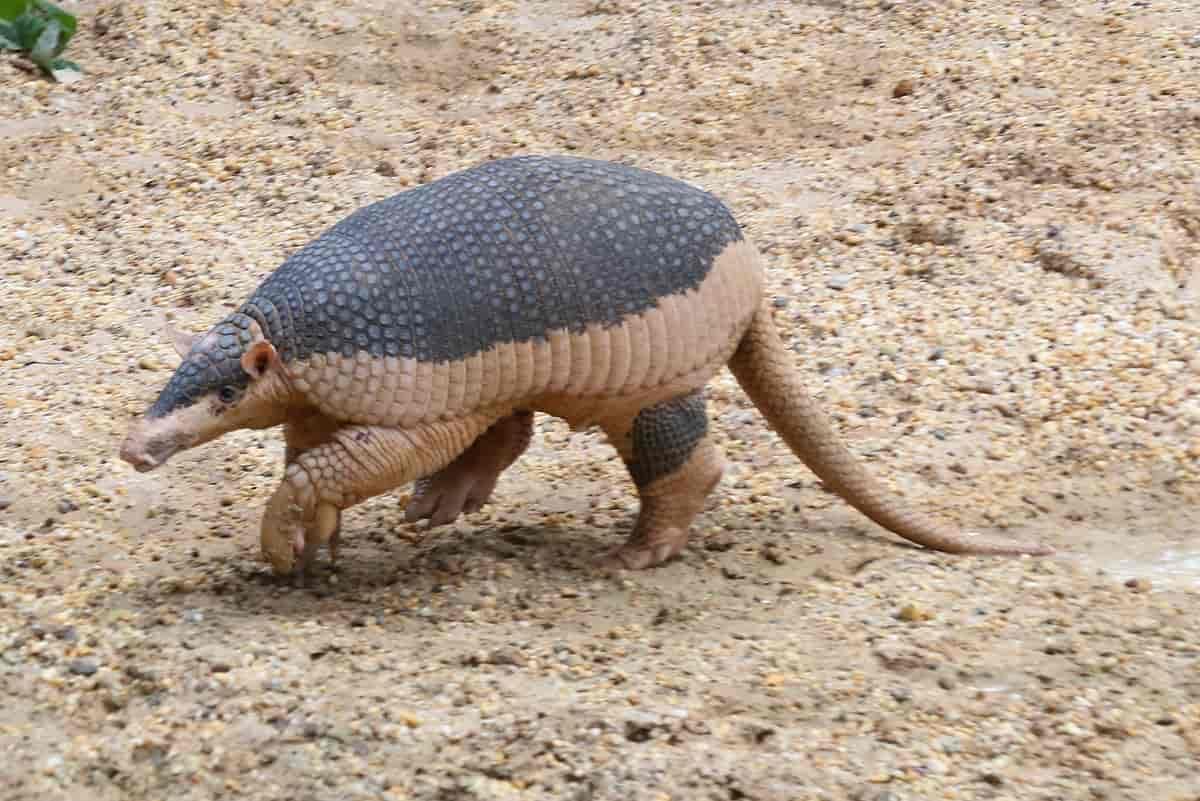 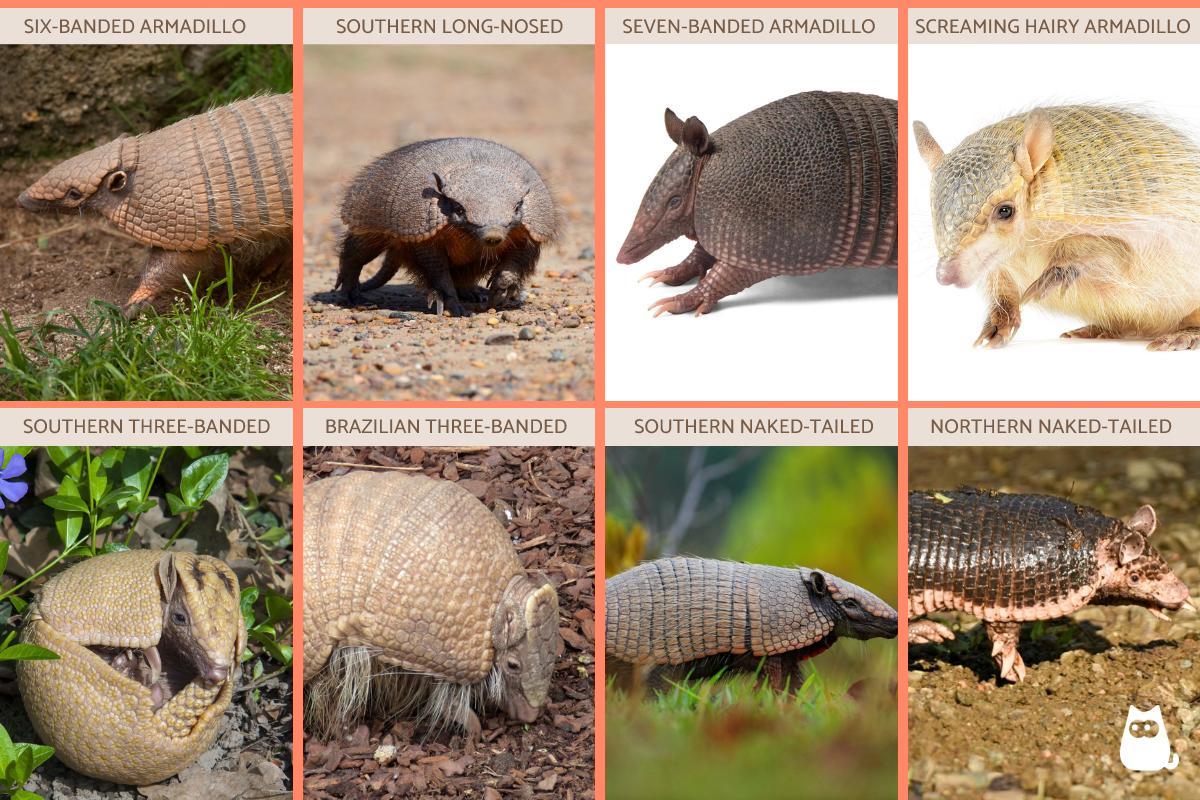 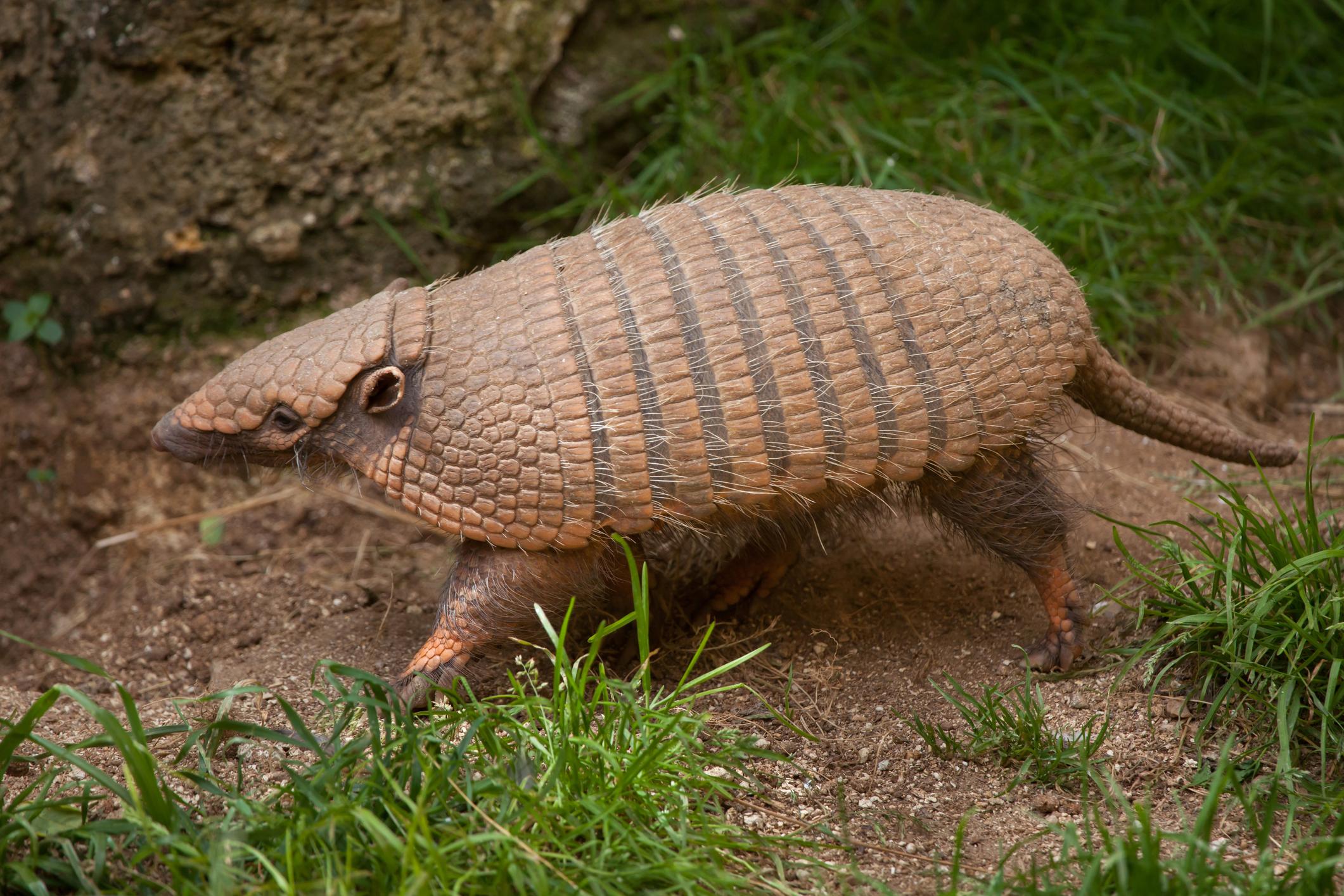 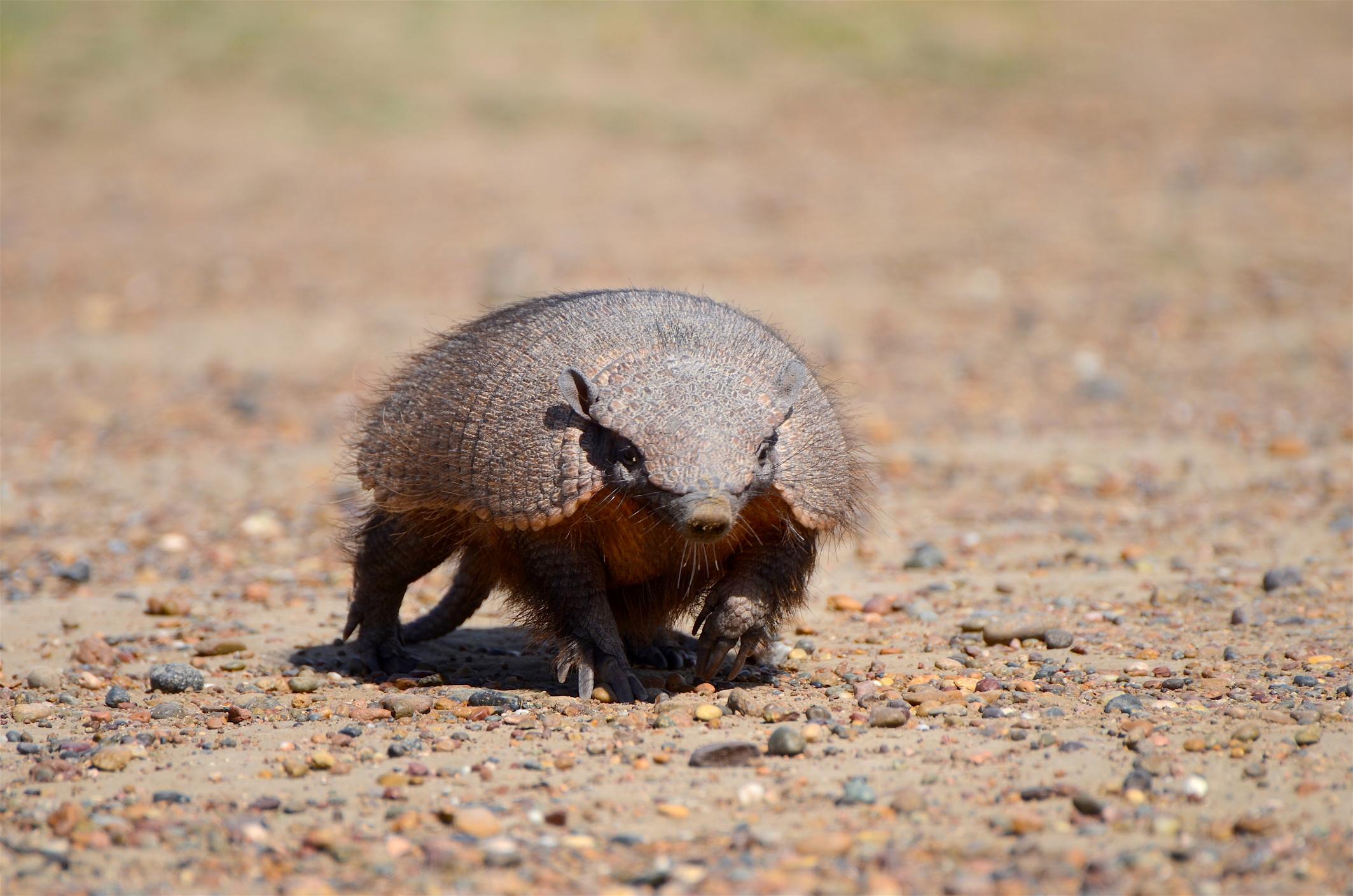 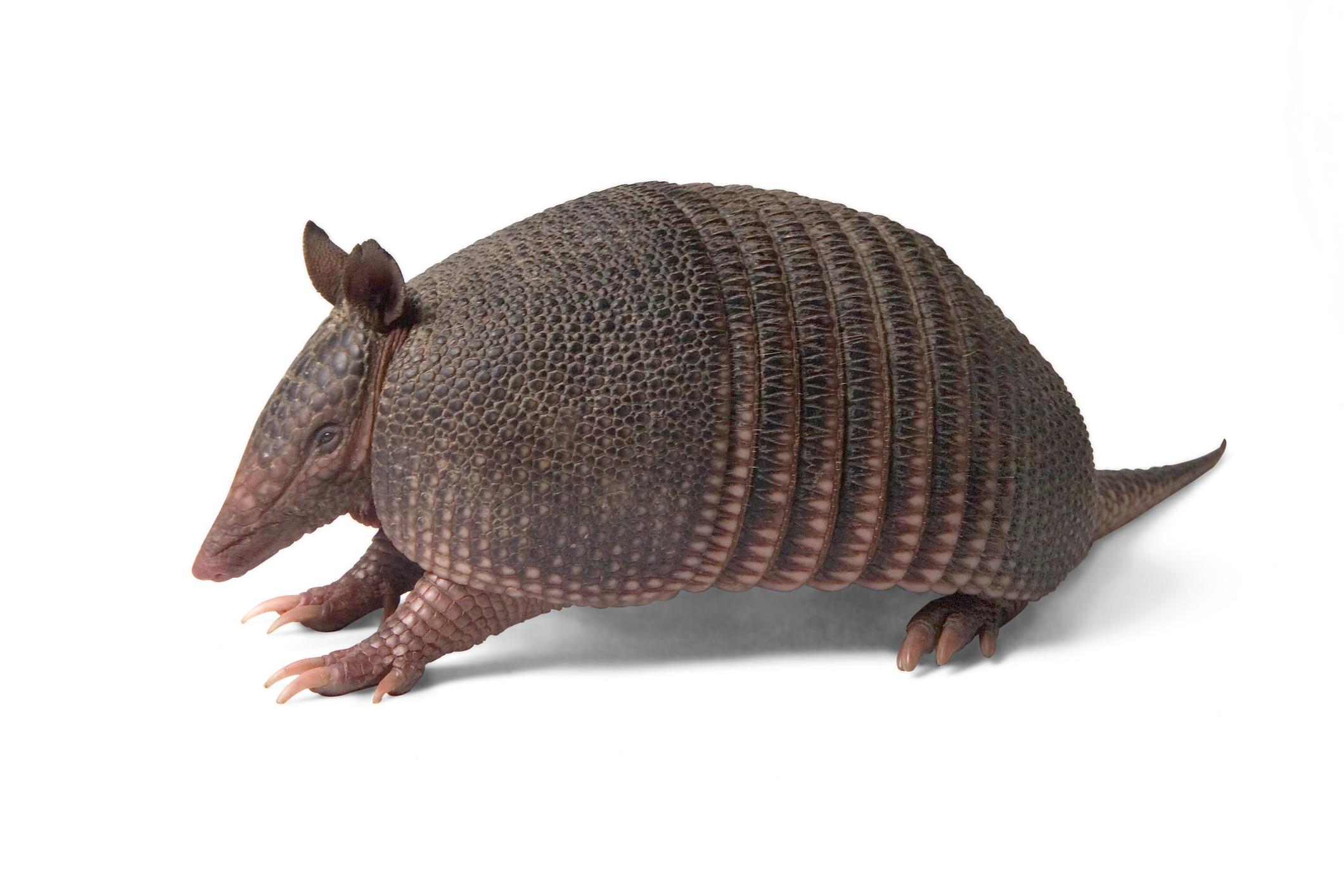 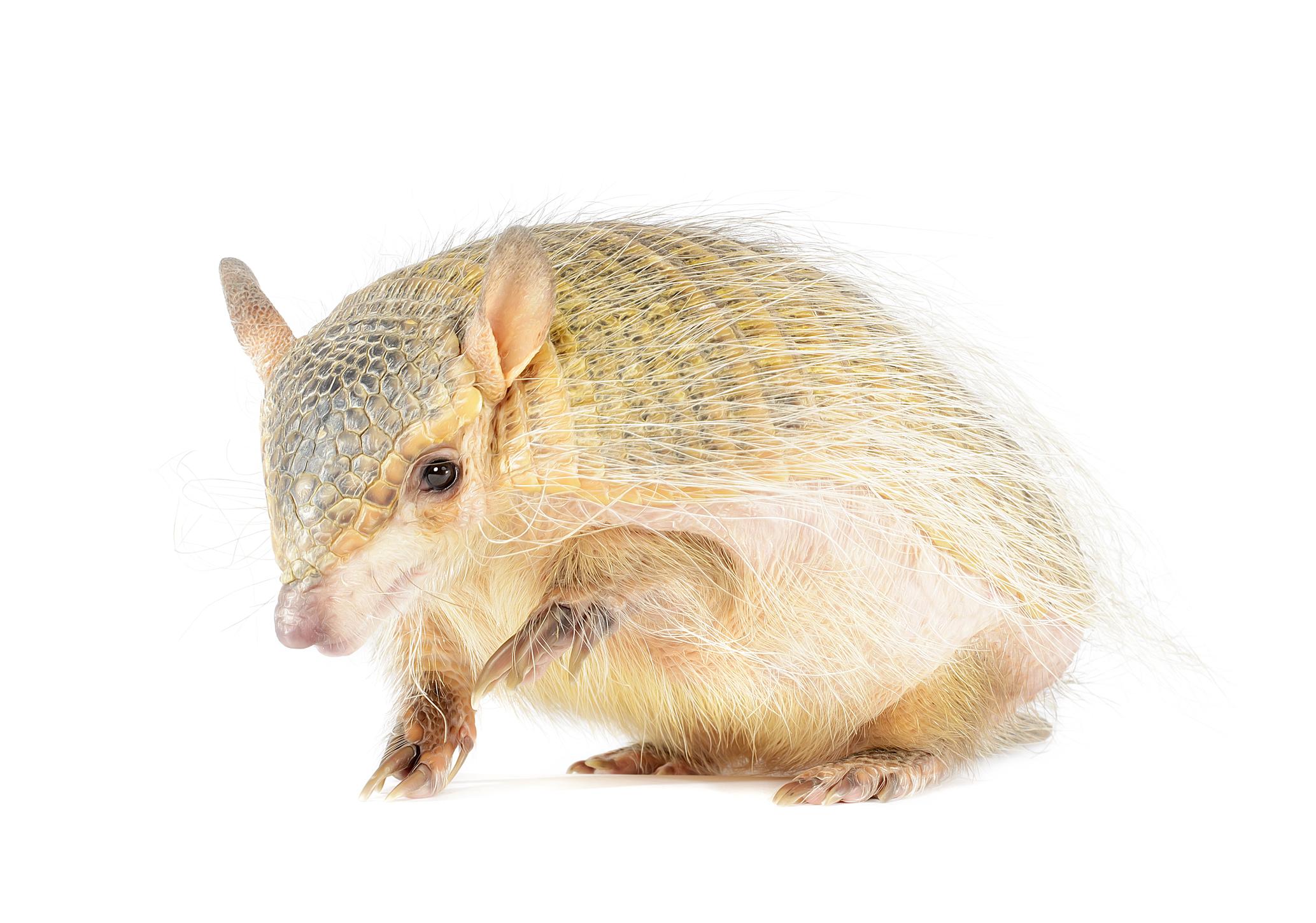 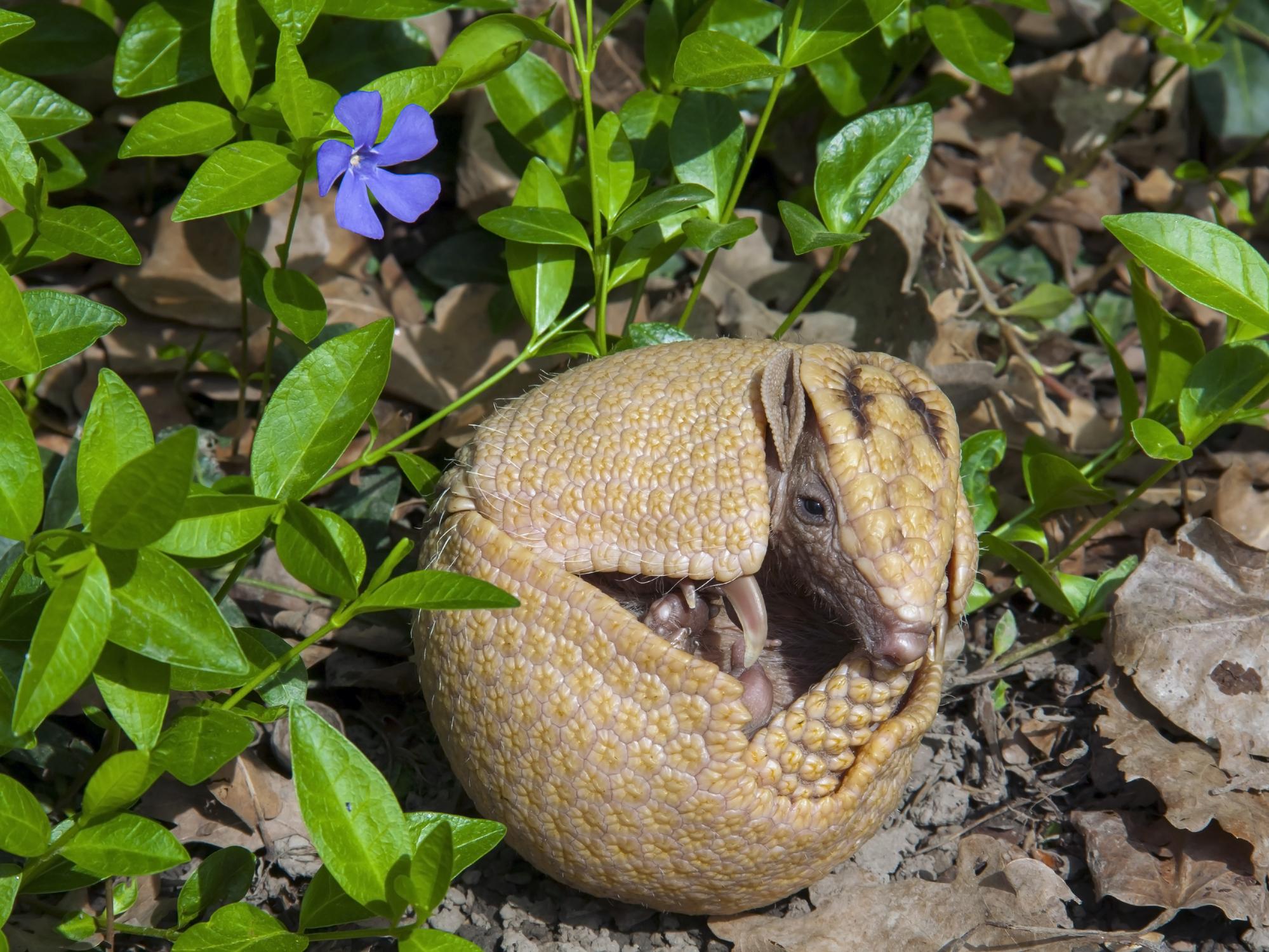 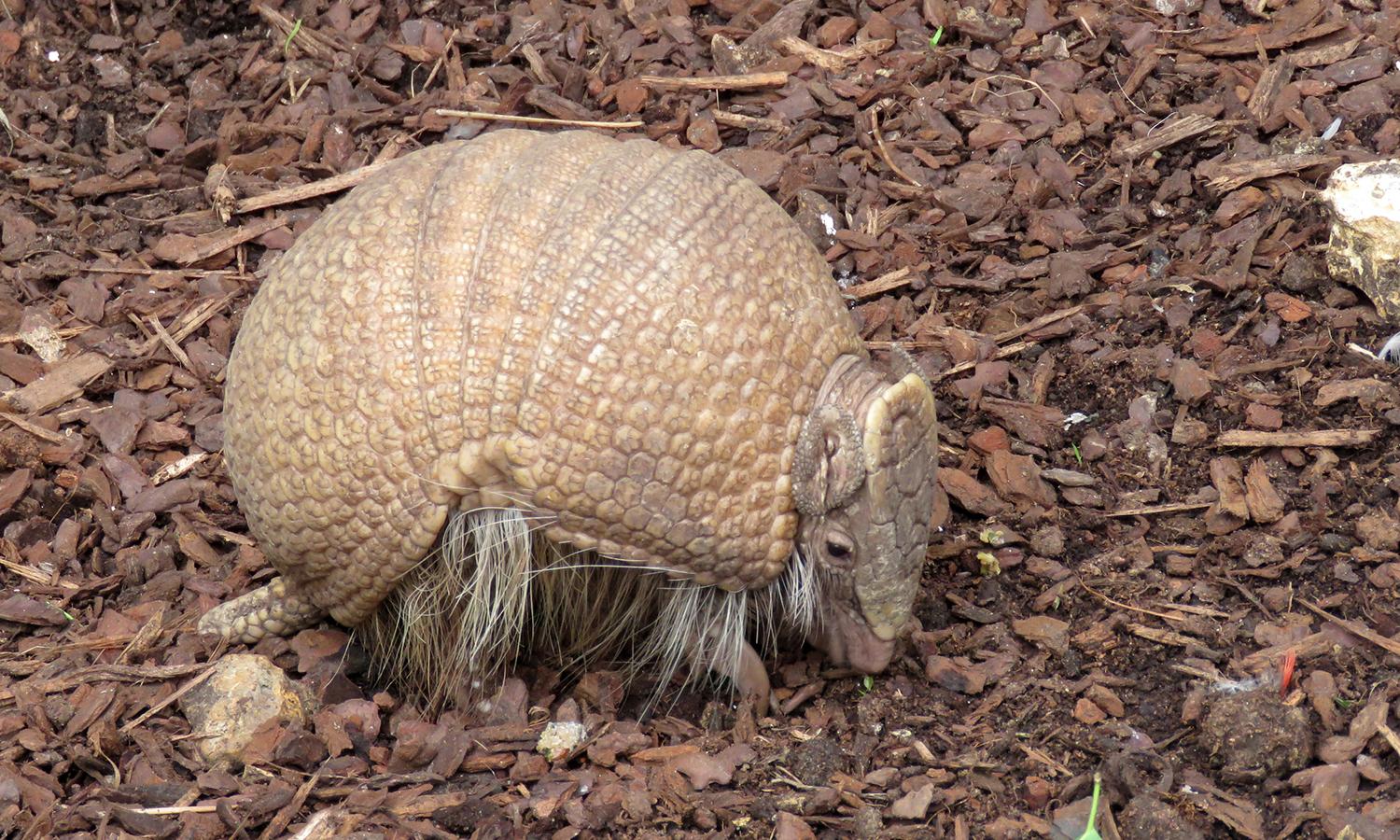 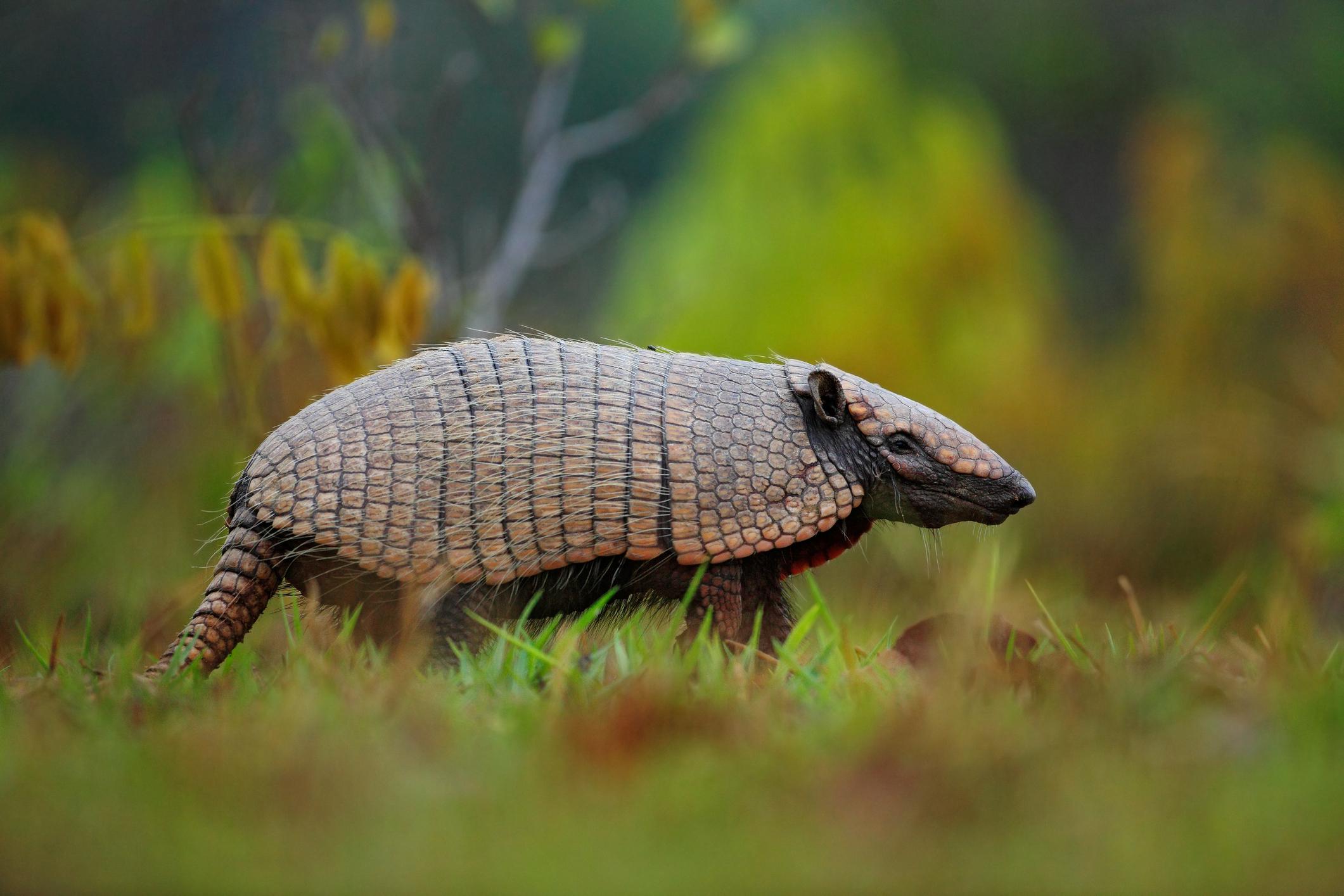 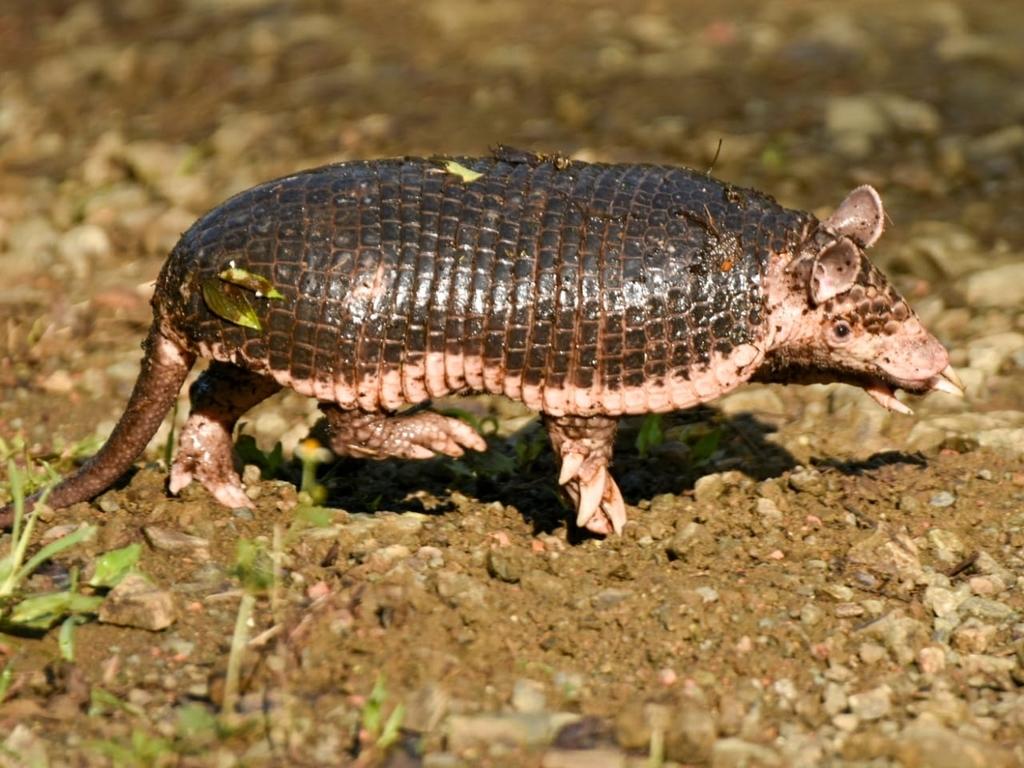 1 of 20
Types of Armadillos
Back to top