There are more than 5,000 extant species of lizard. Their diversity is incredible, as is their adaptability to some of the harshest terrains in the animal kingdom. From the smallest gecko to the largest monitor lizard, these reptiles have fascinating traits in terms of morphology, reproduction, feeding and more. Being venomous is a trait which, thankfully, only the minority of lizard species possess. However, there are more types of venomous lizard than scientists, until recently, have thought. Although not all have the ability to inoculate venom into prey, some are still capable of producing poisonous chemicals.

At AnimalWised, we provide you with this list of venomous lizards with photos to show you some of the most fascinating, and dangerous, creatures our world has to offer. We also show you some lizards which many think are venomous, but are not.

You may also be interested in: Incredible Horned Animals - Big, Long and Curly with Photos
Contents

The Mexican beaded lizard (Heloderma horridum) is a species of lizard that is under threat, mainly due to human influence. Due to their poisonous nature, they are hunted indiscriminately. There is also a large illegal trade of this animal. This is partly due to the belief it has medicinal and aphrodisiac properties, but it is also being sold as an exotic companion animal.

They measure about 40 cm in length and have a very robust body, with a large head, but a relatively short tail. Its coloration is usually a variation of light or dark brown, but it has black and pale yellow patches on their scales. They are mainly found on the Pacific coast of Mexico.

The Gila monster (Heloderma suspectum) inhabits arid spaces in northern Mexico and the southern United States. They measure about 60 cm in length and have a fairly bulky body. This limits their movements, so they tend to move slow. Their legs are short, although they have strong claws. Their scale coloration includes pink, yellow or white markings on a base of black or brown scales.

They are a carnivorous animal which feeds mainly on rodents, small birds, snakes, insects, frogs and eggs. They are a protected species as they are also considered vulnerable, including in their native Mexico.

Also known as the Motagua Valley beaded lizard, this venomous lizard is endemic to the Motagua Valley in Guatemala. They mainly inhabit dry forests in this area. Their population has been drastically affected by habitat destruction and illegal trade. Unfortunately, this means they are considered critically endangered.

The Guatemalan lizard feeds mainly on eggs and insects. Their body is black with irregular patches and they have arboreal habits. This means they spend much of their time in trees.

Perhaps the most well-known venomous lizard is the Komodo dragon. They are also one of the most feared. This is in a large part due to their great size, reaching up to 3 meters in length and 70 kg in weight. Their reputation of fearsomeness was not, however, built on being venomous. In fact, it was only recently discovered that the Komodo dragon has venom.

Initially it was though they were only able to transmit pathogenic bacteria which can be found in the lizard's saliva. When they bite their prey, these bacteria in the saliva enter the animal's wound, resulting in sepsis. However, it was also discovered they were capable of producing venom.

Komodo dragons hunt live prey, although they can feed on carrion. Once they bite their prey, they await the effects of their poison before biting and ingesting them. This venomous lizard is also a threatened species, the reason why various protection campaigns have been implemented.

Another on our list of poisonous lizards is the Savannah monitor (Varanus exanthematicus). They have a thick body and a tough skin, acting as an almost impenetrable armor to many predators. They can measure up to 1.5 meters and have a wide head, but narrow neck and tail

The Savannah monitor is native to Africa, but they have been introduced to Mexico and the United States. They mainly feed on spiders, inscects and scorpions, but will eat small vertabrates when possible.

The lace monitor (Varanus varius) is another arboreal species, this time endemic to Australia. They inhabit dense forests and can travel across large distances. They are large in size at a little over 2 m in length and weight approximately 20 kg.

They are both carnivores and scavengers. Their coloration is between dark gay and black, but may have black or cream colored-patches on their body.

The Mitchell water monitor (Varanus mitchelli) lives in Australia, specifically in some of its swamps, rivers, lagoons and other bodies of water. They can be arboreal, but always in trees near a body of water.

They have a varied diet, including both aquatic and terrestrial animals such as birds, small mammals, invertebrates and fish.

Among the most venomous lizards in the world, the Argus or yellow-spotted monitor (Varanus panoptes) cannot be left off our list. They are found in Australia and New Guinea and females are up to 90 cm long, while males can reach 140 cm.

They are distributed by various types of terrestrial habitats and also near bodies of water. Curiously, they are excellent burrowers and will take over existing burrows if compelled to. Their diet is very varied and includes diverse and small vertebrates and invertebrates. Fortunately, they are very fast and can catch prey easier than some other lizards.

The spiny-tailed monitor (Varanus acanthurus) owes its name to the presence of spiny structures on their tail. They are used for self-defense against larger predators. They are small in size and mainly live in arid areas. Their color is reddish brown, but they have patches of yellow in various places. Their diet mainly consists of insects and small mammals. They often dig into burrows to excavate prey.

The Earless Lizard (Lanthanotus borneensis) is endemic to some areas of Asia. They inhabit tropical jungles near rivers and other bodies of water. Although they lack certain hearing structures, they are not deaf. They are also capable of emitting certain sounds. They measure up to 40 cm, and are both nocturnal and carnivorous. They feed on crustaceans, fish and worms.

They were not always known as a venomous species. However, glands which emit toxic substances have recently been discovered. Although not as powerful as other lizards, they have an anticoagulant effect. This means their prey has trouble stemming the flow of blood from a wound. However, their bites are not considered lethal to humans.

Venom of lizards in the genus Heloderma

The bite of these animals is quite painful, but people who are in good health should be able to recover. However, envenomation can be fatal as it causes suffocation, paralysis and hypothermia. A bite from one of these venomous lizards needs to be addressed immediately. Lizards in the genus Heloderma do not directly inoculate the venom. Instead, it is secreted via glands in the mouth which transmits to the wound due to the physical trauma of their bite.

The venom is a cocktail of various chemical compounds, including the enzymes hyaluronidase and phospholipase A2, the proteins serotonin, helothermin, gilatoxin, helodermatin, exenatide and gilatide and others, as well as hormones.

Some of these compounds contained in the venom have been studied, such as gilatide (isolated from the Gila monster) and exenatide. There are potential medical benefits which can be quite surpising, including some hopeful studies which can see benefits for those with Alzheimer's disease and type 2 diabetes.

Venom of lizards in the genus Varanus

For a time it was thought that only lizards belonging to the genus Heloderma were venomous. However, later studies showed that toxicity is also present in the genus Varanus. These lizards have poisonous glands in the upper and lower jaws which flow through specialized channels between each pair of teeth.

The venom produced by these animals is an enzymatic cocktail, similar to that of some snakes. As with the Heloderma group, they cannot inoculate it directly to the victim, but the venom pases into the wound via saliva when bitten. The classes of toxins identified in the venom of these animals are proteins rich in cysteine, kallikrein, natriuretic peptide, and phospholipase A2.

A clear difference between the genus Heloderma and Varanus is that, in the former, the venom is transported through dental canaliculi. In the latter the substance is excreted from the interdental areas.

A few cases of venomous lizard bites from this genus have ended in a fatal way, usually with the victim bleeding out. However, those who are treated quickly are more likely to survive. None of these lizards are among the most venomous animals in the world.

There is an undoubtable mystique about many of these venomous lizard species. Such mystique has led to myths surrounding their deadliness. Some see them as ‘man eaters’ or consider them as dangerous as their dinosaur ancestors. Although attacks on humans are rare, they are often hunted indiscriminately and their populations decimated. Some lizards which aren't even poisonous are grouped with their venomous cousins, including:

A common trait in poisonous lizard species is that most are in some state of vulnerability, many in danger of extinction. An animal being dangerous is not a reason to annihilate it. All forms of life on this planet must be respected and conserved where necessary.

If you want to read similar articles to Venomous Lizards List - With Photos, we recommend you visit our Facts about the animal kingdom category.

Bibliography
Animals With Scales - Full List
Non-Venomous Snakes in India
Are Komodo Dragons Venomous?
Are Lizards in Your House Dangerous?
Related categories
Endangered animals
Most read
1.
What Animal am I According to my Zodiac Sign?
2.
What Does It Mean When a Cat Shows Up at My Door
3.
10 Most Beautiful Animals in the World
4.
Differences Between Deer, Elk, Moose and Reindeer
5.
Why do Dogs Get Stuck when Mating?
6.
Examples of Vertebrate and Invertebrate Animals
7.
The 10 Most Solitary Animals in the World
8.
Animals With Scales - Full List
Types of Eagles - Different Eagle Species with Photos
Animals with Trunks - List of Trunked Animals
Are There Venomous Spiders in the UK?
Venomous Snakes in Texas
List of Big Eyed Animals - 15 of the Cutest!
Types of Ants - Characteristics and Photos
Venomous Snakes in Florida
Are Camel Spiders Venomous? 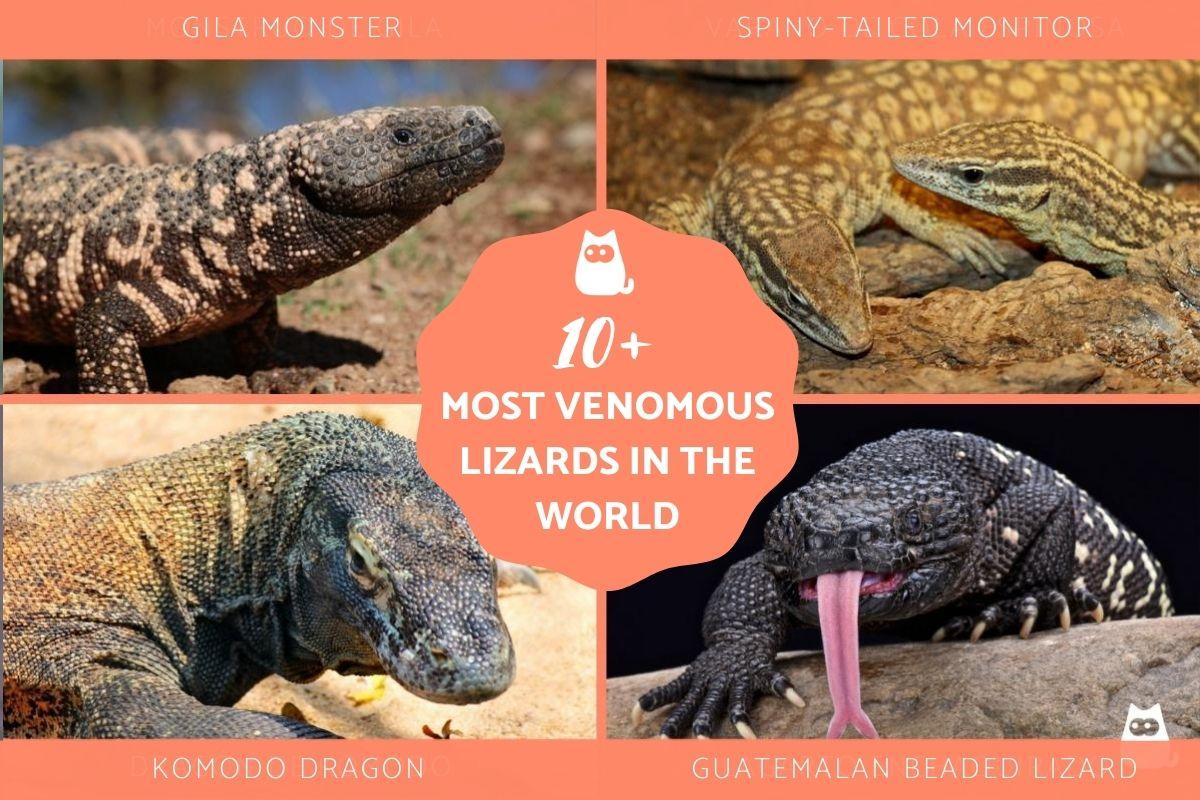 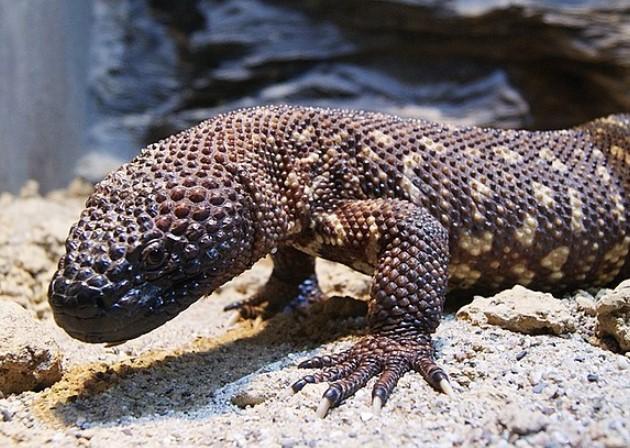 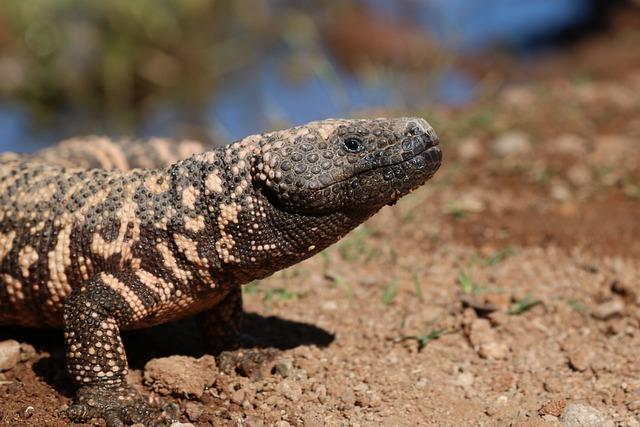 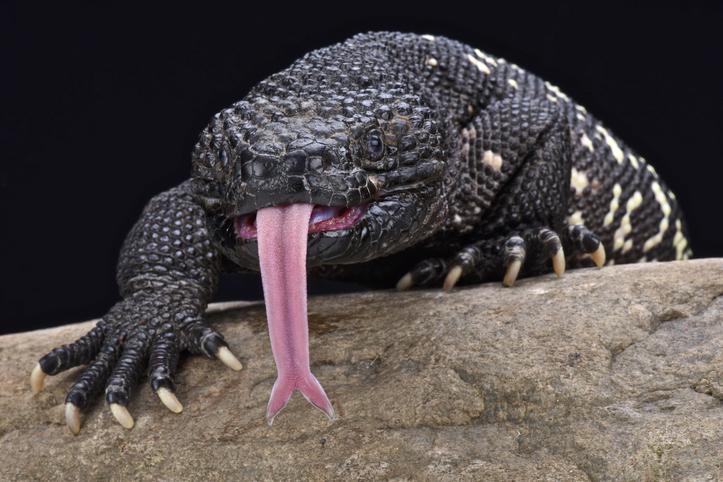 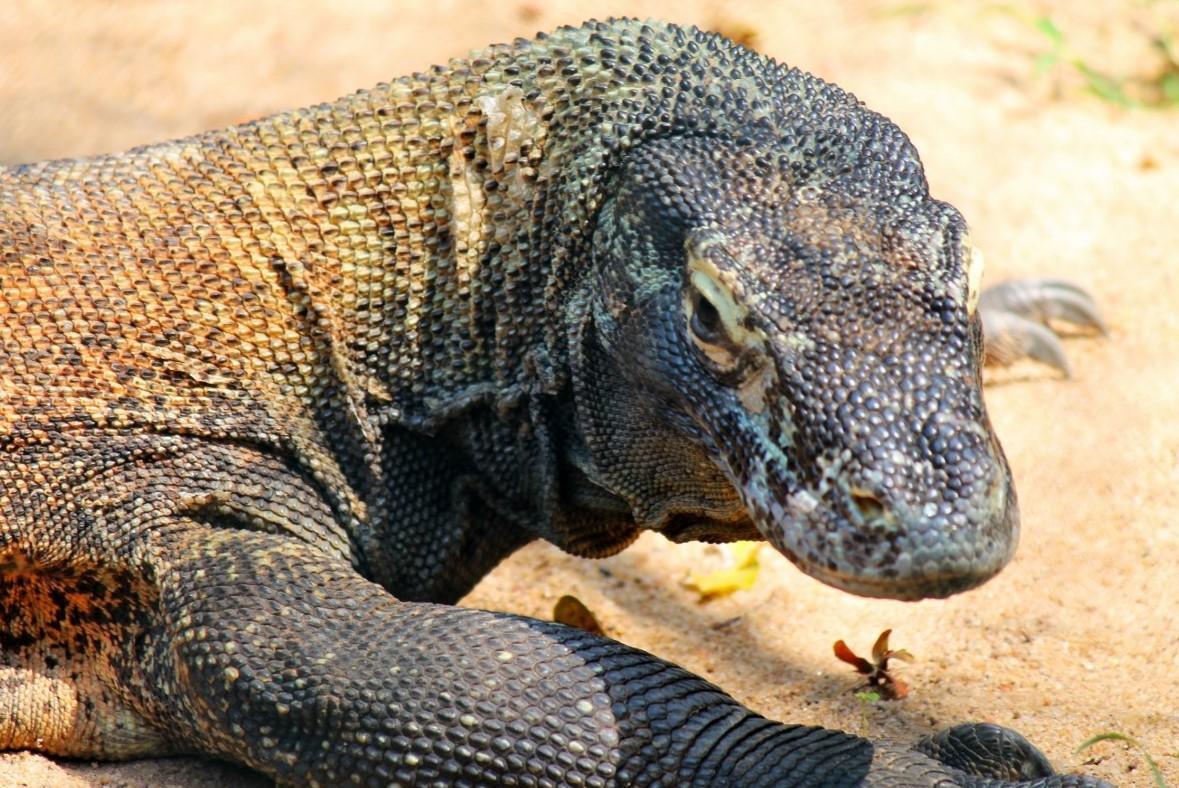 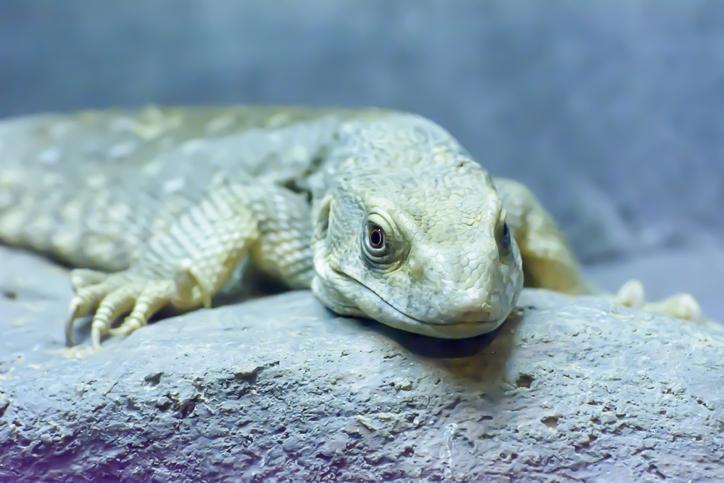 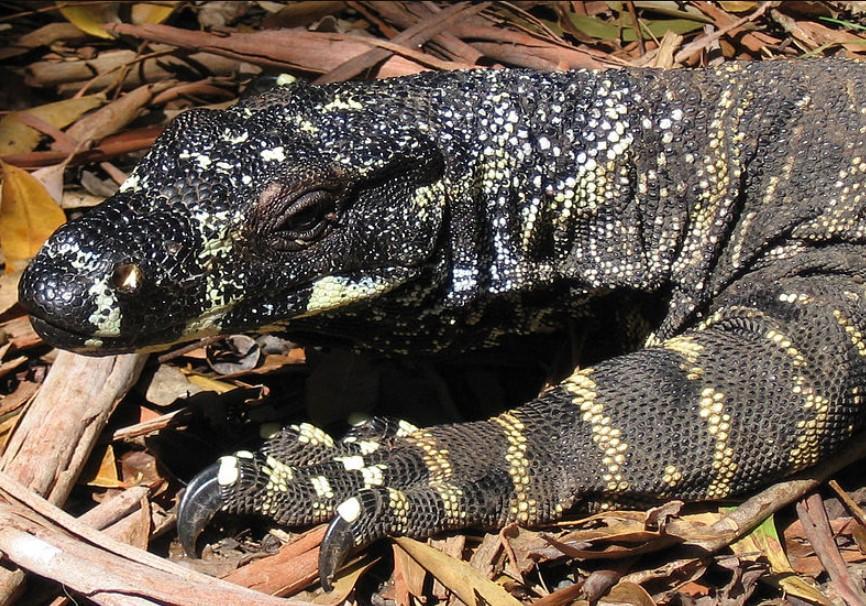 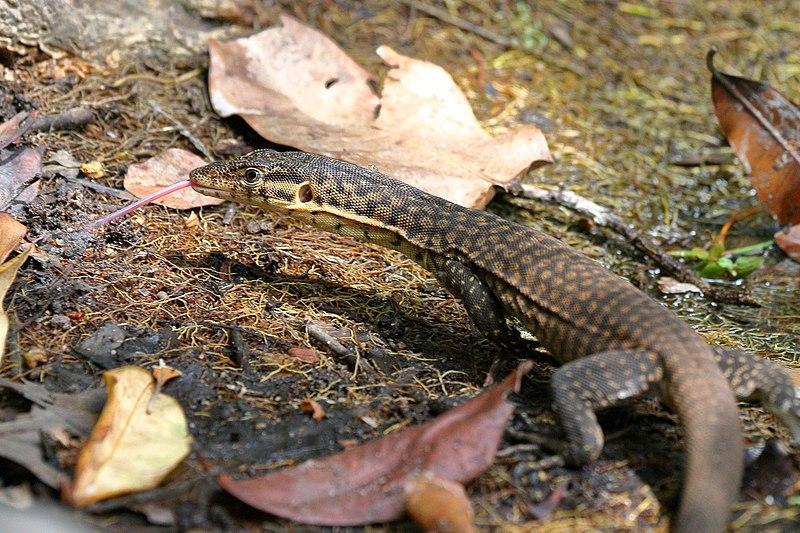 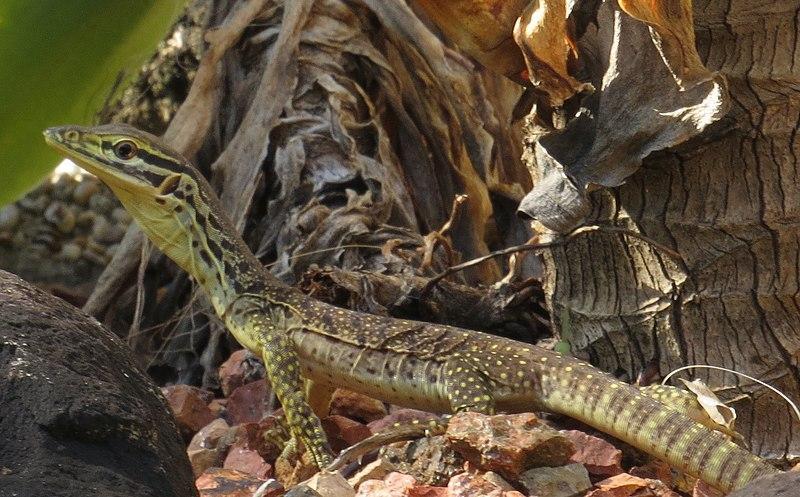 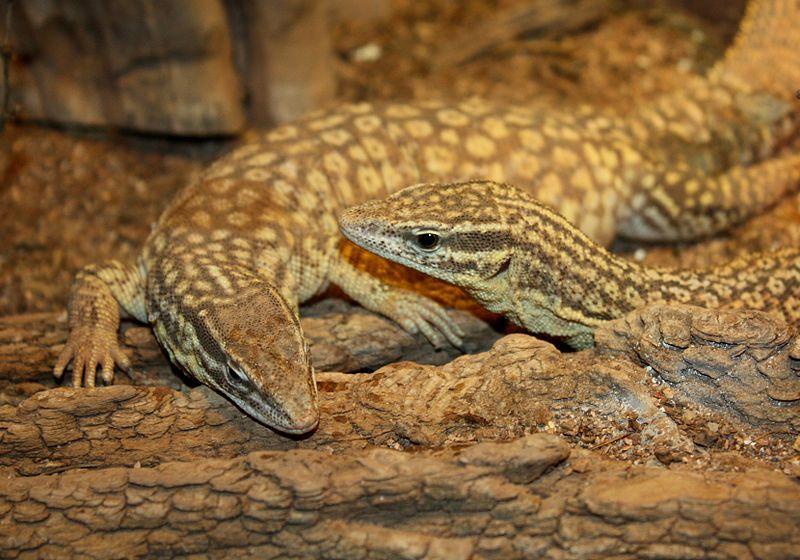 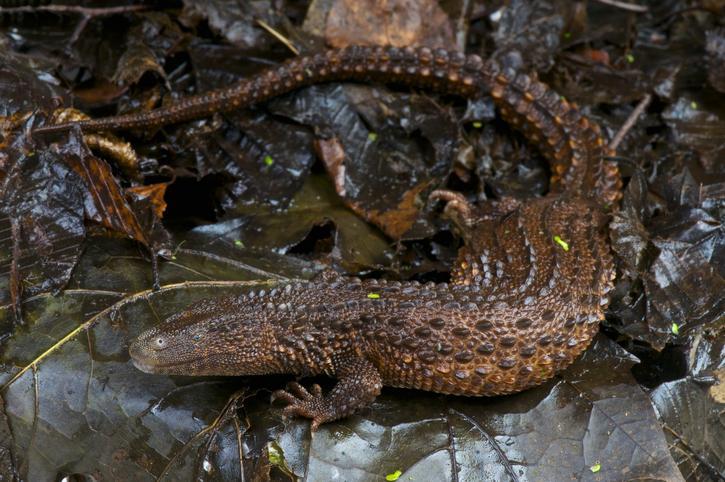 1 of 11
Venomous Lizards List - With Photos
Back to top