What Dog Breeds Can Have Different Colored Eyes?

Heterochromia irides (in Greek), or “differently colored iris” is a genetic default when a living creature has two differently colored eyes. Seen mostly in dogs, horses, and cats, this condition is present in humans as well. Some of the most common heterochromatic dogs include Australian Shepherds, Siberian Huskies, and even the average Beagle. Read this AnimalWised article to find out what dog breeds can have different colored eyes.

You may also be interested in: Why Do Some Cats Have Different Colored Eyes?
Contents

There are different legends about dogs with differently colored eyes. Some dogs with oddly colored eyes are said to protect heaven and earth at the same time, according to Native American lore. Another story says that while heterochromatic dogs protect mankind, brown or red-eyed dogs are spirit dogs. Another Inuit legend states that sled dogs with this odd-eye coloring are faster than those with same colored eyes! The truth is that there is a genetic reason behind the difference in coloring. Melanin, a pigment responsible for coloring the eyes deferentially, resulting in odd-eyed coloring. Now that that is settled, let's see which breeds are heterochromatic.

Different colored eyes in certain breeds are not uncommon and can be seen frequently. These include the following:

The American Kennel Club standard even discussed how the Siberian husky may have a single brown or blue eye or partly colored eyes with flecks in them. Another odd-eye colored dog is the Australian Shepherd which originates in the USA. The Australian shepherd is a ranch or farm dog which is also an amazing, affectionate and loyal pet. Aussie Shepherds, according to the United States Australian Shepherd Association, come with blue or red merle coats and have blue and brown eye pairs. Another American breed that has eyes which are oddly-colored is the Louisiana Catahoula Leopard dogs.

In sectoral or partial heterochromia, the dog has a multi-colored eye, where one color is a different shade from the remainder of the eye. This is found in dogs with the Merle trait, such dogs usually include the following:

This result when eumelanin is diluted or modified by recessive genes in D or B series and can result in shades from yellow-green to yellowish gray. The merle gene dilutes random pigment parts in the eyes and nose. Blue eyes can result from pigment loss in the coat.

Siberian Huskies are a non-merle species which may also have sectoral heterochromia. In Native American legend, dogs with differently colored eyes have ghost eyes, because heaven can be seen with the blue eye and earth with the brown! English springers and Siberian huskies are some species with amber eyes.

The Merle gene causes blue color in the iris, and butterly noses. The gene also causes split or wall eyes ( called heterochromia too) where the dog has one amber or brown eye and a blue or a split eye with some blue in it. In dogs, a split eye varies from mostly blue to brown or amber. The more dilution in the coat of merle, the more heterochromia we can find.

Double or homozygous merles have blue eyes too. The Aussie Shepherd, Welsh Corgi, and Border Collies are all examples of merle processes. Albinism and white coating around the eye are also caused by genes. However, there are no full cases of albinism in dogs, though Dobermans report intermediate form of this. Ultimately, each dog is special and whatever interesting features he has, the traits such as heterochromia are part of his distinctive identity and something true dog lovers adore.

If you want to read similar articles to What Dog Breeds Can Have Different Colored Eyes?, we recommend you visit our Facts about the animal kingdom category.

What Colors Can Dogs See?
Can Dogs See in Color?
Why Can a Chameleon Change Color?
Eyes of Spiders - How Many Eyes Do Spiders Have?
Related categories
Endangered animals
Most read
1.
What Animal am I According to my Zodiac Sign?
2.
What Does It Mean When a Cat Shows Up at My Door
3.
10 Most Beautiful Animals in the World
4.
The 10 Most Solitary Animals in the World
5.
How Many Types of Lions Are There?
6.
Why do Dogs Get Stuck when Mating?
7.
10 Smells that Attract Cats
8.
Animals With Scales - Full List
What Colors Are Shiba Inu Dogs?
Most Common Cat Eye Color and Their Meaning
What Breed Is a Tortoiseshell Cat?
What Does a Cat's Color Say about its Personality?
My Cat's Fur Is Changing Color
Different Types of Salamander
My Dog's Nose is Changing Color
Chinese Dog Breeds List

4 comments
Rating:
delilah van de laar
26/12/2018
I am sorry but mine amstaff has different eye colors but thans for the information
mine english is trash
im dutch

That's no problem! It's very interesting to hear. Is there any chance you could upload a picture? We'd love to see.
Rating:
Cheri
20/08/2018 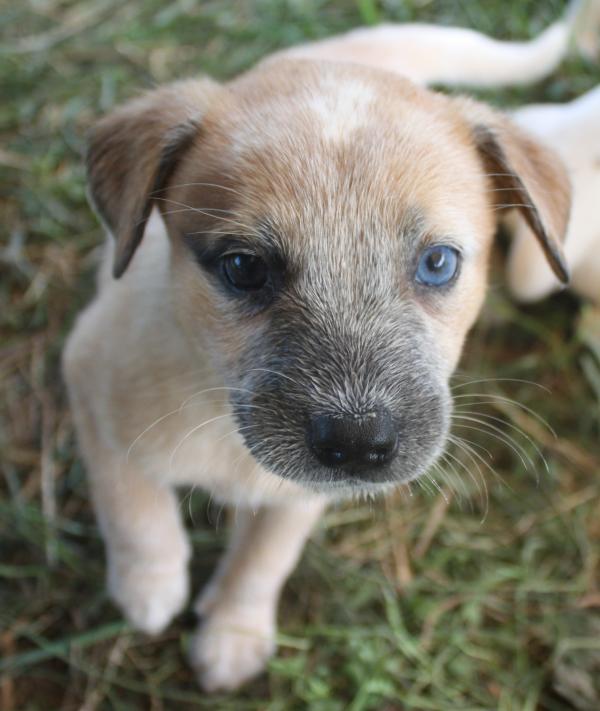 I love the info with the article but some of the info in the article is incorrect. The ACD ( australian cattle dog ) is NOT in the merle category. They do NOT have merle genetics unless crossed with the australian shepherd, creating the so called "Texas heeler".
The ACD has a ticking or mottling gene which is "triggered" to start around 3 weeks. Therefore, the merle genetics have no cause for the heterochroma in the true ACD.
I have just had a pup ( 10 weeks old ) that is true bred ACD ( I personally own past 3 sets of lineage to this pup ) & have found NO reason for this dog to have heterochroma, unless it is just a very recessive gene from the throw back to original making of the breed. I would have figured one of my white ACDs ( lack of the ticking gene to get the cue to "kick in" ) would show this trait but it was actually one of my red mottled pups & the runt.

Thank you for providing this clarification. We didn't mean to imply they were genuine merle, but that they still have heterochromia nonetheless. The reason for it is not due to the merle gene, but it is still genetic (figuring it would be very unlikely for a trauma to cause the condition in utero - although it is possible).

Which genes cause the inheritance are not necessarily well understood. However, this shouldn't mean there is cause for concern (not that you were concerned). There have been links between heterochromia and deafness in some breeds of dog, including the ACD. It is something all ACD guardians should keep an eye out for.
Lyne legault
22/04/2018
I have a bobtail ils english shekel dog w
Whit différent Colors eyes
Rating:
Serena C Roen
23/11/2017 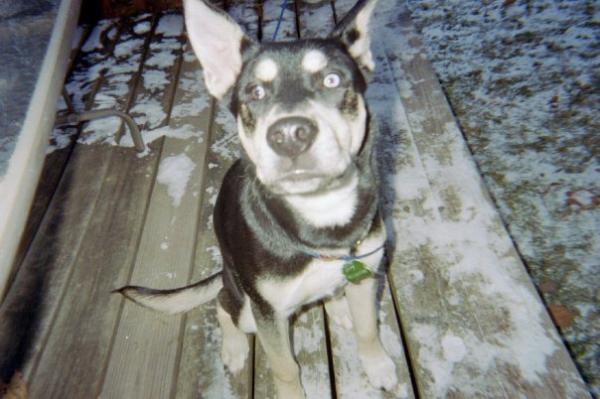 This is our dog Nicky. He has one blue eye and a blue/brown eye. This was the best photo I could find. He was under a year old. He is now 8 years old. We love him for his personality and his uniqueness. We know he has Husky in him. He possibly has German Shepard. I've been told Alaskan Husky also but research has said brown eyes are more predominant in that classification.
What Dog Breeds Can Have Different Colored Eyes? 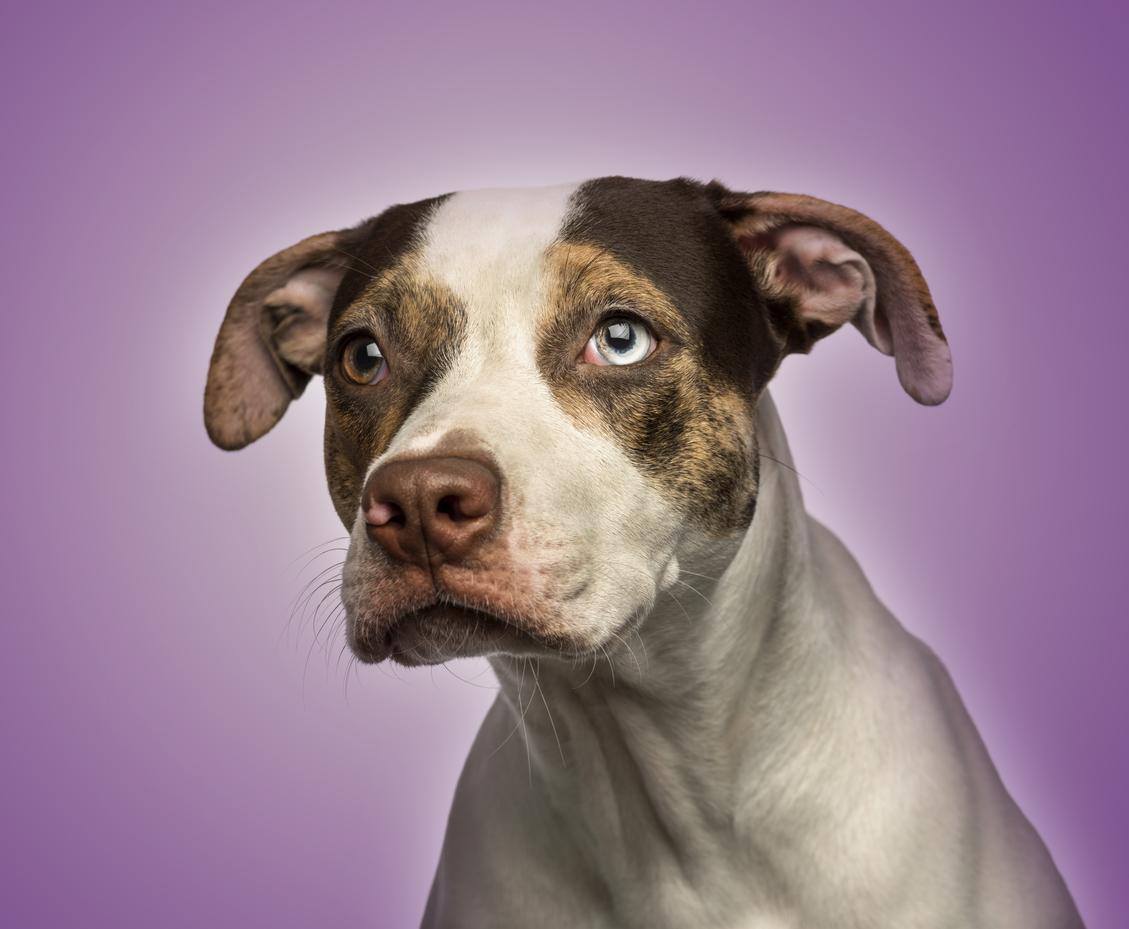 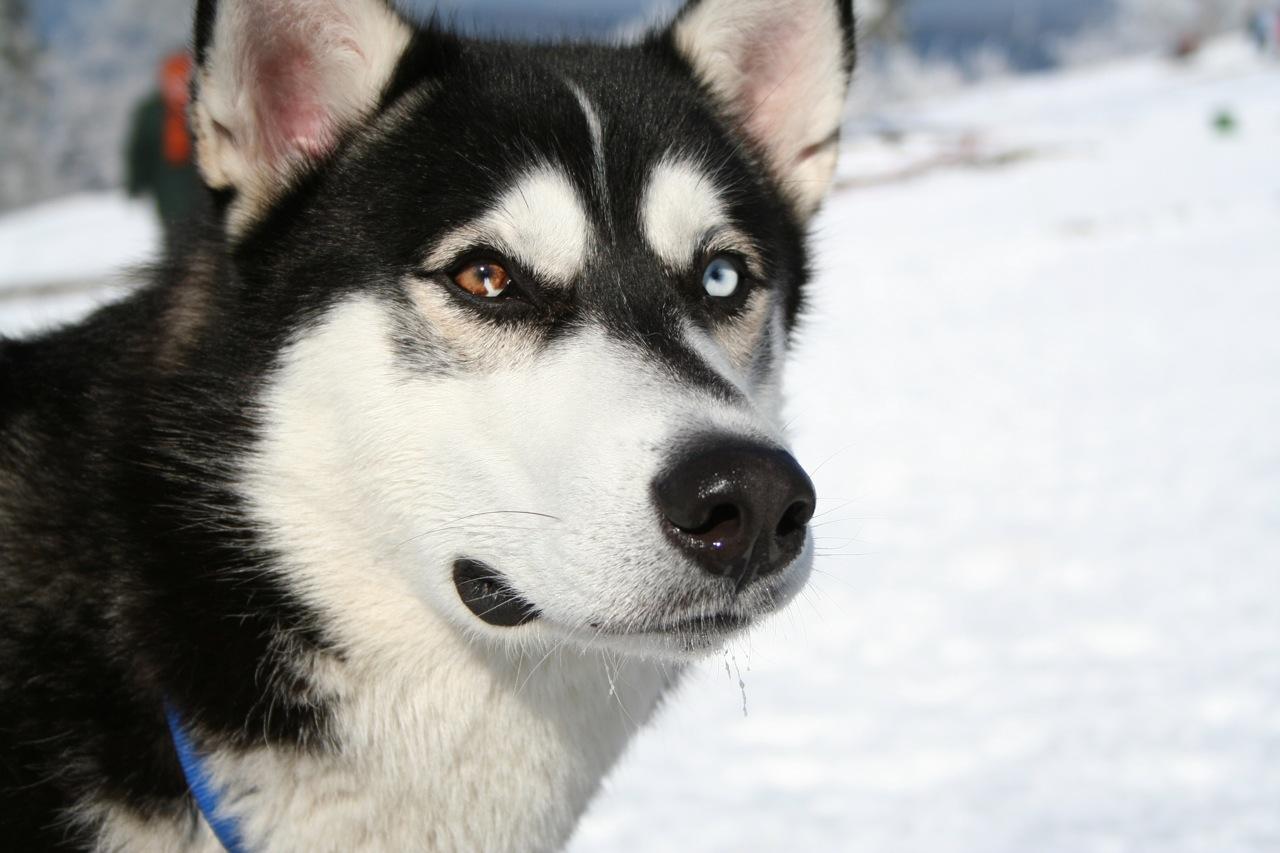 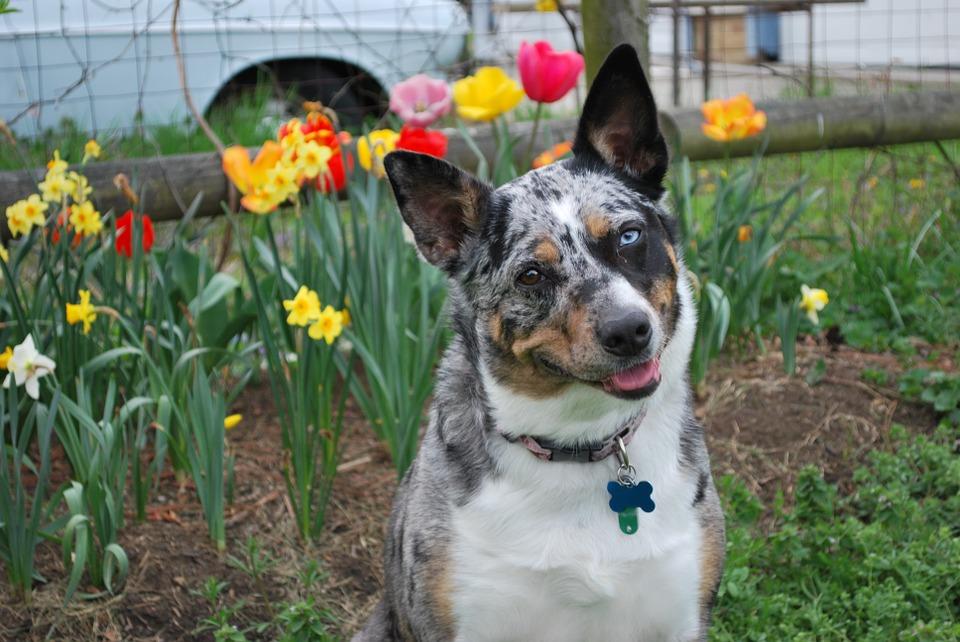 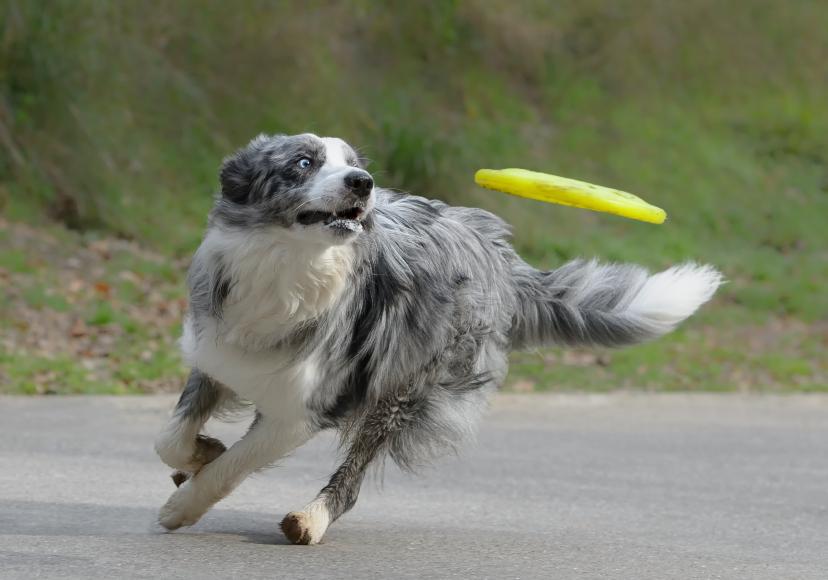 1 of 4
What Dog Breeds Can Have Different Colored Eyes?
Back to top