What is the Story of the Kamadhenu Cow?

Kamadhenu ( कामधेनु, Kāmadhenu in Sanskrit), also referred to as Surabhi (सुरभि, Surabhī in Sanskrit) is the mother of all cows, according to ancient Hindu scriptures. She is the cow of plenty who provides the owner whatever he seeks. Stories of ancient Indian mythology depict Kamadhenu as the mother of all cattle as well as of the eleven Rudras, followers of Shiva fathered by Brahma.

Cows are considered holy in India, because they are the earthly embodiment of the Kamadhenu. She is an integral part of the Hindu culture and grants wishes and desires, fulfilling all that the human heart could possibly want. There are many stories about her, and all of them are incredibly interesting.

If you want to explore Hindu mythology, stay with us at AnimalWised and learn what is the story of the Kamadhenu cow.

You may also be interested in: What is the Story of Nandi the Bull?
Contents

The Vedas are the oldest scriptures of Hinduism; some of the texts can be dated to the second millenium BC, which makes them older than the Torah and the Iliad but later than the Epic of Gilgamesh or the Code of Hammurabi. The story of Kamadhenu appears in the Vedas, which makes it very, very old.

The four legs of this Mother Cow symbolize the four texts of the Vedas, while the teats are four Purusharthas, the goals of all human life: Righteousness, prosperity, love and liberation. While the horns symbolize the gods, the sun is exemplified by the face as is the moon. The shoulders are a symbol of Agni, the god of fire. Therefore, all that is sacred can be found in the cow.

Kamadhenu is known to exist in five different forms: Nanda, Sunanda, Surabhi, Sumana, and Susheela. Other names are Sabala and Matrika. Kamadhenu is regarded as the divine mother of all cows. Like her daughter Nandini, Kamadhenu could grant a wish to any true seeker.

Kamadhenu over the ages

Kamadhenu symbolizes dharma, the right, orderly way of living and being.

She is said to stand steadily upon the earth on all four feet during Satyayuga or the world's first age of truth, three feet during Tretayuga, the second stage of less than perfection, and only one leg during the Kaliyug or dark ages.

Different texts provide diverse versions of the story of Kamadhenu's birth. One of them says that this Divine Cow emerged from the Ocean of milk or Kshira Sagar during the churning of the oceans.

In this story from Hindu mythology, there was a battle between the gods (devas or suras) and demons (asuras). However, the devas and the asuras managed to work together, churning the oceans to obtain the milk of immortality. All sorts of elements appeared from that churning, not only the nectar, but also different goddesses, trees, magical objects, poisons and Kamadhenu, the cow. In the end, the gods kept the nectar from themselves.

The devas or gods decided to give Kamadhenu to the Saptarishis, the seven great sages. For them, the sacred cow supplies milk and ghee for sacred Yagnas, rituals. In time, she came into the ownership of the sage Vashista.

According to the Anushasana Parva, a book of the Sanskrit epic Mahabharata, Kamadhenu was the daughter of Daksha, the creator of the world, also called Prajapati. She came to life from Daksha after he consumed Amrita, the nectar of immortality that was created from the churning of the oceans. The cow is therefore regarded as the mother of the world and the child of Lord Brahma, in some legends.

Ramayana, a holy Hindu epic describes Surbahi or Kamadhenu as daughter of one of the seven sages, Kashyapa, and his wife Krodhavasa, born of Lord Brahma.

According to the Vishnu and Bhagwat Purana, Surabhi is the daughter of Daksha and Sage Kashyapa's consort.

Mother to all cows

As per the Matsya Purana, Surbahi was the consort of Brahma and mother of the cow Yogishwari, as well as of the eleven Rudras, goats, swans and other species. According to another version, she is also the mother of the Brahmins and all the cows.

In the Devi Bhagvata Purana, Krishna and Radha felt thirsty and so the Lord created the cow Surabhi or Kamadhenu and then milked it. Drinking from the vessel, he let it fall; the milk became the Ocean of milk, from which thousands of cows emerged from Surabhi to serve the Gopis, that is, the shepherds.

As you can see, there are many different stories about Kamadhenu and her birth, but some elements are repeated.

Lord Dattatreya, a monk and one of the lords of Yoga, is often shown holding Kamadhenu in one of his hands. In this version, she is related to Brahmanic scriptures and embodies the five elements: Earth, Water, Fire, Air and Ether. The five elements are also called Pancha Boota.

The Sacred Cow is considered the protector of the Brahmin sages and symbolizes their spiritual and material wealth apart from being a religious figure. Kamadhenu also is said to have protected sage Vashishtha from the wrath of kings and produced hordes of warriors that destroyed armed forces heading to destroy her owner's hermitage.

Where does Kamadhenu the cow live?

The place Kamadhenu lives in is also the subject of many legends in ancient Hindu treatises. In the Mahabharata she is said to have ruled Goloka - heaven - beyond the three worlds.

The Ramayana describes her as living in the land of the Lord of Oceans situated in Patala, the underworld with her four daughters, the Dikpalis or guardians of cows. It also states that her milk has six different flavors.

Kamadhenu's progeny, the cows, are considered holy since ancient times; people in India still look after cows and feed them outside temples. Hindus protect and respect the cow for her milk and nurturing qualities, as well as her holy symbolism. The legend of Kamadhenu lives on in India to this date.

Now that you know the story of the Kamadhenu cow, why not learn more about the sacred animals in Hinduism and the festival of Tihar?

If you want to read similar articles to What is the Story of the Kamadhenu Cow?, we recommend you visit our Facts about the animal kingdom category.

What is the Story of the Kamadhenu Cow? 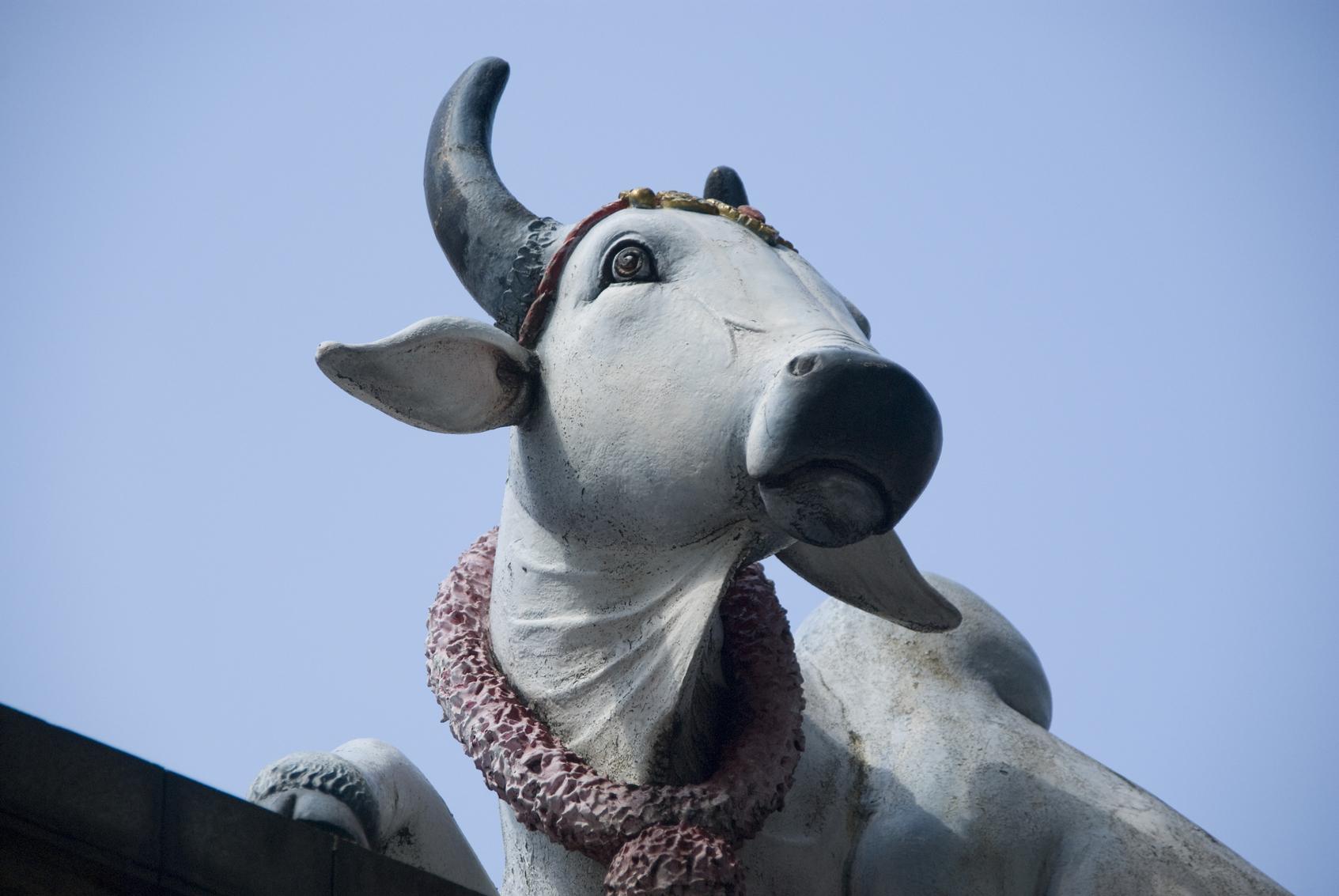 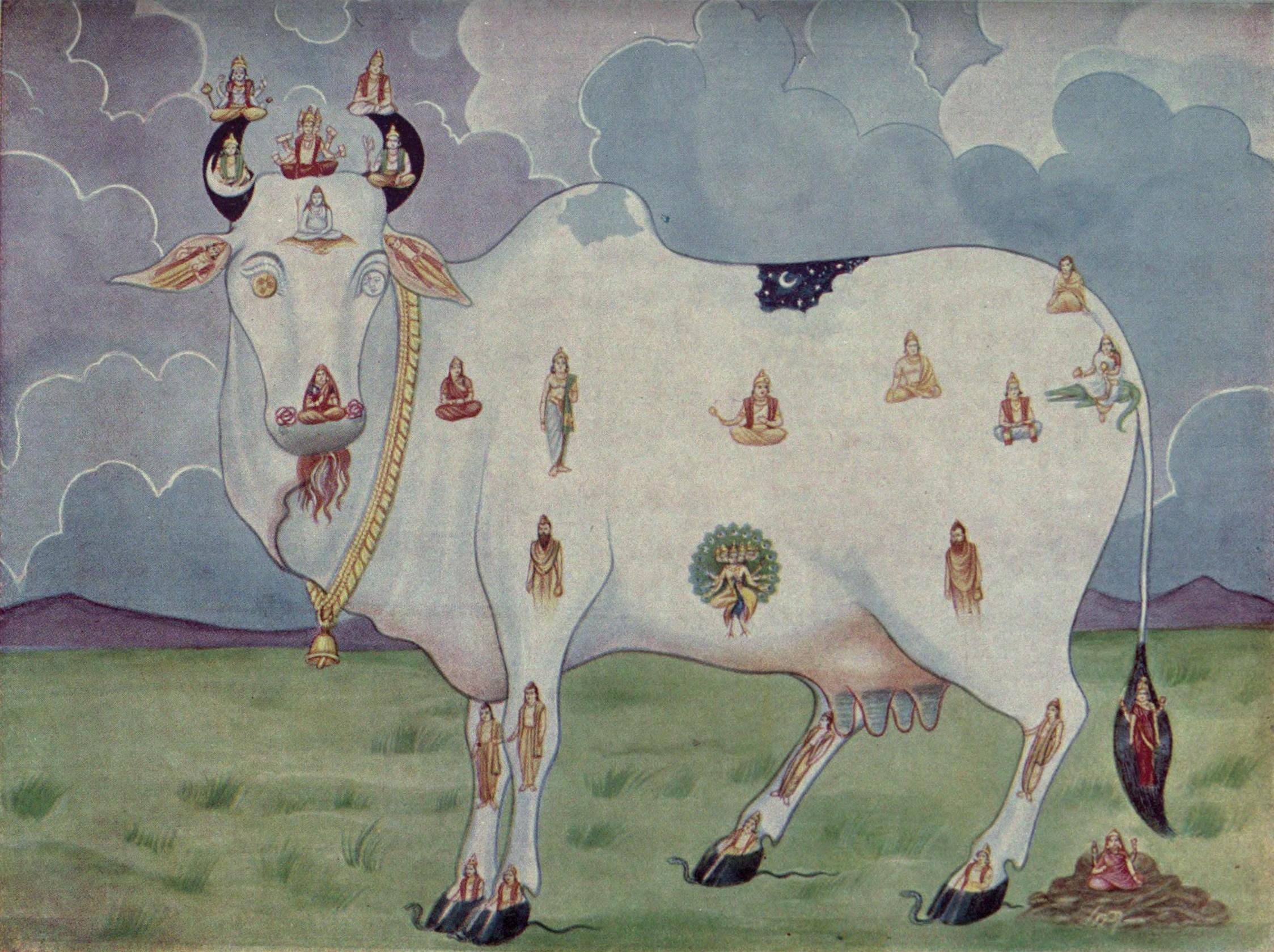 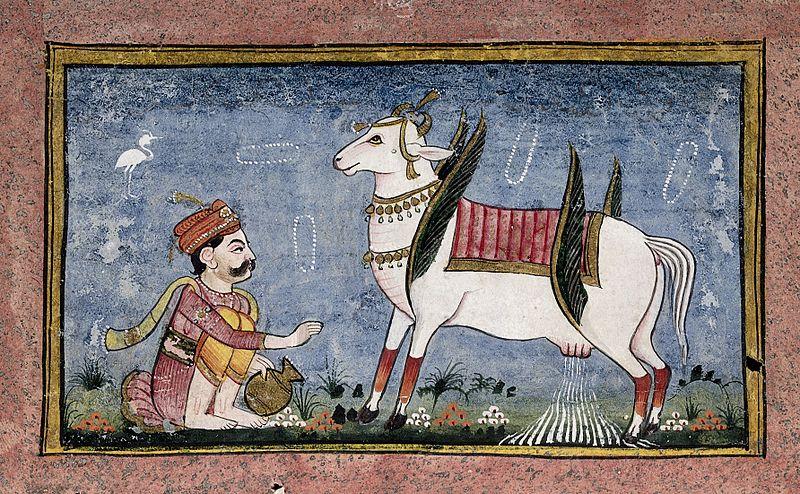 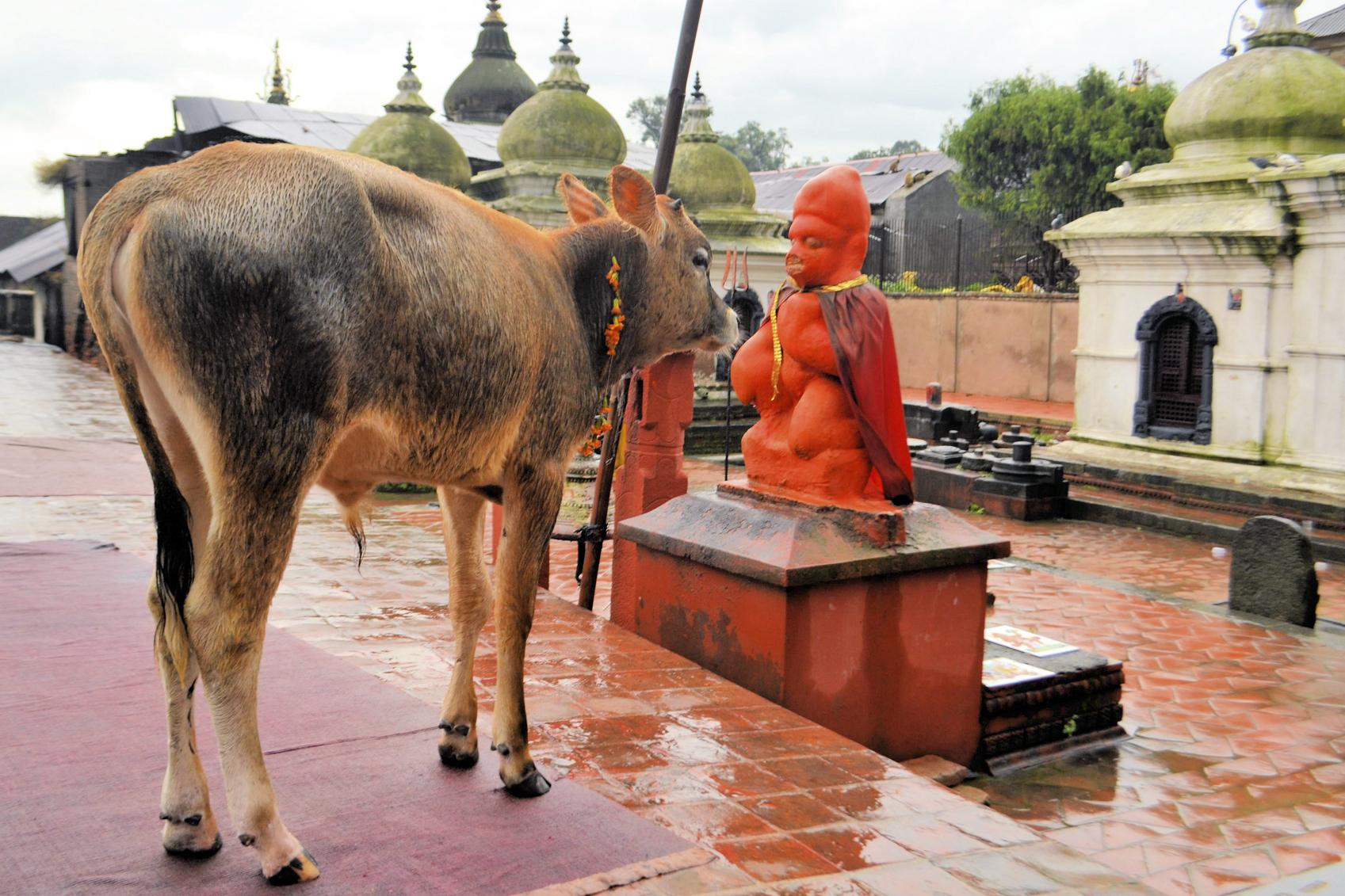 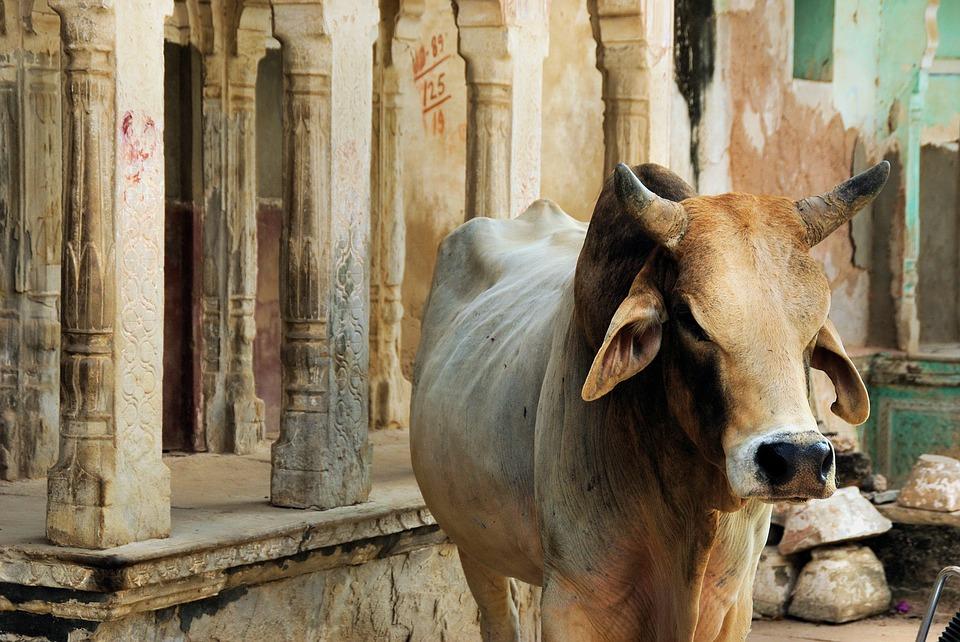 1 of 5
What is the Story of the Kamadhenu Cow?
Back to top