Why is Dog Breeding Bad? 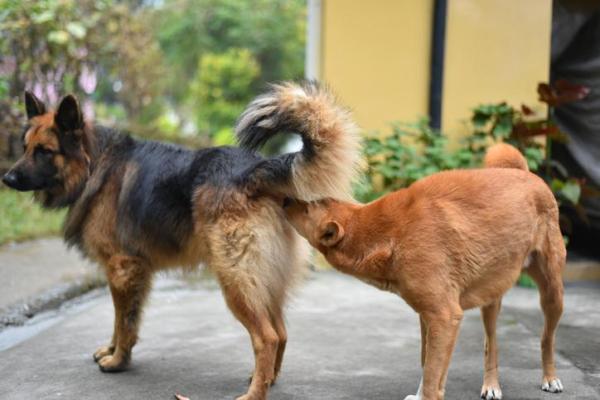 In this AnimalWised article, we deal with a topic which has raised the concern of many dog guardians. The topic of dog breeding is important because a dog will follow their natural desires and try to breed given the chance. It is also a controversial one due to the problem populations of dogs caused by unscrupulous breeders. Even well intentioned dog guardians can contribute to these problems. Knowing when dogs can breed is an important part of their responsibility, but there is more to know.

We answer the question, “Why is dog breeding bad?” In our answer, we look at issues which arise when a dog reaches sexual maturity and what is best for the dog.

You may also be interested in: When is a Dog Cesarean Section Needed?
Contents

At what age do dogs begin to breed?

Before we look into whether breeding dogs is bad, we should know more about dog breeding in general. The first is that dogs performing a humping movement doesn't necessarily mean they will reproduce. When successful mating does occur, it will only be on days when the female is fertile. This is important because many dog guardians see puppies mounting various things from an early age. In a litter, puppies will even mount each other.

Humping during development is a common behavior and not something we need to worry about. Dogs need to learn about their nature and how they interact with their environment. Mounting behavior is simply part of this natural process.

At what age is a dog fertile?

As explained above, the action of humping or mounting does not in itself imply a dog has reached sexual maturity. The criterion we need to take into account is fertility. When a dog is fertile is when they will be able to breed. There are different factors which affect how long it takes for a dog to be fertile.

Sexual maturity is different for male and female dogs. A male dog will become fertile when they are able to produce sperm. Female dogs reach sexual maturity when they begin their reproductive cycle. This is something commonly known as being ‘in heat’. However, there is no fixed time when this occurs for any dog. Part of this is due to breed. In general, smaller dogs will be able to breed sooner than larger ones.

However, even within the same breed, the time in which a dog reaches sexual maturity can differ. In general, a dog will reach sexual maturity between 6 and 12 months of age. Male dogs will generally become fertile before females. For some larger dog breeds, it can take individuals as much as 2 years to become fertile.

Although we cannot tell exactly when a dog will become sexually mature, there are signs we can look for. Male dogs will start to mount more regularly and with more force. They will also wander from home more since they are on the lookout for a potential mate. Even if they are toilet trained, the dog may begin urinating inappropriately in the home.

For female dogs the heat cycle will be the sign they are ready to mate. Their vulva will swell and create discharge. Females can also experience behavioral problems and may begin to yowl in an attempt to call out for a potential mate. For both females and males, the hormonal changes which occur during sexual maturity can lead to behavioral problems.

Is it bad not to neuter a dog?

The most prominent sign of a dog in heat is the swelling of their vulva. This swelling will be accompanied by a bloody discharge which can be very worrying for some dog guardians. Knowing what is a normal part of a dog's entry into adulthood and what is a sign of something more dangerous is important.

When the female dog is in heat, you will notice significant changes. They will urinate more often and will ‘present’ themselves to males when they feel ready to mate. This is done by lifting their rear and waiting to be penetrated. The heat period in female dogs will occur about twice a year. The reason this is bad for female dogs is that, without breeding, they will be very frustrated. Spaying prevents this frustration as well as many other problems, which we detail below.

Conversely, male dogs can be sexually active any time throughout the year, although there will be periods when this will be less so. They may also not show signs until they meet a female in heat which arouses them. Male dogs which are sexually mature can become competitive with other males, which can lead to fighting. They will also be more prone to run away, incensed by a need to mate and possible even becoming lost in the process. It is bad to not neuter the dog because they are unable to carry out these behaviors, even though their body is telling them they need to.

If you are worried about this issue, you can read our article on how to control a male dog around a female in heat for help.

Knowing when a dog wants to breed has a lot to do with male dogs. This is because generally dog breeding is due to a perpetuation of the species. While there is little scientific consensus to determine whether dogs have sex for pleasure (it is believed they do, but to what extent is yet unknown), it is wrong to attribute the same human sexuality traits to dogs.

For female dogs, they will only mate on the days when they are in heat. The male dog will try to mate when they see the female in heat, but only after they reach their own sexual maturity. This means dogs will want to mate in their own time.

Some people see not breeding dogs as sacrificing part of their nature. With spaying and neutering, this means they do not feel the need to mate and feel the accompanying frustration. However, it is also important to note that we have so many dogs because we have purposefully bred them, often in dangerous ways. We cannot solve a problem by continuing to contribute to it.

At what age can dogs have puppies?

We have seen the age at which dogs can mate and this matches the time at which they will be able to have offspring. Once the mating occurs, it is very likely there will be fertilization and a subsequent gestation of puppies. Although a female dog can have puppies from their first heat, it does not mean they should. This is because the dogs have not yet reached their full physical development, despite their sexual maturity.

For female dogs, they should not mate before the second or third heat cycle. For males, they need to wait between 18 and 24 months. The reason for this is because a male's lack of proper development means we cannot yet tell their health status. A male dog might have genetic defects which make breeding with them inappropriate as it runs the risk of certain diseases and conditions. Only after about a year and a half can they be properly examine to determine whether breeding dogs is advisable.

Unfortunately, with much of the unregulated dog breeding which takes place, many breeders do not adhere to these rules. In a need for profit, they breed dogs before they are ready. This is bad due to the physical damage this can cause, but also because of the psychological problems which can result.

Is it necessary to cross a dog?

There is a false myth about dogs which claims female dogs need to reproduce at least once to stay healthy. The origin of this myth likely originates in folklore, but it has no basis in veterinary science. There is some debate about whether spaying and neutering a dog improves their health. It is true that it can make certain health scenarios more likely, such as some links between obesity after castration, but they are far outweighed by the benefits.

One of the greatest benefits for neutering dogs is how it positively affects their character. Male dogs will not try to run away as much as they will be less likely to be aggressive (although this is not the only reason why a dog might be aggressive). In females, it will reduce the hormonal changes causes by the heat cycle as well as help to prevent situations such as phantom pregnancy. The surgical methods of both spaying and castration are now so advanced there is very little likelihood of complication. The dogs will not even need to be hospitalized.

Sterilization benefits not only the individual dog, but also the larger canine community. While many dog guardians love their dogs and feel like breeding them will make them happy, their actions are bad as they contribute to a worldwide crisis. Too much uncontrolled dog breeding has left many being abandoned, put in shelters or even killed because they could not be rehomed.

Another reason dog breeding can be bad is due to unethical practices. Unscrupulous breeders create puppy farms where dogs are kept in squalid and inhumane conditions. They are often removed from the mother too young which results in significant social problems later in life. Another problem is that selectively breeding dogs itself has complications. While it has resulted in many of the wonderful dog breeds we cherish, it has also lead to a massive increase in genetic disorders.

Breeding dogs may not seem cruel, but by putting more strain on an already inundated shelter system, we are inadvertently causing more grief and pain to dogs. Spaying and neutering a dog is the best way to help your individual dog and the larger dog community.

If you want to read similar articles to Why is Dog Breeding Bad?, we recommend you visit our Gestation category.

Bibliography
Why Is My Pregnant Dog Not Eating?
Signs Your Dog is Pregnant
How Long Is Labor In Dogs?
How to Know if My Hamster is Pregnant
Related categories
HeatExtra careGeriatricsEar careSkin careFur care
Most read
1.
When Does a Dog Go Into Heat After Having Puppies?
2.
Third Eyelid Showing in Cats - Causes and Treatment
3.
Why Is My Pregnant Dog Not Eating?
4.
Why Has My Cat Only Had One Kitten?
5.
Dog Pregnancy - Week by Week
6.
How do Horses Mate? - Horse Reproduction
7.
Possums as Pets: General Guidelines and Tips
8.
How to Control a Male Dog Around a Female in Heat
How Many Puppies can a Bull Terrier Have? Tips on Breeding and Pregnancy
My Dog is Aggressive After Giving Birth
How to Tell if My Guinea Pig Is Pregnant - Physical Signs and Behaviors
Why Has My Cat Only Had One Kitten?
How To Tell If A Cat Is Pregnant - Symptoms
How to Know if your Tortoise is Pregnant
Is my Dog about to Give Birth? Symptoms of Labor
Why do Cats Move Their Kittens?

Why is Dog Breeding Bad? 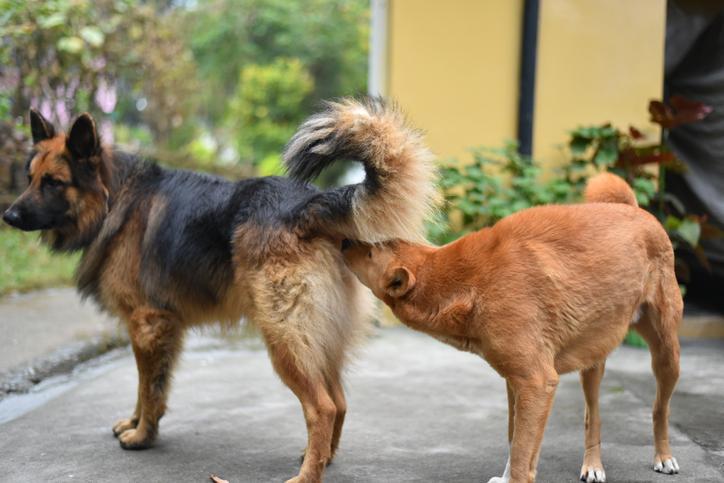 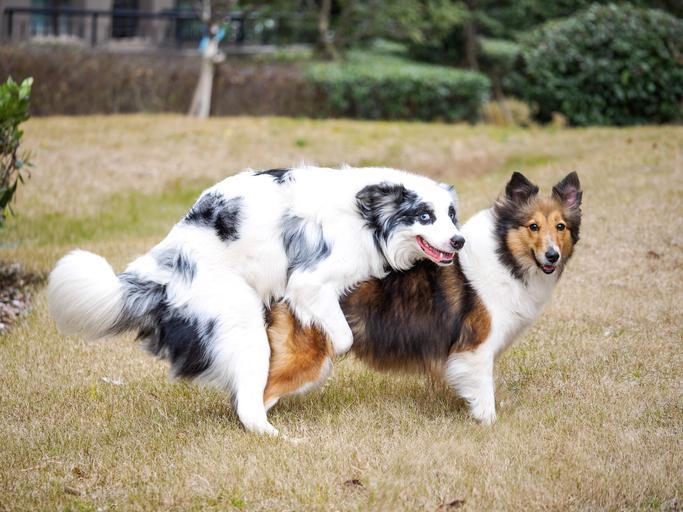 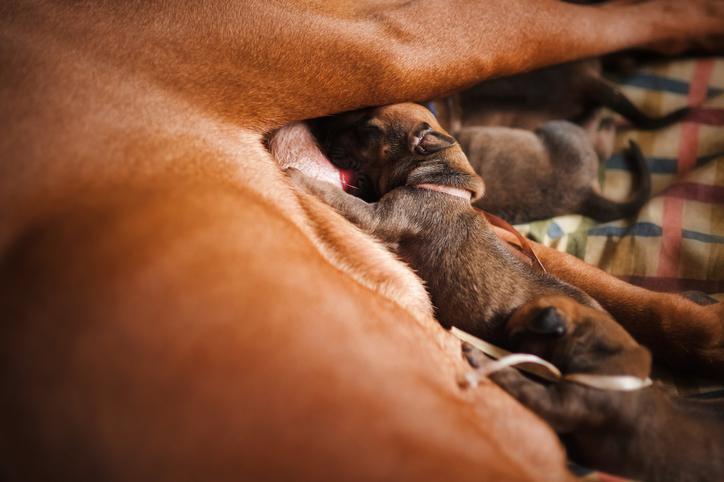