Why is My Cat Fainting? - Syncope in Cats

When a cat passes out, we will understandably grow concerned. Losing consciousness, even temporarily, is a sign of a problem. Whether this is a serious or minor health problem, finding out why is my cat fainting? is imperative. If there is a serious disease, then we need to achieve a diagnosis to find the right course of treatment. If the problem is minor, then we have at least ruled out a serious pathology.

Syncope in cats refers to the scientific term for fainting. It is caused by a lack of blood to the brain, but the reasons for this restriction of bloodflow are various. AnimalWised looks into causes of loss of consciousness in cats to help work out if your feline needs specific treatment or even some lifestyle changes.

You may also be interested in: My Dog Is Fainting - Syncope in Dogs
Contents

It is important to know that fainting is a temporary loss of consciousness. It isn't something which should last for a long period of time. If extended unconsciousness occurs, then there is something seriously wrong and can be a result of brain damage. When a cat suffers a case of syncope, the momentary loss of consciousness will cause the cat to fall over. They may pass out, land on the ground and get up immediately. However, they may remain unconscious for a period of time before they get up.

As we stated above, fainting in cats occurs due to a lack of blood to the brain. The oxygen in the blood helps our brain to function, so the lack of oxygen causes it to fail temporarily. This decreased blood flow could be due to low blood pressure, partial pressure of arterial oxygen or decreased hemoglobin concentration. When the cat faints, it may be accompanied by drooling or urinary incontinence, but it is important to note this occurs only in the minority of occasions.

In general, the cat with recover after a few seconds as episodes are normally short and sudden. When the cat wakes, they may be disorientated. This might lead to them being frightened or nervous, but they should return to normal relatively quickly.

Causes of syncope in cats

While we know the biological function of how a lack of blood to the brain causes temporary unconsciousness. It is a symptom and not a disease. The reason for this lack of blood is due to a specific problem. There are different pathologies or circumstances which can lead to fainting as a symptom. They include:

The veterinarian is the only person able to achieve an accurate diagnosis. They will be able to examine the cat properly and carry out any necessary to tests. If you suspect your cat is suffering from any of the diseases mentioned about, you need to go to the vet immediately. The sooner you go, the better the prognosis.

Other causes of fainting in cats

There are some other reasons a cat might faint, some of which are related to a pathology, others a situation. One which some may remember from a viral video is something known as ‘fainting goat syndrome’. This is known as congenital myotonia, a genetic disorder which cause animals to have a delay in the relaxation of their muscles. This is because the muscles contract when they get scared, but do not release their tension. The body seizes up and stays stiff for a few seconds.

During a fit of congenital myotonia, it looks like the cat is fainting, but they are no necessarily losing consciousness. It is their body stiffening which gives the appearance of passing out. It is important to point out how rare this disorder is in cats. It wasn't until 1998 that the first description of congenital myotonia was released[1].

A cat may also faint when they come in contact with another cat or different animal. It has been reported that a cat may trigger the vasovagal reflex. This is a “sudden decrease in both blood pressure and heart rate [which] has been observed in the cat in an emotional situation, i.e. when preparing to fight in response to an attack by another cat”[2]. This drop in blood pressure can result in fainting.

Also, a cat doesn't need to ingest poison to collapse. If a cat comes in contact with a substance which has strong fumes, their acute olfactory senses can pick up the smell which overwhelms them because it is so strong. This may result in a short fainting spell, but they will likely recover almost immediately.

What to do if your cat faints

If we see our cat faint, it can be traumatic for us also. Your first reaction might be one of anxiousness or even panic. It is important that you do not freak out as your cat will not benefit from having a stressful person around. Although i may be difficult, it is important to make an effort to remain calm.

Place the cat on a flat surface and hold their body between the torso and the hind legs. You lift their body up a little bit so their had is lower than the rest of their body. Do this very carefully so you can help stimulate the flow of blood to the brain. After the cat has regained consciousness, wrap them in a blanket so they do not lose body heat.

You should remain alert to any reaction which manifests itself during unconsciousness. These concurrent symptoms may be tremors, involuntary urination, drooling or vomiting. If you see your cat faints after vomiting, then help them by holding their snout down. This will prevent the cat from choking on their vomit while unconscious. You should remember as much as you can so you can relay important information to the veterinarian.

Wait until the cat regains consciousness which is unlikely to be more han a few minutes. Try to calm them down with petting and speaking in a calm voice. When you notice they are more relaxed, it is time to go to the vet. It is best to go on the same day as the syncope episode so the cause of fainting can be best determined. As syncope is a symptom, once the diagnosis has been given, the treatment can also be determined.

If you want to read similar articles to Why is My Cat Fainting? - Syncope in Cats, we recommend you visit our First aid category.

Why is My Cat’s Nose Bleeding?
Is Hydrogen Peroxide Safe for Cats?
My Cat Got Stung by a Bee
My Cat is Acting Weird After Flea Treatment
Related categories
Breathing diseasesDegenerative diseasesMental problemsMedicineNeurological diseasesCardiovascular diseases
Most read
1.
What to Do if My Dog has Something Stuck in his Throat?
2.
My Dog Keeps Licking Her Private Area - All Possible Reasons
3.
My Dog Is Bleeding from His Penis
4.
My Dog Has Pus Coming From His Penis
5.
Why Does My Cat Push Out His Penis and Lick It?
6.
My Dog's Poop Starts Solid Then Goes Soft
7.
My Cat Has Liquid Coming From Their Anus
8.
My Dog Keeps Making a Gulping Sound
How to Know if My Cat is Sick
Heat Stroke in Cats
Poisoning in Cats - Symptoms and First Aid
How to Make a Cat Vomit
How to Make an E-Collar for a Cat
First Aid for Cats: Road Accidents and Run Over Cats
Anaphylactic Shock In Cats - Symptoms, Diagnosis and Treatment
My Cat Was Stung by a Scorpion

Why is My Cat Fainting? - Syncope in Cats 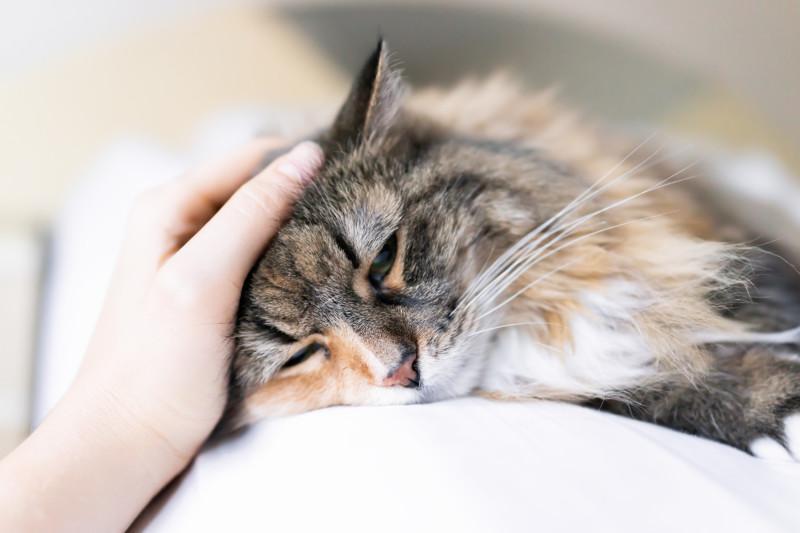 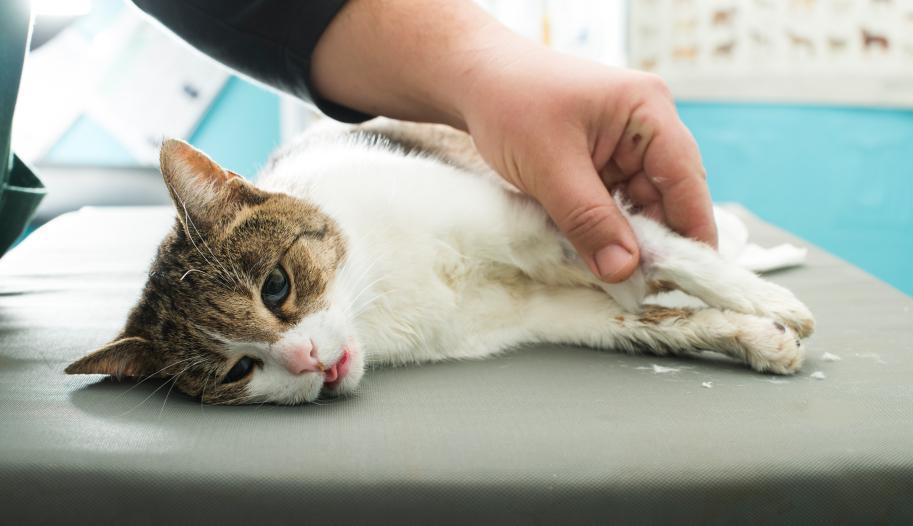 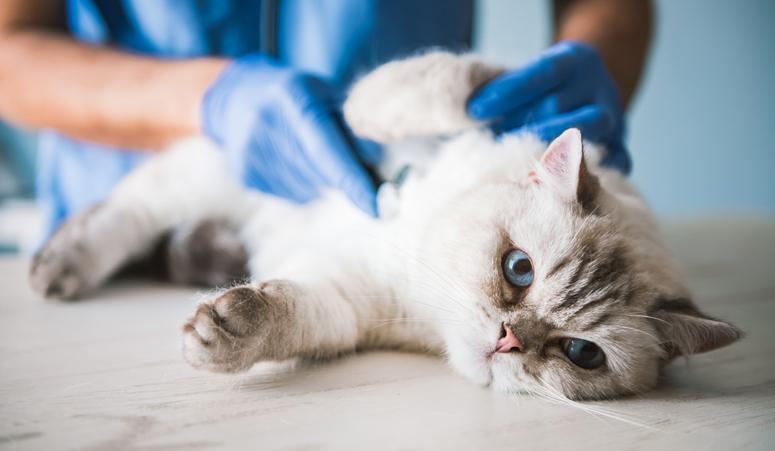 1 of 3
Why is My Cat Fainting? - Syncope in Cats
Back to top