The history of cat breeding is a rich and fascinating one. While different cats are bred to emphasize certain features, many of the initial cats from which the breeds originate seem to appear by magic. After kittens in a litter are born, we sometimes see one of them with certain distinctive and unique traits. It's a little like the movie Dumbo, except instead of elephants, they are cats and instead of big ears, they have long fur, no fur or anything in between. Of course, there are also cats with big ears and other distinctive traits as well. Breeders then try to breed the cats to emphasize the results, some successfully and some not.

Many of the cats in this AnimalWised list of cat breeds with wavy hair exist because of such selective breeding. What we have excluded are cats which simply have long hair. Long haired cats might have hair which curls from neglect, but these cats have hair which is curly or wavy in its natural state. Keep reading to discover more.

You will see on our list of curly and wavy hair cats that the term ‘Rex’ pops up a few times. While you might be right in thinking that Rex connotes a regal character, the term actually stems from a type of genetic mutation. Due to the use of Rex in their names, many people mistakenly think they all stem from the same animal. However, the nature of the rexed gene mutation means it can occur seemingly randomly, with the different breeds coming from different mutations.

Our first rex haired cat is the Cornish Rex which doesn't have fur in the same way as many other cats. The fur of many mammals is comprised of three different parts, but the Cornish Rex only has an undercoat, sometimes known as ‘down’. This is the soft, fluffy coat which protects from the cold, but on the Cornish Rex, it also happens to be very wavy. This wavy fur can come in many different colors and patterns, but all of these cats have an elegant and long body with idiosyncratic big ears.

As the Cornish Rex only has down for their coat, the breed does not need to be groomed often. Also, due to the delicate structure of their wavy curls, they shouldn't be brushed too harshly. Some claim the Cornish Rex does not shed, but this is untrue. They simply have less hair to shed, so they don't shed as much as a long haired cat like the Persian.

While it is true many of these breeds do not come from the same individual cat, there must be something wavy in water in the Southwest of England. This is because the Devon Rex is a cat originating in the neighboring county of Devon beside Cornwall where the Cornish Rex comes from. The topcoat of a cat's fur is called the ‘guard hair’. Unlike the Cornish Rex, the Devon Rex does have some guard hair, just relatively little. This means their fur looks a little thicker, but is no less wavy.

Devon Rex cats also have a distinctive head shape, with long bat-like ears. Some even think this makes them look a little alien-like, perhaps exacerbated by the strange noises this vociferous breed likes to make. Their strangeness in looks is only matched by their playfulness of character. They love to climb, whether on objects or on people. They often hang over the shoulders of people and can even be taught to perform tricks. Their wavy fur can be of almost any color and pattern. If they their fur is curly, but they have the color point coat pattern of a Siamese cat, they are known as a Si Rex.

Perhaps the curliest of these wavy haired cat breeds, the LaPerm has a very appropriate name. Like Dolly Parton in the 80’s, this cat breed is named after the ‘permanent’ hairstyle, perhaps the curliest of all dos. However, the LaPerm does not need any heat or chemicals to get their characteristic wavy style. Instead, a natural genetic mutation has created one of the waviest of all cats.

The LaPerm has more hair than the Cornish Rex, but unlike this cat, they do not have much of an undercoat. LaPerm cats can be longhair or shorthair, but they will always be wavy. They won't always be the same type of wave or curl, however. Some have thick ringlets, others have lines of tight waves. Whatever they look like, they will need to be groomed. This is especially in case the fur gets matted or tangled, which can happen easily. As LaPerm cats can be great indoors and out, being careful of their fur is important if they spend time in places where they might get dirty.

Weighing in at between 3 and 7 pounds, the Skookum is one of the smallest cat breeds as well as being one of the waviest. As a cross between the LaPerm and a Munchkin cat, the Skookum gets its wavy fur from the former and its small stature from the latter. As with many of the breeds on this list, the color and pattern of the coat can vary greatly. However, as they have been bred for such a small size, they are born with a condition known as achondroplasia which is a form of dwarfism. This gives them their small stature, but it also presents a possible health risk. As this breed has only been around since the 1990s, it is difficult to determine the exact risks involved.

Despite their small stature, Skookum cats have big personalities and are found of jumping and climbing. This is the case even if they are not as agile and acrobatic as some other breeds. Their wavy hair curls out from the body and often has a fuzzy appearance. Like other breeds on this list, not only do the Skookum cats have wavy fur, but their whiskers and eyebrows are also curled.

Not as curly as other cats on this list, the Ragamuffin is nonetheless a wavy haired cat. Their fur is known as ‘substantial’ as it is very thick and long, having all three layers of hair in abundance. Due to the amount of hair, you can see that the fur along its body goes in waves. However, despite this great amount of fur, the Ragamuffin is not prone to matting or clumping. They do still need lots of grooming to get rid of excess dead hair. You can see the wavy fur particularly under their chin and on their tail, but some individual cats are wavier than others.

The Maine Coon appears in a lot of cat breed lists, such as the longest haired cat breeds, most affectionate cat breeds and is somewhat controversially added to this wavy haired cat breed list. This is because not all of these cats are of a uniform appearance. They also have wavier hair in the winter when their coats are longer. However, many have such lovely long hair, you can see it forms waves on the body, especially around the neck and abdomen.

Surprisingly, these cats don't need as much grooming as others. This is because their undercoat is not as dense as other breeds. However, this doesn't mean they don't need regular grooming. They are relatively independent, but they will form strong bonds with their human family, even if they are cautious with strangers.

While the origins of the Chantilly-Tiffany are not completely known, it is believed to originate from a mix between a Havana Brown and an Abyssinian Longhair. Their coat is dense, but is similar to the Maine Coon in that it does not have much of an undercoat. This long guard hair and awn hair (the latter being between the under and outer-coats) turns to waves on the flanks, neck and underbelly. It is not curly like the Rex breeds, but is particularly wavy in the winter.

Unfortunately, the wavy hair of the Chantilly (often shortened as there was another breed known as the Tiffany in development at one stage) doesn't always maintain its luster. This is because the Chantilly is known to sometimes overgroom themselves, resulting in bald patches and hairballs. Grooming every other day is recommended. They are also in need of a lot of socialization. As they form strong bonds with humans, if they don't get the right amount of interaction, they can grow stressed which can lead to alopecia.

A much lesser known Rex breed, the German Rex is not recognized by all cat associations. However, there is a breed history which recognized the mutation of the curly haired coat and was bred for their appearance and caring temperament. Their coat is not as long as the LaPerm, but it is not as slight as the Cornish Rex. They are wonderful pets and their wavy fur makes them lovely to look at.

Only the LaPerm, Cornish Rex, Devon Rex and the last breed on our wavy haired cat breeds list, the Selkirk Rex, are internationally recognized Rex breeds. There are other Rex breeds, but they are either too rare or too early in their development to be recognized by all authorities. The Selkirk Rex is perhaps the waviest of all wavy haired cat breeds. Unlike some cats on this list their waves and curly are all over their body. not all Selkirk Rex cats are alike and it depends on which gene is dominant. There are longhair and shorthair varieties, this gives either a tight curl or long ringlets of waves depending on the individual cat.

Regardless of being longhair or shorthair, the Selkirk Rex has the full three layers of fur. This gives them their thick coat which can come in any color and pattern. Even their whiskers are curly. They need regular grooming as matting can occur. Like the other Rex breeds, they generally make wonderful pets and can be very playful when they want to be. They work great with other cats, but need proper socialization. They are relatively free of health problems, but keeping care of that wavy coat is imperative to maintain their well-being.

If you want to read similar articles to Cat Breeds with Wavy Hair, we recommend you visit our Fur care category.

What Dog Breeds Should Not Be Shaved?
My Cat's Hair Is Not Growing Back
Cutting a Golden Retriever's Hair
Types of Tabby Cats - Is there a Tabby Cat Breed?
Related categories
GeriatricsDental hygieneHeatGestationEye careExtra care
Most read
1.
When Does a Dog Go Into Heat After Having Puppies?
2.
Third Eyelid Showing in Cats - Causes and Treatment
3.
Can You Touch Newborn Puppies?
4.
Why Is My Pregnant Dog Not Eating?
5.
Dog Pregnancy - Week by Week
6.
How do Horses Mate? - Horse Reproduction
7.
How to Control a Male Dog Around a Female in Heat
8.
Is my Dog about to Give Birth? Symptoms of Labor
Haircuts for Old English Sheepdogs
Can You Cut Pomeranian Hair at Home?
Home Remedies for Matted Dog Hair
Why You Should Never Dye a Dog's Hair
How to Stop a Dog Shedding Hair
Tips to Deal with Matted Fur on Cats
My Rat's Hair is Falling Out - Causes and Treatment
How to Brush Your Dog's Hair 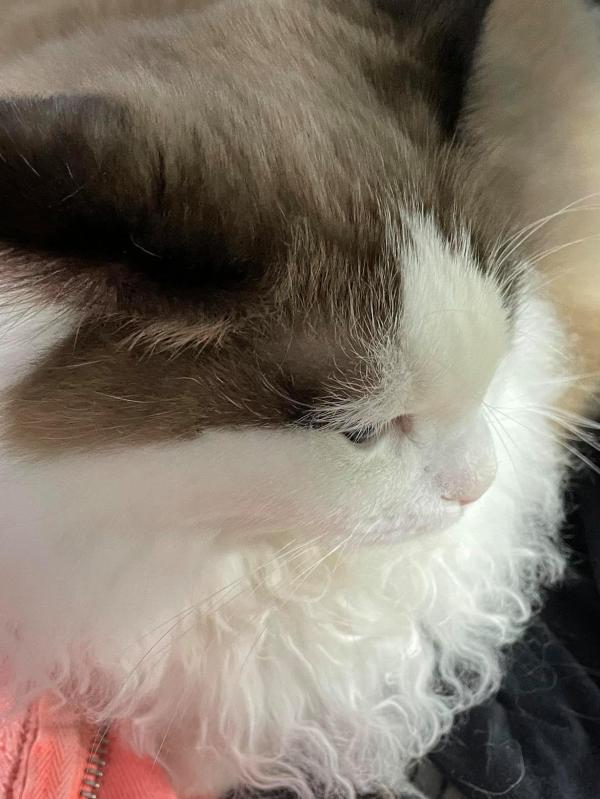 I've got an 8 month old Ragdoll kitten from a TICA breeder who has curling chest fur. I brush her and her curly hair persists. It is adorable looking ~ a very special touch. She also has a lovely white blaze on her back. I'm posting a photo of her lil' chest of curly fine fur.

Administrador AnimalWised
23/12/2020
Thank you so much for sharing, she is beautiful!
Cat Breeds with Wavy Hair 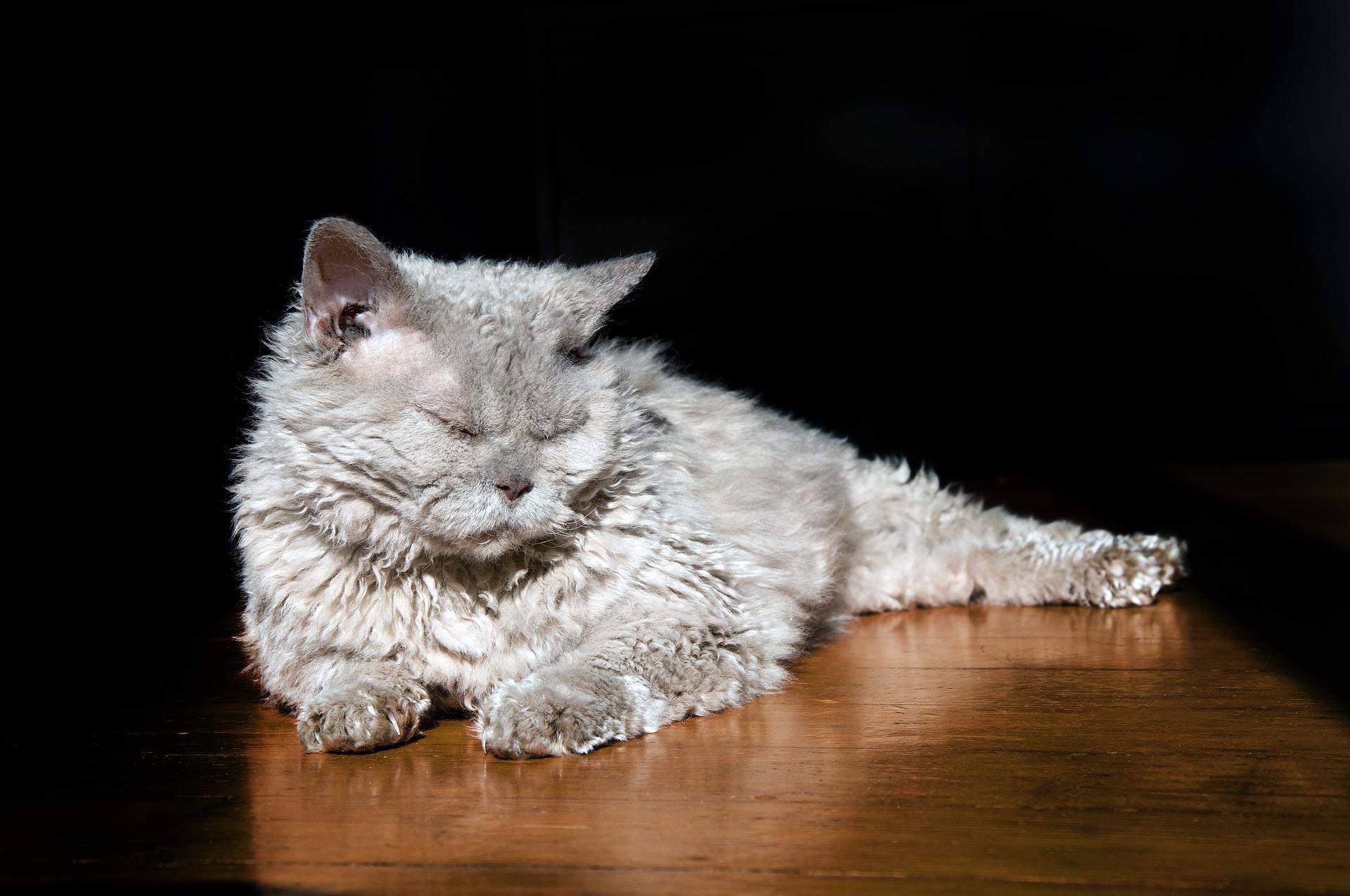 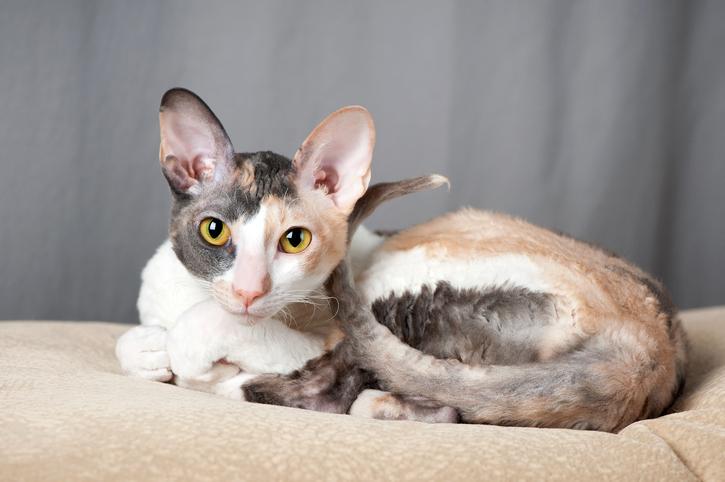 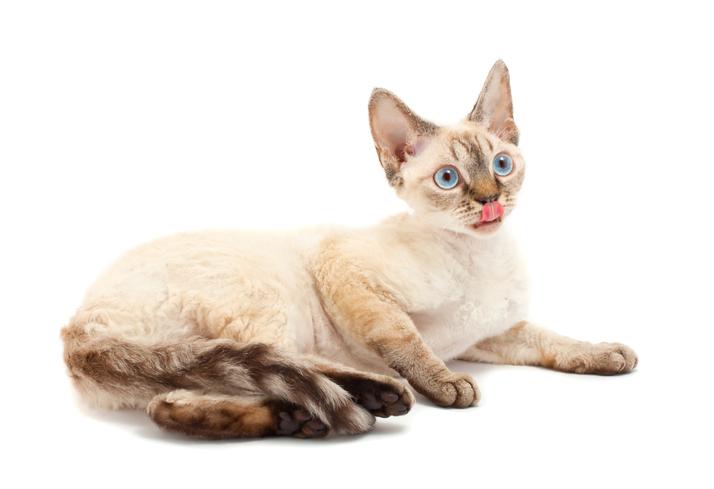 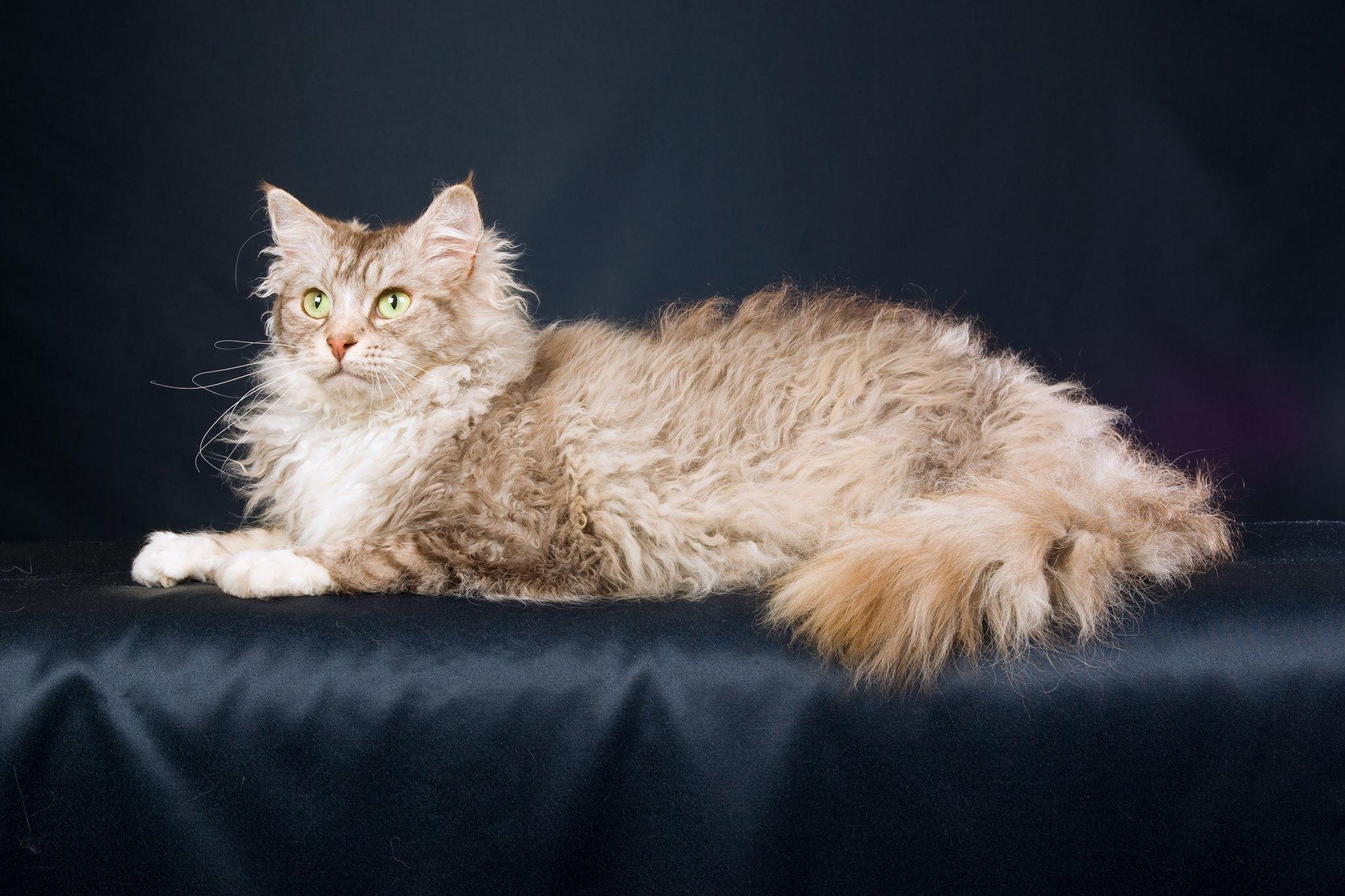 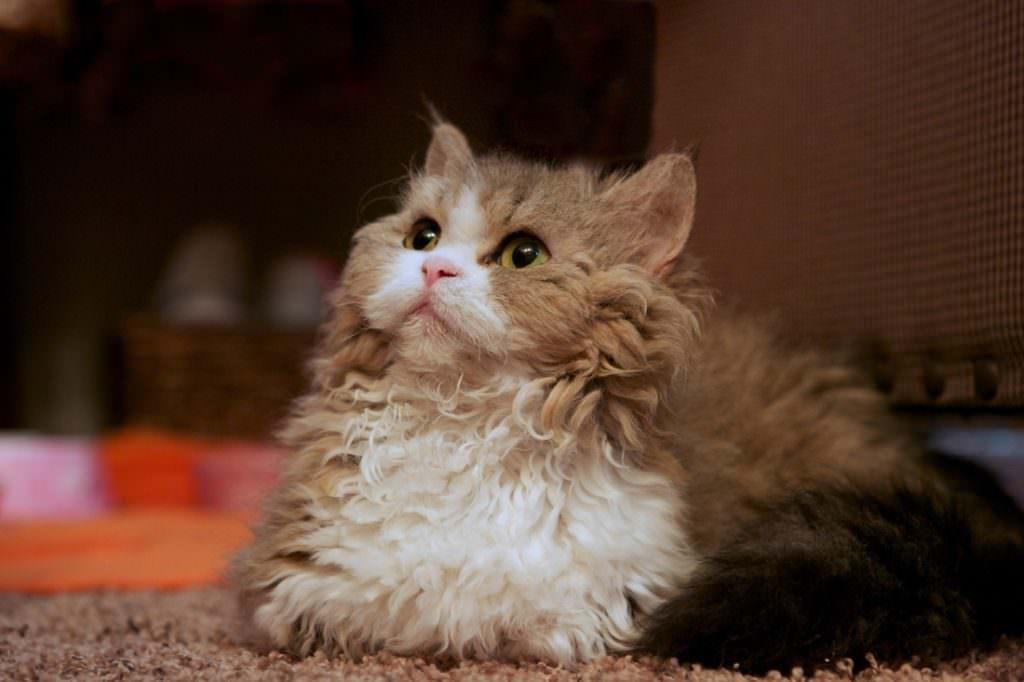 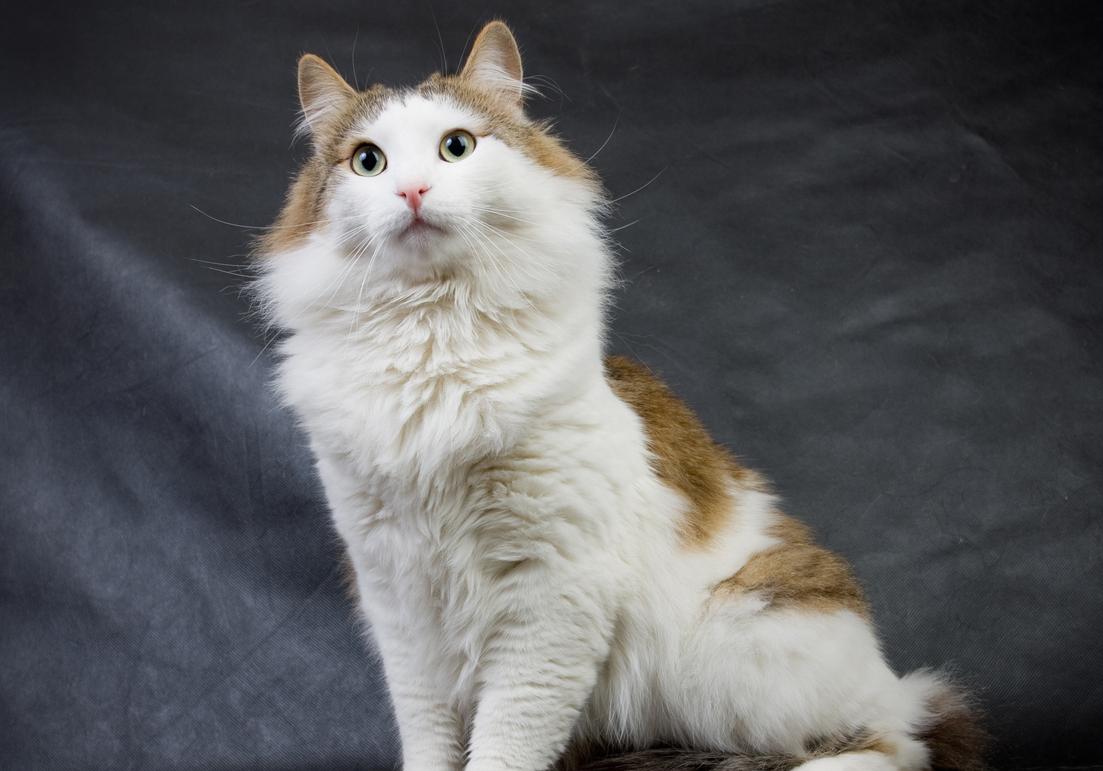 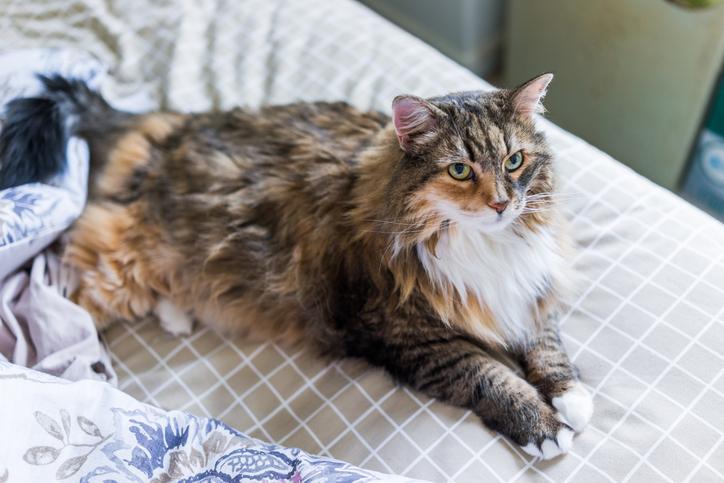 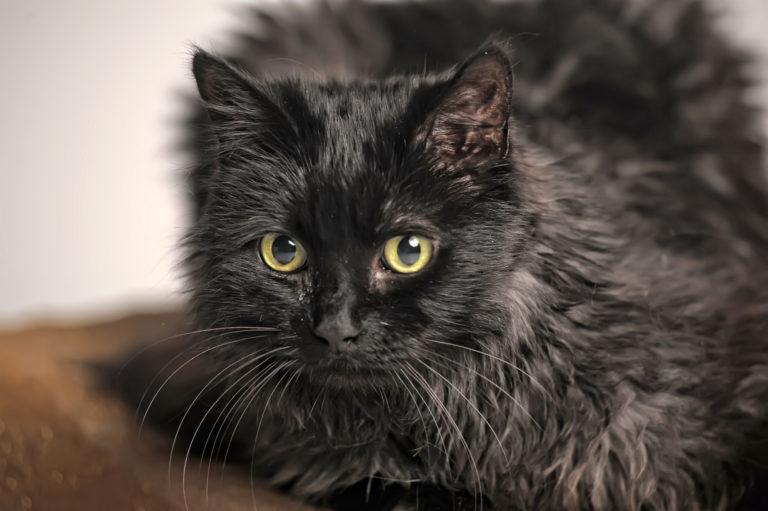 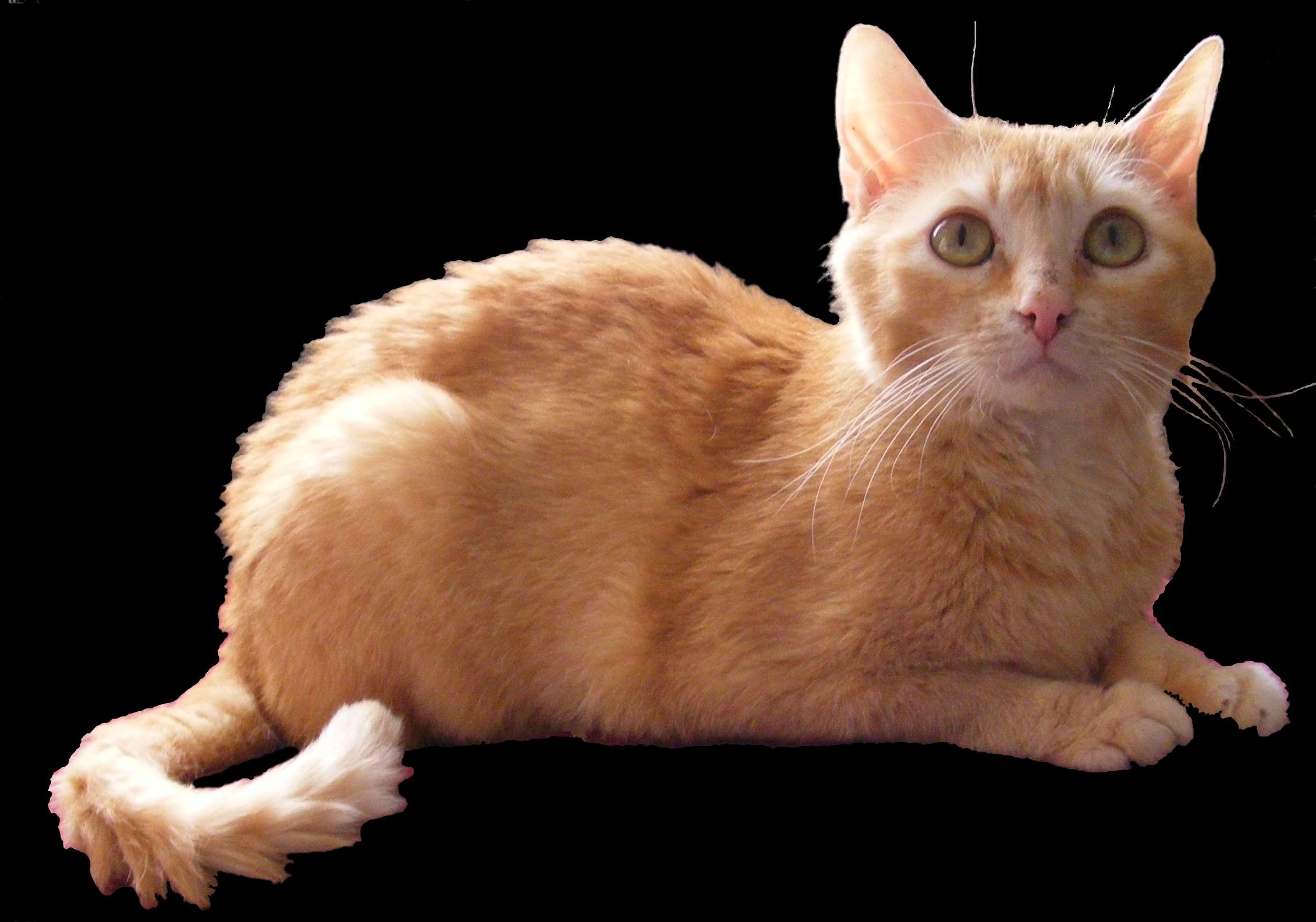 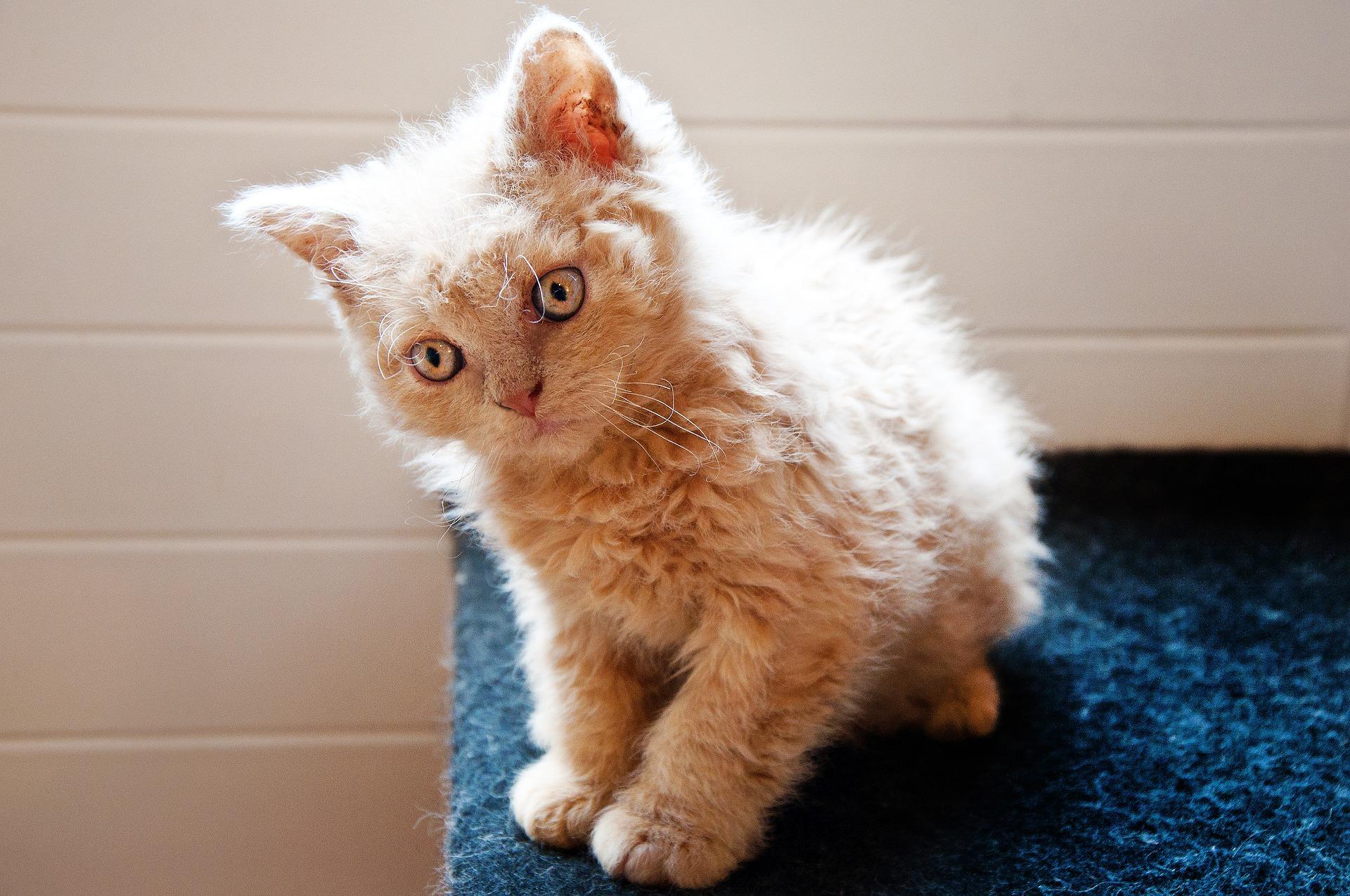 1 of 10
Cat Breeds with Wavy Hair
Back to top