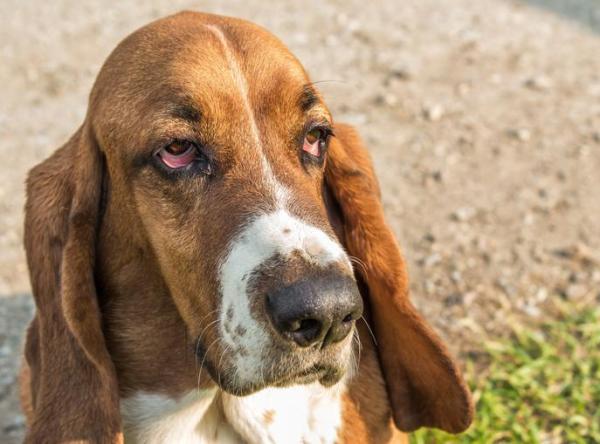 It's not that Basset Hounds aren't capable of expending a lot of energy. They are a French dog breed which was originally employed for hunting, so they are capable of chasing and tracking when they want to. It's just that most families with a Basset Hound know that they are their own dog. This is represented by their look which gives off an air of extreme aloofness, but this is not entirely the case. Basset Hounds are renowned for their stubbornness, but they can also fare well under training and they very friendly and playful dogs. Really, they're just pretty chill when it boils down to it.

As loving and characterful companions, we want to have our Bassets by our side for as long as possible. This is why AnimalWised takes a look at the most common health problems in Basset Hounds so that we can spot any symptoms early and engage the right treatment when necessary.

Thrombopathies or thrombocytopathies comprise various inherited or acquired disorders affecting blood platelets and damaging their functionality. Platelets are blood cells that fulfill the function of activation, adhesion and aggregation, directly affecting the blood's ability to coagulate and heal. Diseases like thrombocytopathies interfere with these functions and prevent platelets from clumping and adhering. As a result, the body's ability to heal is impaired and becomes more prone to bleeding and hemorrhaging.

Any dog can develop a thrombocytopathy, but some dogs are more prone due to characteristics inherent in their genetic makeup. According to research carried out by the Sir James Dunn Animal Welfare Center, the Atlantic Veterinary College, the Prince Edward University of Iceland and the Canadian Veterinary Medical Association shared in the canine inherited disorders database (CIDD), one of these inherited disorders particularly affects the Basset Hound. Known ‘Basset Hound thrombopathy’, it occupies the first place on list of health issues affecting Basset Hounds. Its main symptoms include:

Seborrhea (or seborrheic dermatitis) in dogs affects their scalp and leads to the excessive production of sebum by the sebaceous glands. Its main symptoms are usually the formation of scabs or crusting as well as accumulation of fatty oils. Additionally, these fatty oils can produce a very pungent and unpleasant odor, especially when acute and spread across their fur. In general, the most affect regions are the face, legs and torso.

This type of dermatitis is fairly common in dogs, often appearing as a secondary symptom of another health issue such as allergies, nutritional deficiency, parasitical infestation, metabolic (or endocrine) problems, autoimmune pathologies, skin cancer and others. However, some breeds show a genetic predisposition to developing so-called primary seborrhea, considered to be a hereditary disease. These breeds include the Basset Hound as well as the Cocker Spaniel, Labrador Retriever, Shar Pei, Golden Retriever, German Shepherd, West Highland White Terrier and others.

Due to its physical morphology, Basset Hounds are particularly susceptible to spinal problems, intervertebral disc disease (IVDD) being one of them. This occurs when the soft cartilege discs located between the vertebrae wear out and break (or herniate), generating a compression of the spinal cord.

IVDD is one of the most frequent diseases found in the Basset Hound, a well as similarly shaped breeds like the Dachshund and the Welsh Corgi, according to the CIDD. However, it can affect other dogs and cats, although less frequently. Its symptoms may vary according to the degree and location of the compression to which the spinal cord is subjected. Generally they include the following conditions:

Wobbler syndrome comprises different severe chronic degenerative disorders affecting the vertebrae and invertebral discs of the cervical spine (neck). These disorders lead to excessive compression of the spinal cord and nerves located in the neck. Although more frequent in larger dogs such as the Doberman Pinscher, it is also common in the Basset Hounds thanks the curvature of their spine.

Genetic predisposition appears as the main risk factor for Wobbler Syndrome in dogs. However, some dogs may suffer displacement of the intervertebral discs as a consequence of heavy trauma in the cervical region.

The initial symptoms are difficult to recognize in dogs as they include a headache and a stiff neck. With the advancement of the disease, more visible signs appear such a strafing or a wobble in their gait, from which the name of the condition is derived. Loss of balance is also common. If such symptoms are observed, don't hesitate to take them to the vet for evaluation.

Eye problems in the Basset Hound

There are several diseases which are known to affect the Basset Hound. The most common according to the CIDD are:

Glaucoma in dogs is a degenerative disease which affects the eyes of our canine friends, eventually resulting in loss of vision. The clinical picture is characterized by an excessive accumulation of aqueous humor (a watery fluid in the eye) and a progressive increase in intraocular pressure. Ocular hypertension accelerates the degeneration of the retina and optic nerve, the reason why glaucoma can result in partial loss of vision or blindness.

Glaucoma can be acute or chronic. Like all degenerative processes, glaucoma has an important genetic element. It can also develop as a consequence of some underlying disease. In either case, it is a silent disease with initial non-specific symptoms which are difficult to identify in dogs.

To enable an early diagnosis of glaucoma, it is important to be aware of changes in behavior and your furry friend's appearance so you are able to recognize the first signs. These include:

Ectropion and entropion in the Basset Hound

Entropion and ectoprion are two different diseases which affect the eyes of dogs, especially their eyelids. Both pathologies can be primary, i.e. they develop from a malformation of the dog which reveals an important genetic predisposition. However, secondary contraction of these diseases can also occur due to environmental conditions or as the symptom of another underlying pathology.

Entropion in dogs occurs when the edge of the eyelid is bent inward either totally or partially, being in direct contact with the eyeball. Its main symptoms are:

In ectropion, the edge of the eyelid bends to the outside, exposing the palpebral conjunctiva (inner portion of the eyelid). Among its main symptoms are:

In the Basset Hound, ectropion and entropion are associated with the morphology and standardization of the breed. Although the appearance of their ‘sad eyes’ has been incorporated as an ‘attractive’ feature of the breed (a look given to many animated characterizations such as Droopy the Dog), it is essential to be aware of the symptoms of ectropion and entropion. This is becuase both diseases can cause a lot of discomfort in the animal.

Elbow dysplasia in dogs is a degenerative disease which unilaterally or bilaterally affects the elbow joint (either on one or both sides). It originates during their developmental stage when the bone tissue undergoes an alteration and cannot develop properly.

In the first phase of the disease, the dog experiences an inflammation in the joint (arthritis) which can lead to oesteoarthritis. This is a progressive wearing of the structures which make up bone and joint tissue.

Its symptoms usually appear in the first 6 months of the dog's life, including the following signs:

While the hereditary factor plays a role in elbow dysplasia, there are also other risk factors which can accelerate joint degeneration. The main two are obesity and inadequate physical exercise. This is why is so imperative, perhaps more so with dogs like the Basset Hound, to take care with their nutrition and amount of activity in which they engage.

Panosteitis in the Basset Hound

The self-limiting inflammatory process known as panosteitis affects the bones of the extremities of dogs. It mainly occurs during their developmental stage up to 18 months of age. Symptoms include:

It is usually a short-lived disease, its treatment generally consisting of administering to the pain and improving the patient's living conditions. However, it is also essential to analyze the animal's state of health to rule out any possible underlying disease which may have caused the bone and joint inflammation.

Any dog can develop panosteitis, but it is most common in medium or large breeds. Genetic predisposition plays a key role (why Basset Hounds are prone to it), with obesity and lack of adequate exercise being contributing factors.

Obesity in the Basset Hound

The Basset Hound is one of the dogs which are more disposed to obesity than others which is why their diet and nutritional requirements need special attention. The amount of physical activity they receive is also paramount. Unfortunately, many guardians believe the plump appearance of the Basset Hound is a tender trait which should be encouraged. In actuality, obesity is a progressive disease which worsens over time, resulting in very negative consequences for the dog's health.

This is why the dog needs to be treated quickly after initial detection of the first symptoms. Obesity is something which should be prevented from the beginning and throughout the life of the Basset Hound. Diabetes, joint problems, cardiovascular issues and many other diseases are associated with obesity. We discuss this further in our article on the causes and consequences of obesity in dogs.

Other common diseases of the Basset Hound

Although the aforementioned issues are the main pathologies which affect the Baset Hound breed, they are not the only ones. The following are also risk factors:

While these are the most common diseases and health problems in the Basset Hound, it is very important to be vigilant in maintaining the overall health of our dogs. As they cannot vocalize the state of their mental health in an intelligible manner, we need to look at the forms of communication dogs use to convey problems with their health. Mainly this involves body language and behavior.

This article is not a replacement for a vet's advice. If there is any concern over a dog's well-being, they need to be taken to a veterinarian for expert consultation.

If you want to read similar articles to Common Health Problems in Basset Hounds, we recommend you visit our Prevention category. 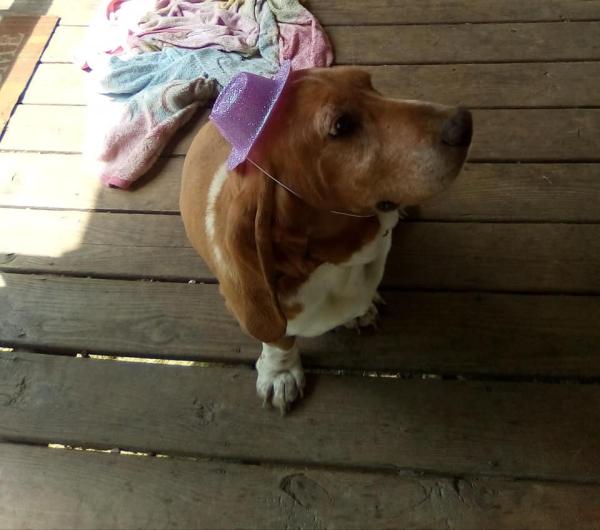 My Bear, also extremely healthy right till the cancerous mass in his throat & chest, He was 13 1/2...This pic was taken for his 12th birthday...He lovd me dearly, my constant shadow & that cold wet cose constantly bumping into the back of my legs..Goofy & afraid of his own shadow but loved his (twinkies).. He's been gone just 2 mts.
Rating:
Bilbo Baggins
25/08/2020
Elderly bassett hound plagued with skin tags that grow so large that they have to be surgically removed. What feeds skin tags and can they be prevented from growing so large?

Science is not 100% what causes skin tags. Some suggest it might have to do with friction, particularly in skin folds. This would make sense with a Bassett Hound if they have folds. However, there are likely other causes including viruses, genetics, etc. If your dog has been examined by a veterinarian and is otherwise healthy, you may not need to do anything. If you want them removed for cosmetic reasons, a vet can likely do it without surgery, depending on their size.
Debra S Queen
27/08/2018 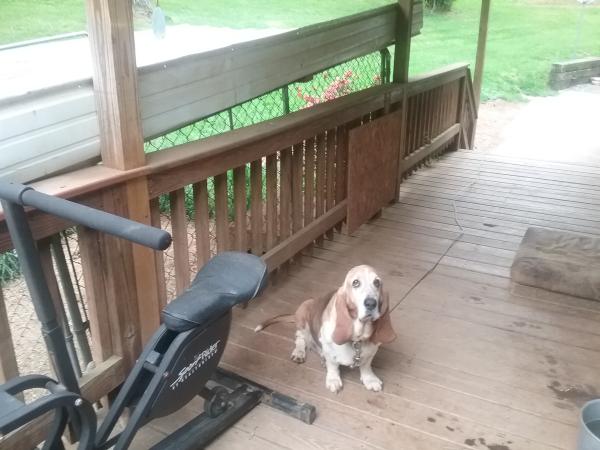 Lost my Queenie to cacer 3 yrs ago. She was 13 yrs and healthy till the cancer.

She was beautiful. We are sorry for your loss
Armand Gallanosa
10/06/2020
what a beautiful girl
sorry for her passing :(
Common Health Problems in Basset Hounds 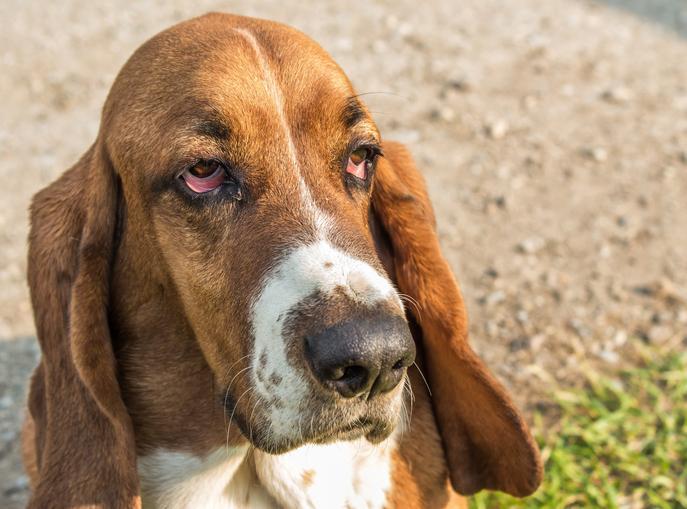 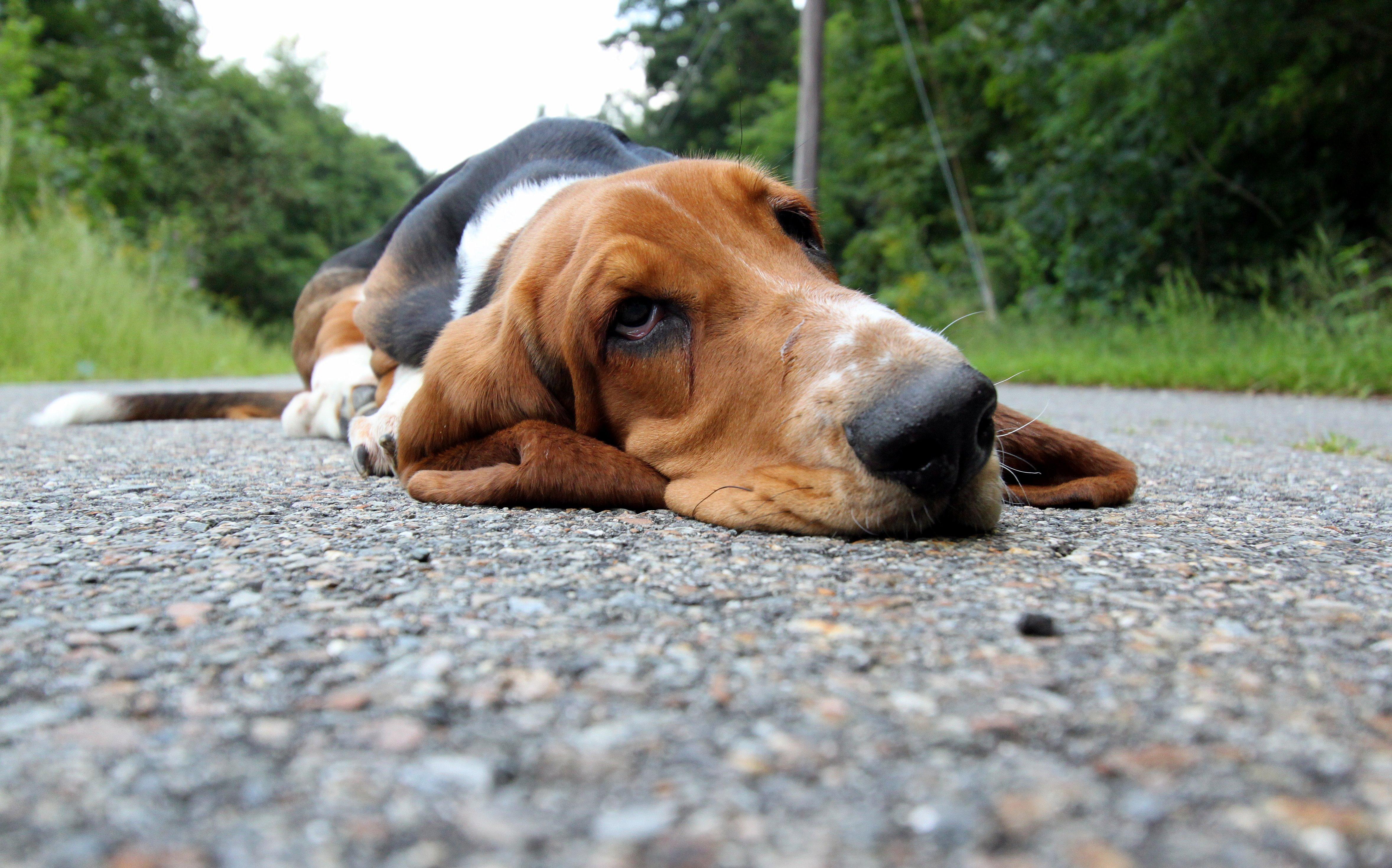 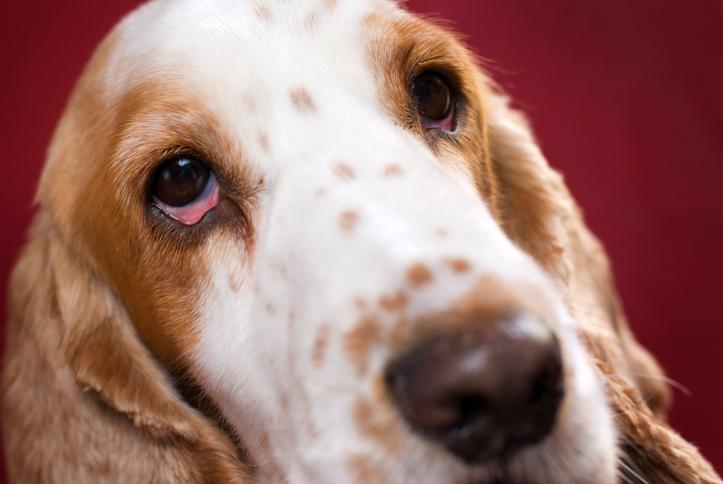 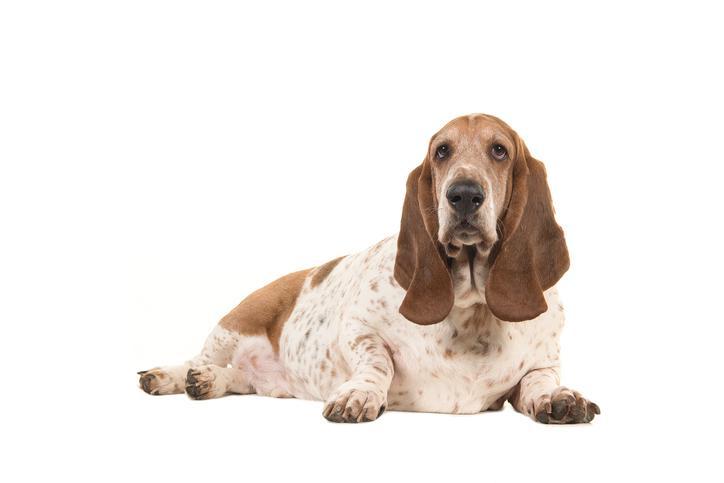