Differences Between a Jaguar Vs Cheetah Vs Leopard

By Nick A. Romero, Biologist and environmental educator. April 8, 2021

Big cats are harder to observe than their domestic cousins, but this often makes our fascination with them all the stronger. They all come from the Felidae family, meaning they share certain traits and similarities. They are expert hunters, have excellent vision, can run at high speed and are extraordinary stealthy. Their teeth and claws are tactical weapons which can eviscerate their prey with ease. However, they do have differences which can help us distinguish between certain big cats, including the jaguar, leopard and cheetah. Some are more pronounced than others.

At AnimalWised, we make a comparison of the differences between a jaguar vs a leopard vs a cheetah. We show you how they differ in appearance, habitat, behavior and anything else of importance.

You may also be interested in: Differences between a Cheetah and a Leopard
Contents

Jaguar vs leopard vs cheetah - taxonomy

These three felines belong to the class Mammalia, order Carnivora and family Felidae. Regarding the genus, the cheetah corresponds to Acinonyx, while the jaguar and leopard are of the genus Panthera.

The taxonomic names of each species are as follows:

Since all three animals are big cats, they are quadrupeds with tails and bodies covered in fur. However, there are key physical differences which can help us to distinguish between them.

Physical characteristics of the jaguar

Although their bodies tend to be slender and legs relatively short, they are muscular and powerful, with large heads and fairly strong jaws. What they lack in speed, they make up for in power and strength. Their coat coloration can be pale yellow or reddish brown, with the presence of pronounced black spots. These spots vary in shape, but are all a variation of the rosette pattern. This pattern presents all over the body.

The belly, neck and outer area of the legs of the jaguar are white. Some individuals may present melanism, a condition where they overproduce the pigment melanin leading to a saturation of dark color. The result is a completely black jaguar, known more commonly to us as a black panther.

Physical characteristics of the leopard

As for leopards, they have shorter legs relative to their long bodies, with a broad head and massive skull. This affords them a large jaw with powerful muscles. They have specialized muscular bodies which allow them to climb easily.

The color of leopards ranges from light yellow to reddish orange. They also have black spots all over the body, which can vary between circular or square in shape, forming a less pronounced rosette. The body pattern is unique to each individual. As with jaguars, the presence of a dominant allele can lead to melanism and an all black leopard, also known as a black panther.

For their part, cheetahs are thinner, have longer limbs compared to the body, and small rounded heads. They characteristically have a black stripe running from the inner corner of the eye to the snout. Their weight is between 20 and 72 kg (44 to 159 lbs), while their length is between 112 and 150 cm (44 to 59") and a height of 67 to 94 cm 26 to 37"). The color varies in intensities of yellow and they present small, black and rounded spots all over the body, without establishing a particular shape as in the previous species.

Distribution and habitat of the jaguar, leopard and cheetah

Jaguars are the largest felines in America and the only current representatives of the genus in this region. Their range of distribution has been considerably reduced, to the point of disappearance from several areas. At present, they are distributed irregularly from the southwestern United States to Central America, passing through the Amazon to Argentina.

They can be found in the United States, Mexico, Honduras, Nicaragua, Costa Rica, Guatemala, Panama, Brazil and Venezuela Suriname, Belize, Guyana, French Guiana, Colombia, Ecuador, Peru, Bolivia, Paraguay and Argentina. Brazil and Venezuela have the largest specimens, but they are considered extinct in El Salvador and Uruguay.

The habitat of jaguars is relatively varied and depends mainly on the particular region where they are located. They can be found in rainforests, swamplands, grasslands, thorny scrubland and deciduous forests. In general, they mainly opt for lowland forests of the tropics, xerophilic ecosystems and pasture areas.

Leopards have a wide range of distribution, being found in various countries in Africa, the Middle East and Asia. They are considered extinct in Hong Kong, Jordan, Korea, Kuwait, Lebanon, Mauritania, Morocco, Singapore, Syrian Arab Republic, Tunisia, United Arab Emirates and Uzbekistan, where they once had abundant populations.

They have a greater variation of habitats than jaguars, being also found in desert and semi-desert areas. They can also be found in certain areas with prairie savannas, mountains and tropical forests, but there is even a small population in snowy regions of eastern Russia.

As for cheetah populations, they have also been strongly impacted and can be found in both western and southern Africa. In Asia, their distribution is limited to the central deserts of Iran. Although fragmented, they are present between northern Tanzania and southern Kenya. There are also records in southern Ethiopia, southern Sudan, northern Kenya and Uganda.

Cheetah habitat is made up of dry forests, thick scrub, grasslands and extreme deserts. They also live on plains, salt flats and rugged mountains. Find out more about the cheetah's habitat in our article on where cheetahs live.

Behavioral difference of the jaguar vs leopard vs cheetah

Jaguars can be active throughout practically the whole day, although they have a preference for activity at dusk and dawn. They seek refuge in the middle of the morning and afternoon, usually under thick vegetation, in caves or by large rocks. They are attracted to bodies of water and during flood season they stay in trees to rest. They are solitary animals, only meeting for mating purposes.

Leopards are solitary and nocturnal. This latter aspect increases if they are close to human areas. They are territorial, to the point that they mark the space they surround with with their urine and feces. They can emit various types of sound to communicate. They are excellent swimmers, preferring to spend most of their time in the lower canopy of forests.

The behavior of cheetahs is characterized by territoriality, an action they carry out by leaving traces of urine, feces, marks on trees and the ground. They even turn on the grass to flatten it and leave their scent. Cheetahs have a unique behavior among felids as they form social bonds or coalitions between related males. Eventually, they allow an external male to enter the group, although there are also cases of solitary males. Females are generally solitary or are accompanied by the young that still depend on them.

To know more about fascinating big cats, take a look at some hybrid creatures in this article on ligers and tigons.

Jaguar vs leopard vs cheetah - diet

All three are carnivorous animals. Jaguars are excellent hunters, using their powerful jaws to kill prey. They stealthily stalk their prey and, once they find the opportune moment, they pounce. They hold their neck to suffocate them, but they are also capable of piercing the skull with their strong canine teeth. Their diet is varied and they have a preference for large animals. They can feed on wild pigs, peccaries, tapirs, deer, alligators, snakes, porcupines, capybaras, birds, fish and others.

Leopards, meanwhile, ambush their prey and surprise them to prevent them from escaping. To do this, they move stealthily crouching and, once they are close, they pounce on the victim. When they capture their prey, they break the neck and suffocate them, later transferring it to a place where they can eat in peace, such as on top of a tree. Their strength allows them to hunt individuals larger than themselves. They eat antelopes, gazelles, deer, pigs, cattle, birds, monkeys, reptiles, rodents, arthropods and, sometimes, even carrion. They are also capable of hunting both hyenas and cheetahs. In addition, it has been identified that they store meat and continue to capture prey.

As for cheetahs, they are considered one of the fastest land mammals, an advantage they use for hunting. Unlike the previous big cat species, cheetahs do not stalk or ambush their prey. Instead, when they are at a distance of about 70 to 10 m, they start a fast sprint to capture it. However, they cannot maintain their speed for more than 500 m. When the hunt is successful, they knock the victim down with their forelegs and hold her by the neck to strangle her. Cheetahs are not as strong as the previous felines, so their prey is more limited and they usually flee if another predator with greater force contests them for food. Among the animals they consume are antelopes, gazelles, birds, hares and others.

Jaguar vs leopard vs cheetah - reproduction

Jaguars are capable of reproducing all year round, since females have heat cycles approximately every 37 days. These last between 6 to 17 days. However, between December and March mating is most frequent. When the female is in heat, she leaves her territory and makes sounds to communicate her disposition to the males. The latter will be able to fight each other in order to mate with the female. Once mating has occurred, females do not allow a male to approach, especially when a calf has been born. The pregnancy lasts between 91 to 111 days and a litter will have from 1 to 4 cubs.

In the case of leopards, both males and females can have multiple partners. Females have cycles every 46 days, and the heat lasts 7 days. During this time, they will be able to copulate up to 100 times a day. When a female is in heat, the male will be able to detect it by her urine that is loaded with pheromones or because she will be able to approach and brush the male with her tail. Pregnancy lasts 96 days and they usually give birth to 1 to 6 cubs.

Cheetahs also reproduce throughout the year and have promiscuous behavior. Both sexes will be able to copulate with various partners. Both males and females tend to move outside their territories during reproduction periods. Females are receptive for about 14 days in cycles ranging from 3 to 27 days. The gestation period lasts around 95 days and a litter will consist of a maximum of 6 cubs. Although, in captivity they can be more.

The jaguar is in the category of near threatened, the leopard and the cheetah are in a vulnerable state. In all cases there are various conservation measures that continue to be limited to achieve real protection of the species. To know more, take a look at our article on why snow leopards are endangered.

If you want to read similar articles to Differences Between a Jaguar Vs Cheetah Vs Leopard, we recommend you visit our Facts about the animal kingdom category.

Differences Between a Jaguar Vs Cheetah Vs Leopard 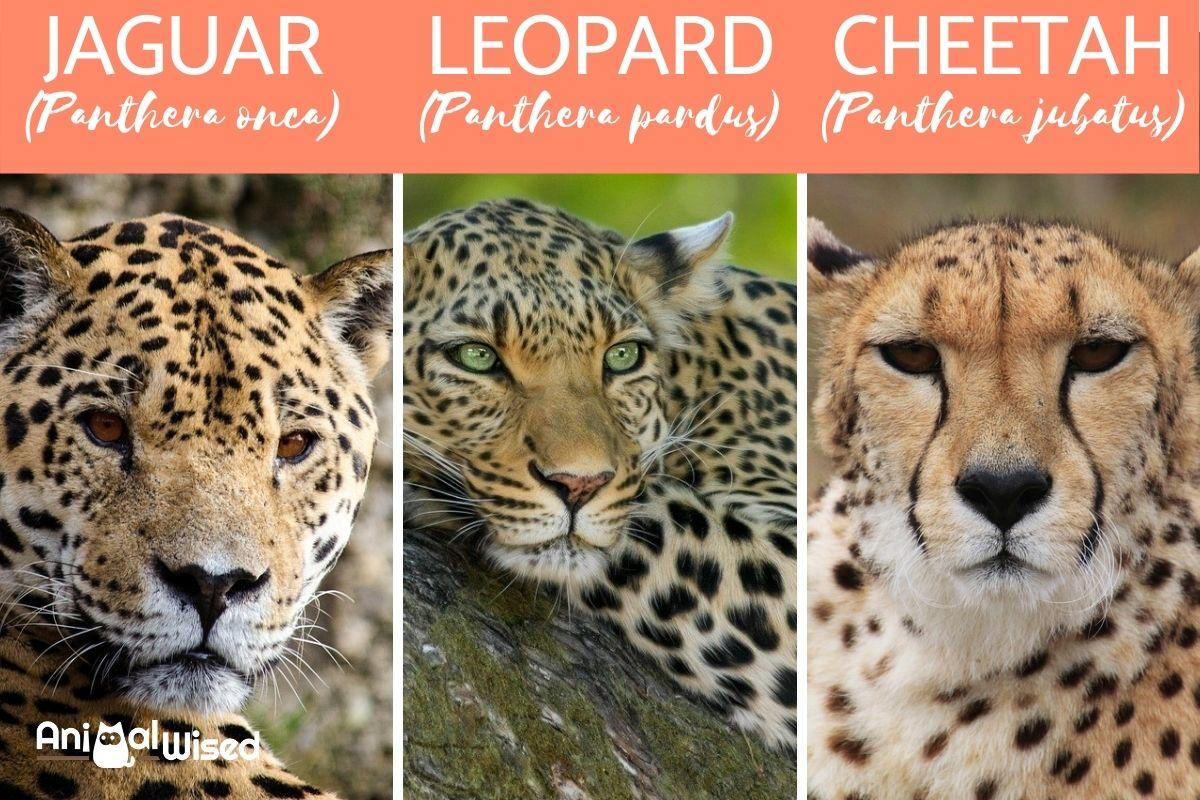 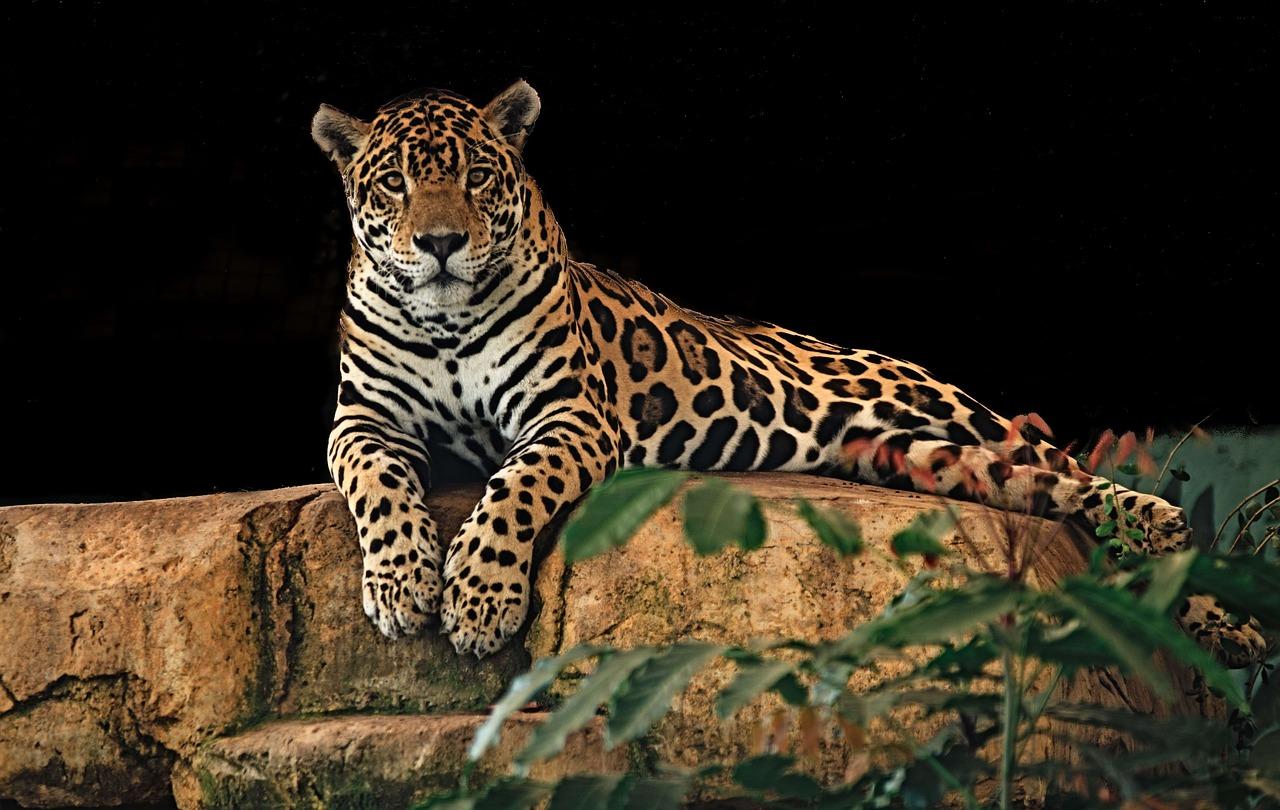 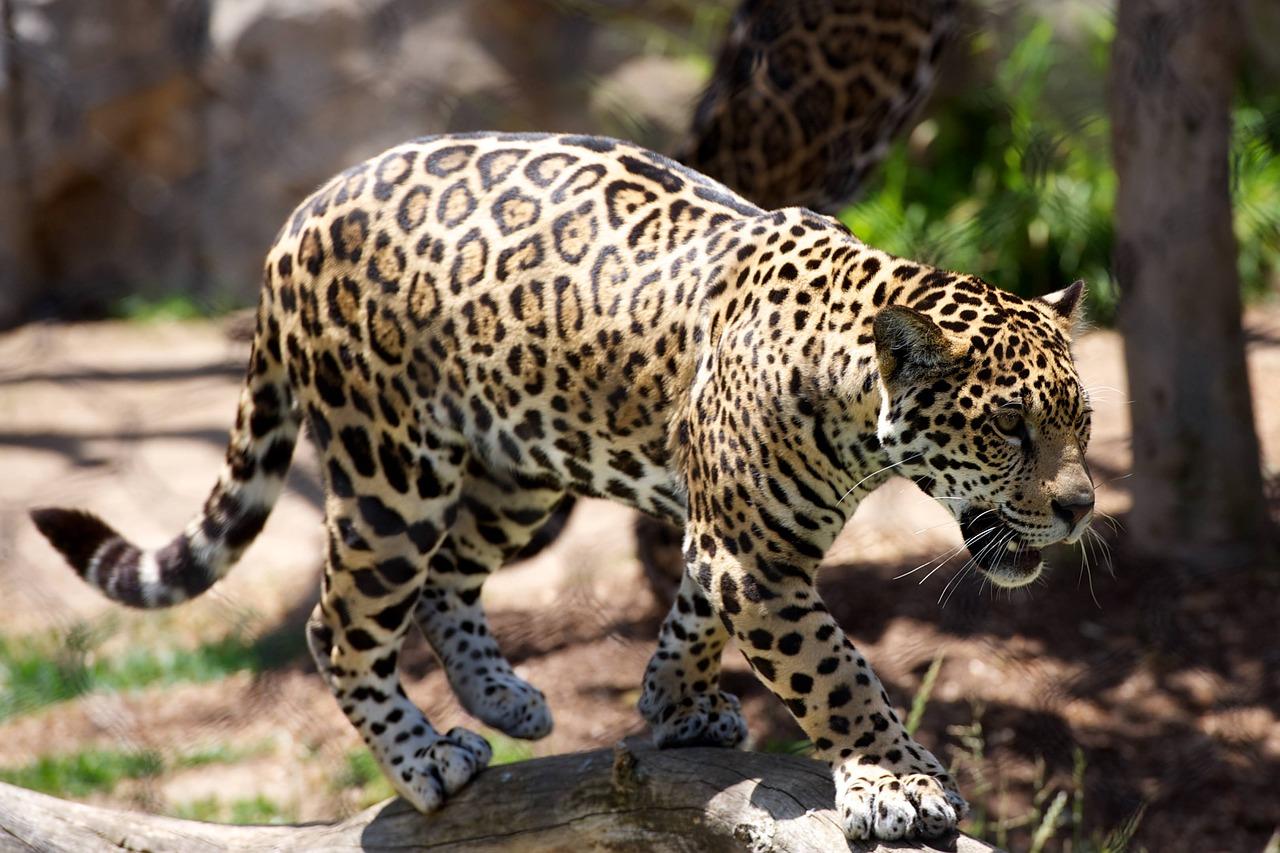 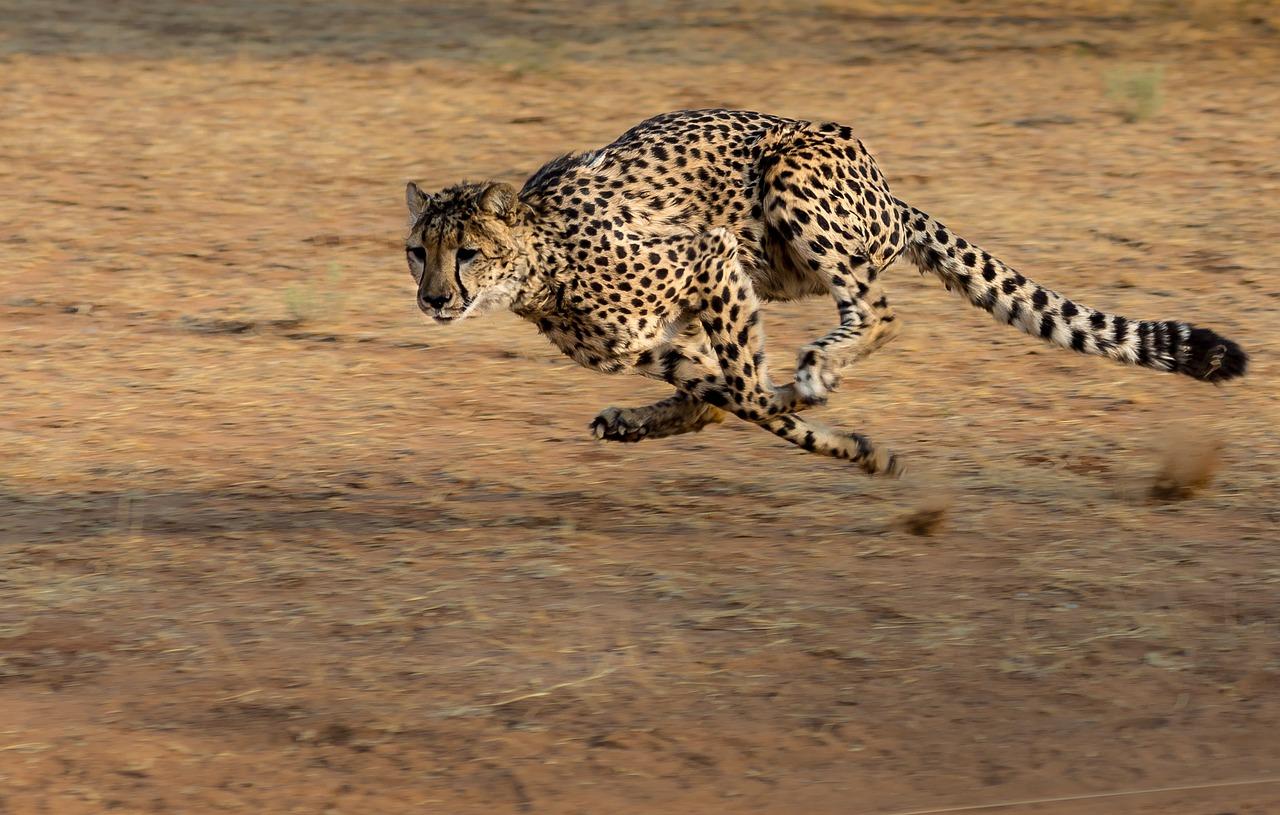 Image: Cheetah
1 of 4
Differences Between a Jaguar Vs Cheetah Vs Leopard
Back to top