How Many Legs Does a Spider Have?

By Nick A. Romero, Biologist and environmental educator. December 14, 2022

Spiders are a very extensive and diverse group of arthropods belonging to the class Arachnidae. There are more than 45,000 known species of spiders that occur in habitats around the world. Although all spiders are more or less venomous, only a few of them are dangerous to humans. They are known to be venomous, to build silk webs, and to gracefully climb all sorts of surfaces with their legs. But because they are such a heterogeneous and numerous group, they are also very diverse. Many people wonder how many legs spiders have and if all spiders have the same number.

In the following article from AnimalWised, you will learn all about spider legs, their number, structure, as well as some other important characteristics of these animals.

You may also be interested in: Eyes of Spiders - How Many Eyes Do Spiders Have?
Contents

Features of the legs of spiders

Many people mistakenly believe that spiders are insects. However, a spider is not an insect, but an arthropod. The term arthropod comes from the Greek words "arthron" (joint) and "pous" (foot) and means "jointed foot or leg." Spiders are characterized by these jointed appendages, which are used not only for locomotion, but also for weaving webs, holding their prey, and even for courtship.

The number of legs in arthropods can vary by group. Spiders have four pairs of legs, for a total of eight legs.

Continue reading this other article if you want to know how many eyes spiders have.

Characteristics of the legs of the spiders

Unlike insects, spiders have two body segments. The anterior segment is called the cephalothorax. This is where the eyes, fangs, stomach, brain, and glands that produce venom are located. The legs are also connected to this part. The second part of the body is called the abdomen. At the rear end of the abdomen are the spinnerets, the silk glands.

Spiders do not have a skeleton inside their body. They have a hard outer shell called exoskeleton. Because it is hard, it cannot grow with the spider. So young spiders must shed their skin or shed their exoskeleton.

Parts of a spider's legs

The legs of spiders consist of eight segments. Beginning with the end of the body, these are:

The legs of the spider are covered with many hairs. The hairs pick up vibrations and odors from the air. There are at least two small claws on the ends of the legs. Also, spiders have 48 knees, that is, six joints in each of the 8 legs. Another characteristic of spider legs is that they are not branched, but tubular and, as we have seen, multipartite.

How long is the leg of a spider?

As we have already mentioned, the legs not only provide the mobility of the spiders. The distal end of the claw plays a role in weaving the characteristic webs of these animals.

As mentioned earlier, the legs also have tactile receptors that provide them with information about the environment, such as moisture levels, the presence of prey, or predators. This is crucial because most spider species do not have good vision.

These tiny hairs also allow spiders to walk on any surface, even upside down. These tiny hairs create multiple points of contact between the spider and the surface, allowing it to easily hold on. In fact, a spider can hold twice its weight while upside down and not fall off. These hairs are small and flexible. This allows them to hold on tightly enough to not fall, while releasing quickly enough to catch their prey.

You may be interested in this other article, where we explain the anatomy of the spider body in more detail.

Do spider legs grow back?

Loss of legs is a common phenomenon in spiders, and depending on the species, 5 to 40% of adults may have at least one missing leg.

Spiders can regenerate their amputated legs as long as they have not been completely lost, that is, only a fragment has been severed. The process occurs slowly, and can only take place if the spider is still shedding its exoskeleton, since regeneration is only possible when the exoskeleton is detached. Because of the great diversity among these arachnids, it is not known whether all spiders have this regenerative ability.

Since spider legs serve so many functions, it would be logical that spiders who lose a leg would suffer. However, this is not always the case. Recent studies have shown that spiders that have lost one or two legs can survive more or less effortlessly. The webs of these spiders that are missing a leg are not very different from the webs of spiders with intact legs. They can also hunt efficiently enough.

It has also been noted that certain spiders have the ability to amputate a leg when they have suffered an injury, especially the young spiders. In contrast, older spiders are unlikely to sever a leg even though they are injured. This probably has to do with the regenerative ability of the animal, which is more effective in younger spiders. Moreover, regeneration has energetic costs that take away resources for survival, growth, and reproduction.

If you want to learn even more about spiders, do not miss the following article, where we talk about how spiders reproduce.

If you want to read similar articles to How Many Legs Does a Spider Have?, we recommend you visit our Facts about the animal kingdom category.

Bibliography
How Many Teeth Does a Cat Have?
How Many Fingers Do Cats Have?
How Many Stomachs Does a Cow Have and Why?
How Many Teeth Do Dogs Have?
Related categories
Endangered animals
Most read
1.
What Animal am I According to my Zodiac Sign?
2.
10 Most Beautiful Animals in the World
3.
What Does It Mean When a Cat Shows Up at My Door
4.
The 10 Most Solitary Animals in the World
5.
Top 10 Smells Dogs Hate
6.
How Many Types of Lions Are There?
7.
Why do Dogs Get Stuck when Mating?
8.
My Female Dog In Heat Won’t Accept A Male - Causes
How Do Spiders Reproduce?
How Many Kittens Can A Cat Have?
Anatomy of a Spider - Different Spider Body Parts
Are Camel Spiders Venomous?
How Many Teeth Do Sharks Have? - Types of Shark Teeth
Does Your Rabbit Have Memory?
How Many Species of Frogs Exist?
Are Wolf Spiders Venomous?

How Many Legs Does a Spider Have? 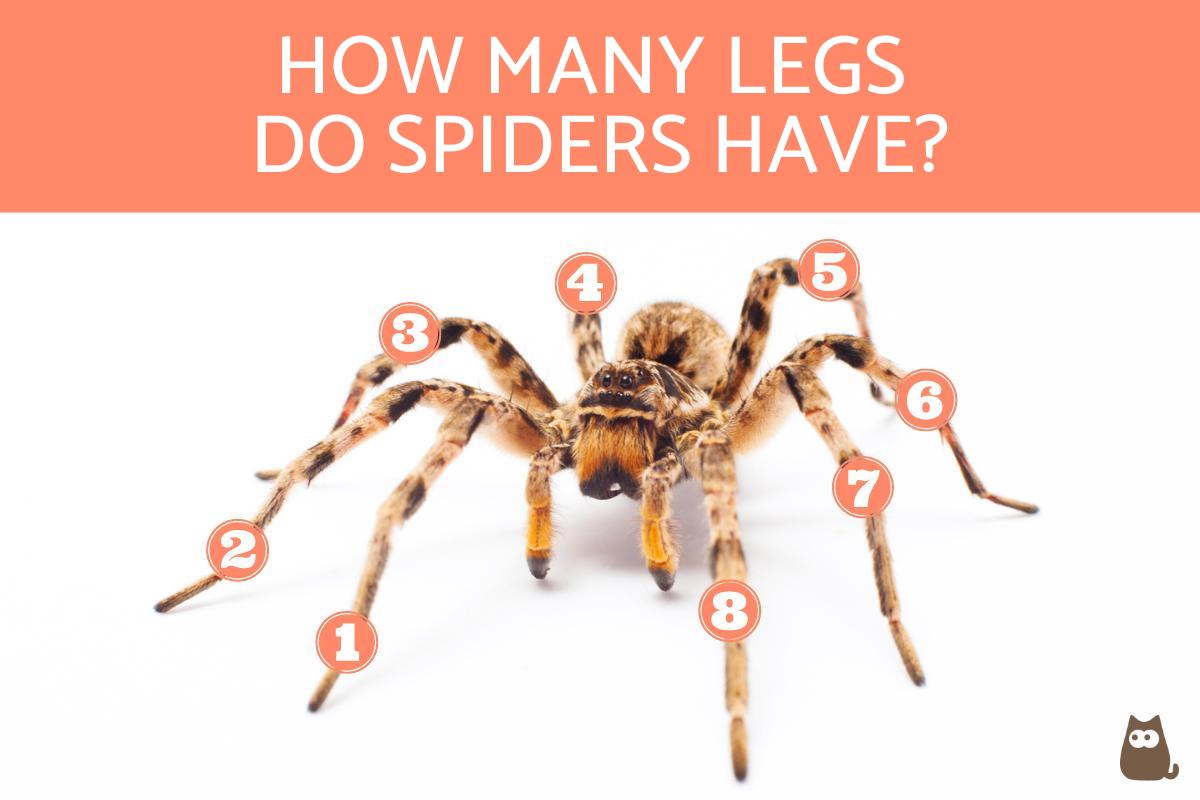 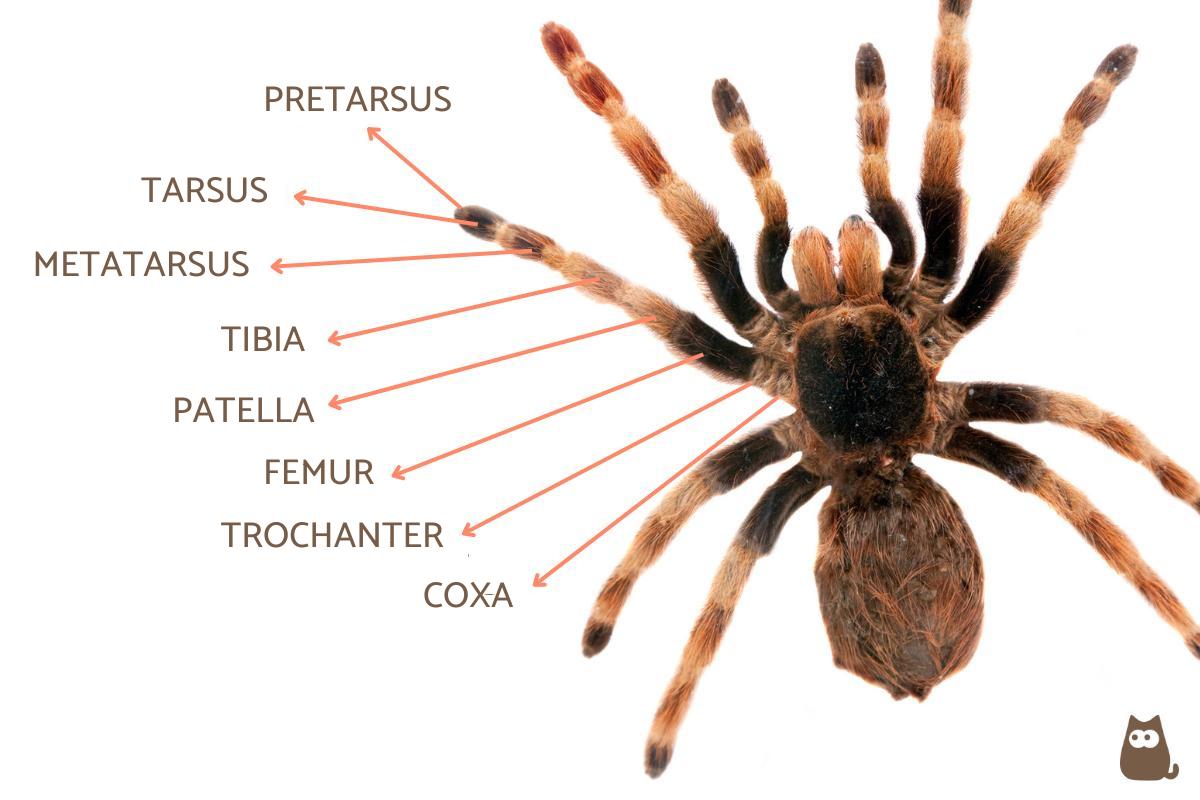 1 of 3
How Many Legs Does a Spider Have?
Back to top