My Cat Has a Swollen Nose 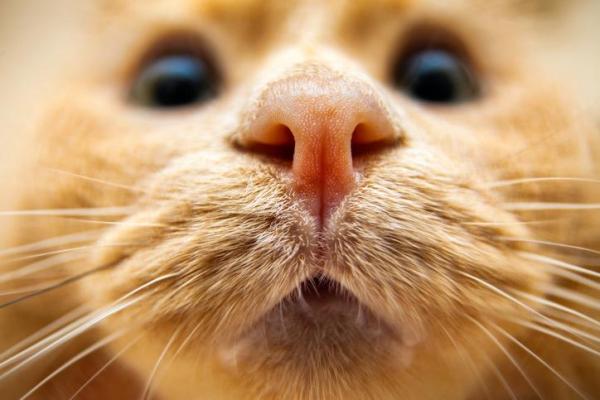 The cat is a born hunter with great agility to chase their prey. It is their acute sense of smell which helps them to track this prey in the first place. Their sense of smell is not only useful when hunting, but helps them to know as much as possible about their environment. With such usefulness, anything which might harm their sense of smell can jeopardize a cat's general well-being. Swelling or inflammation is one of the most obvious signs our cat has a problem.

At AnimalWised we look at what happens when your cat has a swollen nose. It is vital you recognize this symptom as abnormal and requiring immediate veterinary attention. If this is does not happen, the threat to their health could be much worse than losing the ability to smell.

You may also be interested in: My Cat Has a Wet Nose
Contents

As with any medical condition in a cat, we need to look at the context surrounding a cat having a swollen nose. This is especially the case when we don't know the origin of the problem. Looking at any other possible symptoms, we can better determine the underlying cause of the inflammation and help our veterinarian to decide on the best treatment option. These symptoms include:

While we may not be able to diagnose the problem ourselves, providing as much information as we can helps reach an accurate diagnosis as soon as possible. This means looking at behavioral changes as well as any physical symptoms which may occur.

A foreign body entering the cat's nasal passage is one of the most common reasons why their nose is swollen. Cats love to explore and smell anything. As is their reputation, a cat's curiosity can get them into trouble. They may push their face into or inhale something which causes them significant damage. The foreign object may be of varying sizes, but anything stuck in the sinuses is not good. Some of the most common objects which get lodged in a cat's nose include:

We may be first alerted to a dog's swollen nose by their sneezing, something which will likely happen when they have a foreign body stuck in their nose. There may also be mucus secretions which accompany the problem. We will need to look at the upper respiratory tract to see if anything is there. However, we should try to invasive which could cause further harm.

While it can happen to any cat, those with access to the outside are more prone to being bitten by insects, parasites or other bugs. This is because the outdoor environment is where many of these creatures live. Insects and arachnids which may bite or sting your cat's nose and cause swelling include:

Parasites such as ticks and fleas an also cause swelling on the cat's nose. They are not as likely here since they prefer other parts of the body. In these cases, in addition to the swelling, you will likely see the cat try to scratch their nose to relieve the itching sensation.

Similarly, contact with certain toxic plants for cats can result in inflammation. If the swelling is a reaction to a toxic substance it will likely be accompanied by redness, sneezing and scratching, among other symptoms.

Inflammation is one of the main symptoms of an allergic reaction in cats. The cat's nose and face are no exception. Depending on the type of allergy, the inflammation can spread to other areas. If the allergen is airborne, the nose and mouth may swell first when inhaled by the cat. This is similar to when the cat suffers a food allergy, since the allergens will come in contact with their mouth and face first.

Generally, all cat allergies will present the following symptoms:

While a swollen nose may not be severe, a large amount of allergen can cause a more acute reaction. In these cases, the cat may go into anaphylactic shock. This is a severe and rapidly evolving systemic allergic reaction. Symptoms of this reaction include:

The severity of swelling and other symptoms depends on exposure time and amount of allergens present. This is a veterinary emergency, so take the animal to a clinic ASAP if you recognize the symptoms.

When the cat has an abscess on their face, we can see considerable swelling. Said swelling is due to the accumulation of pus.It is common for this phenomenon to cause facial and nasal swelling in the cat. The abscess may have swelling under the skin, but a wound may appear when it breaks through the skin. The main reasons for an abscess include:

Treatment of abscesses in cats requires cleaning and disinfecting the wound site. In more severe cases, draining the abscess and using antibiotics may be required to treat the problem.

Feline cryptococcosis and a swollen nose

Cryptococcosis in cats is caused by the fungi Cryptococcus neoformans or Cryptococcus gatti. These fungi are present in soil, bird feces and some plants. They can be transmitted by inhalation. The result may be pulmonary granuloma, a structure formed by inflammation due to varying diseases. Immune cells known as macrophages try to cover the agent or pathogen (in this case a fungus) and wall it off to prevent harm.

Cryptococcosis also affects dogs, ferrets, horses and humans. The condition is most commonly asymptomatic, i.e. presenting no observable symptoms. In cases where clinical symptoms do appear, they usually manifest in nasal problems, problems affecting the nervous system, skin problems or other systemic reactions. Nasal symptoms are characterized by nasofacial inflammation, accompanied by ulcers and nodules in the region.

Another very common symptom is the swollen face of a cat is something known as ‘clown nose’. This is due to the characteristic nasal swelling and inflammation of the sinuses. Other symptoms include sneezing, nasal secretion and enlargement of the lymph nodes. It is very common for the cat to have a runny nose as well as to see bloody discharge, especially when sneezing.

To positively identify cryptococcosis in a cat, a biopsy and/or fungal culture is usually performed. The fungus may remain dormant for months or even years before symptoms appear, making it very difficult to determine its origin.

If your cat has cryptococcosis, you will want to know what treatment options are available. The treatment of fungal diseases can take a long time. The minimum is usually around 6 weeks and can take up to 5 months for successful treatment. The most commonly used medications to treat cryptococcosis are:

In these cases, it is important to protect the liver. Since medication is metabolized in the liver, it is possible we can see negative changes in this organ. Additionally, if there are secondary skin lesions and a wound in the cat's nose, a topical or systemic antibiotic treatment may be prescribed. Cleaning and disinfecting will be carried out by a veterinary medical professional.

You should never medicate your cat yourself. This can cause other adverse reactions, resulting in exacerbating symptoms and potentially even the death of the animal. Vestibular syndrome is one such complication.

Feline AIDS virus (FiV), feline leukemia (FeLV), herpes virus or calicivirus can also cause inflammation of the nose. These may also be accompanied by sneezing and even wounds and scabs on the cat's nose. Each disease will also have other specific symptoms relating to it. A viral sinus infection such as rhinitis can also lead to swelling of the nose.

Treatment of a virus will generally involve managing the symptoms of the condition. Antiviral drugs may be available, but it will depend on the specific disease and the clinical picture of the individual cat. Similarly, it is very important to ensure the cat's vaccination schedule is up to date to prevent contracting a virus in the first place.

Other causes of a swollen cat nose

Although the above are the most common causes of a cat's swollen nose, they are not the only possibilities. Here are some other causes which could lead to an inflamed nose:

The nasolacrimal duct is a small structure that connects the lacrimal gland (where tears are produced) and the nasal cavity. It can become blocked, as can the paranasal sinuses. These blockages may be due to build up of secretions, foreign bodies or bacteria.

Respiratory disorders, whether acute or chronic can affect the nasal cavity and nasopharynx. Rhinitis (a type of sinus infection) and asthma are some of the most common. If you notice any respiratory symptoms such as sneezing, nasal or ocular discharge, coughing or difficulty breathing, you should take your cat to the veterinary center before symptoms worsen.

Neoplasia or nasal polyps are growths of the mucus membrane in the sinuses. By direct or indirect obstruction of the respiratory structures, the cat may also have the above symptoms.

Sporotrichosis in cats is a fungal disease and, generally, the treatment is an antifungal such as itraconazole. It is a zoonosis, meaning it can be passed on to humans. The pathogens can enter the animal through open wounds, animal bites or scratches, most commonly affecting the mouth and nose.

If you want to read similar articles to My Cat Has a Swollen Nose, we recommend you visit our Other health problems category.

My Cat Has a Swollen Nose 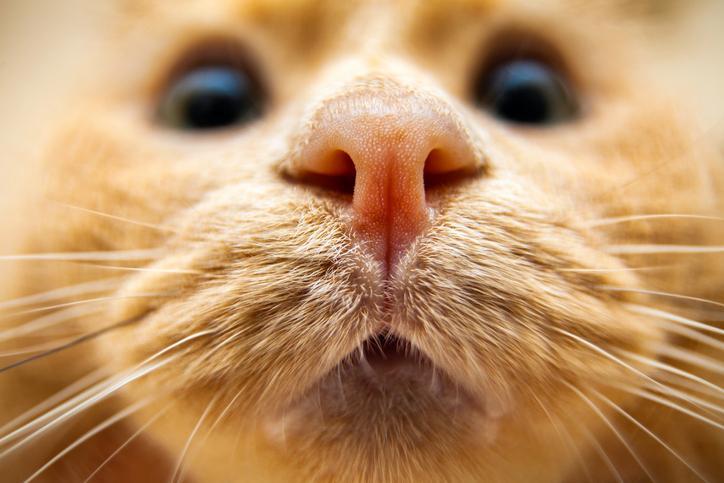 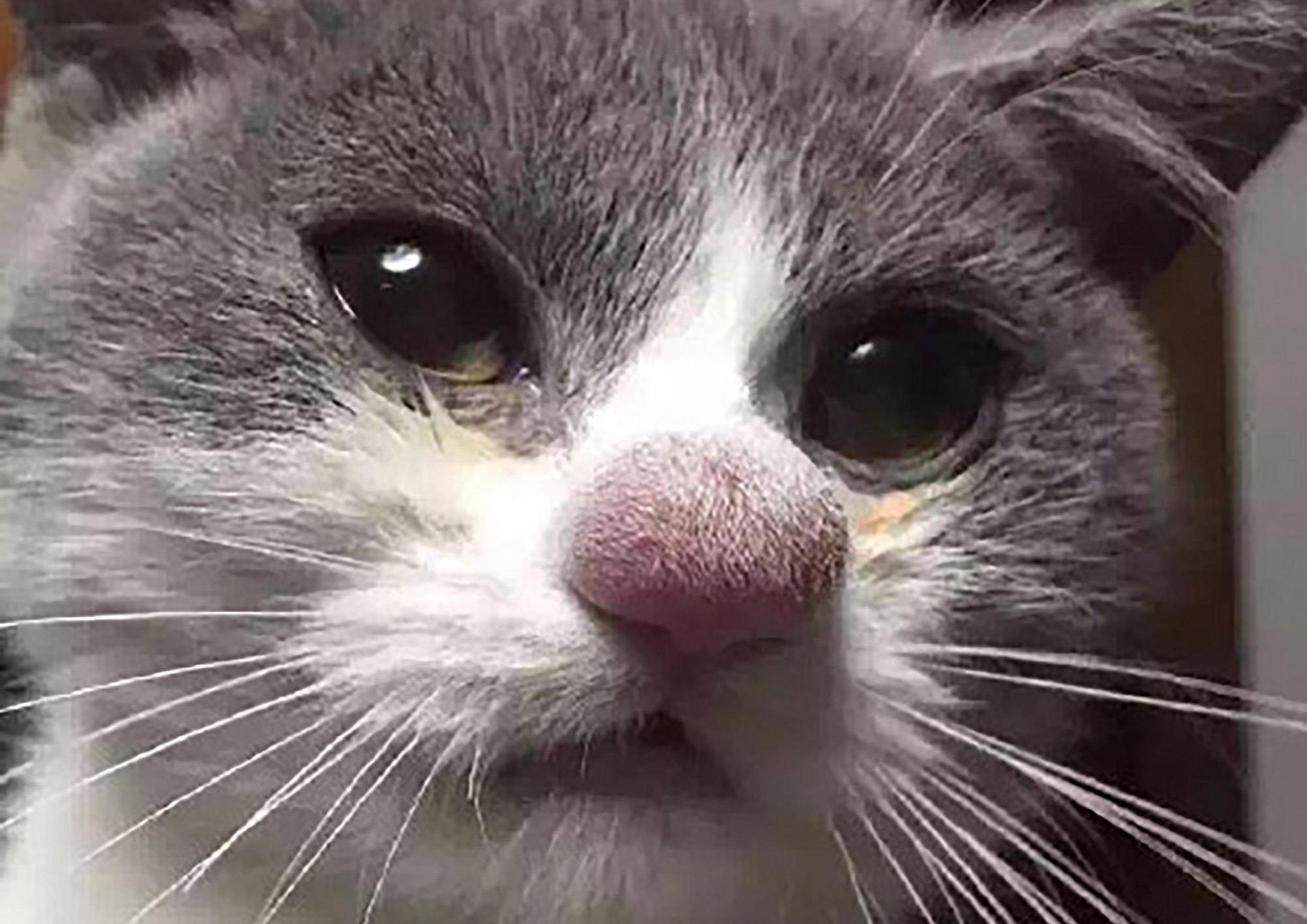 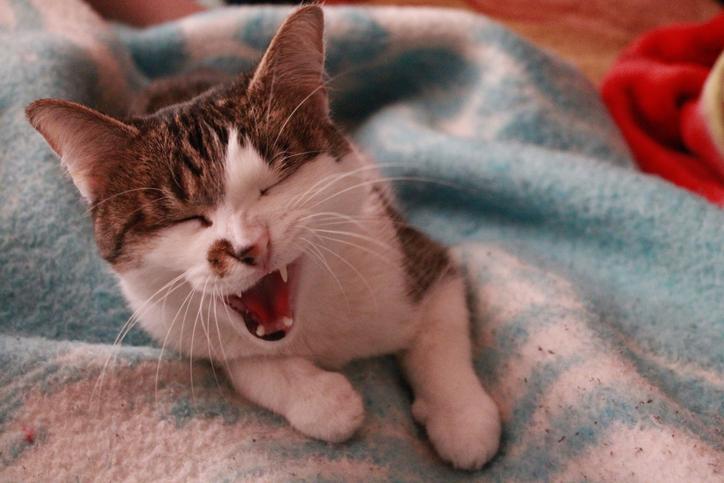 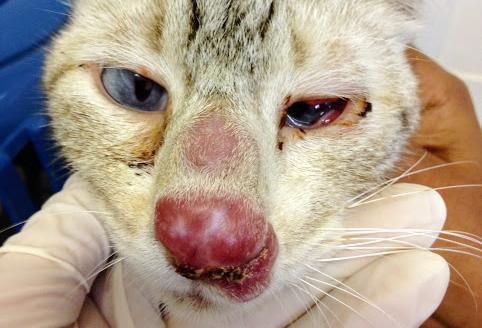 Image: rio.rj.gov.br
1 of 4
My Cat Has a Swollen Nose
Back to top