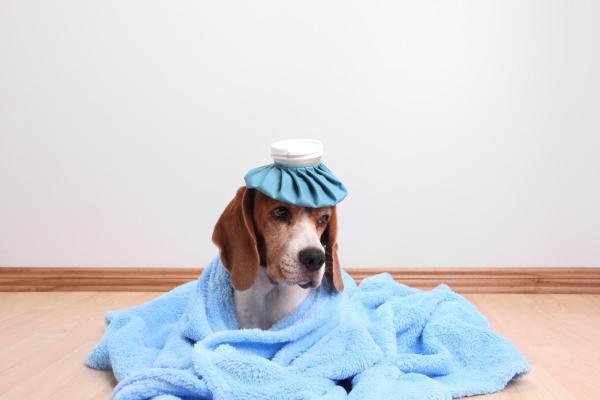 Even the healthiest dog can make odd noises from time to time. The reasons vary according to where the sound emanates, such as the stomach, rear or mouth. If we hear a gulping noise, it could simply be they are trying to swallow something. When they repeat this gulping noise regularly, it is possible they have trouble swallowing. Trouble swallowing could be due to eating something too large, but there are also health conditions which can have this as a symptom.

At AnimalWised, we investigate why my dog keeps making a gulping sound. We do this by providing 8 of the most common reasons dogs have trouble swallowing.

You may also be interested in: My Rabbit's Stomach is Making Gurgling Sounds
Contents

Rhinitis is a nasal inflammation that can spread to the sinuses. When this occurs, it is known as sinusitis. The clinical signs that cause both diseases are sneezing, thick nasal discharge with a bad smell and nausea due to the postnasal drip that occurs. This is the discharge that passes from the nose to the mouth, causing the dog to keep gulping as they are constantly swallowing mucus.

There are several infections that can trigger rhinitis and sinusitis, including viruses, bacteria, fungi or, especially in older specimens, tumors. Dental problems such as tooth abscesses can also be the underlying cause. Symptoms such as those described should make us go to the vet, since it is necessary to prescribe a treatment. This could be in the form of antibiotics or managing the symptoms until the infection passes.

Dogs use their mouth to investigate their environment, often resulting in them swallowing foreign objects. Objects such as bone fragments, splinters, toys, long material or almost anything can become stuck in the dog's throat. If the dog isn't gulping to try to swallow the object, they may be seen with a dry cough trying to gag. We can suspect the presence of a foreign body if the dog also hypersalivates, seems to choke, cannot close their mouth or tries to touch their mouth with their paws.

It is important we take the dog to a veterinarian when a foreign body is lodged in our dog's throat. They will be able to run tests to pinpoint the location and size of the object. After this point they can determine how to remove it correctly. If we try to do the same, we run the risk of causing internal injuries to the dog which can be fatal.

This is due to the inflammation of the throat, usually affecting both the pharynx and the tonsils. The dog is seen trying to gulp due to the enlarged tissues and they are often associated with oral or respiratory infections. In these cases we will notice that the dog pretends to constantly swallow saliva, has a cough and has fever. They also lose their appetite since it hurts to swallow.

Such a clinical picture is reason for veterinary consultation. The professional who must determine the cause of the inflammation and based on it, guide the most appropriate treatment. Once treated, the dog should regain their appetite and be able to eat again.

Another inflammatory disease, esophagitis refers to inflammation of the esophagus. This can be due to various causes. We will notice that the dog pretends to constantly swallow saliva, they are in pain and they can be seen regurgitating. When this condition becomes chronic, the dog loses their appetite and consequently ends up losing weight. In any case, it is a problem that the veterinarian has to treat to establish the cause and its subsequent treatment.

We may notice our dog tries to constantly swallow saliva and is restless just before vomiting. Nausea or retching is followed by visible contractions in the abdominal area and finally, a relaxation in the lower part of the esophagus occurs. This is what allows the stomach contents to be expelled through the mouth in the form of vomit. Not all episodes of nausea end like this as some may only cause retching or a feeling of unease in the dog.

Dogs can vomit easily, so it can happen in many cases without being a distinct threat to the dog's well-being. For example, dogs often eat grass to make themselves vomit for various reasons.

Vomiting itself is not a disease, but it can be a symptom of many different pathologies. Some of these may be minor, as is the case with mild gastrointestinal upset. However, vomiting (especially when coupled with diarrhea) can also be due to serious issues such as parvovirus, kidney disease and gastric torsion.

For these reasons, it is very important we look at the other symptoms. If they become critical, the dog can start to slow their breathing, pass out and may eventually die. With minor symptoms, the issue might pass, but it is important to take the dog to a veterinarian right away to properly diagnose the problem.

Brachycephalic dog breeds are those that are characterized by having a wide skull and a short snout. Common examples include the Pug and the English Bulldog. Due to this compromised morphology, they can develop various health problems, especially those related to respiration. This is why these dogs often make strange sounds such as when the Pug keeps making a honking noise.

Brachycephalic dog syndrome is when several deformities such as narrowing of the nostrils, elongation of the soft palate or the eversion of the pharyngeal ventricles occur at the same time. In these cases, we can notice that the dog keeps gulping because their airways are obstructed. In addition to gulping, they may make snorting, gurgling and sneezing noises. If the animal is at risk of asphyxiation, surgical intervention may be required.

Kennel cough is a well-known canine disease, so-called because it is very contagious and can spread through dog kennels quickly. It is as a result of various pathogens which can occur alone or in combination. The most characteristic symptom is a dry cough. However, it is also common to see the dog try to swallow and gulp a lot.

Kennel cough is usually mild, but there are cases that are complicated by pneumonia. This can lead be seen to cause fever, anorexia, runny nose, sneezing and/or breathing difficulties. Puppies can get seriously sick, another reason why it is best to go to a veterinarian.

In chronic bronchitis the dog will have a persistent cough for months. The cause is not clear, but it is known that inflammation occurs in the bronchi of the lungs. The cough will appear in fits, for example when the animal becomes very nervous or exercises. When coughing, we can also notice that the dog is gulping, since the cough can cause retching and expectorations. It shouldn't cause vomiting. It is another disease that the veterinarian has to treat to avoid complicating it and causing irreversible injuries.

A raise in the dog's normal body temperature can indicate illness. In the video below, we show you how to take a dog's temperature to find this out.

If you want to read similar articles to My Dog Keeps Making a Gulping Sound, we recommend you visit our Other health problems category.

My Cat Keeps Making Choking Noises
My Dog Keeps Farting
My Dog has a Swollen Throat
My Cat Keeps Peeing on My Clothes
Related categories
De-wormingParasitic diseasesIntestinal problemsEye problemsHome RemediesBreathing diseases
Most read
1.
Can I Bathe My Dog After Vaccination?
2.
My Dog Is Bleeding from His Penis
3.
My Dog's Poop Starts Solid Then Goes Soft
4.
What to Do if My Dog has Something Stuck in his Throat?
5.
My Cat Has Liquid Coming From Their Anus
6.
Myiasis In Dogs - Symptoms, Removal And Treatment
7.
My Dog Has Pus Coming From His Penis
8.
Why Does my Dog Have Swollen Breasts?
My Dog Keeps Licking Her Private Area - All Possible Reasons
My Puppy Keeps Scratching and Itching
My Cat Keeps Gagging - Causes & Treatment
My Dog Is Making Weird Mouth Movements
My Dog Keeps Sticking Their Tongue Out
Why Does My Dog Keep Licking their Paws?
My Dog Keeps Sneezing - Why and What to Do
My Cat Keeps Scratching Their Ears 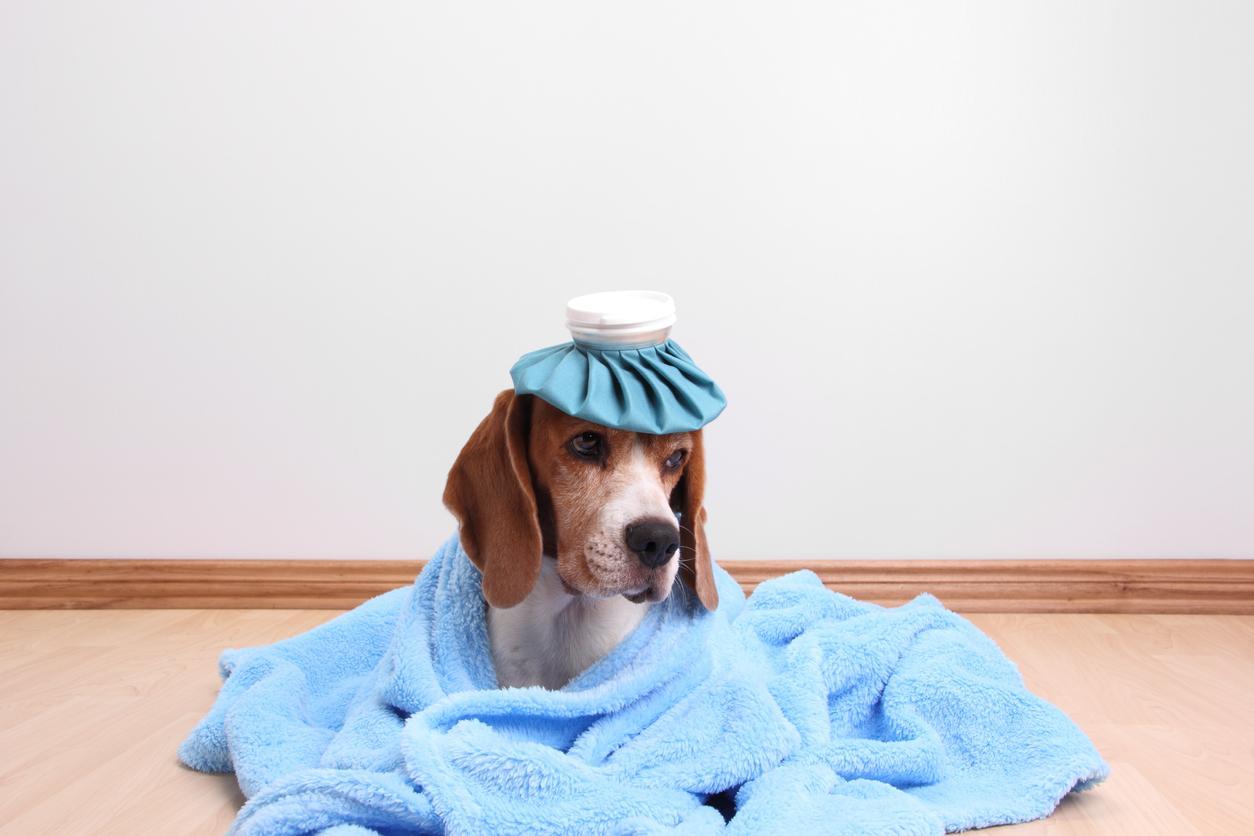 My Dog Keeps Making a Gulping Sound
Back to top