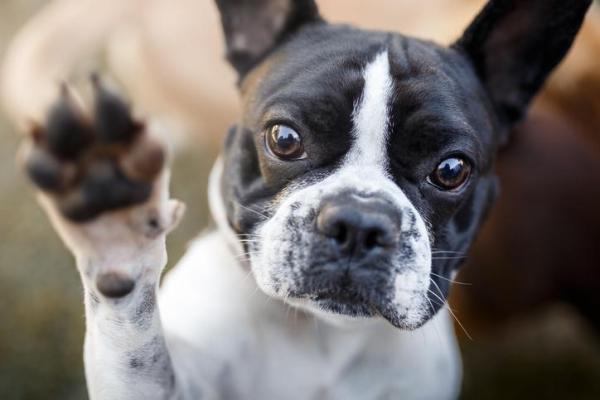 There's a reason why dogs don't normally wear shoes. The soles of their feet are durable enough for them to walk across different terrain. If we were to go out in the snow without shoes, we wouldn't last very long. Huskies somehow manage to trek across snowy terrain on their paws alone. And yet, a dog's paw pads can be very sensitive. Sometimes you are cuddling with your furry pal and you reach out to touch their paws, but they will have none of it. Some dogs might generally have sensitive paws, but others are being sensitive because there is an underyling problem.

AnimalWised looks into some of the reasons for sensitive dog paws and helps you to treat any pain and swelling which might be present. We'll also help your dog feel more comfortable with touching their paws in general so you can care for them more easily.

You may also be interested in: Do Dogs Have a Dominant Paw?
Contents

Why won't my dog let me touch his paws?

There are different parts of a dog's body which are sensitive, but this will depend on the individual to some degree. With their paws, there are various reasons these are more sensitive. The first is that there is a concentration of nerve endings on the pads of a dog's paws. Touching this region can generate an exaggerated response in your dog's nervous system. This might be similar to when someone tickles the soles of our feet. It's not that our feet aren’t robust, but the high concentration of nerve endings makes them ticklish when touched.

We also need to remember many of the demonstrations of affection employed by humans are not necessarily understood as such by dogs. Dogs are not naturally inclined toward certain human behaviors such as kissing or hugging. Neither is it likely to see two dogs shaking paws when they greet each other. It would be as strange for us to see this behavior as it would be to see two human strangers sniffing each other's behind rather than saying ‘hello’. Touching each other's paws is not a natural part of canine body language, making it understandable why many dogs do not like to be touched there.

However, there are different levels of discomfort. While a dog may not like to be touched on their paw pads, this doesn't necessarily mean they should get aggravated. If you try to touch a dog's paw, they might react with a flinch. Sometimes they may even growl at you, especially if you have tried to do so repeatedly. In some cases, they may even try to bite you. These reactions are more acute than usual, so you need to look out for other symptoms. They may react because they feel itching, pain or even have a wound on their paw pad.

Is your dog in pain?

If your dog is reacting very negatively to touching their paw, then you need to look out to see if a physical injury is present. If you see one, then you should apply some canine first aid and ensure any wounds are kept clean. More serious injuries or deep wounds should be treated by a vet, especially if there is reason to believe it is infected. If the wound is infected, then you will likely see inflammation, but it could also be accompanied by pus. The vert will need to treat this infection, most likely with antibiotics in serious cases.

Dogs are very resilient, so it will not always be evident that they are in pain. You may see them licking their paw pads repeatedly. If this is the case, then they may be trying to mitigate their pain. If your dog reacts viscerally when you touch their paws, it is likely they are in pain. They might give a yelp or some other vocal sound to show their pain. If this is the case, their paw might be broken, infected or have sustained some other sort of injury. Take them to the vet to manage the pain and treat the problem.

Most dogs will have a high tolerance to cold ground and snow, even though they have sensitive paws. However, temperature is not the only thing a dog's paws need to be protected from. When it snows, many communities put salt on the ground to stop ice forming. This can seriously dry out your dog's paws and result in dry, cracked or lacerated skin.

A dog might not reject being touched on their paw simply because it is sensitive or because they have an injury. It may also be associated with other trauma. A dog which has experienced negative situations in the past, such as physical and/or mental abuse, might associate having their paws touched with such abuse. In these cases, it is most likely that their reactions to being touched on the paw is exaggerated. They may try to escape, they may urinate out of fear or they might become aggressive.

If you have recently adopted a new dog into the family, it is advised you find out as much information you can about their past. The shelter or family from which you collected them should be able to tell you what they know. Also, if you see regular symptoms of phobias, stereotypies or other behavioral problems, you may want to take them to the vet or a canine ethologist to see how you to help the dog have a happier life.

If you think your dog's paw or leg might be in pain, take a look at this article on signs of pain in dogs to watch out for other symptoms.

Not necessarily. As with humans, some dogs will have different tolerances and thresholds of sensitivity. This doesn't just mean when touching their paws. Some dogs love a hefty scratch at the back of their ears, others won't want to be touched there at all. Dogs with particularly sensitive paws may be otherwise healthy, mentally or physically. It might be similar to how some people describe themselves as ‘ticklish’. The dog will show their discomfort in variety of ways, but it is often quite subtle. They may simply try to move their paw away, but otherwise remain calm. Others may become more defensive or have a more visceral reaction.

If your dog hates being touched on the paw and they react very negatively, then it will make some general health maintenance difficult. The most common problem is when you have to trim your dog's claws. They might be so sensitive that they cannot stand the clippers at all. If your dog has claws which grow too long, it can lead to health problems, so you will need to take them to the vet to resolve the issue. Remember to keep an eye out for other health symptoms and maintain their general well-being.

Each dog is an individual with a unique personality. It is even possible for some dogs to enjoy receiving pets or touches to their paws. Their legs may not be as sensitive or they may have had pleasant experiences during their early socialization period. As an adult dog, being comfortable with having their legs and paws touched is very beneficial. Not only does it make their practical care easier, but it implies they are a dog with a stable and balanced personality.

Remember that our dog will always have their legs on the ground. It is possible they will come in contact with dirt, pathogens or sharp objects which can result in lacerations or punctures. We also need to be careful with the potential for ticks, fleas and other ectoparasites. They can travel up the legs from the paws and hide easily.

For all of these reason and more, it is important to accustom your dog to being touched on their paws. Ideally, we should start this process in the first months of life. It is something which should always be done with the greatest amount of care and respect. With patience, dedication and the use of positive reinforcement, you will see that your dog will gradually learn to accept you touching their legs and paws.

Why does my dog cover his face with his paws?

Do you ever wonder why your dog covers their face with their paws? Among the many curious things dogs do, the habit of putting their paws over their snout or face might be a concern. It can look as if they are hiding or are in a state of discomfort.

There is no single explanation for this particular behavior. The reason behind putting their paws over their face will depend on the personality and well-being of the individual dog. The context in which this behavior occurs is also important. Paying attention to their general body language will help us understand why our dog does this.

Below, we summarize the main causes to help you understand why a dog puts their paws over their face:

If you want to read similar articles to Sensitive Dog Paws - Causes and Treatment, we recommend you visit our Facts about the animal kingdom category.

What Does It Mean When a Cat Lets You Touch Its Paws?
My Cat Drinks Water With Their Paw
What Causes Albino Animals?
My Dog Doesn't Like His Tail Touched
Related categories
Endangered animals
Most read
1.
What Animal am I According to my Zodiac Sign?
2.
Are There Venomous Spiders in the UK?
3.
What Does It Mean When a Cat Shows Up at My Door
4.
The 10 Most Solitary Animals in the World
5.
10 Most Beautiful Animals in the World
6.
10 Smells that Attract Cats
7.
Most Common Cat Eye Color and Their Meaning
8.
My Female Dog In Heat Won’t Accept A Male - Causes
What are Cat Whiskers For? - Feline Senses and Communication
Dog Sleeping Positions And What They Mean
Do Cats Like Hugs and Kisses?
What Sounds Do Cats Hate?
Why Is My Dog Whining - Causes
Can Dogs Detect COVID-19?
New
My Dog Howls at Sirens - Why and What to Do
Why Do Flies Rub Their Legs Together 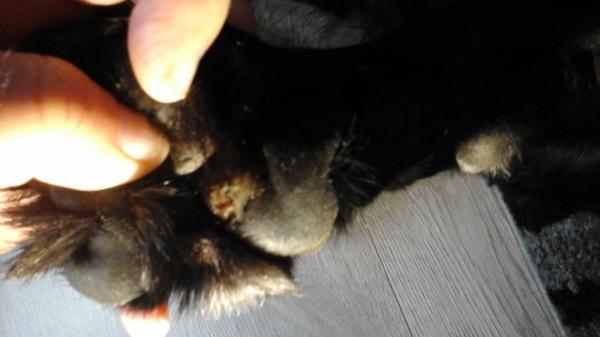 I am looking for something to toughen the space in between a labs pads. They are being attached and causing him misery. He is being treated for allergies but this doesn't seem to have helped his paws and they are often very red and angry. This happens no mater what the season. He is on Dermdefence food as well. Any advice?

Administrador AnimalWised
18/07/2019
Hi Kevin
There are some remedies you can use to tread dog paw pad injuries, read https://www.animalwised.com/how-to-treat-a-dog-s-paw-pad-injury-2612.html#anchor_4
Sensitive Dog Paws - Causes and Treatment 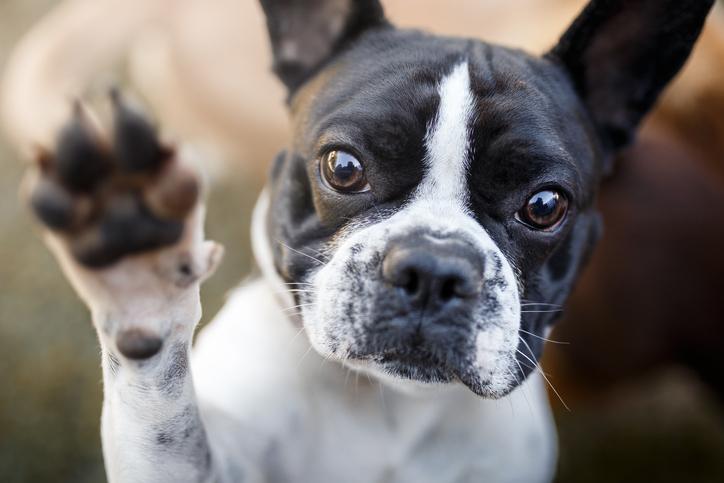 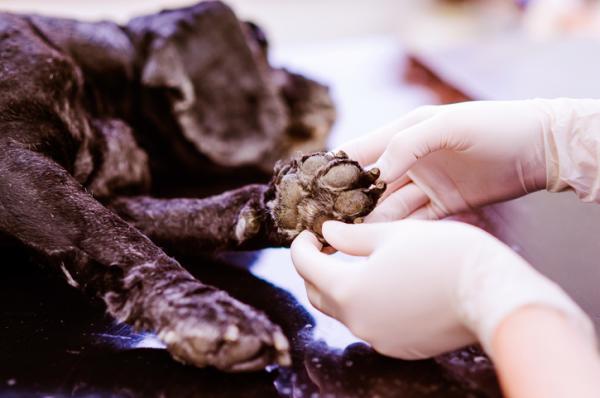 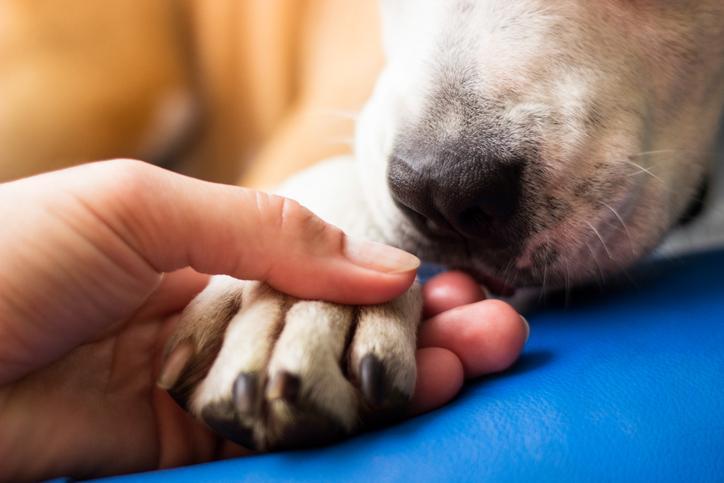 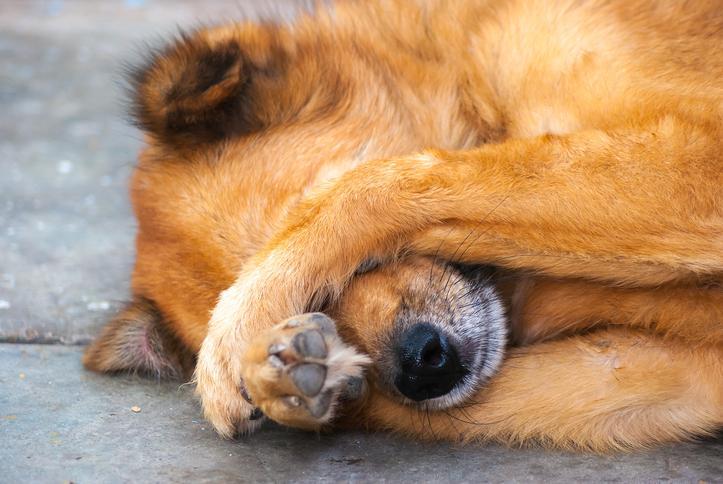