15 Breeds of Dog That No Longer Exist

There are many reasons animals go extinct. They tend to come under the general groupings of those caused by human interference, loss of habitat, rivalry with other animals in the same ecosystem or even natural selection. Of course, there are many other reasons we do not have the resources to, at least as of yet, understand. Whatever the reason for extinction, it is always a sad time for the planet.

When we discuss animal extinction or endangered animals, our minds usually go straight to large animals. They may include a rare rhinoceros, big predator cats, bird species endemic to lost islands or, of course, the dinosaur. However, some species of dog have also been lost through time. Often their bloodlines continue through new breeds, but this list of 15 dog breeds that no longer exist from AnimalWised shows us the canines which shall unfortunately never be again.

You may also be interested in: Extinct Species of Cat
Contents

Considered the godfather of large dog breeds in Germany, the Bullenbeisser existed in Syria and other regions of Asia and Africa around 2000 years before 1 AD. For this reason it is also considered one of the oldest dog breeds. According to records, they were of a strong and solid build, used for hunting animals, herding and as a battle companion.

According to existing records, the Hare Indian Dog resembled a mix between the domestic dog and a domesticated coyote. It was raised in the Hare Indian Tribe, a Native American tribe located in what is now part of Canada. It was said to have had a playful personality and that it socialized very well with strangers. However, this didn't prevent it from being fast, agile and a great hunter. As a faithful companion to the Native Americans, it began to disappear along with the tribe from which it gets its name, due in part to cross breeding with other types of dog.

Originally from Cordoba in Argentina, this breed was the result of cross breeding between several other dogs including the Mastiff and the English Bulldog. Their body was usually white or sometimes with brown spots. With a massive, large and energetic body, they were known to be extremely violent with other dogs, other animals and even with dogs from their own pack. It was this violence which lead to its early extinction. When it was not used in dog fights, they often fought each other to the death with minimal provocation. As fighting was bred into them by humans, it is difficult to determine their true nature against this malign influence.

As was typical in France, the Braque de Puy (sometimes known as the Dupuy Pointer) was characterized by its white coat with orange spots. It was a graceful dog with thin yet agile legs and was used by humans for hunting. The disappearance of this pointer occurred at the end of the 20th Century when breeding with other dogs reduced the original characteristics to the point they essentially disappeared.

New specimens closely related to this Dupuy Pointer do exist and there are some unsubstantiated claims that they may still exist in remote parts of Europe. There are some who claim that until only a few years ago, a female survived in the Canary Islands. Since there were no thoroughbreds to mate with her, she was essentially the last of the species.

Related to other Polynesian breeds, studies indicate that the Poi dog arrived in Hawaii with the first Polynesian settlers around 400 AD. There, a variety was developed which moved away from its ancestors, eventually forming its own characteristics to distinguish them.

Small-bodied, the Hawaiian Poi Dog was popular with local families as it was believed to protect the homestead. Gradually, it was also incorporated as part of the local diet. Despite an attempt to revive the breed in the 1960s, it was this along with crossbreeding that lead to its disappearance in the 20th century.

The Argentine Polar Dog was bred in Argentina for a very specific purpose: to be used to pull the sleds of a military base that the Argentine Army wanted to open in the cold tundra of Antarctica. A working dog, it was the cross between a Siberian husky and 3 other equally strong, hardy and fortitudinous breeds. By 1994, it was considered extinct although the reasons why are still unclear. A dispute began between institutions as some considered the presence of the dog to have a negative impact on the local ecosystem. They were eventually removed from the area, but some believed such an impact did not exist. No longer being needed for this specific purpose, it is thought the breed was then bred with others until finally lost and now extinct.

Created in the Paisley and Clydebank regions of Scotland, it was a small breed with a long coat. Sometimes considered a dog fancier's pet, it became popular as both a companion and show dog. Winner of contests and marketed as a lap dog for wealthy housewives, their fame began to decline due to the difficulty of caring for its delicate coat.

Several crosses modified the breed until it eventually disappeared. Its legacy, however, still exists in other breeds such as the popular Yorkshire Terrier.

Originating in Mexico, the Techichi is considered to be the pre-Columbrian ancestor of the Chihuahua as it was a dog bred by the Toltec civilization. Although there are few extant records to provide data on its characteristics, some remains have revealed the existence of the breed. Apparently, it was not only a companion animal, but there was also certain religious symbolism surrounding the animal. Wall drawings and evidence of their remains accompanying the dead have been found to support this theory.

The reason for its disappearance is not entirely clear, although the research has suggested two determining factors: that the Spanish developed a taste for the meat for the Techichi and that they were breed with other breeds to the point of extinction. One such breeding dog was believed to be the Chinese Crested Dog.

Raised in Great Britain during the Middle Ages, it eventually spread its influence across much of Europe. According to records, they had a great sense of smell, a strong body and was of medium height. It was perhaps used for hunting in some areas, but it is hard to confirm.

Little is known about their disappearance, but it seems they may have been bred out as they didn't seem to serve a specific purpose. It is considered the ancestor of the Beagle and its memory resides in the many British pubs which still bear its likeness on their signs.

Disappearing at the end of the 19th Century, these Mastiffs inhabited the mountainous areas of the Alps. It was a dog of the so-called Molosser category meaning it was large with strong lengths and an impressive musculature. They are considered ancestors of the current St. Bernard breed.

In 1829 they were taken to England where they mixed with other breeds. Additionally, this breed crossed indiscriminately with other dogs of the region which is believed to have contributed to its disappearance.

Very little data exists on this particular breed, perhaps in part due to its relatively short existence. White in color and fragile of health, it is believed one of the first specimens of this breed belonged to one Alfred Benjamin who showed the dog successfully in competition.

From then on some breeders tried to establish the English White Terrier as a new breed and promoted its reproduction. However, the dogs were of such a weak build that they were unsuitable for work. Even as a companion dog, they maintenance required such effort that they became difficult to manage. They were prone to deafness, overly in need of affection and pampering as well as displaying other developmental problems. This lead the beginning of the breed and its eventual extinction to last a meagre period of less than 30 years.

Originally from Canada, specifically from the province of Labrador, this was a slim-looking gangly dog which appeared to be a mixture of different working dogs. They were companions of local fishermen and witnesses attested to their impressive aquatic skills.

Their disappearance was due to two main factors. First, Canada restricted dog breeding in an attempt to encourage sheep farming. Secondly, a rabies epidemic quarantined the animals and contributed to their eventual extinction. Despite this, the breed evolved to become a variety of different breeds which are still popular today, including the Labrador Retriever.

Also known as the Urrador, the Rastreador Brasileiro (translated as the Brazilian Tracker) was a canine breed endemic to the South American country from which it derives its name. Large in size, strong and solid in body, it was commonly used as a hound dog. It disappeared at the end of the 20th century with human negligence to blame. After a terrible plague of insects corrupted local crops, an insecticide was used to protect the fields. However, a mixture of intoxication and strength of dosage lead to the eventual death of all Urrador breeding stock.

However, it is believed that this dog may yet have a reprise as efforts have been made to try to breed the dog back into existence. Reports are as of yet inconclusive, but as the dog did not die from natural selection, there is hope of its continued survival in the future.

Although not native to Cuba, this breed nonetheless proliferated on the island. Here it was used for two reprehensible purposes: fierce dog fighting and retrieving escaped slaves from land holdings. Their body was solid and robust, with strong legs and a keen sense of smell.

After the abolition of slavery was declared, the breeding of the Dogo Cubano (also know as the Cuban Mastiff) ceased to be of interest. Specimens were crossed with other breeds and it was eventually lost.

Native to Polynesia and New Zealand, the Kuri was a dog used by Maori tribes as a source of food as well as for their fur which they used for clothing. From the records we have of this breed, it has a wolf-like appearance except with light fur. It was also said to refrain from barking.

Towards the end of the 19th century, it became completely extinct for a combination of reasons. One of them is the introduction of European cattle to Polynesian islands after colonization. As the Kuri fed on these cattle, the colonialists took charge by hunting them to protect their herds. Just one more example of colonialism's exploitative and often murderous influence on other nations.

If you want to read similar articles to 15 Breeds of Dog That No Longer Exist, we recommend you visit our Endangered animals category.

15 Breeds of Dog That No Longer Exist 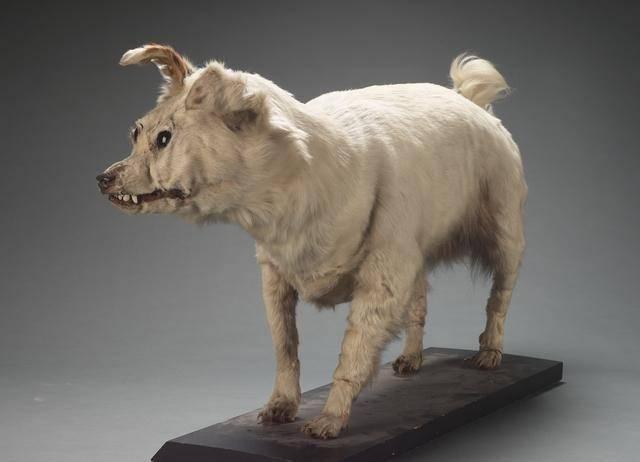 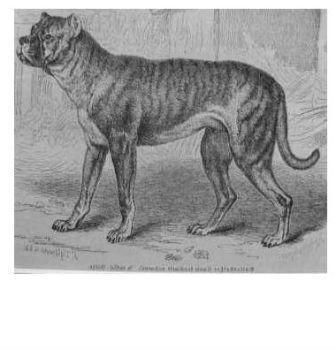 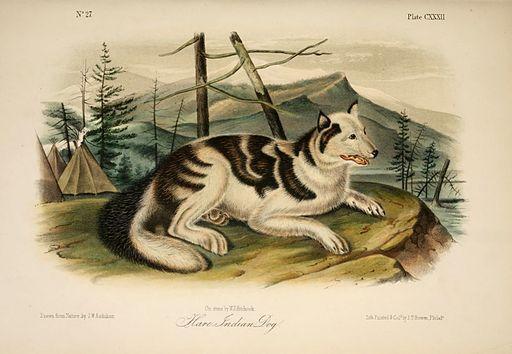 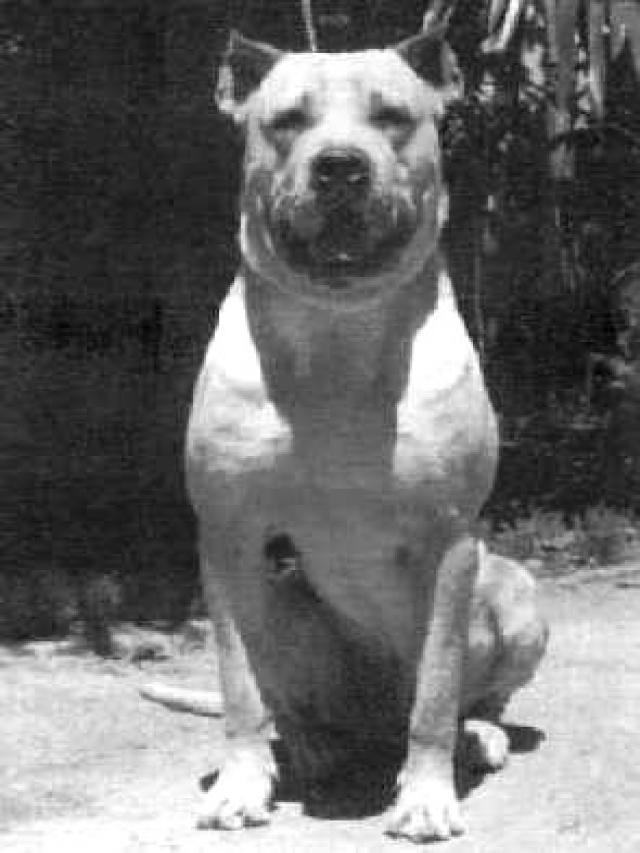 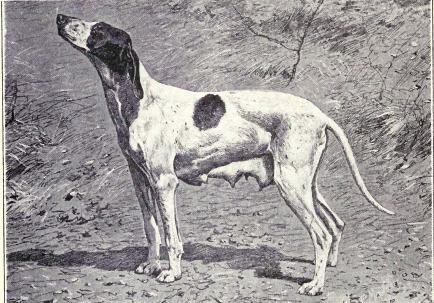 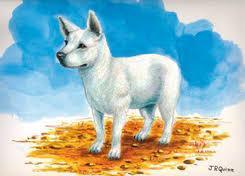 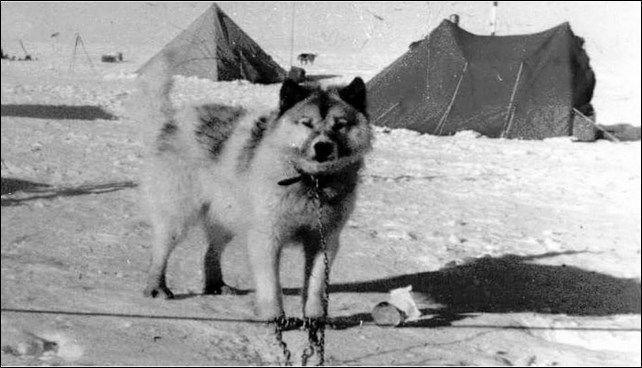 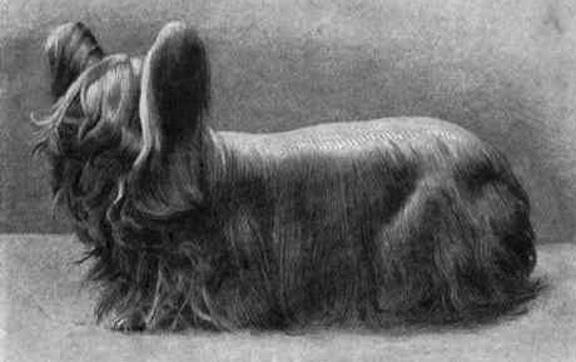 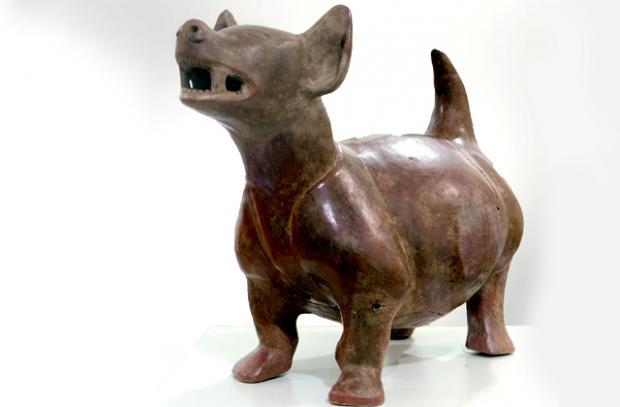 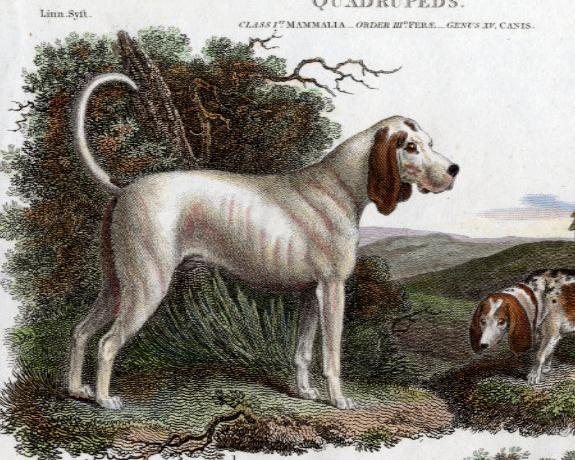 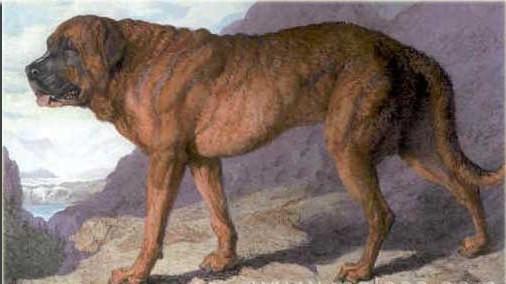 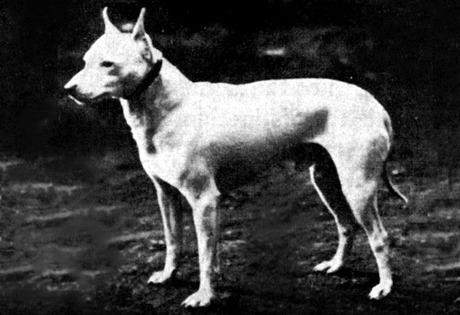 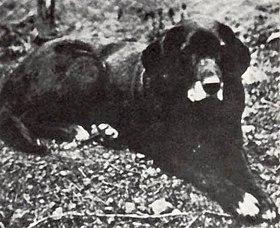 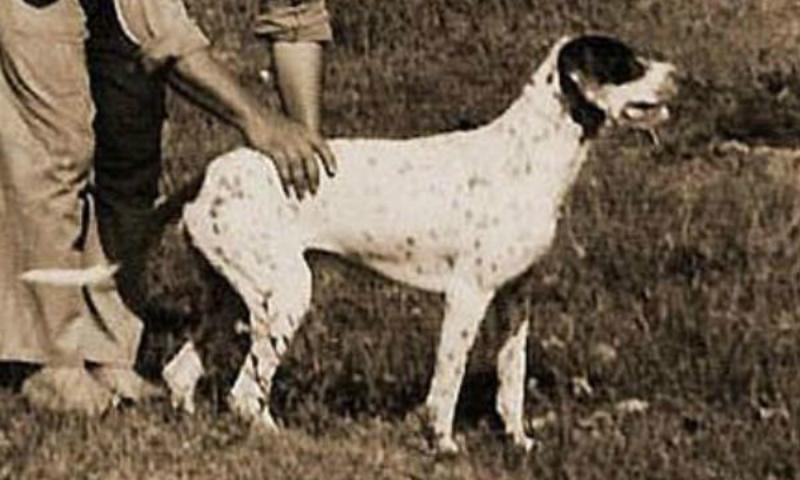 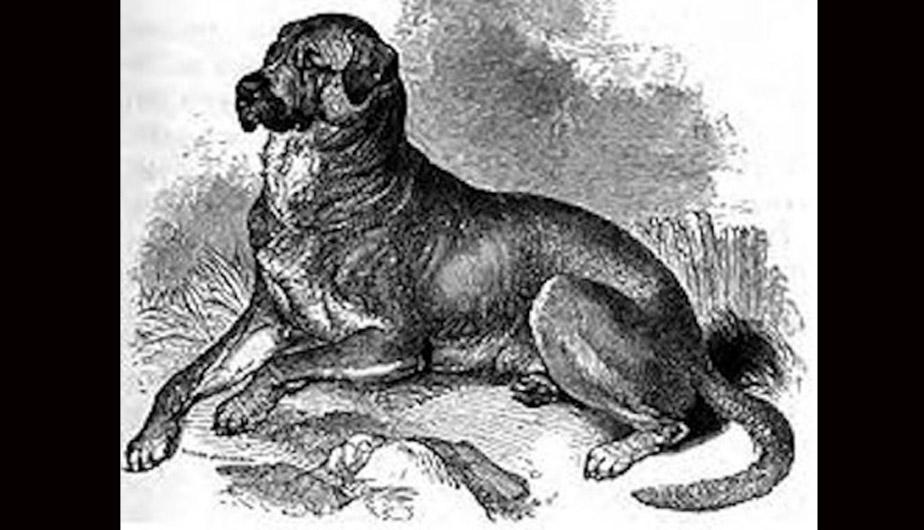 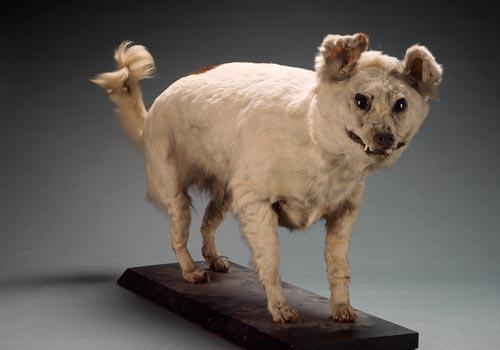