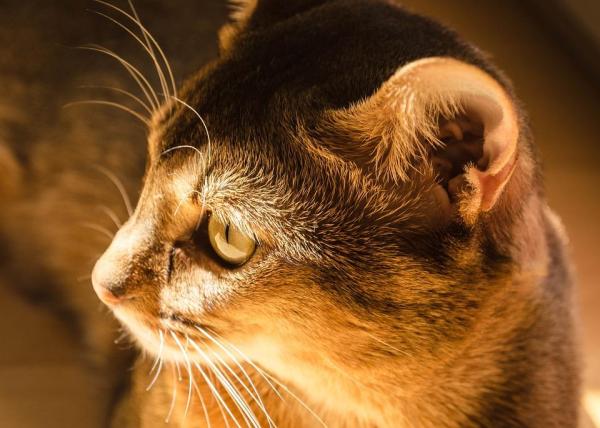 We all know that cats were revered in Ancient Egyptian civilization. Not only is there artistic and fossil evidence for this, the Ancient Egyptians even worshiped a cat in the form of Bastet, the cat-headed goddess of healing and womanhood, protector of the home.

So, it is hardly surprising to find that the domestic cat evolved from Egyptian and Near Eastern populations of African wildcats. All cat breeds could, therefore, be considered originally Egyptian. However, in this AnimalWised article we are going to look at present-day Egyptian cat breeds, both domestic breeds and wild cat species. Keep reading to learn more about these unique breeds from the ancient home of cats!

You may also be interested in: 8 Gray Cat Breeds
Contents

The origins of the Abyssinian cat are still a mystery. The noble appearance of this breed is similar to Ancient Egyptian statues, and, according to TICA, Abyssinians are one of the oldest cat breeds[1]. Recent research has suggested that they may in fact have originated in South Asia, but their likeness to Egyptian cats and the possibility of different crosses has left the discussion open to debate.

The name Abyssinian comes from the name for Ethiopia under British rule, Abyssinia. This is where it is believed that the first specimens of the breed were brought to Britain from. The breed was developed to its current standards in the UK.

Abyssinian cats are characterized by their cougar-like appearance, with a triangular head, wide ears and sandy coat color. They are athletic, agile and known for being a very playful cat breed. They are also very intelligent and make engaging and active companions.

The Egyptian Mau is the most popular of all Egyptian cat breeds. They are the only domestic cat that has naturally occurring spots, giving them an exotic appearance. Similar looking spotted cats are depicted in Ancient Egyptian paintings and described in hieroglyphs, suggesting that the origins of the Mau go way back to when cats were first domesticated.

The name ‘Mau’ comes from the Egyptian name for cat, which also sounds like the meowing sound cats make. Interestingly, these cats are also known for a distinctive ‘M’ marking on their foreheads, sometimes called the “mark of the scarab”.

Egyptian Maus come in silver-grey, smoke or brown shades, with clear spots on the body and stripes on the tail and extremities. They are elegant but highly athletic cats. In fact, the Mau has been recorded as the fastest domestic cat breed, thanks to a pocket of fur behind their legs which allows them to take longer strides. Egyptian Maus built special bonds with their owners, making very loyal companions. However, they can be aloof and wary of strangers.

The Chausie is another Egyptian cat breed, although it is a hybrid cat and not recognized by associations such as the CFA. Like the Abyssinian, these cats resemble cougars, although they are actually a hybrid between Jungle cats (Felis chaus) and domestic cats. The breed first appeared in Egypt, where Jungle cats and domestic cats appear to have a record of mating that goes back several centuries[2].

Chausies are similar in appearance to Jungle cats. Their hybrid heritage is also responsible for Chausies being among the largest cat breeds in the world. Chausie cats are active, intelligent, and independent in nature. They retain some of the hunting instincts of wild cats, but are affectionate and playful, developing strong bonds with humans.

So far, the three breeds we have looked at are the only recognized domestic Egyptian cat breeds. However, there are also incredible wild cat species found in Egypt, such as the following:

The Jungle cat (Felis chaus) is, as we have said, a wild cat species from which the Chausie has been bred. Although it is called a ‘Jungle’ cat, this adaptable species lives in wetlands, grasslands and shrubby forests in different parts of the Middle East, South and Southeast Asia including, of course, Egypt. Mummified remains of what appear to be cats have been found in Egypt, suggesting that they may have been among the first to be domesticated by Ancient Egyptians.

Jungle cats have sandy brown fur, and are the largest of the Felis or wild cat species. They are currently listed as least concern in the IUCN Red List, but their populations are in sharp decline in countries like Egypt. Hunting and trade of Jungle cats is prohibited in several countries under the CITES agreement[3].

The Sand Dune cat or Sand cat (Felis margarita) is the only desert-dwelling cat. It has special adaptations such as fur on its feet that allow it to walk in the sand, and can withstand the extreme hot and cold temperatures characteristic of deserts.

There is only limited information about this elusive species, although it is known to occupy areas of Southwest and Central Asia as well as North Africa. The last recorded sighting of Sand cats in Egypt was in the 1980s and, although there have been alleged sightings since, these have not been confirmed. The current population of the species is difficult to assess, although the IUCN lists their status as least concern as of 2016[4].

Although there are still debates around the subject, the most accepted hypothesis is that domestic cats evolved from Near Eastern and Egyptian populations of the African wildcat (Felis lybica). The African wildcat is a small species, weighing around 7 kilos. It has short yellow, ash or sandy fur, with dark stripes from the back to the tail.

The wildcat species is known for its sociable nature and for being a good hunter, its main prey being small mammals and rodents. Both these traits that make it suited to becoming the first domestic cat. African wildcats are an intelligent species and studies have suggested that they may, in fact, have domesticated themselves in places like Egypt[5].

If you want to know more about the evolution of the domestic cat, and its relation to cats in Ancient Egypt, take a look at our article on the history and evolution of cats.

If you want to read similar articles to Amazing Egyptian Cat Breeds, we recommend you visit our Comparisons category. 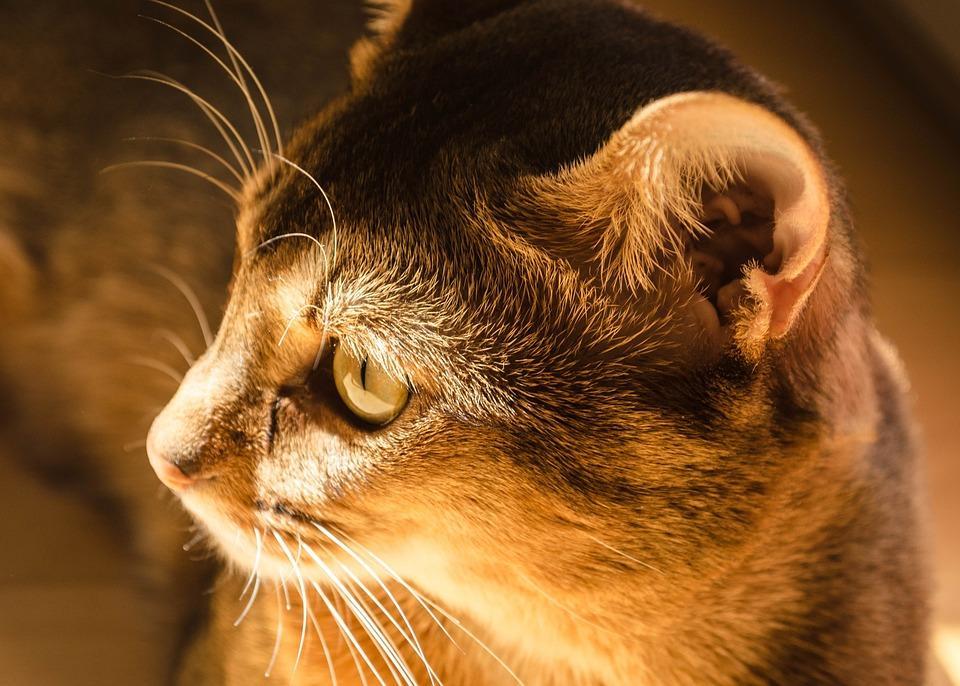 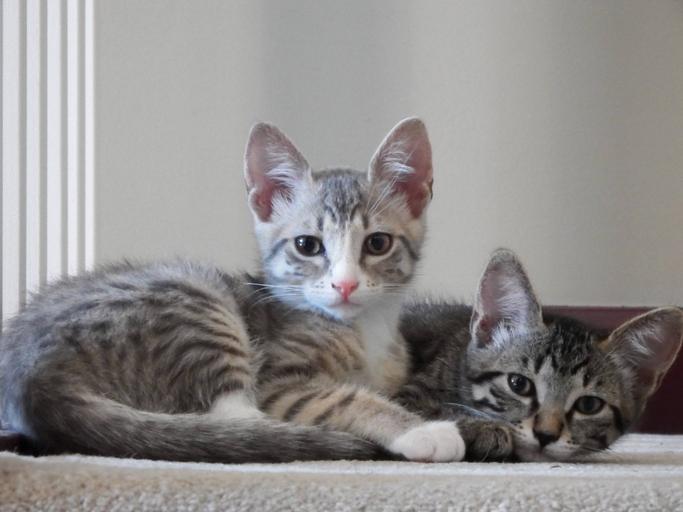 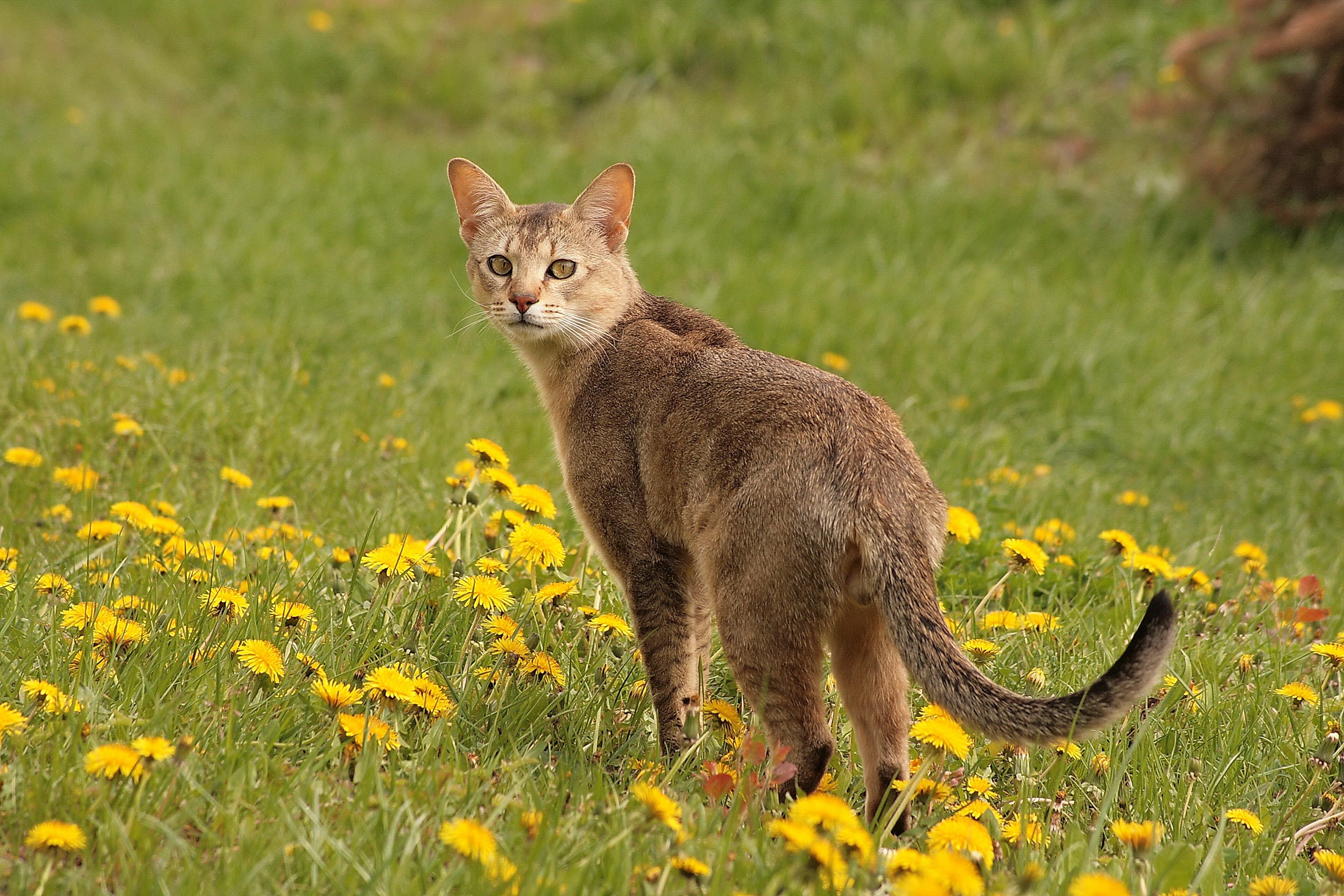 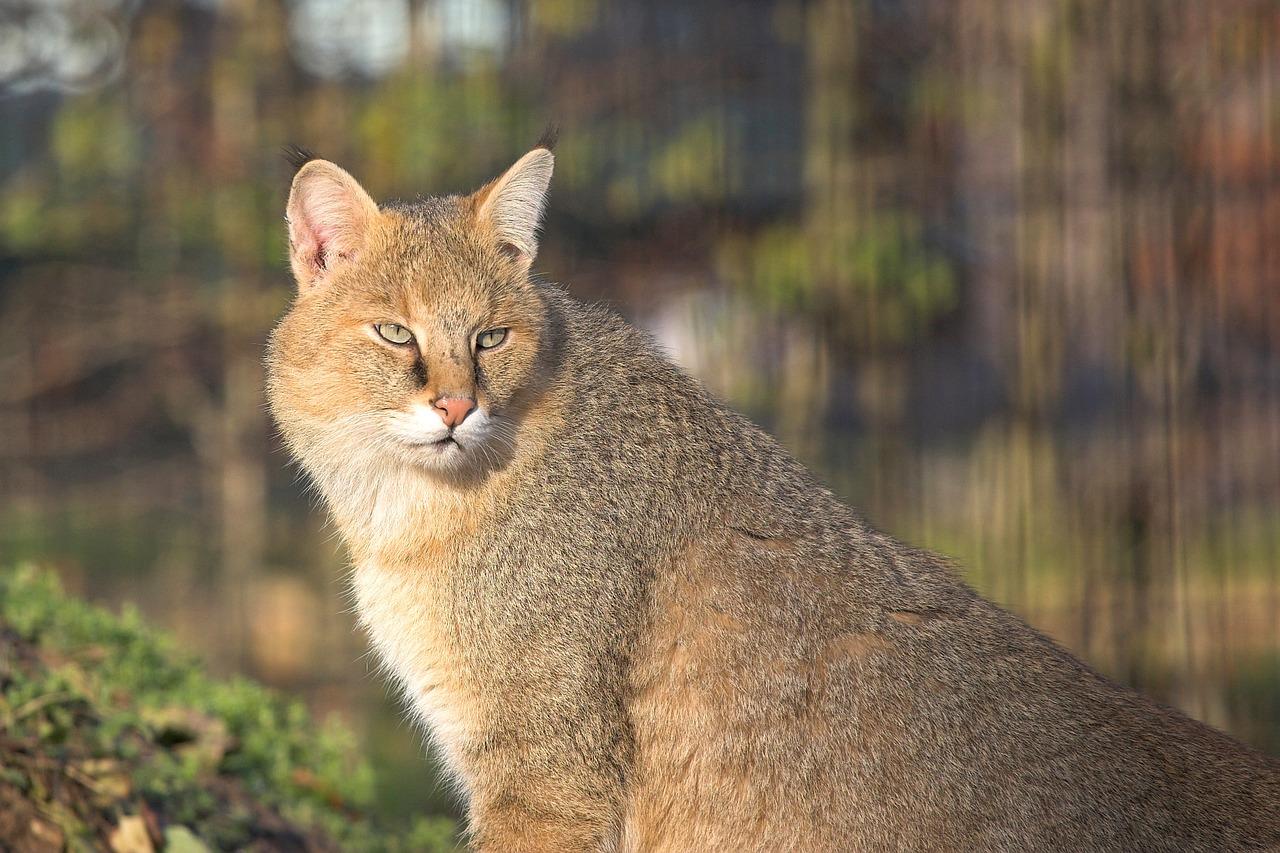 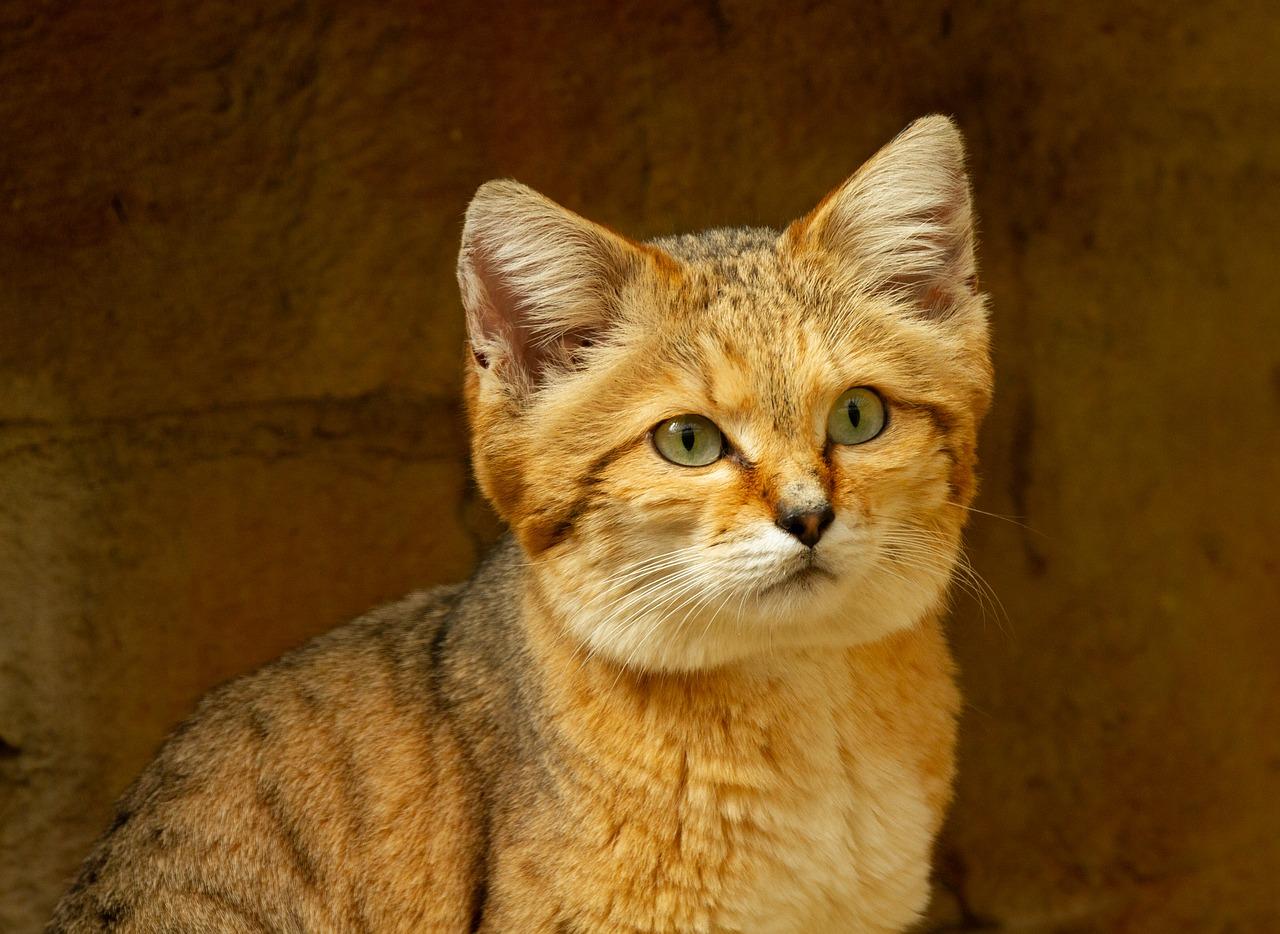 1 of 6
Amazing Egyptian Cat Breeds
Back to top