The Boxer dog breed is a very popular animal with many guardians. People fall in love with their affectionate and playful character as much as their distinct features. However, there are many people unfamiliar with the dog who find them intimidating. Since they are an athletic and muscular breed, some think they might be dangerous. However, it is important to know they are not a dog known for a tendency for aggression or attacks.

If you are thinking of adopting one of these dogs, it is healthy to ask are Boxer dogs dangerous? At AnimalWised, we dispel any myths about this breed and reveal their true character and temperament. We also look at any possible legal restrictions in keeping them.

You may also be interested in: Are Rottweilers Dangerous Dogs?
Contents

The history of the Boxer dog breed

The boxer is a German dog breed which first defined its standard in the 19th century. According to the FCI (Fédération Cynologique Internationale), the ancestor of the boxer was the Bullenbeisser, a molosser-type dog with origins in the ancient Assyrian era (around 2000 BC).

Most molosser type dogs, generally considered the progenitor of the different Mastiff dog breeds, were often used as fighting or hunting dogs. Due to their large size, they were particularly used for big game. This began sometime between the 12th and 14th centuries. It wasn't until the 19th century that these breeds became recognized for their intelligence and were considered for other purposes.

The Boxer dog was developed at the end of the 19th century from the Bullenbeisser. At this point, they were used as a watchdog for homes, farms and livestock. Even today, we can see alertness as a general character trait of all types of Boxer dog breeds. It is not uncommon to hear them barking at a stranger which passes the home they consider their territory.

In 1895, breeder Friedich Roberth first founded the ‘Munich Boxer Club’ and created the first breed standard. By the twentieth century the Boxer stood out as a good breed for training. This led to their use as military dogs ​​in World War I. They were involved in tasks such as ‘sniper detection’, but were rarely used for this purpose in World War II. The German Shepherd breed was more commonly used for this purpose.

Although potentially dangerous if you were an enemy sniper not wanting to be caught, the Boxer was not used as an attack dog. Eventually, they became much more popular as a companion animal. This is due to their personality which is loyal and loving, making them an excellent companion for all types of families.

If they are not dangerous, why are they called Boxers?

The prejudice against Boxer dogs may be in part due to their name. Boxers are tough and known for fighting, making us associate these traits with the dog breed which bears their name. However, there are several theories that explain why the boxer was given this name:

Although some people have the misconception that Boxer dogs are dangerous animals, it is not true. However, this misconception usually comes from somewhere. They may have heard they were illegal in some countries or have heard of attacks. While it is difficult to determine why one person may have the wrong impression, there are some general characteristics which may contribute to these beliefs:

Is it legal to own a Boxer dog?

To know whether it is legal to keep a Boxer dog as a pet, we need to look at the laws of each country. Although controversial, many countries control animal populations via breed-specific legislation. Essentially, this means certain dog breeds are banned because they are said to be dangerous. This is related to certain breeds such as the the Pit Bull, as many people question whether they are dangerous also.

The issue is a complicated one. The reputation for danger in certain breeds exists for various reasons. Statistics on dog attacks are one of the most important factors. Pit Bulls have high statistics for attacks, but this does not necessarily mean this is because of their breed. The Pit Bull is a breed commonly associated with criminal activity, has been used in dog fighting and often suffers abuse. Legal restrictions have been placed on their adoption in come countries.

For many reasons, breed-legislation does not work. Much more important is education, socialization and information. However, there are some breeds which do have a tendency towards aggressiveness due to this trait being encouraged during breeding. For example, if dogs have been used for many years as attack dogs, they may have a greater predisposition towards aggressiveness. With training and socialization, these tendencies can be reduced.

Breed-specific legislation depends on location. Not only will this depend on the country, but the region. For example, some states in the USA may have legislation restricting the ownership of some breeds, but not others. The Boxer is not a breed which is banned in any US state, nor can we find municipalities with a ban on boxer dogs. However, you should always check your local laws to determine whether keeping a certain breed is legal.

Internationally, Boxers had some limitation in the Ukraine, but recent legislation has changed this. At the time of writing, we cannot find evidence that it is illegal to Boxer dog breeds in any territory.

The true temperament of Boxer dogs

Without hesitation, we can say that the Boxer is not a dangerous dog. In fact, they are a dog many ethologists claim are a particularly good breed for children. According to their general temperament, they are loyal animals which become devoted to their family. Their enthusiastic attitude, cheerful presence and capacity for affection has given them the reputation of being an ‘eternal puppy’.

As we have previously stated, the Boxer is usually alert and has a protective instinct. However, they are generally very friendly animals, even with strangers. They place their trust easily in their family and will be very obedient with a proper education.

Their active demeanor and fun personality means they love to play. They can also be mischievous and their desire to play makes them unsuitable for guardians who cannot offer proper mental stimulation. They also have a high level of reasoning, something important when they were used as working dogs.

Although it does not make them dangerous, their need for attention means they can become bored easily. If we do not provide them with enough engagement, they can become destructive and register other problematic behaviors. They are not dogs which can be left on their own for long periods of time, otherwise they are likely to suffer from separation anxiety. Despite being intelligent, they can be somewhat stubborn and wilful.

The importance of Boxer education

All dogs need to be properly educated. From learning to urinate outside to reducing certain instincts, training allows them to live in the domestic environment peacefully. The benefits are for the dog as much as their human family since it reduces problematic behavior and stress, while encouraging strong bonds and affection.

The Boxer dog breed's past usage as fighting dogs is remote. They are not aggressive or dangerous. However, they are easily excitable and can be a little clumsy when they play. For this reason, it is important to supervise their play with young children and small animals.

Circumstances in which a Boxer dog may attack are restricted to when they feel threatened or they sense their family is being threatened. When the dog has little security, has been through trauma or is negatively stimulated, behavioral problems can be exacerbated.

Proper education, socialization and positive reinforcement are the best ways to prevent behavioral problems in Boxer dogs. However, this is the same with any dog breed. If we do not provide them with the training, support and affection they require, this is when problems arise.

If you want to know more about what to expect when caring for a Boxer dog, as well as their training requirements, you can look at this video: 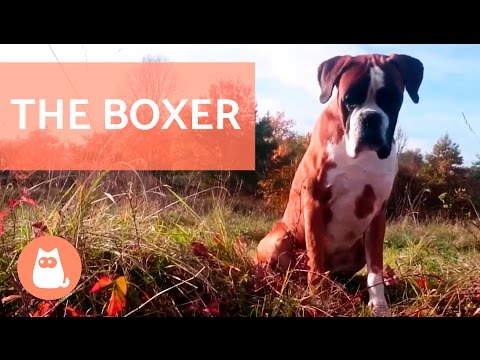 If you want to read similar articles to Are Boxer Dogs Dangerous?, we recommend you visit our Facts about the animal kingdom category.

Bibliography
Are Pit Bulls Dangerous?
Are Akita Inus Dangerous Dogs?
Are Blue Bottle Flies Dangerous?
Are Christmas Ornaments Dangerous for Pets?
Related categories
Endangered animals
Most read
1.
What Animal am I According to my Zodiac Sign?
2.
What Does It Mean When a Cat Shows Up at My Door
3.
10 Most Beautiful Animals in the World
4.
The 10 Most Solitary Animals in the World
5.
Why do Dogs Get Stuck when Mating?
6.
Animals With Scales - Full List
7.
My Female Dog In Heat Won’t Accept A Male - Causes
8.
How Many Types of Lions Are There?
Are Whale Sharks Dangerous to Humans?
Are Lizards in Your House Dangerous?
Why Are Hippos Dangerous? Hippopotamus Attacks
Life Expectancy of Boxer Dogs
Are Bats Dangerous to Humans or Pets?
Are Raccoons Aggressive Animals?
The 10 Most Dangerous Animals in California
Are Komodo Dragons Venomous?

2 comments
Rating:
Regina
04/03/2021
As a Boxer owner, I found this article to be the most accurate I've ever read. It cannot be stressed enough how energetic and playful these dogs are! The "eternal puppy" is so true!

Administrador AnimalWised
11/03/2021
Thanks for sharing your experience Regina!
Rating:
Mee
05/08/2020
All dogs are only as good as their owners training. The owner has to remember dogs are pack animals and there is always an alpha male and alpha female in the pack. The owners have to established this by eating first before the dog eats. Always go through the door first. Don't allow the dog to snatch food. Always get the dog to make eye contact with you before giving the dog stuff. Always praise the good good behaviour with a big fuss and some attention. A dog always needs to know its ranking in the pack and the alpha shows them that. And always get the correct lead to suit the dogs behaviour. I personally love the cannyco collars. Good luck..
Are Boxer Dogs Dangerous? 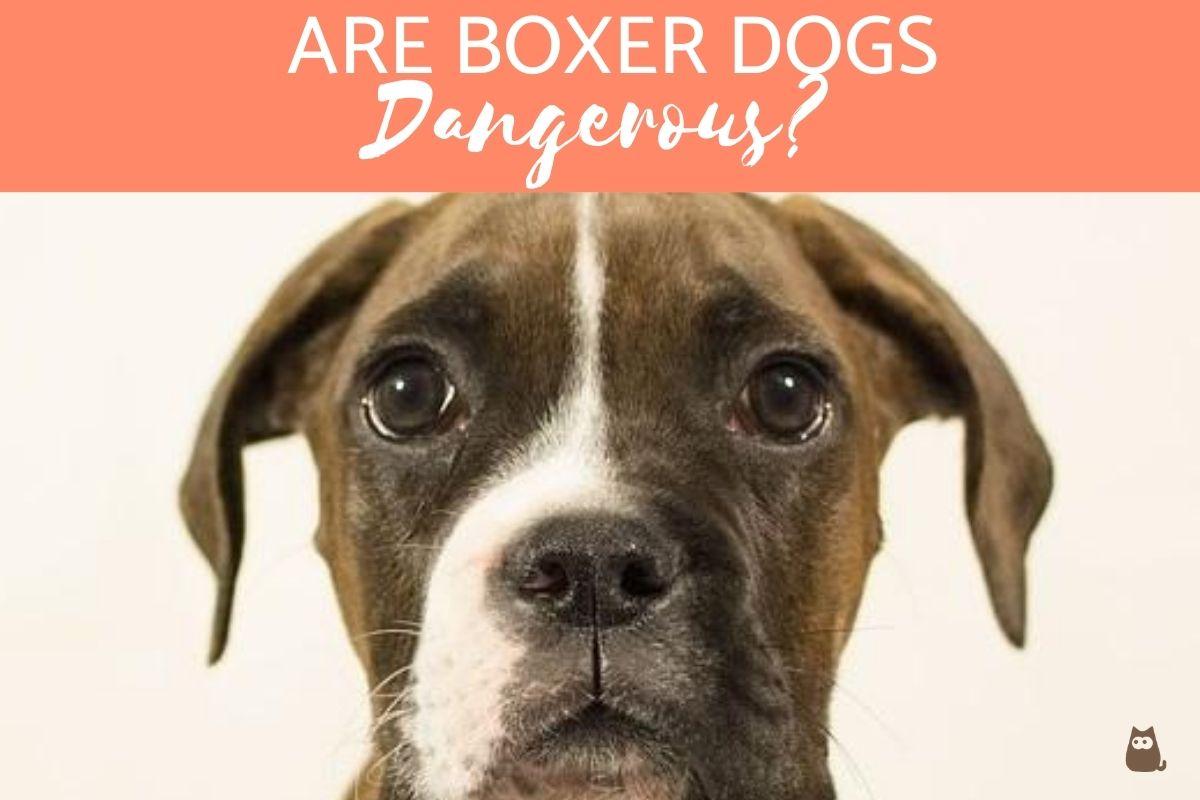 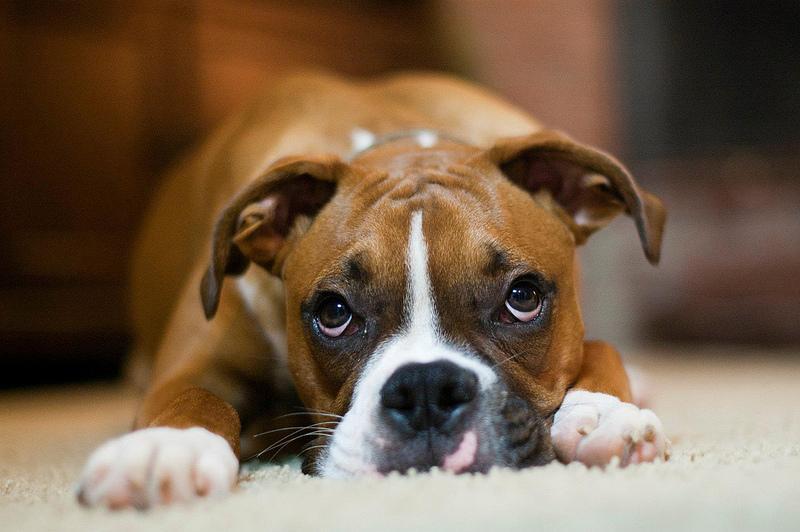 1 of 3
Are Boxer Dogs Dangerous?
Back to top