Butterfly vs. Moth - Differences Between Moths and Butterflies

By Nick A. Romero, Biologist and environmental educator. March 30, 2022

There are few creatures in the animal kingdom which are so similar, yet have such different reputations. One is considered a wonder of nature and a joy to witness. The other is generally perceived as a pest and a threat to wool cardigans everywhere. Despite having many similarities, there are key differences between moths and butterflies which help us to understand such disparate reputations.

At AnimalWised, we compare butterflies vs. moths. We look at the taxonomic differences, behavioral differences and, perhaps most obviously, their physical differences.

You may also be interested in: Body Parts of a Butterfly and Their Functions
Contents

While we will be detailing the differences between moths and butterflies, we can see they are good reasons why people may consider them similar. They are both types of flying insect with large wings in comparison to their body, although some are certainly larger than others. When we look at their taxonomic classification, we can see they are part of the same order:

There are around 180,000 species of insect in the order Lepidoptera. They are one of the most distributed animal species in the world. Taxonomically, both are referred to as lepidopterans. Moths are lepidopterans which are not considered butterflies, something which may seem odd since only around 10% of lepidopterans are butterflies. This means there are many more moths in the world than butterflies.

From the taxonomic point of view, there is some confusion over their classification. There are many clades, superfamilies and genera which can present various levels of differences and similarities. For example, we can look at the superfamily of the Lepidoptera order called Hedylidae, commonly known as moth-like butterflies. These are technically butterflies, but with behaviors and appearance more similar to the moth.

Also, in order to facilitate certain studies and in an attempt to establish certain differences within the Lepidoptera group, certain ‘artificial’ classifications have been established. For example, depending on the size, reference is made to micro and macro Lepidoptera. Some differences have been made based on the antennae of the insect, a trait in which butterflies and moths differ. They are identified as Rhopalocera (club-shaped antennae) when referring to butterflies and Heterocera (varied antennas) when referring to moths.

Are butterflies and moths nocturnal?

When we compare butterflies vs. moths, we can see they share certain common characteristics. These relate both to their anatomy and their behavior. As we have seen anatomy of their antennae is part of their classification. Many of these criteria are not absolute and we can see some overlap.

A recent study shows that the change from nocturnality to diurnality for most butterflies is due to a change in their evolution[1]. Both butterflies and moths have a common ancestor, but it was believed that butterflies evolved at the same time as flowering plants. For this reason, they changed to become diurnal. However, this study appears to refute this theory.

The same publication also indicates the hypothesis that moths evolved to more diurnal behaviors due to their predation by bats. Since bats were more active at night, the belief was that this was developed as a protection mechanism. However, this study shows that moths and butterflies diversified before the presence of these winged mammals.

It is now suggested that butterflies probably changed to diurnal behaviors to take advantage of the nectar of flowering plants they could only obtain during the day. The general scientific consensus allows us to assert that butterflies evolved from moths.

Over time, certain criteria have been established to establish differences between butterflies and moths. Here we look at them in greater detail:

This has been one of the main features that differentiate these insects. In butterflies, these structures are thin and the tips end with a rounded ball or club shape. In the case of moths, the antennae structure are incredibly varied. Some are threadlike, feathery or comb-shaped, but they lack the protuberances that butterflies exhibit.

Another aspect that has separated a butterfly from a moth is their periods of activity. Butterflies are usually active during the day and moths at night or twilight. However, this is not an absolute criterion. In certain species this condition is broken. For example, the Madagascan sunset moth (Chrysiridia rhipheus) and the gypsy moth (Lymantria dispar) are active during the day.

In terms of colors, butterflies exhibit various shades and striking patterns. Moths tend to be of more sedate colorations and more of a monochromatic type. This trait also has its exceptions. For example, the comet moth (Argema mittrei) and the twin-spotted sphinx moth (Smerinthus jamaicensis) both have beautiful hues on their wings, as well as more distinct and beautiful patterns. Some butterflies also have more understated colorings.

Butterflies are usually more delicate and fragile in appearance than moths. The latter generally have sturdier and stronger bodies. Both butterflies and moths have an appearance which makes them look like they have fur. This is actually not hair like that of mammals, but specially developed bristles known as setae which resemble hair. Generally speaking, moths tend to be stockier and have fuzzier setae, while butterflies are longer and appear less furry. There are exceptions to both.

Moths have a high rate of predation by bats, so they have developed the ability through their hearing organs to listen to ultrasonic sounds emitted by these flying mammals. They do so in order to escape and avoid being eaten. Although butterflies also have these organs, they are not specialized for this purpose.

Although it has been difficult in terms of taxonomy to establish the exact classification of lepidoptera, science has managed to specify that of the around 180,000 species of these insects that exist, the majority correspond to moths. In this sense, moths are more diverse than butterflies.

As moths habits and routines occur mainly at night, courtship for reproduction is mainly based on chemical communication and sound emission. Although butterflies also communicate in this way, they also rely on colors and flight displays to mate. For this reason, vision is generally more important to butterflies.

Commonly, when moths rest they have their wings spread out to the sides. When butterflies are at rest, their wings are folded over their backs, opening and closing them periodically. It is believed that butterflies do this to thermoregulate their bodies as they are cold-blooded[2].

Different species of moths, are considered as pests in the larval phase. This is more so than butterflies. Although they feed on vegetation, they also feed on clothes, furniture and other textiles in the home. Some examples of these pest species include the corn earworm (Helicoverpa zea), goat moth (Cossus Cossus), carpenterworm moth (Prionoxystus robiniae) and common clothes moth (Tineola bisselliella).

Although considered pests, it is important to highlight that moths should not be eliminated as it can harm their ecosystem. We should look for alternatives that keep them away without harming them. Butterflies are not seen as the nuisance moths are and are generally a more welcome sight.

It has been identified within the moth families with the most poisonous species of all Lepidoptera. Some have stinging hairs during their caterpillar stage which can cause severe health problems in people and animals. In some cases, the toxicity can be fatal. Examples include members of the families Saturniidae, Limacodidae and Megalopygidae.

Butterflies and moths are also similar in many aspects. Among them we can highlight the following:

If you want to read similar articles to Butterfly vs. Moth - Differences Between Moths and Butterflies, we recommend you visit our Facts about the animal kingdom category.

References
Bibliography
How is A Butterfly Born? - Butterfly Life Cycle
Life Cycle of the Pine Processionary Caterpillars
Animals With Scales - Full List
Differences Between a Jaguar Vs Cheetah Vs Leopard
Related categories
Endangered animals
Most read
1.
What Animal am I According to my Zodiac Sign?
2.
10 Most Beautiful Animals in the World
3.
What Does It Mean When a Cat Shows Up at My Door
4.
The 10 Most Solitary Animals in the World
5.
Why do Dogs Get Stuck when Mating?
6.
My Female Dog In Heat Won’t Accept A Male - Causes
7.
How Many Types of Lions Are There?
8.
Animals With Scales - Full List
Differences Between a Swan Vs Goose Vs Duck
The Largest Insects in The World
Animals with Trunks - List of Trunked Animals
Herbivorous Animals: Examples and Fun Facts
Major Groups of Invertebrate Animals
Why Are Bugs Attracted to Light?
Differences Between Lions and Tigers
How Long Is the Life Cycle of a Butterfly?

Butterfly vs. Moth - Differences Between Moths and Butterflies 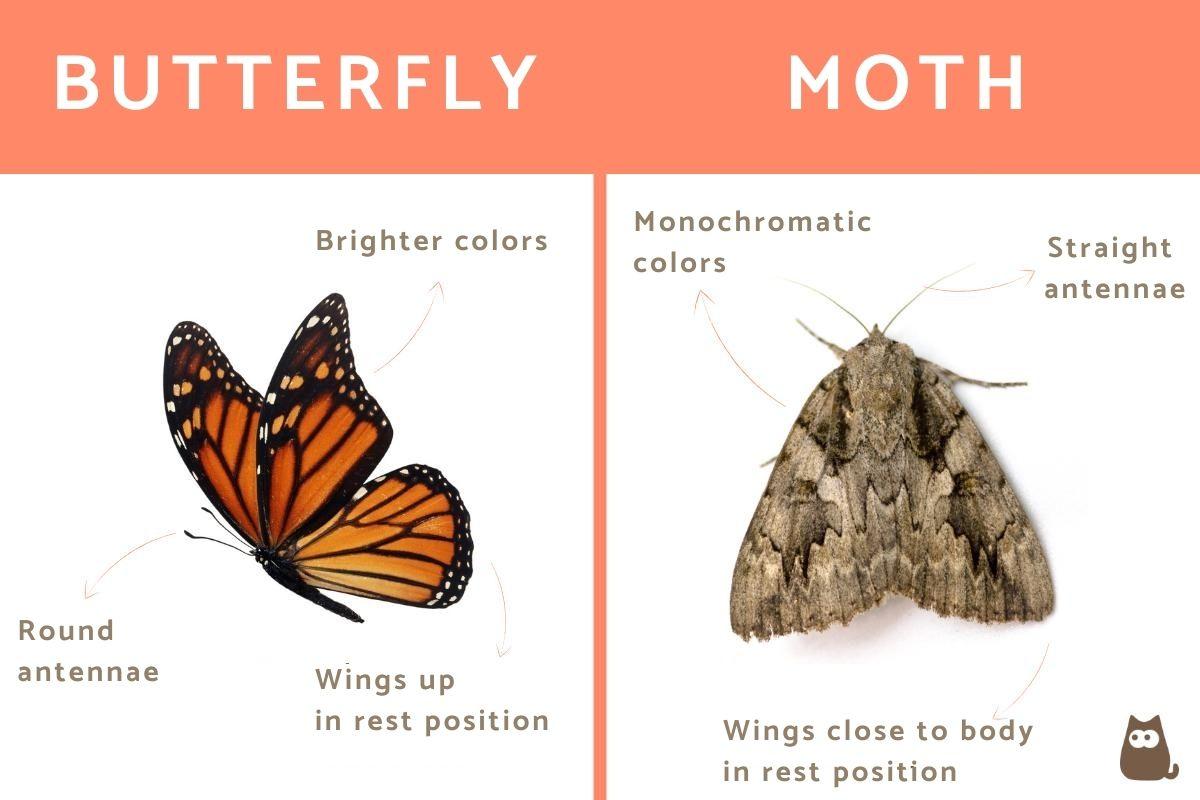 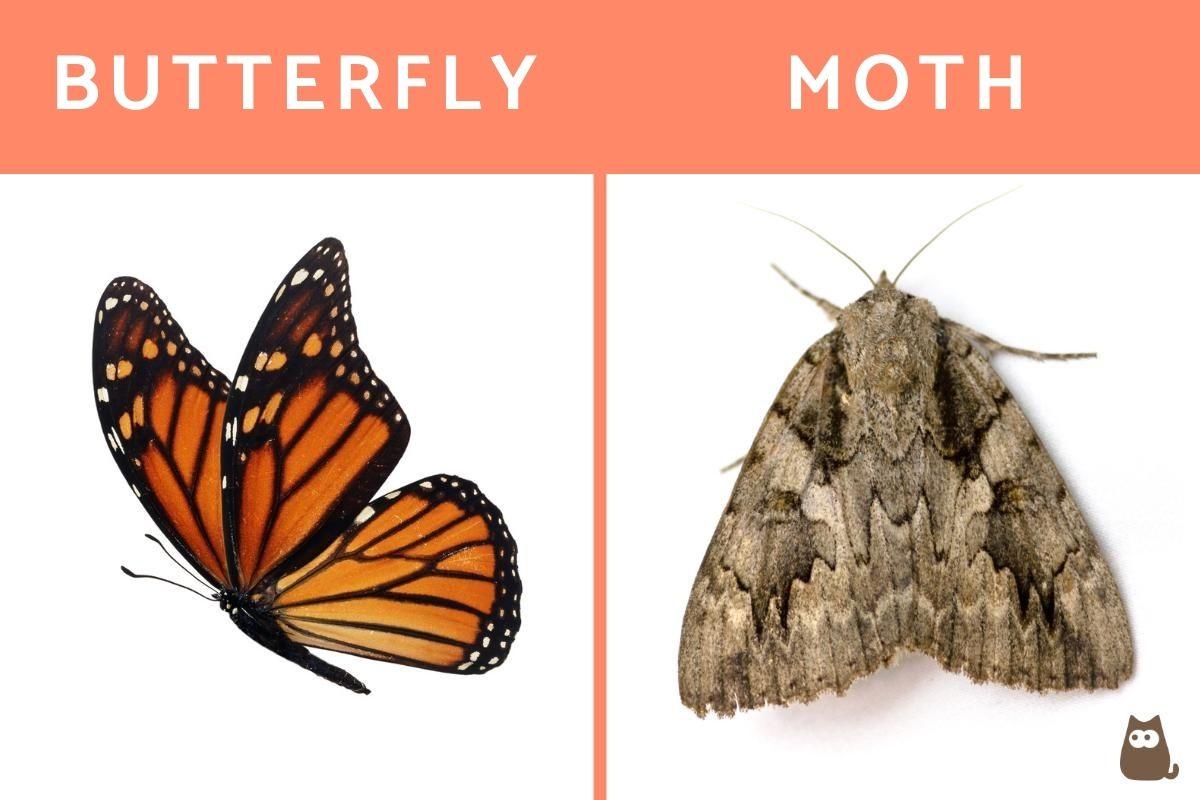 1 of 2
Butterfly vs. Moth - Differences Between Moths and Butterflies
Back to top