Elegant and colorful, the Chinese Crested Dog comes in two varieties: Hairless and Powderpuff. They usually appear in the same litter. Hairless dogs only have a crest of silky fur on the head and patches of fur on the feet and tail. Powderpuff dogs have fur all over their body. Their hair is known for being soft, long and shiny.

Although both Chinese Crested Dog varieties require special care to keep their skin and hair in perfect condition, they are the perfect dog breed for beginners. This is because their intelligence and docile character make training a relatively simple task. These dogs also require a lot of time being that they cannot spend long hours alone. Keep reading this AnimalWised article and discover more about the Chinese Crested Dog.

As with other dog breeds, the history of the Chinese Crested Dog is confusing and not well-known. What is certain is that these dogs existed in the 13th century in China and were traditionally used as mouse dogs on merchant ships. As for the appearance of the Hairless variation, it is thought to come from Africa. This belief comes from several nineteenth century texts that mention the African Hairless Terrier. However, nowadays, researchers say that the Chinese Crested Dog shares genetic origin with the Mexican Hairless Dog, also known as Xoloitzcuinti. In addition, Chinese Crested Dogs, Mexican Hairless Dogs and Peruvian Hairless Dogs carry the same mutations. Be that as it may, Chinese crested dogs were unknown outside their country of origin until the 19th century, when they entered Europe.

It was at the end of the 19th century that Ida Garrett, a breeder who loves hairless dogs, began promoting the breed in Europe. Today the Chinese crested dog remains less known than other breeds. However, they are increasingly acquiring a greater degree of popularity among adopters for their relatively simple care and training.

The Chinese Crested Dog is a small and light dog breed. Their body is relatively long for their height. They are very flexible. The back is horizontal, but the rump is rounded. The chest is deep and the lower line retracts moderately at belly level. As for the hair that this dog presents, there are two different varieties: the Hairless and the Powderpuff. The first one has a long crest, fur on the legs and the tip of the tail. While the Powderpuff has a veil-shaped coat all over its body. Their hair is thin, silky and long.

The head of the Chinese crested is wedge-shaped and the skull roof is slightly rounded. Their nose is prominent and can be any color. Their teeth may appear poorly aligned and may even be missing in the hairless variety. Their eyes are medium and of the darkest possible color. Their ears are erect and set low. Drooping ears are only possible in the Powderpuff variation. The Chinese crested dog's tail is long and set high. It is almost straight and does not bend over the back or curl up. Their tail is lifted straight or to the side when they're active and hangs naturally when they're resting. In the Powderpuff variety the tail is completely covered with hair. In the hairless variety, the tail has feathered fur, but only in the two distal thirds. In both types, the tail gradually thins, being thicker at the base and thinner at the tip.

The Powderpuff's hair is double-coated and covers the entire body with characteristic veil-shaped fur. The variety of the Hairless dogs only have a crest on the head, hair on the feet and at the end of the tail. The skin is delicately grainy and soft. Any color and color combination is possible with both varieties of this breed. So it is not strange to see a white Chinese Crested Dog with black spots.

Lastly, the International Cynological Federation (FCI) states that the breed standard must have a height at the withers from 9 to 13 inches in males, and 9 to 11 inches in females. As for the weight, it is variable but it is recommended that they don't exceed 12 lbs.

The Chinese Crested Dog is characterized by being a pleasant, sensitive and very cheerful breed. They tend to be very loyal to their companions and remain very attached to a particular person, which they consider their friend. They usually present a shy and always alert personality.

Well socialized, the Chinese Crested Dog can get along very well with people, other dogs and other pets. However, by nature they tend to be shy about new people and situations. It is, therefore, very important to socialize the dog from a young age to prevent behavioral problems during adulthood. This way, the dog will not get easily scared and take refuge when face with a new experience.

Fortunately for Chinese Crested companions, these dogs are smart and easy to train. Despite this, the breed does not stand out in dog sports. This may be due to their lack in popularity among the general public. Be that as it may, the best method to educate the Chinese Crested is positive reinforcement. A good example would be through clicker training.

When the Chinese Crested Dog receives enough exercise, company and are well educated and socialized, they do not usually present behavioral problems. However, when these factors are insufficient, Chinese Crested Dogs tend to develop separation anxiety, destructive habits and digging in the garden.

These dogs are excellent pets for families with older children, for couples and for single people. However, they are not good pets for families with young children because they tend to get hurt by the rude treatment of children. It is important to note that they are only good pets when they receive constant companionship, in addition to the normal care that any dog ​​requires. Chinese Crested Dogs are not good animals for people who spend all day away from home.

The hair of the Powderpuff variety should be brushed and combed at least once a day. A brush made of natural bristles or metal spikes is recommended. It’s also important to bathe the Powderpuff when it is really dirty, using a natural shampoo with neutral pH.

On the other hand, the little hair presented by the Hairless variety only needs brushing two or three times a week. Since its fur is so thin, it usually gets tangled up easily. When this occurs, it is advisable to undo the knots with the help of our own fingers. This way, we can be very careful not to hurt them. Once unraveled, we will proceed to comb it with the named brushes. Another point to keep in mind about the Hairless dogs is that their skin is more exposed to changes in temperature because of their lack of fur. This means that they are more vulnerable to being damaged by sun rays, cold weather and other factors. Therefore it is essential to bathe it every 15 days with a neutral hydrating pH shampoo. Once a month, after bathing, it is recommended to exfoliate their skin and apply a hydrating product by massaging their entire body. For this, we can resort to baby body oil or vegetable oils, always natural.

In both varieties of Chinese crested it is important to take good care of the denture and wash it frequently. To do this, we must always use products for dogs and never products for humans.

The Chinese crested dog is an active animal that needs daily exercise. Due to their small size, they can do much of the exercise indoors. However, it is also necessary to take them out for a walk twice a day. The tug of war games are not advisable because the breed usually has a weak denture.

If you have a hairless Chinese crested dog, it is important to put sunscreen on them. This is especially important if their skin is white or pink. Doing this we can avoid skin burns. This does not mean that we should prevent the dog from sunbathing, because this is one of the main sources of vitamin D that the animal has. We should simply pay special attention to their skin care.

If the weather is cold, putting a coat on them is a great idea so that their skin does not dry out and remains protected. Keep in mind that their skin is fragile and can be injured with branches and hard grass, so it is better to avoid places with weeds and tall vegetation.

Both Hairless and Powderpuffs need a lot of company. They are dogs that must be accompanied most of the time or will develop destructive habits and separation anxiety.

The Chinese crested dog tends to be healthy and is not as susceptible to hereditary diseases as other dog breeds. However, they have a certain propensity to the following pathologies and conditions:

As we mentioned in previous sections, to avoid damage to the skin of the Chinese Crested it will be essential to take precautions. For example, using sunscreen before going outside, moisturizing their skin and using neutral pH shampoo. It will also be essential to go to the veterinarian periodically to provide mandatory vaccinations and follow the deworming schedule. For any anomaly, you should always go to a professional for an examination.

Upload a picture of your Chinese Crested Dog 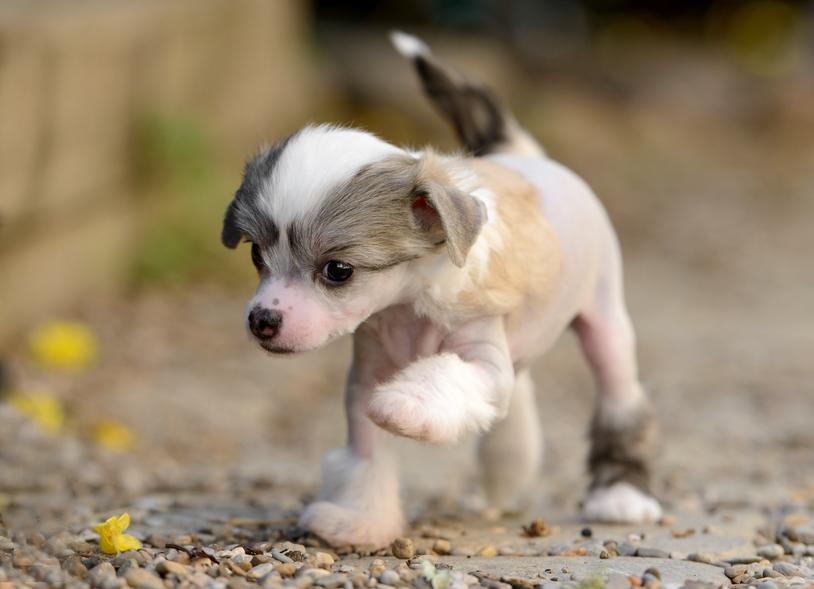 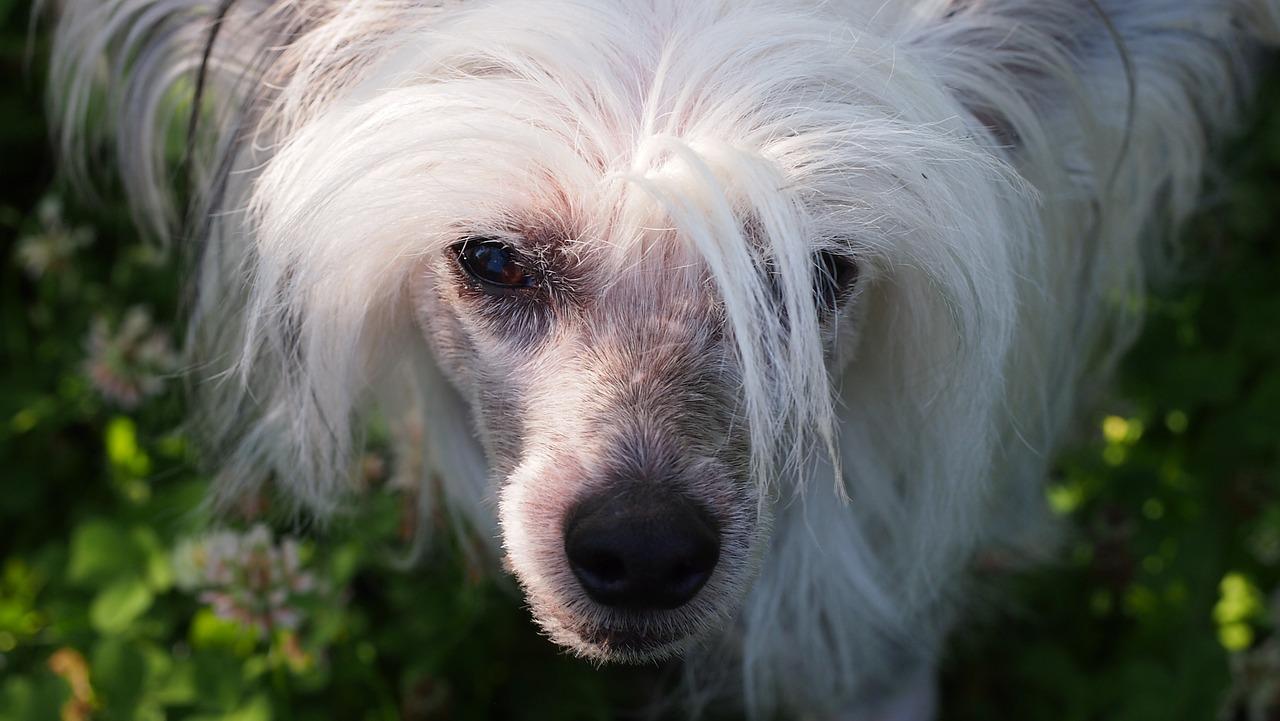 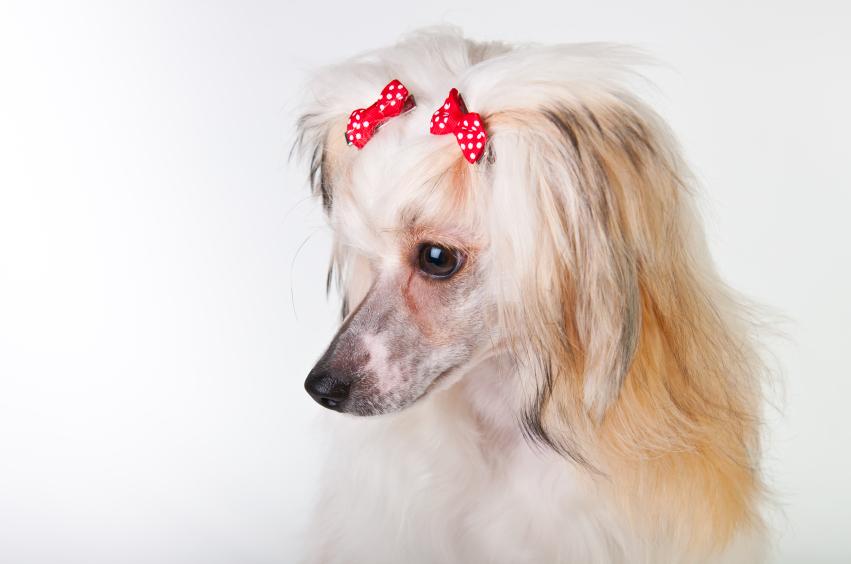 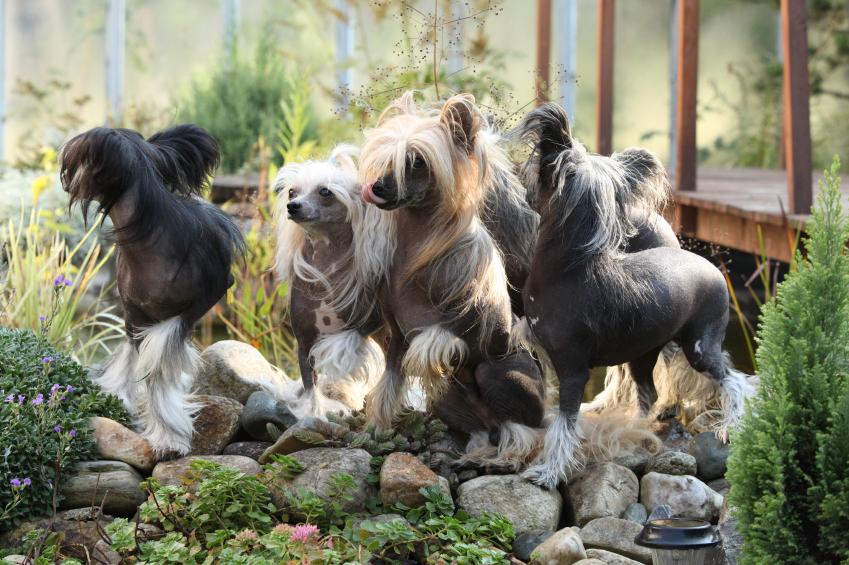 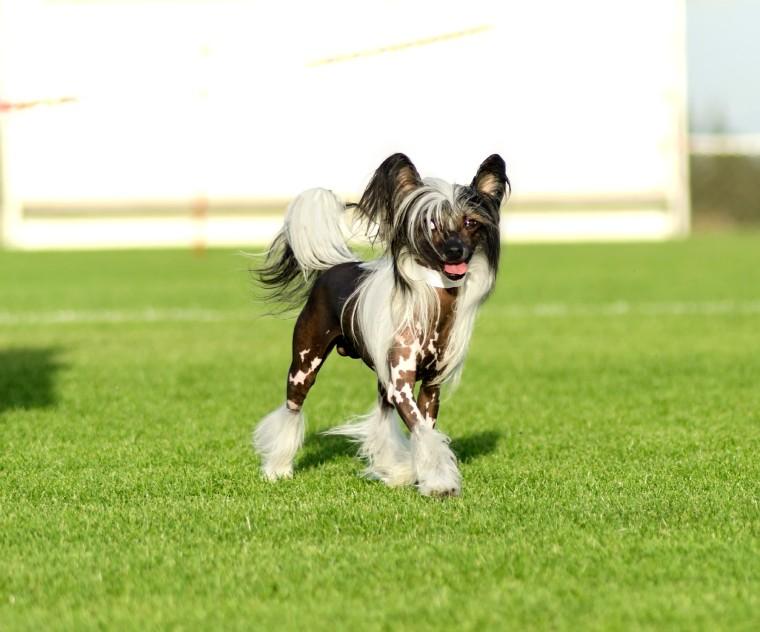 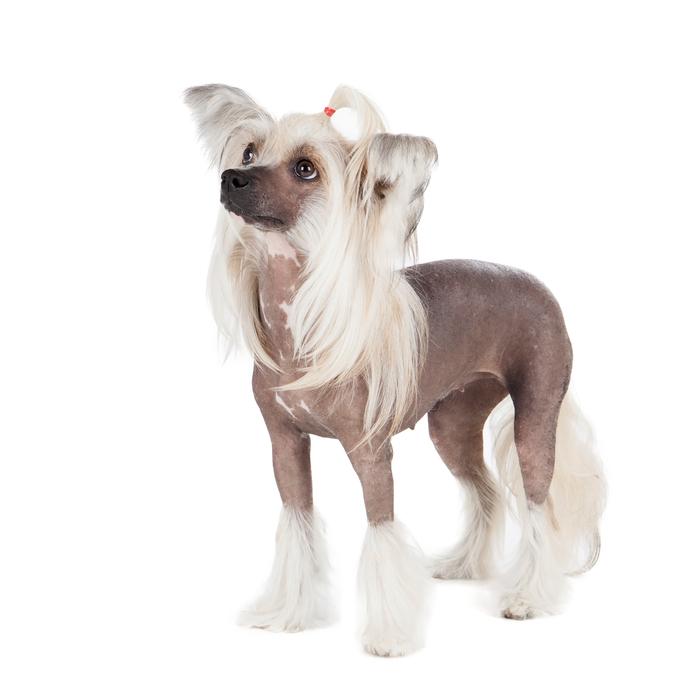 1 of 6
Chinese Crested Dog
Back to top