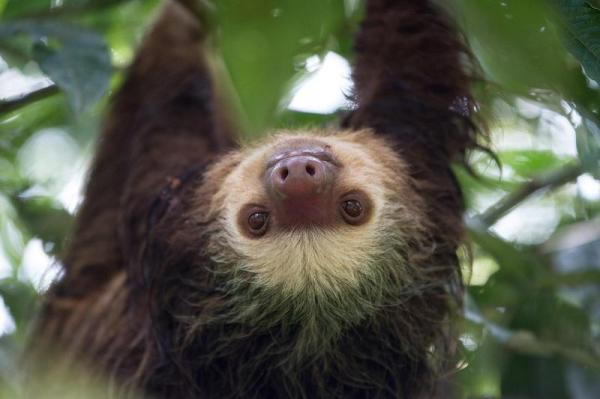 The slow movement of the sloth is where they derive their name, first being used in English in the early 17th century[1]. Since then they have captivated animal lovers across the world. Their slowness also connotes gentleness and it is hard to argue the docile grin they display isn't one of the most endearing faces in the animal kingdom. However, to limit them to a simple and passive creature with little value other than cuteness is to do them a disservice. Sloths are incredibly resourceful creatures which have a unique relationship to their ecosystem. It's a relationship which is being fought hard to maintain thanks to dwindling population numbers.

AnimalWised brings you these interesting sloth facts to help you better understand these animals. Learning about sloths is the first step toward helping them.

You may also be interested in: Fun and Interesting Facts About Turtles
Contents

1. There is no singular sloth

Before we get into some fun facts about sloths, we're starting with the basics. When we talk about ‘sloths’ it is important to know that we are actually talking about a few different animals. We can generally talk about two different types of sloth:

Within these two main types of sloth are six species. The first four on our list are three-toed sloths and the last two are two-toes sloths:

2. Some sloths are covered in algae

The pale-throated sloth has a grayish green coat, but the appearance of their fur is misleading. It is not due to natural pigment, but the result of algae growth on their coat. A rolling stone gathers no moss, but a lolling sloth seems to. Since they move so slowly, algae has time to grow on three-toed sloths without too much disturbance.

Sloths have an undercoat and longer, coarser guard hair. The algae grows on the guard hair in a symbiotic relationship. The algae has somewhere to thrive and the sloth is given a better ability to camouflage in the canopies of the forest. The upper limbs are longer than their lower limbs, using the upper limbs as arms. The three claws on these limbs are perhaps more like fingers than toes, allowing the sloth to climb effectively and stay safe at a height.

3. Sloths have more fight than you think

Despite their slowness, the laziness of the sloth can turn aggressive when they need to. As part of the mating ritual, male sloths will fight within their group to gain dominance and prove themselves as a better mate. The female will observe the entire ritual until, when they consider one of the males to be a winner, they emit a screech to signify the victor.

Another of our fun facts about sloths is about what happens after the males have finished their mating ritual. Once the female has selected a partner, they perform the mating act up in the trees. While it is not often observed in the wild, evidence seems to show that this is more comfortable for them. Sloths may wait up to a day before actually getting down to business, which is pretty extreme foreplay in anyone's book. During this time they may have to fight off other interested males.

5. They are an excellent swimmer

You may have seen videos online of sloths slowly trying to cross a road. They can be seen struggling to cross even the flattest hard surface, especially because they don't have any tree branches to hold onto. However, when in water, a sloth is much more mobile. Having longer forelimbs makes walking tricky, but swimming easy.

Some people believe sloths are so lazy they will sleep 20 hours a day, but this isn't true. They are more likely to sleep around 10 hours a day, the rest of their time spent looking for food or a mate.

6. It is difficult to sex sloths

Zookeepers who tend to the needs of sloths are much more knowledgeable about the animals than most. However, one difficult aspect of their care is that it is difficult to distinguish between male and female sloths. This was something zookeepers at the London Zoo in England found when their 25 year old two-toed sloth Prince failed to mate with his partner Sheila. This is because it turns out Sheila was actually a male[2], making successful mating very difficult. Sheila was replaced with a female known as Marilyn who eventually gave birth in 2018.

7. They are slower than you think

While sloths get their name from being slow, you might not be aware of just how lumbering is their pace. Even when not sleeping, this animal can seem to be moving so slow it is still. A sloth will clock in a paltry 2 m/min on average. When we juxtapose this with the preferred walking speed of humans at 84 m/min, you'll see it is glacial at best.

When on branches, however, sloths can move quicker. Sometimes even up to three m/min!

8. Their diet is based on leaves

We have fairly well established they are slow creatures, but why are sloths so slow? The reason has a lot to do with how they eat. Sloths do not have a varied diet. They are folivores, meaning their are an animal which only feeds on leaves.

After ingesting the leaves, their digestive system gets to work at digesting them completely. This just happens to be a very slow process. As leaves are so low in calories, the sloth needs to economize their energy.

9. They only go to the toilet once a week

This is information which might seem like it fits into the category of weird sloth facts, but is actually makes a lot of sense. Since the digestive system of sloths takes its time, then they don't need to urinate or defecate as much. This has a particular benefit. Like most living things, the sloth has a number of predators in the wild. These include wild cats such as jaguars and oncillas which are also able to climb up the branches of trees. Eagles and snakes are also known to pose a significant threat.

Although many of these predators are able to climb, the sloth is better protected up in the canopy. They are better camouflaged and are a little more agile. On the forest floor, this is not the case. On the ground, their slowness makes them very easy prey. Spending most of their time in the branches and limbs of trees affords them both more protection and better access to their food source.

Since they want to spend as little time as possible on the forest floor, their slow digestion means they can descend only once a week to urinate and defecate. After doing so, they will bury their waste to cover their scent from predators.

10. Sloths are endanger of extinction

Being in danger of extinction is not one of our fun facts about sloths. It is one of those facts about the sloth which is as enraging as it is depressing. While conservation efforts have been made to bring some species back to relative abundance, others are not so fortunate. The maned sloth has declined greatly since the 1990s thanks to deforestation in its native country of Brazil. Sloths are also in danger thanks to poachers. They use their meat for food and their skins for a diverse range of products.

If you want to read similar articles to Interesting Facts About Sloths - Fun Sloth Information, we recommend you visit our Facts about the animal kingdom category.

1 comment
Rating:
Barbara Manchego
09/01/2020
can you make a pet out of a sloth?
Interesting Facts About Sloths - Fun Sloth Information 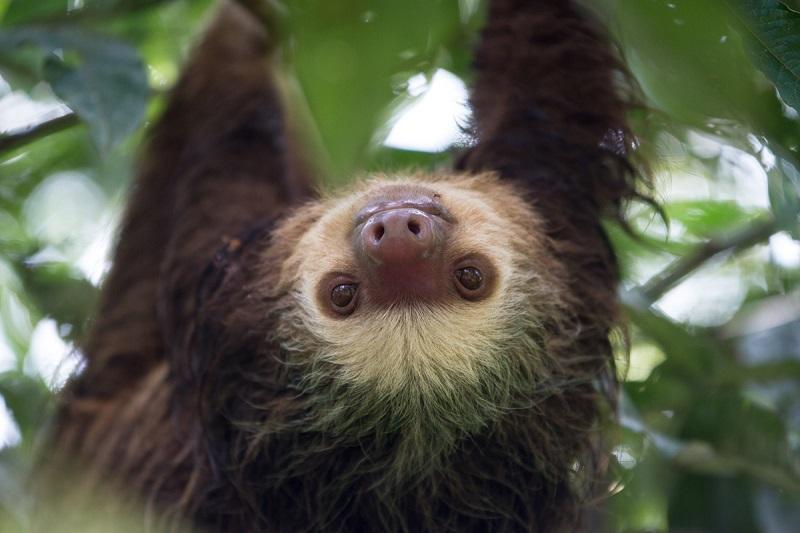 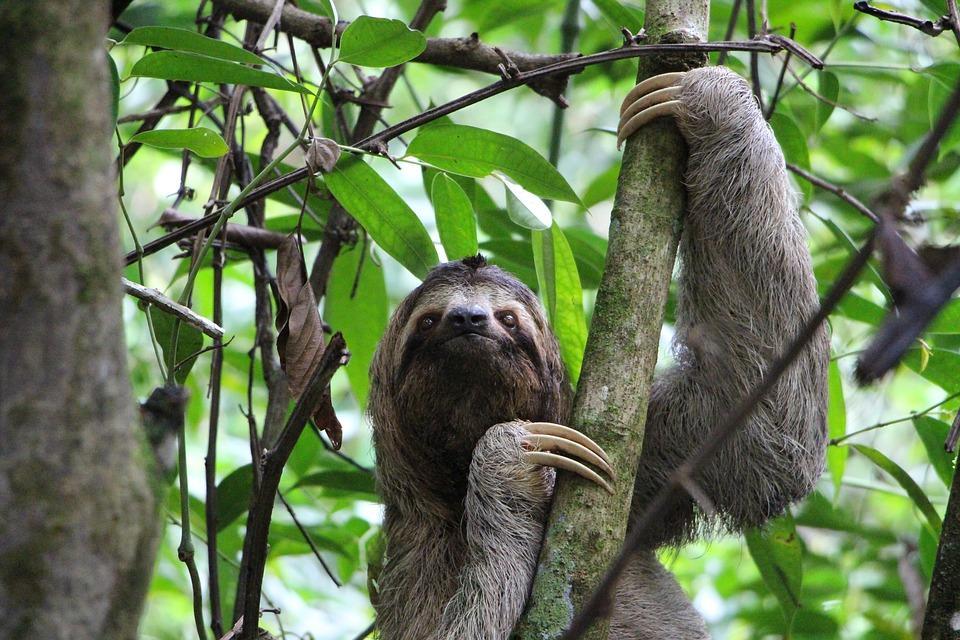 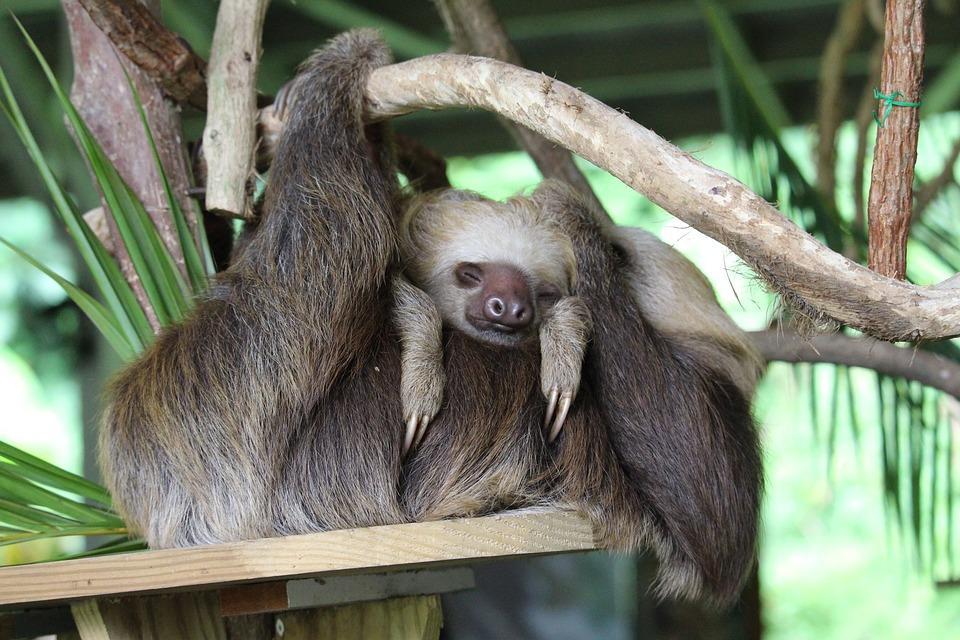 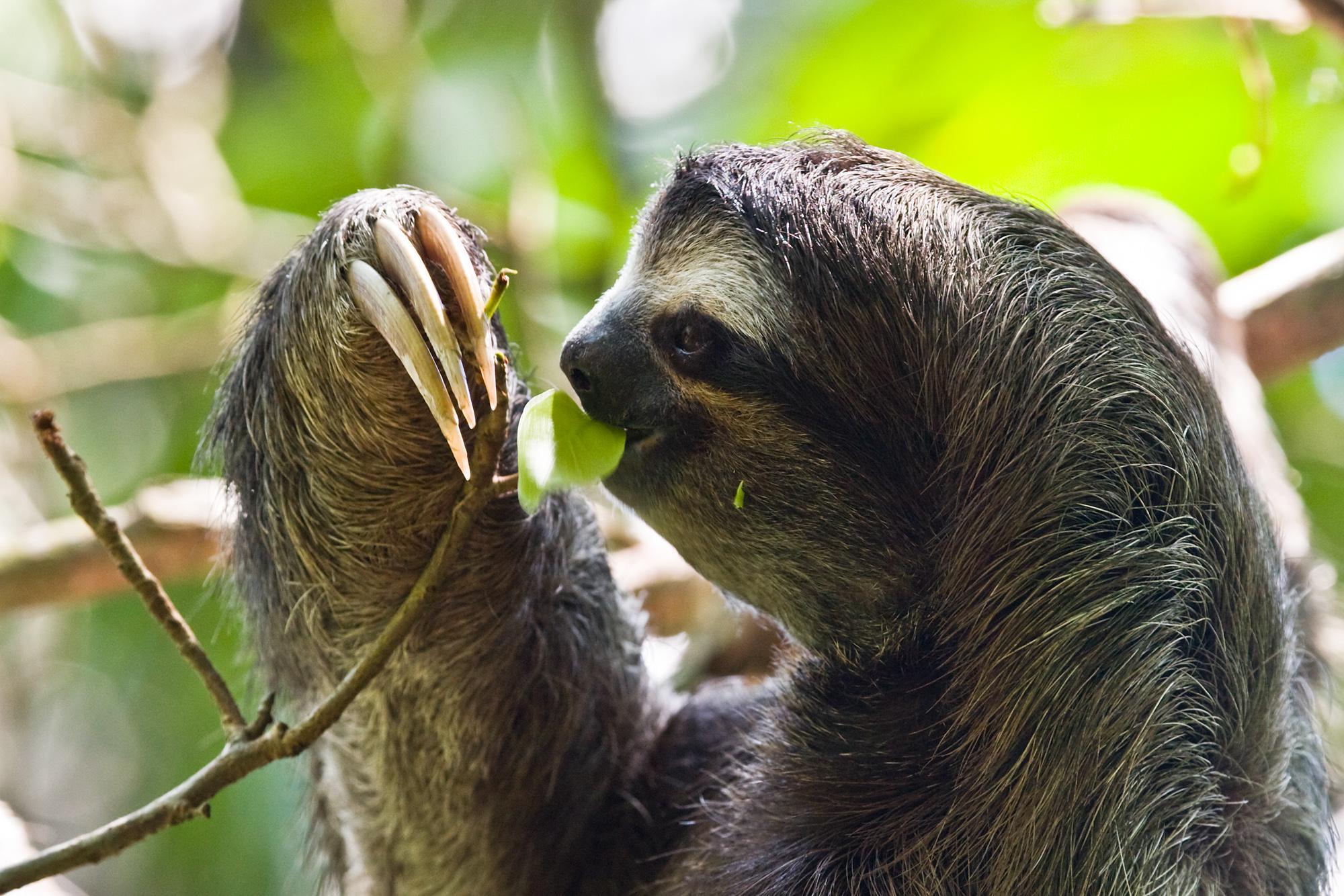 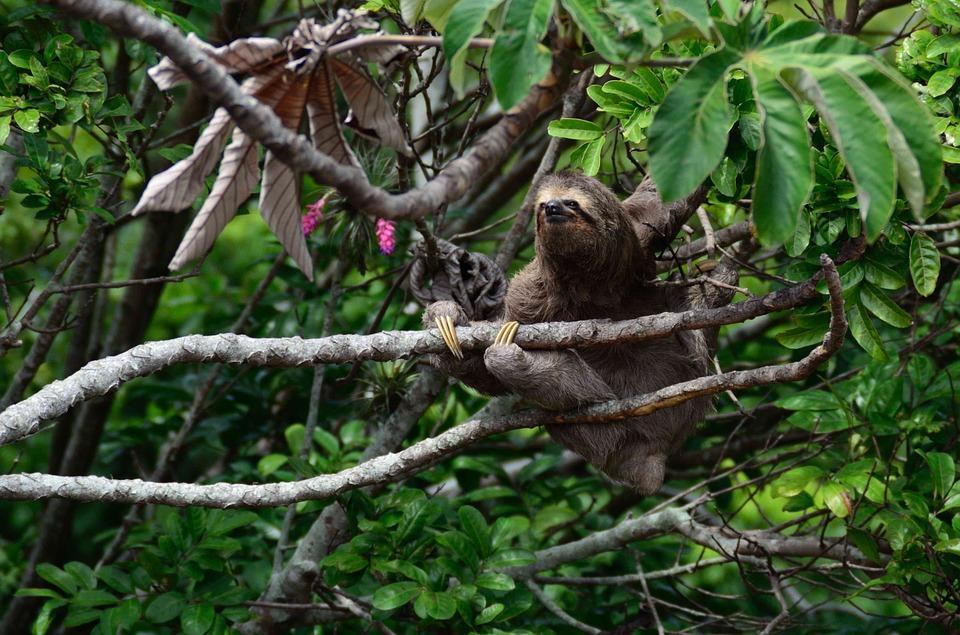 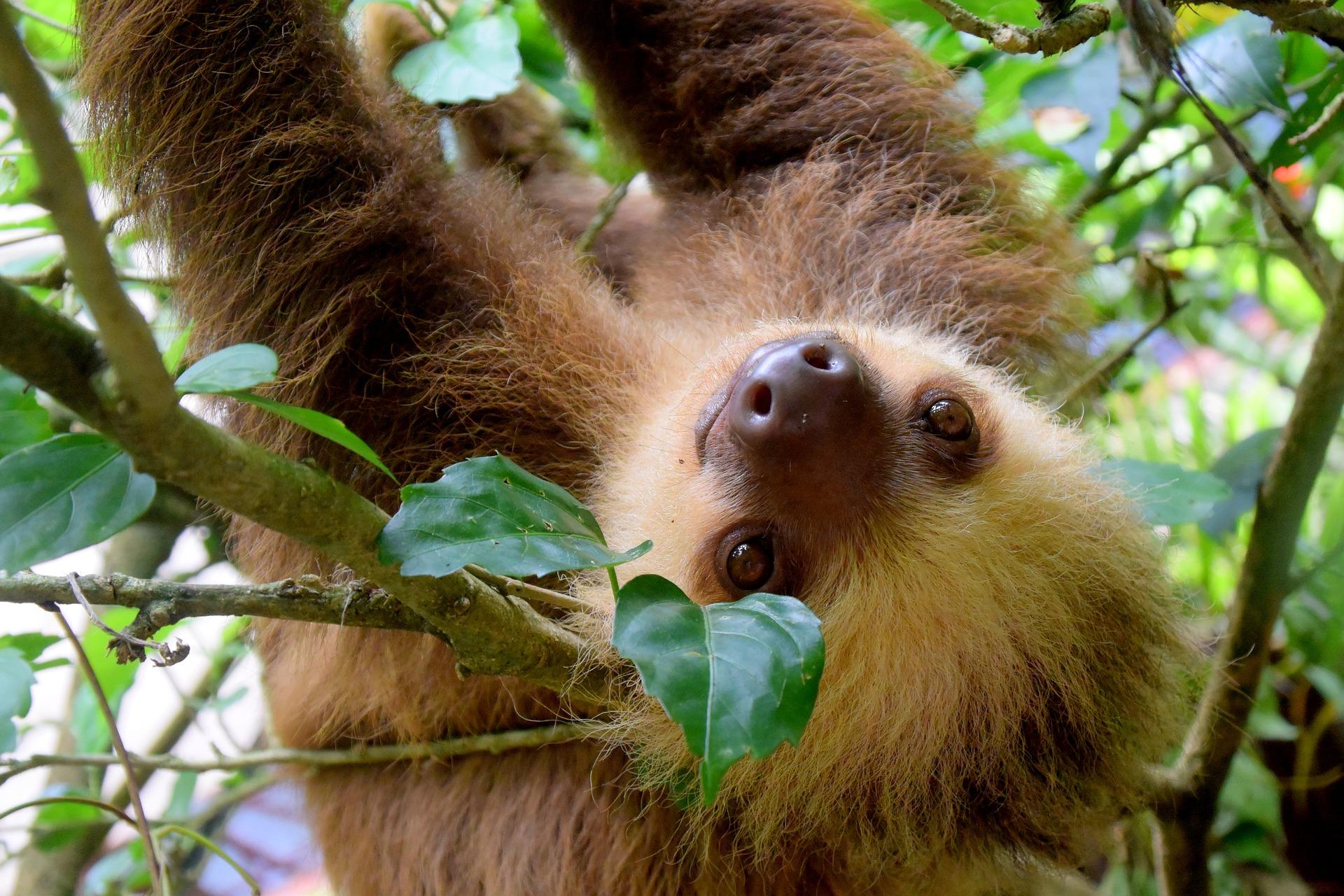