Fun and Interesting Facts About Ants

By Nick A. Romero, Biologist and environmental educator. September 1, 2022

Ants are common insects, but they have some unique characteristics. More than 10,000 ant species are known worldwide. They are especially prevalent in tropical forests, where in some places they can account for up to half of the insect population. Ants are hypersocial insects that usually live in organized communities underground, in mounds at ground level or in trees. Ants are capable of amazing behaviors related to their organization, way of communicating, work distribution, feeding habits and much more.

In the following AnimalWised article, you will learn the 15 most fun and interesting facts about ants.

1. They have great organizational skills

One of the most outstanding characteristics of ants is that they are a group with a great organizational capacity, forming a complex social structure of different individuals with different functions, called eusociality.

Eusocial organisms such as ants, wasps, and bees have a hierarchical social organization system with reproductive queens and sterile workers. This means that many individuals sacrifice their own reproduction to care for the offspring of others.

Their organization consists of queens and males, who are mainly responsible for the reproduction of the colony, and workers, who divide the tasks and specialize in building the nest, caring for the larvae, foraging and protection.

If you want to know something about ants and the different ant species, you should not miss the following article, where we list the 10 most common ant species and also add some pictures and interesting features about each species.

2. Ants are the longest living insects

Unlike some beetles that live only days or even hours, the queen ant of a certain species such as Pogonomyrmex Owyheei can live up to 30 years. Worker ants, on the other hand, have an average life expectancy of about 2 years.

Contrary to what one might think, the queen ant contains the same genetic material as common ants. However, after fertilization, the queen ant becomes a queen, her DNA is altered and her life expectancy multiplies.

If you want to learn more about queen ants and their reproduction, do not miss this other article where we cover ant reproduction.

3. There are flying ants

The main difference between sexuates and workers is the presence of wings. While workers are apterous (wingless) individuals, sexuates have two pairs of wings. These wings allow them to leave the nest and perform what is known as nuptial flight or swarm flight.

The nuptial flight or swarming consists of the sexuates (winged males and females) flying out outside the nest. However, in some ant species, nuptial flight has disappeared because the females, although having wings, have lost the ability to fly.

4. They are a very diverse group

Ants are an extremely diverse group, of which some 358 genera, more than 10,000 species, and about 4,515 subspecies have been identified, with estimates that these numbers are still increasing.

Their number is such that they occupy between 15 and 20% of the terrestrial animal biomass of the planet. As mentioned earlier, ants are particularly common in tropical forests, where they can account for up to half of the insects that live in the area.

5. They smell through the antennae

The chemical communication that takes place in this group is perceived through the antennae. It is through these structures that the ants smell, as they contain receptors for organic chemical compounds that have been identified and named cuticular hydrocarbons. Each individual produces these substances in different parts of the body, which are perceived by the other members of the colony.

6. Each colony has a particular smell

The role of chemical communication is so complex that it has been found that each colony has a characteristic odor due to various aspects such as genetics, physiology, and the diet of the group. Thanks to these factors, a distinctive odor is created that is transmitted from birth through physical contact between individuals, helping them to recognize each other.

Ant nests are far from being simple structures; on the contrary, they are characterized by great complexity. They consist of different tunnels that can be several meters deep, as well as different chambers to store food, take care of the young and house the queen.

Another interesting aspect of ant life is the enormous variety of shapes and materials they use to build their nests, which in some species become anthills of several hundred thousand, perhaps even millions of individuals. Ants build their nests under and inside trees, under stones, in fallen logs and branches, and even in large seeds. Generally, they use soil and plant material to build their nests. However, there are nomadic species that never build permanent nests.

8. They form rafts to float

During floods, some species, such as the red imported fire ant (Solenopsis invicta), have the ability to form rafts that allow them to float for several days until they reach dry land.

This complex, interlocking system protects primarily the queen and larvae. The rest of the workers and males take care of them by staying together on the ground to prevent water from entering, while the workers above leave certain spaces free for oxygen circulation.

9. There are very dangerous ants

Several species of ants can cause significant harm to humans due to their toxins, which can cause severe pain and even serious health problems.

The stings of the jumping ant (Myrmecia pilosula) and the red fire ant (Solenopsis invicta) cause local swelling that lasts for several days, the heart rate increases and blood pressure drops rapidly. Most people feel a sharp pain after these stings, similar to an electric shock. Some patients develop a systemic skin reaction after being stung.

In the case of the bullet ant (Paraponera clavate), some victims have compared the pain of their sting to that of a gunshot, hence the insect's name.

10. They protect the plants where they live

In some cases, ants have developed symbiotic relationships with certain plant species, benefiting both. One of the most fascinating cases of positive interaction in nature is the relationship between plants and ants.

In this relationship, plants generally provide shelter and food for the ants. Ants, on the other hand, defend the plants from herbivores, which may be insects or mammals, and they may even attack plants that shade them or try to stay on their host plant. In other words, ants act as bodyguards in exchange for food and protection.

11. They play an important role in ecosystems

Ants play a key role in ecosystem regeneration. For example, there are species that transport seeds through ant trails, which are granivorous species. These ants help plant species to disperse seeds. It is also common for seeds to remain somewhere in the anthill where they germinate.

They even pollinate some plants, although they are less effective. There are also ants that feed on other organisms, usually invertebrates and even carrion. They are also the food source for a large number of animal groups, from arthropods to amphibians, birds, micromammals, etc.

Another service of ants is the aeration of the soil through the numerous passages that form the anthill. And of course the decomposition of organic material or the transport of nutrients.

12. They have a tiny but complex brain.

Although the ant brain is small, it has high cognitive sophistication. Complex individual behavior is generated and controlled in this mini-brain of less than 0.06 cubic millimeters.

If we compare the brains of ants with those of their social relatives, such as bees and wasps, we see that they are very similar. However, in ants, the eyes and optic nerves (regions that process visual information) are greatly reduced, reflecting the low importance of vision in the life of ants.

13. They bury their dead

Surely you have noticed that when an ant dies or is killed, other ants run off to find the carcass and take it with them. This process is called necrophoresis and consists of removing the carcasses of their dead conspecifics to keep the ant's burrow clean.

To avoid infections or diseases caused by the decomposition of the bodies, the ants are forced to bury the dead conspecifics far away from the anthill.

14. They communicate in different ways

Many species of ants can communicate with sounds; adult ants make sounds by clicking their mandibles, while larvae and pupae make the same sound, but with less intensity because their mandibles are weaker. This sound can serve as a call for help with a task or as a distress call.

Ants can communicate with their antennae, which are one of their most sensitive organs and are used to detect and recognize different types of pheromones. These pheromones are used to identify a specific location, identify an ant's function, mark an ant's function, mark previously explored trails, or signal a dangerous or food, among other things. They are even used to determine if an ant belongs to another colony, so that no ant can produce the same pheromones as another.

15. They live almost everywhere in the world

Ants are found on all continents except Antarctica and on some large islands such as Greenland, Iceland, and Polynesia. They occupy a wide variety of ecological niches, ranging from nomadism to the construction of simple and complex colonies.

If you want to read similar articles to Fun and Interesting Facts About Ants, we recommend you visit our Facts about the animal kingdom category.

Fun and Interesting Facts About Ants 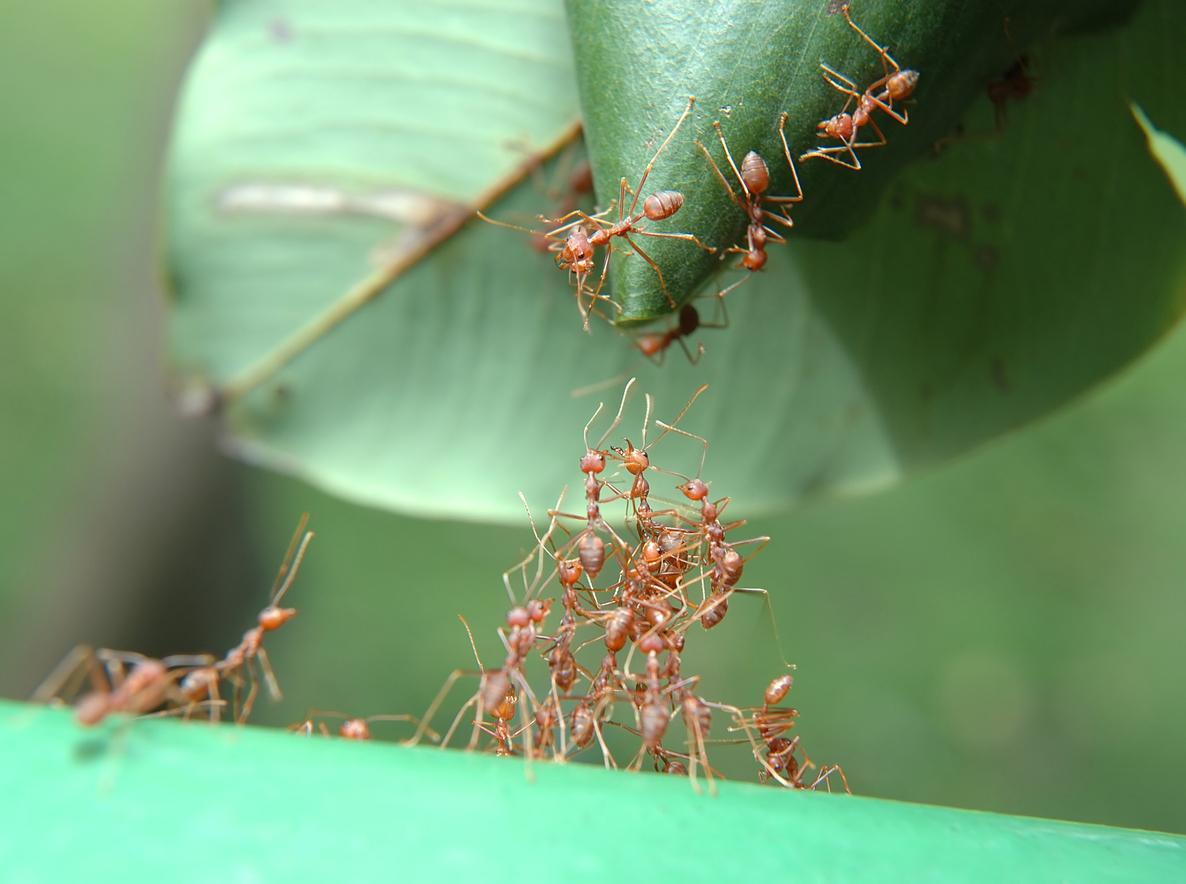 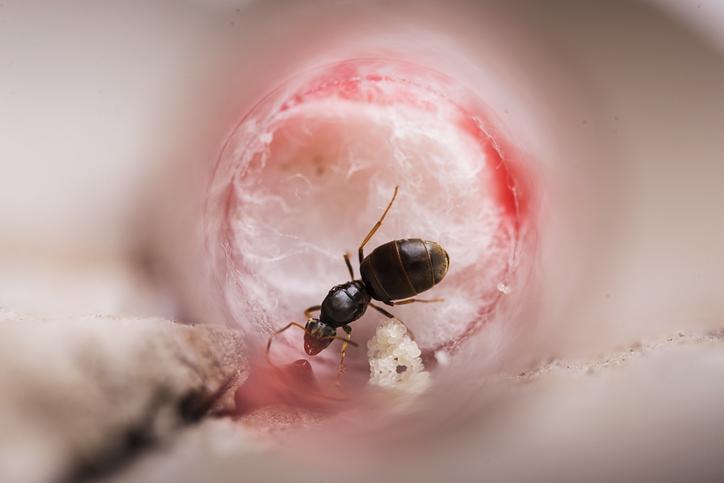 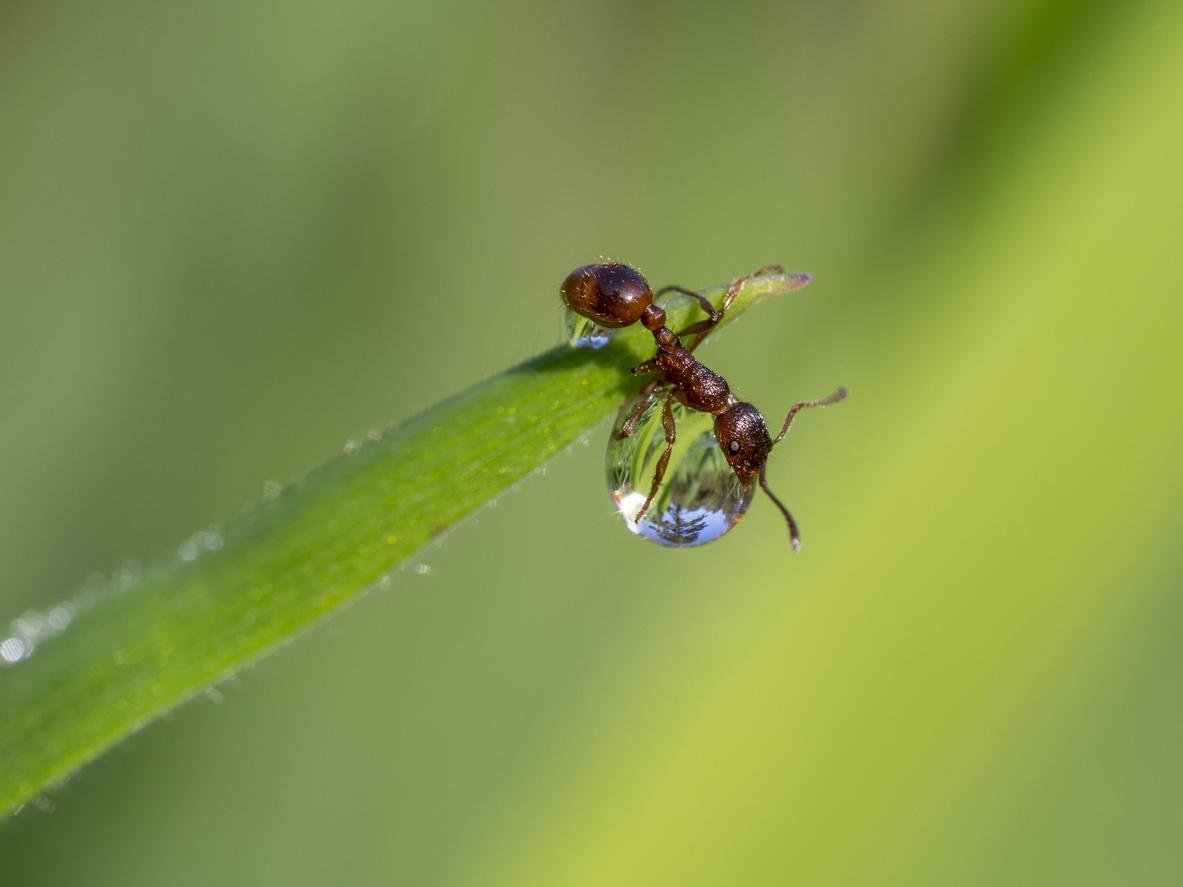 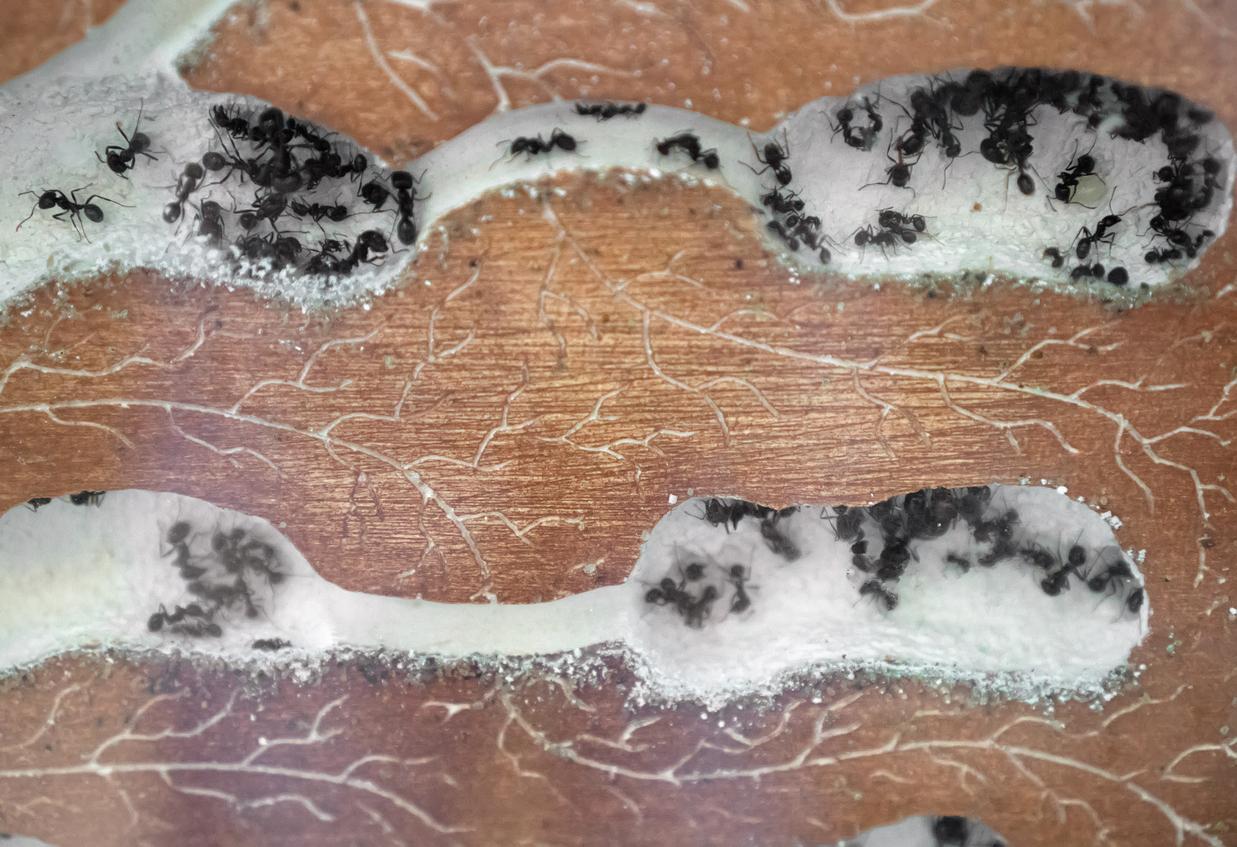 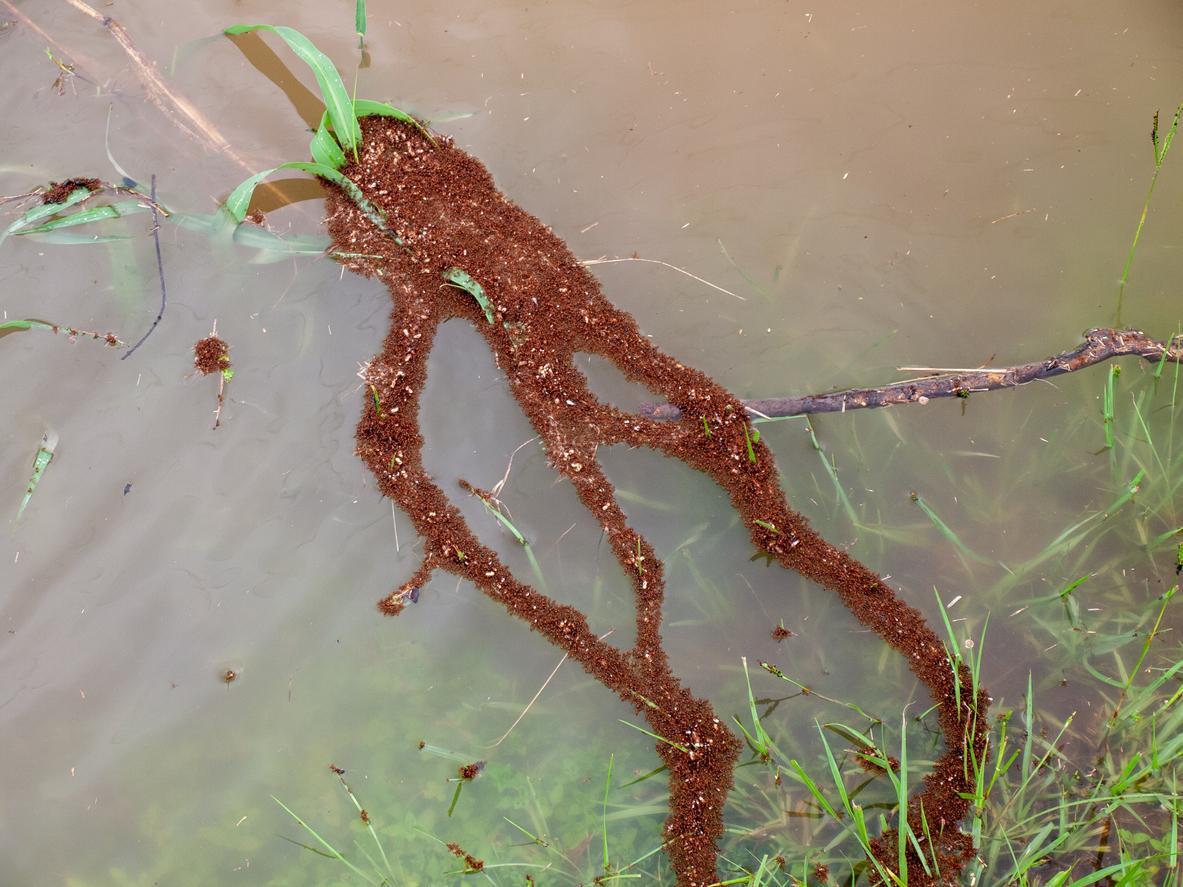 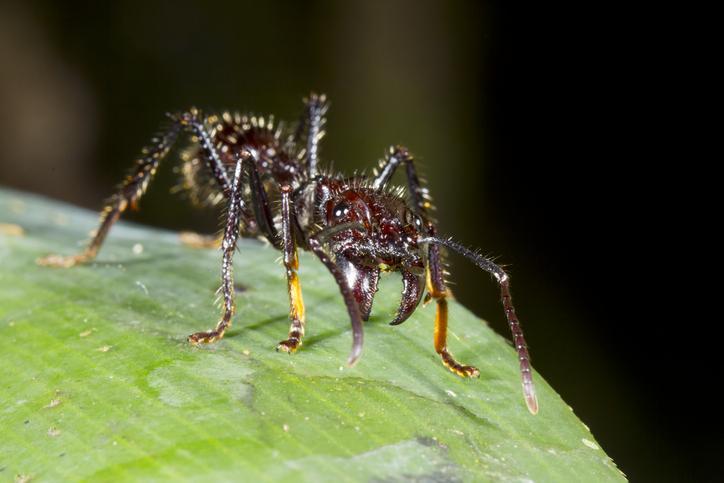 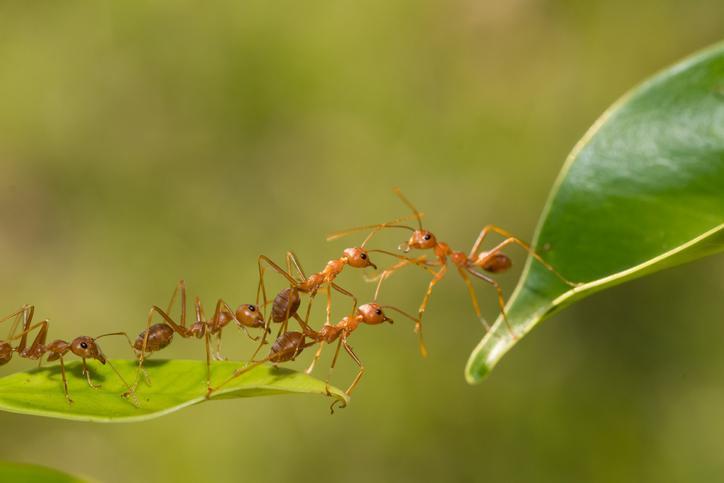