By Nick A. Romero, Biologist and environmental educator. Updated: October 2, 2022

We associate the Mediterranean Sea with some of the most beautiful, accessible and safe beaches in the world. We don't always associate it with sharks. While it is true many shark species live in tropical regions and coral reefs, they can also live in environments as far reaching as the Arctic. With such a wide habitat distribution, it shouldn't be a surprise that we can find sharks in the Mediterranean Sea. Which shark species we are likely to fins will vary since sharks can migrate depending on the time of year and temperature.

At AnimalWised, we provide a list of sharks in the Mediterranean Sea. We look at 20 Mediterranean shark species and discover more detail about their characteristics and behaviors. We also show you photos of these sharks so you can see what they look like.

Are there sharks in the Mediterranean?

Sharks are a type of fish that is located in the chondrichthyan class, meaning that all sharks are cartilaginous fish. This is because their skeletal system is mainly made up of cartilage. As we have stated in the introduction, there are indeed sharks to be found in the Mediterranean Sea. Not only can we find sharks in the Mediterranean, but you may be surprised at the diversity of shark species found in these waters.

It is common for many people to fear sharks. As many are equipped with razor-sharp teeth and are extremely agile in the water, we should certainly be careful if we approach one in the waters. However, sharks do not usually consider humans a food source. Most shark attacks occur other because the fish was provoked or because they mistook a person for their usual prey.

Some sharks are very docile. Although they are the largest fish species on the planet, the whale shark poses no danger to humans. They will often even let them be towed along through the water, although we don't encourage this practice in the wild.

Unfortunately, many sharks are currently included on the International Union for the Conservation of Nature (IUCN) Red List of Threatened Species. This is in most cases due to human interference in natural habitats such as overfishing, pollution and climate change. Unfortunately, some are so vulnerable, we may not see these sharks in the Mediterranean Sea for much longer.

Where are there sharks in the Mediterranean?

Sharks are animals with a wide habitat distribution, although how wide depends on the shark species and other factors. Many have such large distribution ranges that they are considered cosmopolitan animal species. These animals commonly remain in a state of constant mobilization, with migratory behaviors that result in travelling long distances. Learn more about migration with our list of animals with migratory habits.

This shark species has a wide distribution, but has had reported sightings in the Mediterranean Sea. They usually weigh up to 400 lb in females, although males are considerably smaller. They develop in both coastal and open waters, in temperatures generally between 12-20 ºC/53-68 ºF. It is classified as near threatened.

The basking shark is distributed at different depths with a varied distribution, but they generally seek cold waters of between 8-14 ºC/46-64 ºF. They are one of the largest sharks to be found in the Mediterranean with a weight of over 3.9 tons and measuring up to 11 m/36'. It is considered in danger of extinction.

Learn more about big fish with our article on the largest sharks in the world.

Although they can live in warm waters, they to move towards colder waters. They tend to stay on the continental shelf or up to 20 miles from the coast. They measure 1.6 m (5') on average and weigh about 750 lb. It is classified as vulnerable.

The shortfin mako shark is a species of shark from the Mediterranean, but can inhabit many other regions. They have high mobilization and mainly pelagic habits. This means they are generally found in open waters with depths that can reach up to 900 m/3000'. The average weight is about 11 kg/24 lb and the length is 3.5 m/11.5'. It is classified in the endangered category.

Also known as the sandy dogfish, this species lives on the continental shelf on muddy or rocky bottoms. These can reach depths of over 400 m/1300'. It is a small shark, compared to the previous Mediterranean shark species, weighing around 2 kg/4.5 lb and measuring 1 m/3.2'. It is considered to be of least concern.

This species is also cosmopolitan and located in temperate, cold and warm waters. It is one of the most common types of Mediterranean sharks where it is popular as seafood, particularly in Andalusian cuisine. It grows up to 2 m /6.4' in length and is distributed from coastal waters to about 800 m/2600' deep. However, it commonly lives in depths of around 200 m/650'. It is classified as critically endangered.

You may be surprised to hear there are great white sharks in the Mediterranean, but it is tue. They can be found in temperate and tropical waters, but prefers the former. They can be found both in costal regions and the high seas, but most commonly prefer deep waters of around 1800 m/5900'. Although believed to be once very common in Mediterranean waters, their sightings are now rare.

Learn more about his Mediterranean shark species with our article on the world's strongest animals.

The spiny dogfish lives in temperate waters, including areas of the Mediterranean Sea. The spiny dogfish can be found in some coastal, estuarine and offshore areas up to about 2,000 m/6500' deep, although most are located less than 600 m/2000'. The maximum sizes do not usually exceed 2 m/6.4' in length and the weight can range from 3-9 kg/6.6-20 lb. It is classified as vulnerable.

This shark has a global, but a patchy distribution. Despite being one of the sharks that inhabit the Mediterranean, large population declines have been reported. They can be found in warm and temperate waters, generally at depths between 30-700 m/100-2300'.

They generally develop on the continental or insular platform, on muddy or clayey bottoms, at depths ranging from 200-500 m/650-1600'. It is a small shark species that does not usually exceed 45 cm/18' in length, although it can reach up to 60 cm/23.5'. It is classified in the vulnerable category.

Now that you know the types of Mediterranean sharks, keep expanding your shark knowledge with our article on how sharks reproduce. 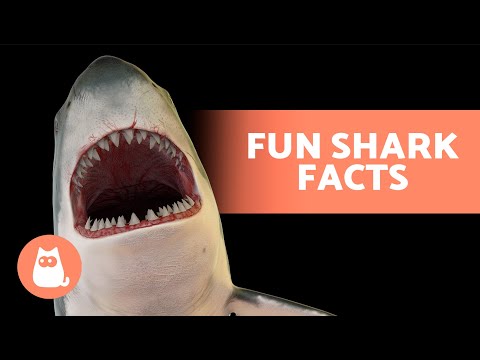 If you want to read similar articles to Sharks in the Mediterranean Sea, we recommend you visit our Facts about the animal kingdom category. 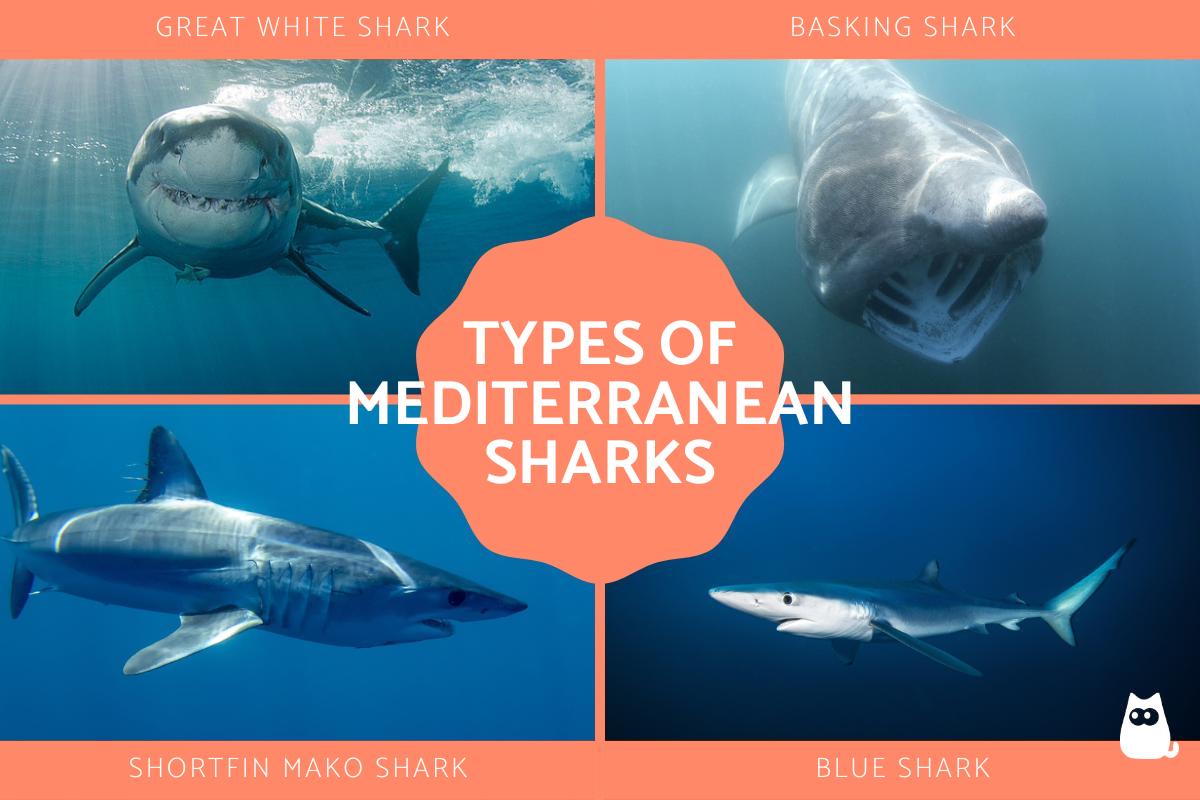 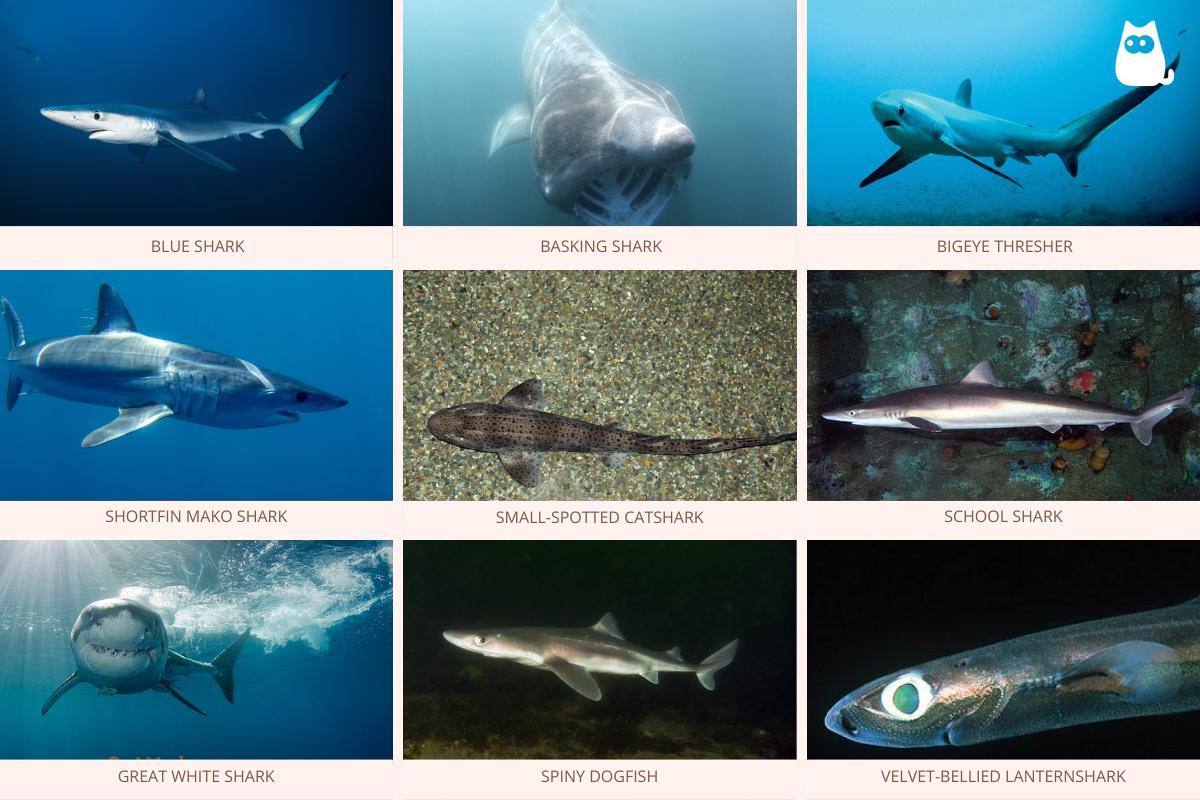 1 of 2
Sharks in the Mediterranean Sea
Back to top