The Difference Between Swallows, Swifts and Martins

When winter ends, many African birds migrate to the Northern hemisphere. Their arrival announces the onset of spring. Among them are different species of small birds with black and white plumage. They are often easy to notice since they make quite a lot of noise as their collective tweeting fills the skies. Since they have adapted to a similar diet, many bird species also exhibit very similar behavior. For this reason, many people confuse some birds with another.

Once you look at their appearance, flight and nesting behavior, you will see it is easy enough to distinguish between them. This is why AnimalWised looks into the difference between swallows, sifts and martins. We also provide some photos of each so you can compare them better.

You may also be interested in: Swallow Bird Migration - How, Why, and Where Do Swallows Migrate?
Contents

As we stated in the introduction, swallows, swifts and martins are often mistaken for each other. Part of the reason is that these are three types of bird which are some of the most common in Europe (during part of the year). For this reason, we look at the most common types of these three species:

Swallows and swifts are migratory birds which specialize in catching insects as they fly. For this reason, both groups of birds have very long wings, short legs, a wide mouth and a small beak. During the flight, their body shape can be similar, as well as their behavior. However, as we will see, the difference between a swallow and a swift is quite clear. Although both birds, they are not closely related taxonomically.

Swallows are passerines, meaning they belong to the Passeriformes order. These birds are often known as types of songbirds, although there are many types of singing birds. They are generally small in size and have certain shared characteristics. However, even within the Passerifromes order, there is great variety in terms of appearance and behavior. Being part of this order, swallows are actually more similar to sparrows than swifts.

Within the passerines, we find the Hirundinidae family, which contains three main types of bird: swallows, martins and saw-wings. In both groups there are a large number of species, so we are going to focus on the most common: the barn swallow (Hirundo rustica) and the common house martin (Delichon urbicum).

As for the swifts, they are part of the order Apodiformes, which literally means ‘without legs’ or ‘footless’. It is a group of birds which are extremely well adapted to flight. Every year they spend 10 months in the air without landing, being about to shut down half their brain to ‘sleep’ while they fly. Within this order, swifts form the Apodidae family and are more closely related to hummingbirds than to swallows. The most common species is the common swift (Apus apus).

How to differentiate between swifts, swallows and martins

Up close, the difference between a swallow and a swift is obvious. The common swift has a uniform, blackish-brown color on their plumage, with the exception of white feathers on their throat. Their tail is short and forked and their legs are feathered. These end in 4 claws, which are in a forward direction. This means they cannot rest on the ground, nor on cables or ropes. For this reason, the swift is one of those few birds whose chicks must be collected when they fall from the nest.

As for swallows and martins, their plumage is black with a white underbelly. Their legs are slightly longer and are not covered with feathers. In addition, although they also have 4 digits, 3 of them are directed forward and 1 back. This allows them to perch on the ground and on cables, where it is very common to see them forming large groups. We explain more in this article on different types of bird feet.

Other than the above similarities, swallows and martins are quite different. The barn swallow has blue highlights on their back, while their forehead and throat are orange. The common house martin, they have a white throat, a more rounded appearance and no blue highlights. The swallow's tail is also extremely forked and its two ends are very elongated to form a large V-shape.

Swallows, martins and swifts in flight

Noticing the difference between these birds in flight is a little more complex. It is one of the main reasons why it is difficult to tell the difference between a swift, a swallow and a martin. Swifts fly faster, higher, and more linearly than swallows. They also emit a short, monotonous screech when flying. They can also be differentiated by their crossbow shape, with their thin wings being the string shape. Their tail is slightly forked, more closed than that of martins and shorter than that of swallows.

Swallows, for their part, differ from swifts by flying slower and lower than swifts. They are also known for performing a large number of maneuvers and acrobatics. Their singing is more musical and is made up of a series of chirps and trills. As for their appearance in flight, they differ from the swift thanks to their white belly. However, we often cannot see their belly up high, so we can tell the difference better by their tails.

The tails of martins is also forked, but more open than that of swifts. In addition, common house martins have a more ‘plump’ appearance than swallows, while swallows have a more streamlined appearance. House martins do not have the same characteristic ‘V’.

If you have found a baby swallow, house martin or swift, we encourage you to read this other article on what to do when you find an injured bird.

Nesting is another important difference between swallow and swifts. The species of the Hirundinidae family build their nest adhering to the walls and roofs of buildings, but this is not theit is different in airplanes and swallows. Swifts, however, nest within gaps in buildings , usually in older buildings. To fully appreciate the difference, let's take a closer look at it.

When spring comes, the pairs of swallow mates get together and begin to build their nest. To do this, they collect mud and form small balls. Little by little, they adhere the clay-like substance they create to the wall or roof of a building. It is a fascinating piece of architectural work. The barn swallow's nest is cup-shaped and usually located under cover. As their name suggests, they would often attach themselves to barns when available.

The martin's nest is shaped as a closed hemisphere with a small entrance at the top. Both species often reuse nests from previous years and often reunite with other pairs to form colonies. Martin nests are usually larger and more compact, resembling our townhouses.

Swift nests are also usually located in human constructions, although in spaces within the roofs and other parts rather than attached to walls. Some pairs, however, prefer to nest on slopes, cliffs and even the cavities of trees.

The construction of the swift nest also begins in spring. The couple, very faithful to monogamy, spend a lot of time collecting plant matter. With it, with feathers and saliva, build a kind of cup in the lower part of the chosen hole . There, the pair will lay their eggs and return each spring to rebuild the nest.

Now that you can tell the difference between swifts, swallows and martins, you might be encouraged to see what other type of wild birds you can see in your environment. It is important to note that these birds are not suitable to be kept as pets and should never be trapped. If you do want to adopt a bird, take a look at this article on the different types of pet birds which might be suitable for you.

If you want to read similar articles to The Difference Between Swallows, Swifts and Martins, we recommend you visit our Facts about the animal kingdom category.

The Difference Between Swallows, Swifts and Martins 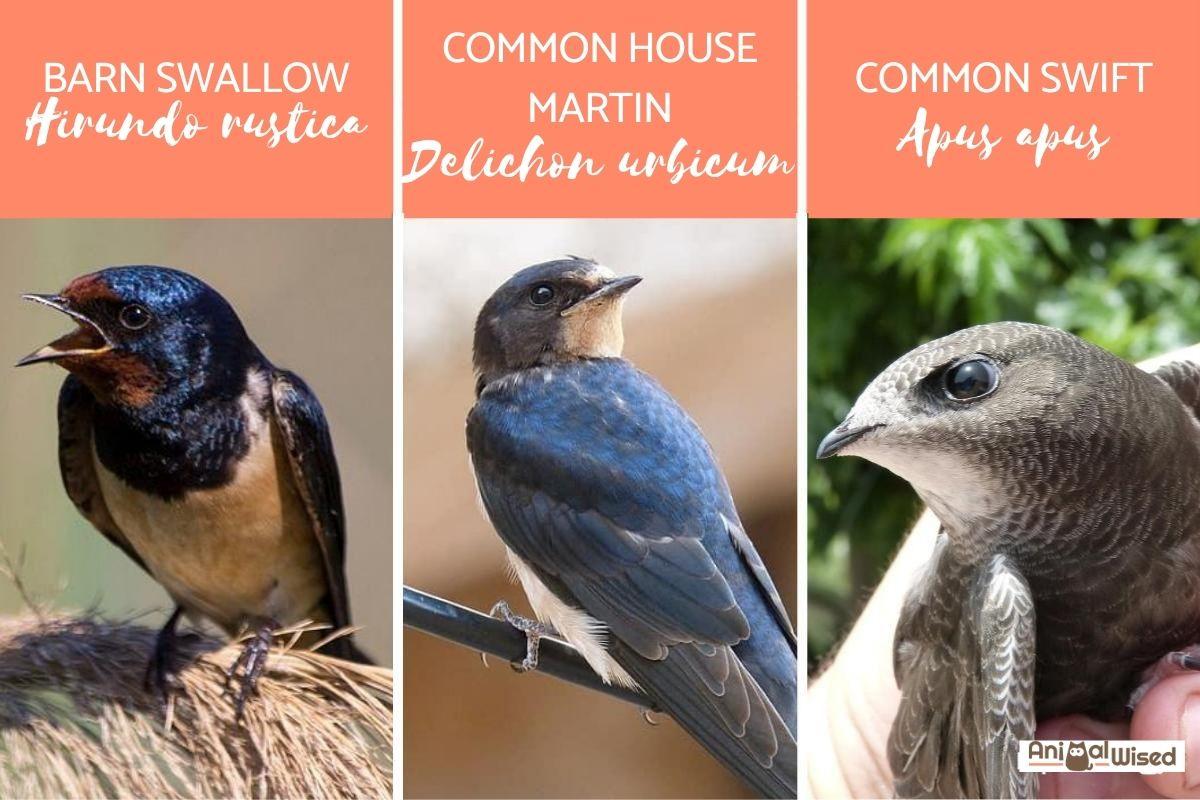 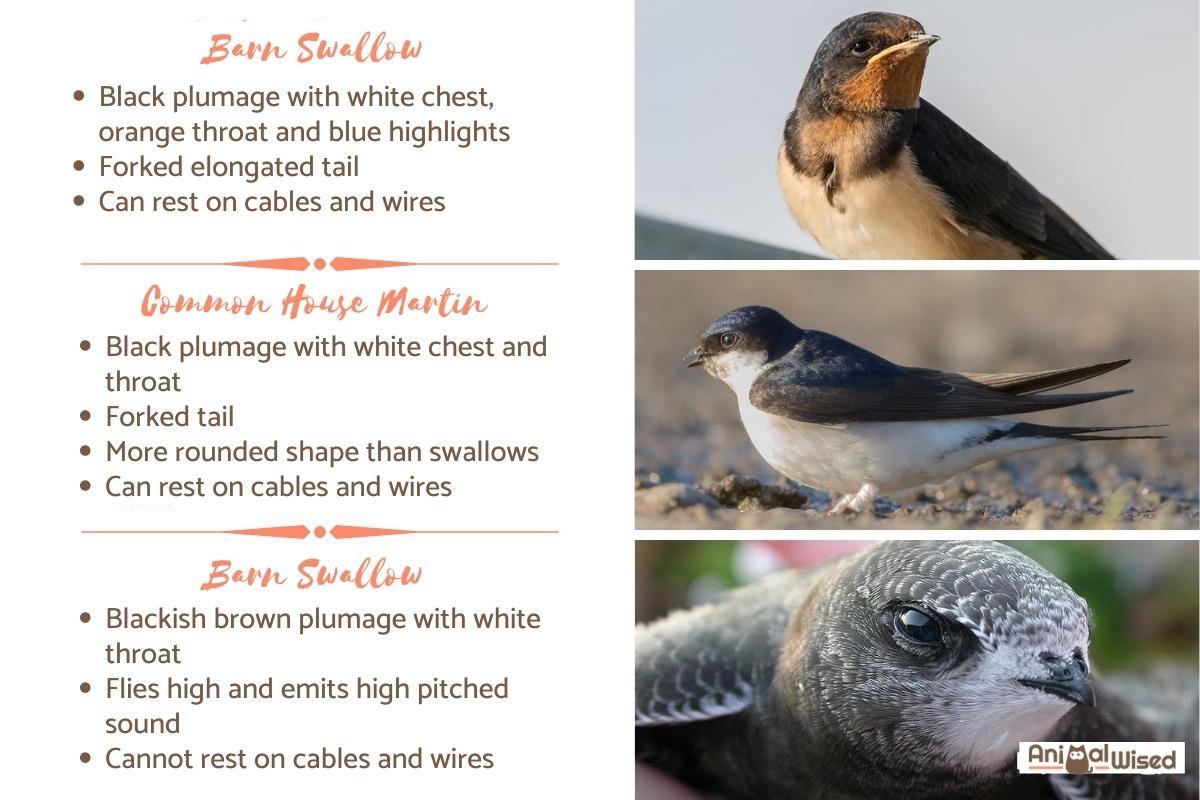 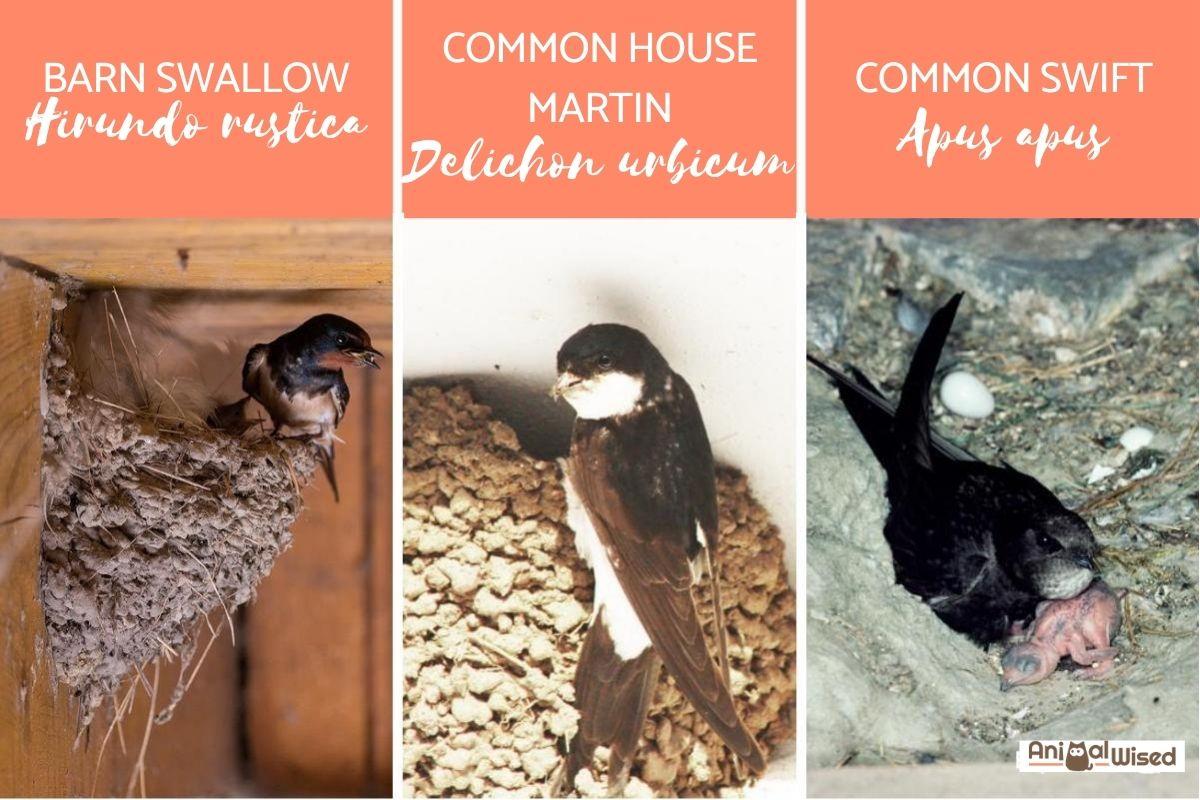 1 of 3
The Difference Between Swallows, Swifts and Martins
Back to top