Along with barbets, toucans make up the birds found in the Ramphastidae family, itself belonging to the order Piciformes. Toucans are arboreal and inhabit the forests of the Americas with a habitat ranging from Mexico to Argentina. Toucans are very intelligent birds, but they are particularly noted for their physical appearance. This is due to their vibrant plumage colorations and characteristically long beaks.

The best known toucan is the largest, a bird known as the toco toucan (Ramphasto toco). However, there are more than 40 species of Toucan to be found. In this AnimalWised article on types of toucans, we reveal what are the different toucan species, as well as their characteristics and photos of what they look like.

You may also be interested in: Types of Birds With Long Beaks
Contents

Characteristics of different types of toucans

All types of toucans that exist have a series of characters that allows their grouping within the same taxonomic group. The common characteristics of toucans include the following:

Toucans are not the only bird with an elongated beak. Take a look at our related article to find out the different types of birds with long beaks.

This size grouping is loose and does not affect their taxonomic ordering. According to modern classification, there are five genera of toucan:

Green toucanets (Aulacorhynchus) are distributed throughout the humid forests of the Neotropics, from southern Mexico to Bolivia. They are small, green types toucans that are between 30 and 40 cm long and have a long, stepped tail. Their bill is usually black, white, yellow or reddish.

The different species of toucanets present variations in color, size, bill shape and vocalizations. The following are some examples:

If you want to know about other types of small birds, take a look at our guide to the different types of hummingbirds.

Dichromatic toucanets (Selenidera) inhabit the forests of the northern half of South America. They are characterized by having a dark black beak with white or, sometimes, gray tones. As in the previous group, its size is between 30 and 40 cm, making them part of the small toucanet group.

These jungle animals are markedly sexually dimorphic animals. Males have a black throat and chest, while females have a brown chest and a slightly shorter bill. In some species, males have a red and yellow stripe that starts from the orbital area, while the females do not have this feature.

Among the species of dicrhomatic toucanets, we find the following:

As their name suggests, mountain toucans (Andigena) are distributed in the humid forests of mountain ranges. Specifically, they are found in the Andes mountain range of western South America. They are characterized by having very striking and varied colors, both in their plumage and on the beak. THey measure between 40 and 55 cm in length.

These are some examples of mountain toucans:

And if these toucans seem striking to you, we encourage you to read this other article about the most exotic animals in the world.

Aracari (Pteroglossus) live in the forests of the Neotropics or tropical zone of America. They mainly inhabit the basins of the Amazon and Orinoco rivers.

The size of these Amazon animals is around 40 cm in length. With the exception of the saffron toucanet (P. bailloni), they have black or dark back plumage, while the belly is colorful and often covered with horizontal stripes. The beak measures around 10 cm in length and is usually yellow and black.

Birds of the genus Ramphastos are the best known toucans and they bear the mononym of toucan. Of all the types of toucan that exist, these are the largest and have the most striking beaks. They also have a very wide distribution, from Mexico to Argentina.

These jungle animals measure between 45 and 65 cm in length and their beak can reach 20 cm. As for its plumage, it is very varied in coloration, although the back and wings are usually dark, while the belly is lighter or brighter.

Here are some examples of toucans:

If you want to read similar articles to Types of Toucans - Different Toucan Species, we recommend you visit our Facts about the animal kingdom category. 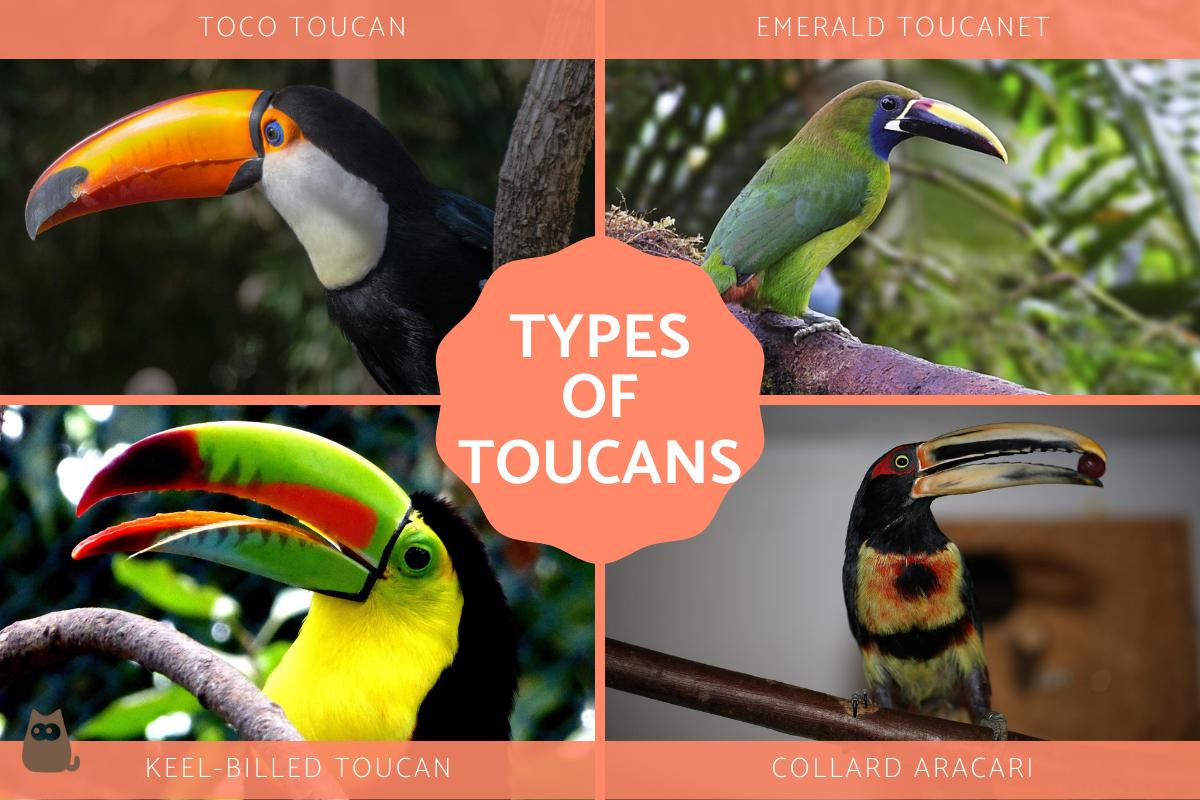 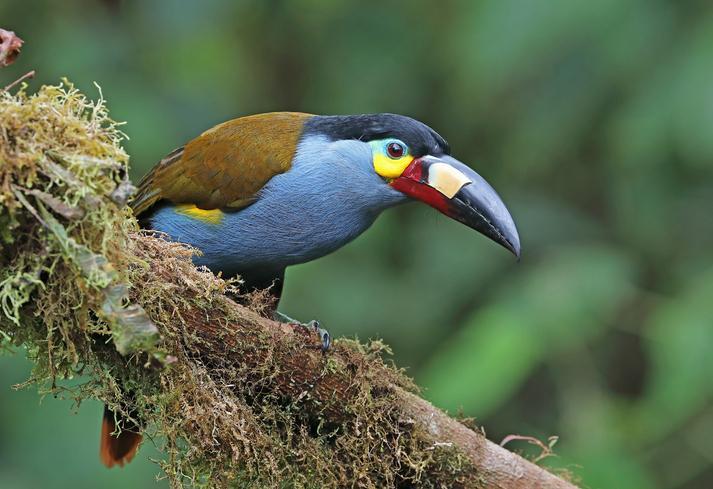 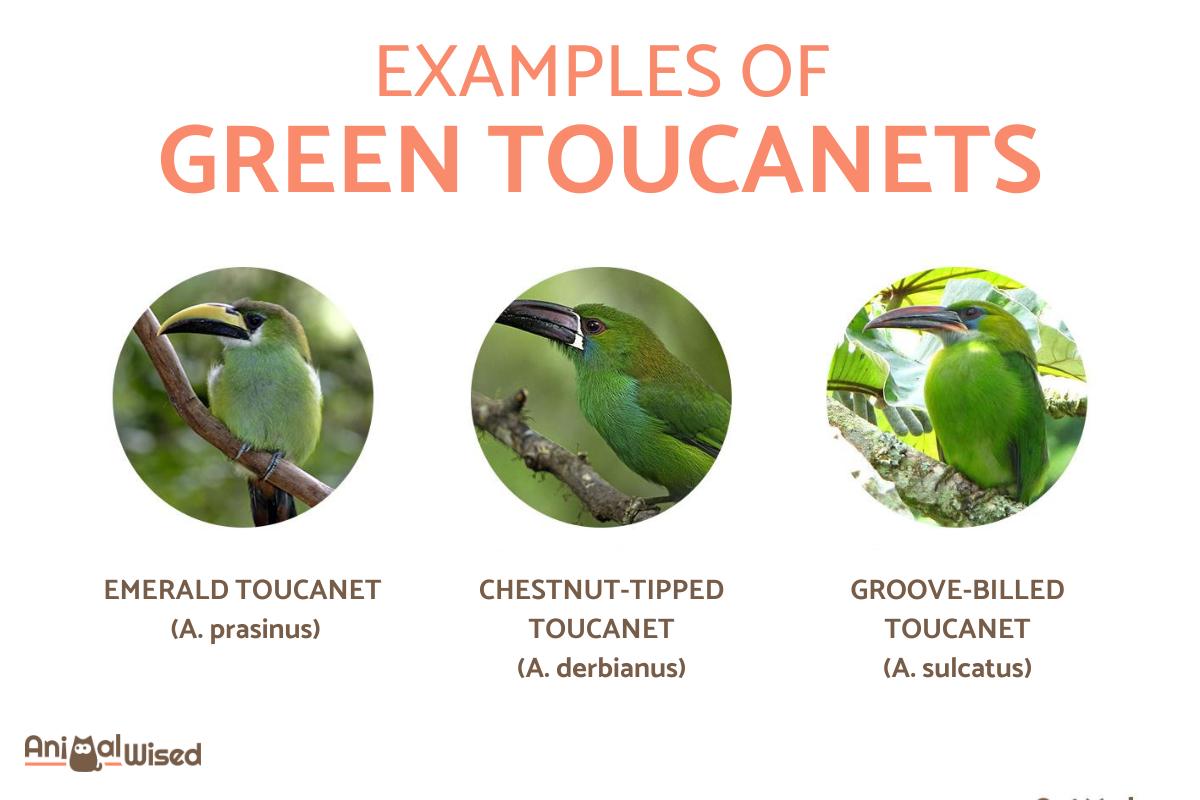 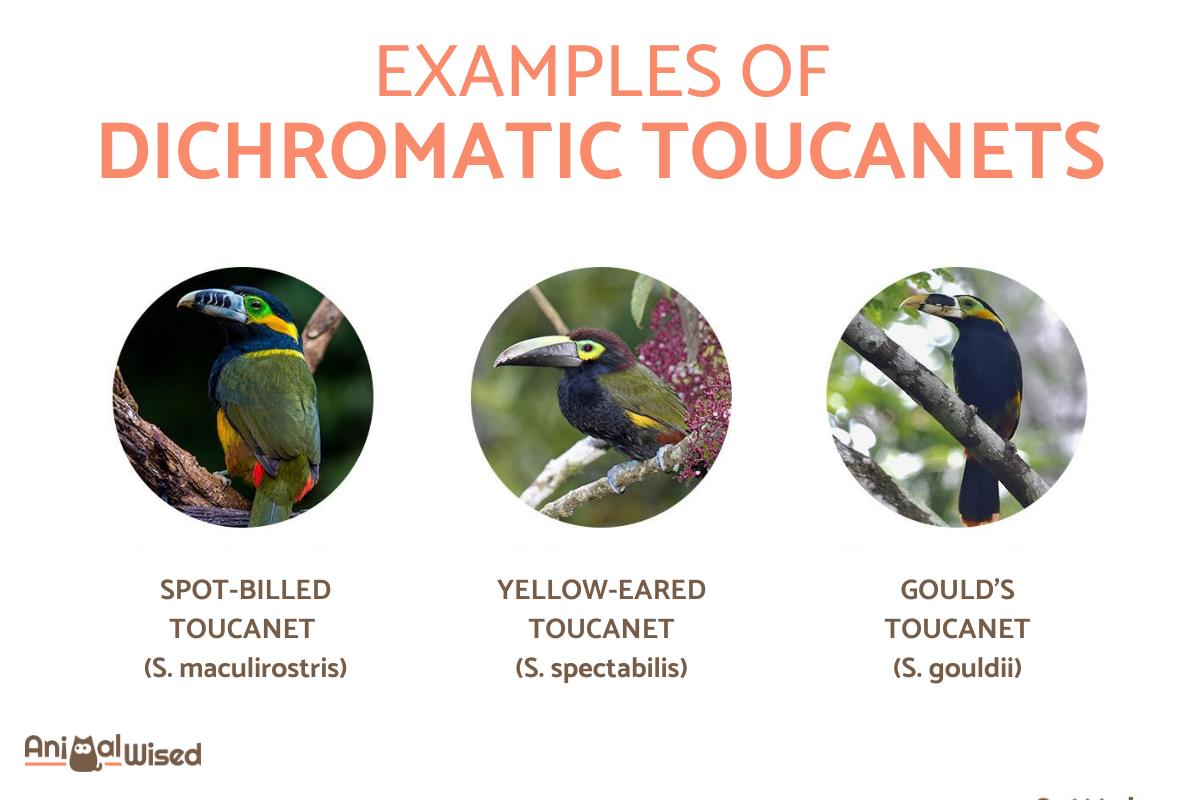 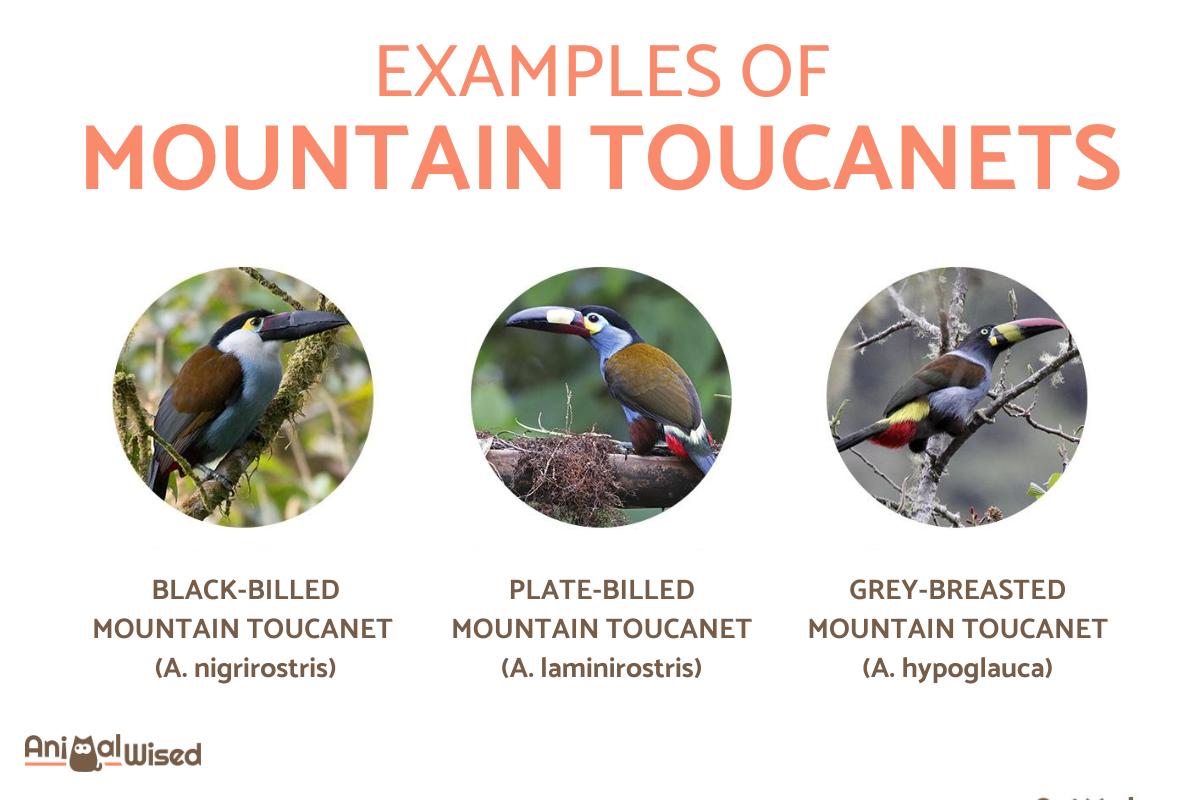 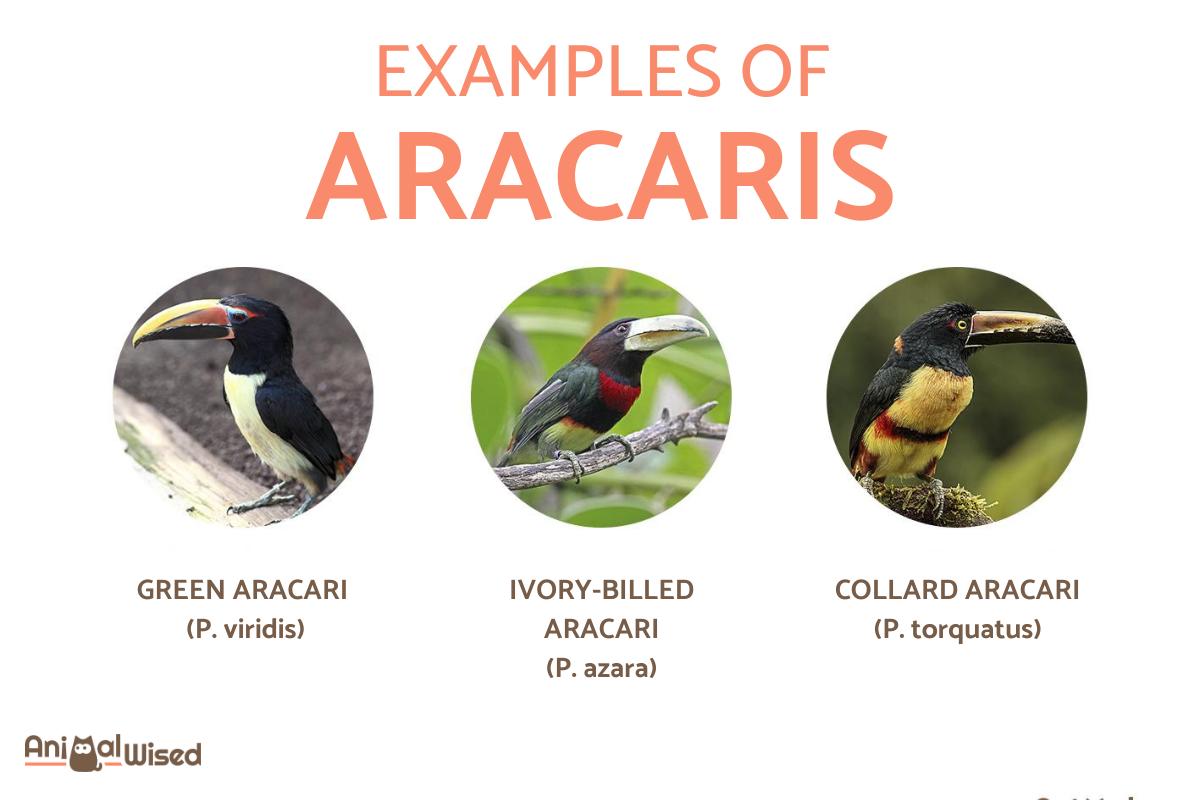 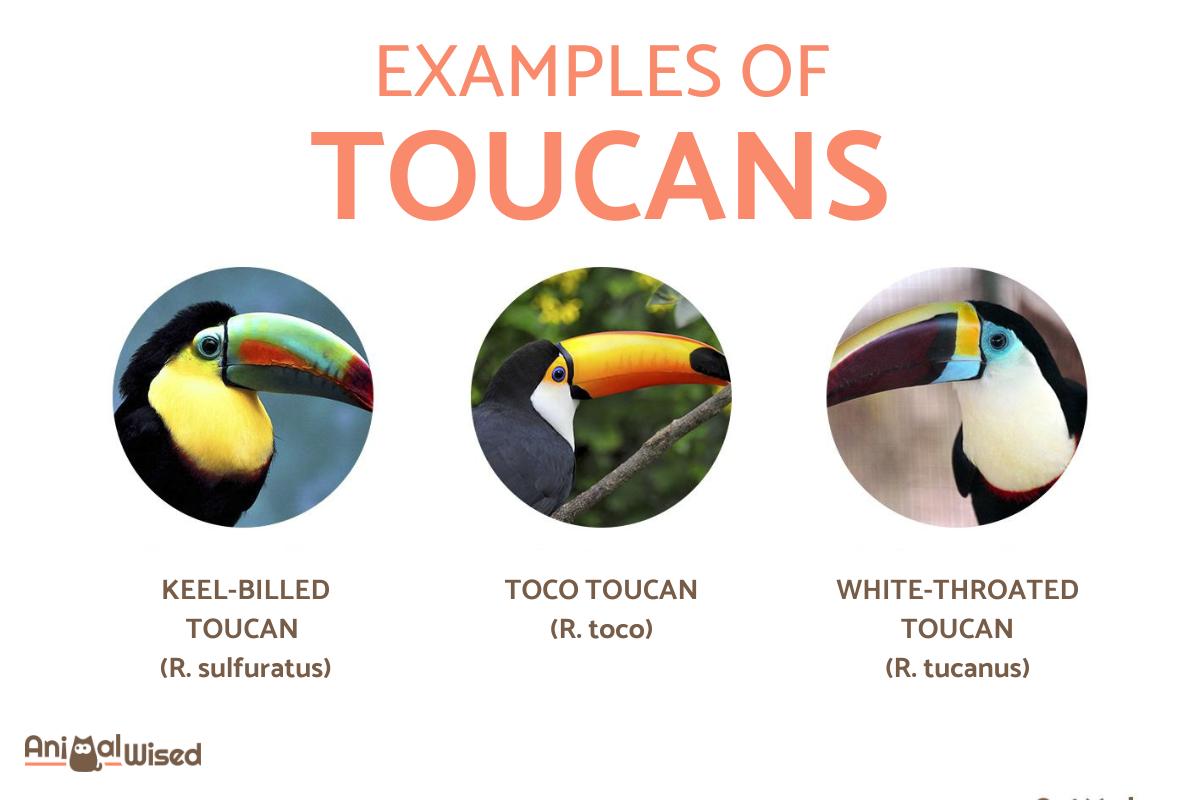