Why Do Cats Lick Each Other?

Cats can lick for hours. When you have that much fur, being clean takes dedication. Removing dirt accumulated over the day or detangling knots from their fur, cats use their specially adapted tongues to maintain proper hygiene. However, sometimes this cleaning ritual doesn't stop with their own bodies. Their licking migrates to their furry friends and we may not understand why.

If you have several cats at home, you may see they begin to groom each other, even when there is no obvious reason for it. The cats have their own tongues and may appear perfectly clean, especially if they are indoor cats with less opportunity for mess. Keeping reading AnimalWised to understand why do cats lick each other and see if it is more than just vanity.

You may also be interested in: Why Do Cats Sniff Each Other's Butts?
Contents

Reasons a cat licks themselves

Before we answer why cats lick each other, let's clarify the reasons why they lick themselves. The majority of the time spent licking is a cat engaging in their own grooming ritual. This means coursing over their fur to get at every reachable part. It doesn't just mean licking. It is not uncommon to see cats biting at hard-to-detangle knots or getting their teeth in between their toes.

Cleaning their fur usually happens at different times of the day. For example, cats may groom themselves after eating to get rid of food remnants as well as the smell. This is behavior which is natural and inherited from their parents.

Another reason for licking is due to a cat's lack of sweat glands. Like many mammals, these are only located on the pads of their paws. This is why, when it is very hot, they cannot rely on this small area of their body to regulate their temperature. This is where licking comes in. It does so by leaving a trail of saliva when they lick themselves. When this salvia evaporates in the heat, it gives the cat a fresh feeling of coolness.

Additionally, licking is actually a form of relaxation. If your kitty is anxious, stressed or generally out of sorts, then they will lick themselves for comfort. The actions relaxes them and likely invokes the feeling of being mothered as a kitten. This licking is usually done on the sides of the body or even by licking their paws and then rubbing over their head and snout. We have to be careful, however. Excessive licking can be a sign that this stress is too much and that there is either a physical or mental problem at foot.

Cats lick each other for bonding

Licking is not only functional. It can also be a physical display of the confidence in each other some cats feel when together. This is called social grooming and it has several reasons behind it. One of them is simply to strengthen the bond between two or more felines. It is also important to remember that even hairless cats will lick themselves and each other as staying clean is important with or without fur.

If your cats do this, it means they love and trust each other very much. They feel relaxed when they are together and they are happy to express this. Like any trust exercise, it opens them up to being vulnerable and it is something which may not necessarily happen easily. In this instances, the licks are usually concentrated in the facial area and the ears, a cat's favorite places to show some love.

Cats from the same family licking each other

Cats also lick each other to strengthen their ties within the same family. This can be those in the same litter of kittens, but they don't always have to be with blood relatives. If cats grow up together, they will feel a familial bond and encourage it by licking another's coat. The licks don't just serve as a sign of affection. They also impart a familiar aroma onto each other which identifies them as one of the family and distinguishes them from potentially threatening outsiders.

This may lead to the question of why does your cat lick you? Well, we have good news. It means they consider you one of the family!

Why do cats lick their young?

Adult cats will usually spend a large part of their time licking their kittens. They do so both to identify them as members of their family as well as warning others that this kittens are part of their territory. This means they will best protect them against anything which tries to cause them harm.

In fact, if the mother does not lick their cat enough it can give them a change in smell which can even lead to rejection. Mothers will reject their kittens if they seem unfamiliar or if they have an illness. Licking strengthens a necessary bond, without which there can be severe trouble.

Cats licking each other for protection

Taking a new cat into your home is not an easy decision. There is always the fear of how the cat which already resides there will react. In these cases, not all cats will take the arrival of a new family member the same way. Some cats can be problematic and find it difficult to socialize with a new cat. Others, however, will be more relaxed and warm to a new friend quickly. This is why is is so important to know how to introduce a new cat into a family.

The new cat arriving into the domestic situation may feel distrust or even fear due to being in the territory of another cat. When this happens, cats who already live there may start to smell and lick the newcomer, adopting a protective position. This is a form of welcome which is a very positive sign if you want to have more than one cat living together. With this gesture, they not only transmit a sense of tranquility, but may take them under their tutelage and show them the ropes of their new home.

Have you seen signs of disease?

There are times when a cat will lick another cat because they have noticed and existing health problem. In these cases, the cat will usually focus on a specific area which coincides with a part which is hurt or damaged. This can be from a wound caused by an injury or a blow or it could be a symptom of a disease such as kidney problems, heart failure or any number of pathologies.

Why do felines do this? It is believed to be a way for them to comfort those they feel close to in moments when they are unwell. If you do notice that one of your cats licks another intensely in the same spot, it is perhaps a sign they need a medical check up from the vet.

As we can see, cats will lick each other for a variety of reasons. They will take part in mutual grooming to ensure that they are kept hygienic. This may not be completely selfless. If cats live in a group and one of them becomes infected by something, then the rest of the group also runs the risk of being infected. Keeping each other clean is a way of maintaining group well-being. They may also lick one more than another, implying a stronger bond and showing how cats can get along better with some more than others.

However, during these social grooming rituals, it is not uncommon for a cat to lose patience with another and give them a blow or a bite. It could even develop into a full blown fight. But why do cats lick each other before they fight? The answer is unclear. It will firstly depend on the type of fighting. If it is merely play fighting, then it is just another sign of camaraderie. If the biting and scratching is serious, then the reason may be harder to determine. Whatever it is, it will be evident to them. You may need to separate them, but can be careful if they are in a vicious mood.

If you want to read similar articles to Why Do Cats Lick Each Other?, we recommend you visit our Facts about the animal kingdom category.

Why do Dogs Smell Each Other’s Butts?
How Do Animals Communicate With Each Other?
Why Do Dogs Lick?
Fish Chasing Each Other - All Possible Reasons
Related categories
Endangered animals
Most read
1.
What Animal am I According to my Zodiac Sign?
2.
What Does It Mean When a Cat Shows Up at My Door
3.
10 Most Beautiful Animals in the World
4.
The 10 Most Solitary Animals in the World
5.
How Many Types of Lions Are There?
6.
Why do Dogs Get Stuck when Mating?
7.
10 Smells that Attract Cats
8.
Animals With Scales - Full List
Why does my Dog Lick Urine of Other Dogs?
Why does my Rabbit Lick Itself?
Why do Cats have a Rough Tongue?
Why do Cats Meow?
Why Does My Cat Lick My Hair? - Reasons Cats Groom Humans
Why Does My Cat Lick My Face When I Am Sleeping?
Why Does My Dog Like To Lick Me?
Why do Cats like one Person more than Another?

1 comment
megan
15/09/2018
I would like to suggest that in answer to your section on why cats lick each other before they fight I would venture the suggestion that it is because one is grooming them too roughly or hurting them. Similarly to how you could have a friend or parent brush your hair and it’s a bonding experience until they pull your hairs in painful ways and then you get irratabke with them. I would also suggest that sometimes there is a more controlling cat of the two - I have two cats and one always holds the other one around the neck when he is grooming her she puts up with it for a while but when she tries to move and he tightens his grasp as if to say “get back here, I’m not done” it usually ends in a fight.

You make a good point in that a cat may try to assert their dominance over another cat via grooming, especially as mother cats are dominant over their offspring. However, even if they are dominant, both parties will have to be accepting otherwise fighting would ensue.
Why Do Cats Lick Each Other? 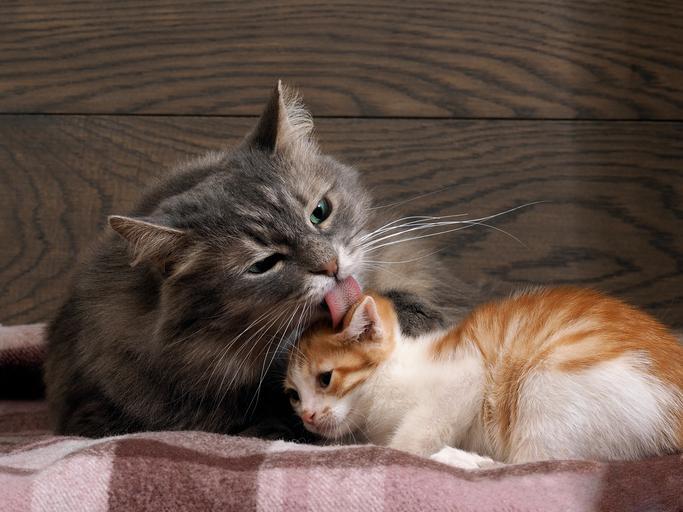 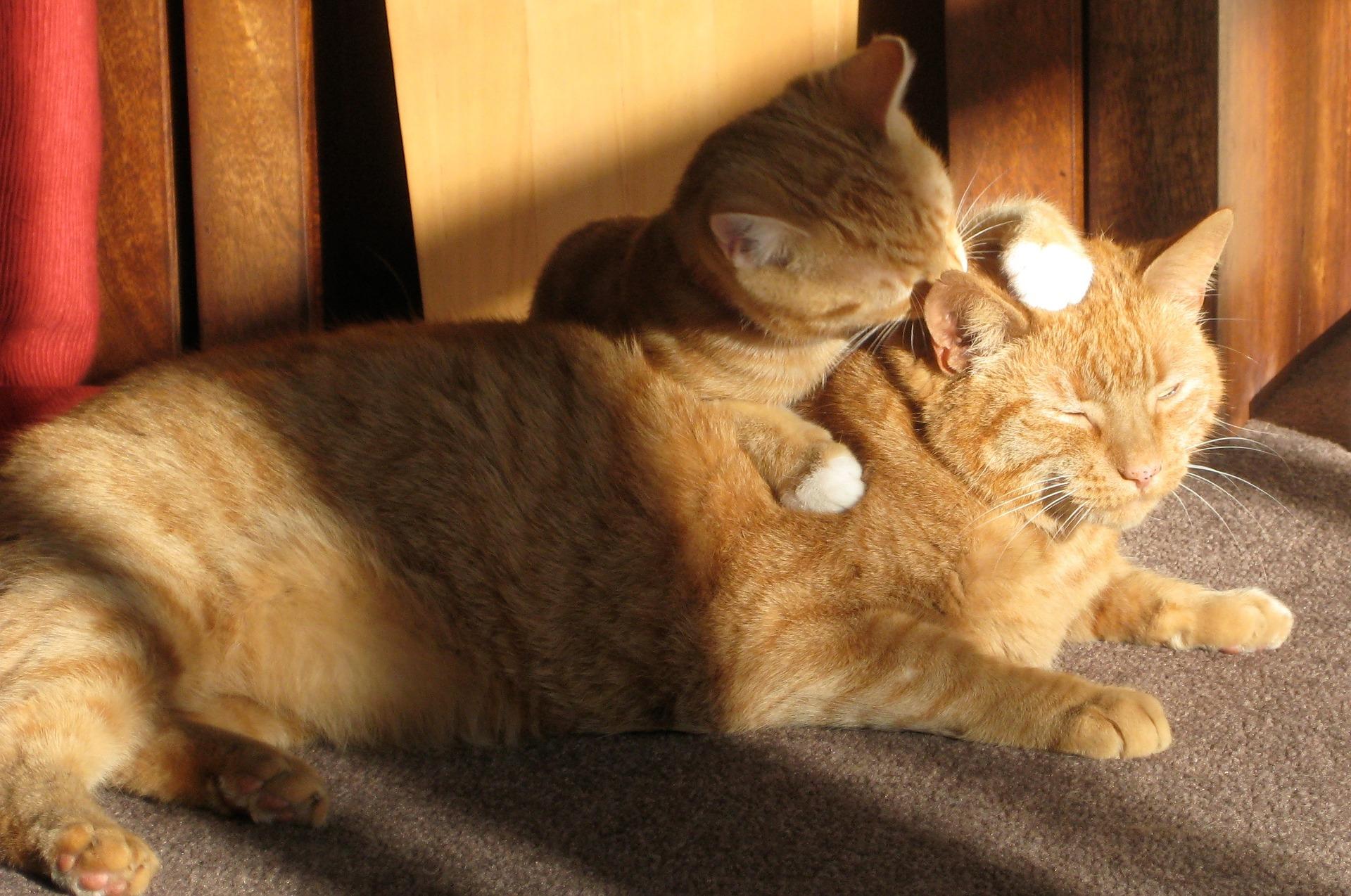 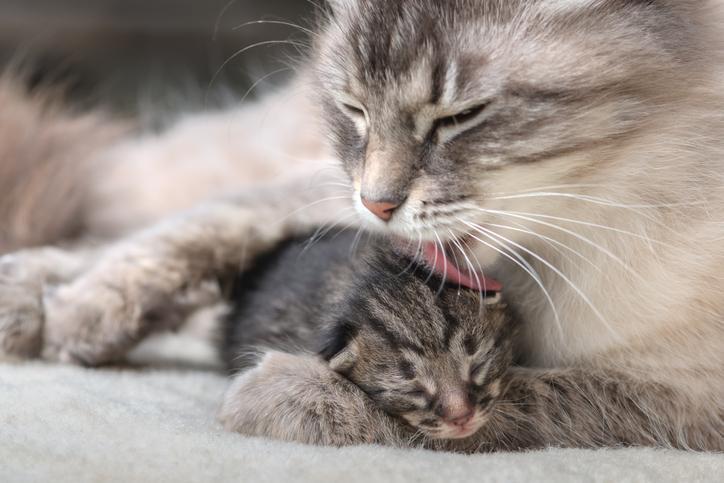 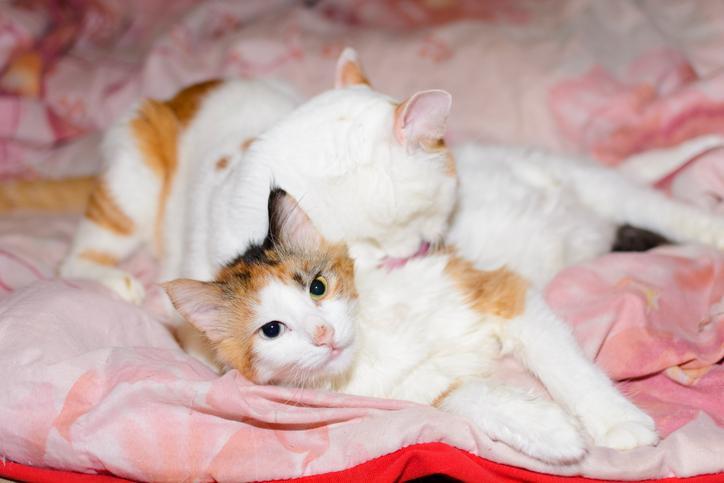 1 of 4
Why Do Cats Lick Each Other?
Back to top