Why Does My Dog Vomit After Eating? 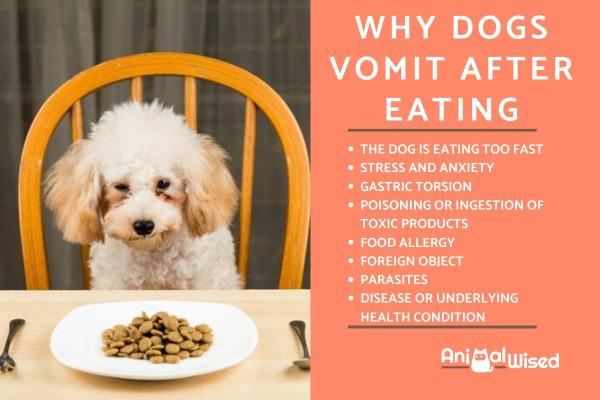 Have you noticed your dog vomits after eating? Gastrointestinal issues are one of the most common health problems affecting dogs. Vomiting is one of their most common symptoms. It is a sign we need to take care of their digestive health, but it may also be a signifier of something more serious. This is why it is important to determine why does your dog vomit after eating?

At AnimalWised, we show you the reasons why a dog may vomit after eating. We explain that it is something which can be linked to both their physical and psychological well-being. From the beginning, however, we also stress how important it is to have a veterinarian diagnose the problem properly.

You may also be interested in: Why Does my Dog Vomit Bile?
Contents

Why dogs vomit after eating

As an overview we provide the various reasons why a dog may vomit after eating:

In the sections below, we explain more about these causes as well as possible treatment options for the dog. Some may be relieve themselves of their own accord, some may need treatment and others may be symptomatic of a longterm condition.

Differences between vomiting and regurgitation

Vomiting is a symptom which indicates a gastrointestinal disorder. Even mild digestive problems can have this as a symptom. It consists of the sudden expulsion of stomach contents through the mouth. This is most often in the form of food, but it also contains bile, stomach acids and anything else which may be in the organ at the time of vomiting. It is usually preceded by nausea and retching, but not always. Vomiting and diarrhea together is a common symptom of GI issues in dogs.

We should differentiate between vomiting and regurgitation. Vomiting is an involuntary reflex which is caused by many factors. Regurgitation refers to the expulsion of undigested food which is voluntary. The food will normally not have reached the stomach and, therefore, not contain stomach acids.

If you see your dog has expelled some food which is not digested, although it may have been chewed, it will likely be regurgitation. This process is usually not accompanied by retching or nausea and the dog will often appear otherwise fine. While regurgitation may not be a cause for concern, it shouldn't be ignored either. This is why we look at the common causes of vomiting below.

The dog is eating too fast

The main reason for a dog vomiting after they eat is to do with how fast they intake food. When our dog is voracious with their eating, it can be due to a number of factors. One of the first is their breed. Some animals are large with a wide mouth and can eat their food very quickly. However, some dogs such as different Bulldog breeds, have large mouths, but shortened palates. This means if they eat quickly it may have troubling passing down the esophagus, causing them to vomit the food back up.

Regardless of breed, some dogs are particularly gluttonous and will simply eat too much. In these cases, it is not necessarily because they eat too fast. Eating too much means their stomach overloads. When they eat more food, they may vomit due to lack of space. In these cases, we need to reduce the portion size of the dog's feed and space them out throughout the day. We also need to remove treats until their diet is stabilized.

When a dog overeats, it may be due to a psychological problem, rather than over-appetite. When a dog is anxious or stressed, they may overeat to combat the negative feelings. Food itself may be a cause of the anxiety. Dogs are animals of routine and they want to know their resources are secure. If we give the dog food at irregular times or late, they may think they are not getting any at all. When they eat, they may eat quickly out of fear they will not get any more, vomiting in the process.

Other stress causing problems in the home might lead to eating too quickly and vomiting afterwards. If we see our dog engaging in this behavior, it is important we look at their situation and find any reason they may be stressed. We can also look at other signs of stress in dogs to see if it is indeed a psychological issue.

If the reason why your dog vomits after they eat is due to eating too quickly, there are ways you can slow them down. There are special feeders which require the dog to work out how to reach food. These not only help them to eat more slowly, but it improves their cognition. Kong toys also have a similar effect.

Unfortunately, there are some serious issues which can lead to a dog vomiting after they eat. These include something known as gastric torsion in dogs. Otherwise known as bloat, it is a problem whereby the dog's intestintal tract becomes twisted on itself. This prevents intestinal transit and the dog cannot hold down food. However, the dog will still be hungry, so they eat and then vomit again.

There are many symptoms of this very serious problem. The dog's stomach will become hard to the touch because the food is building up. Eventually, they dog will stop eating altogether, will be in serious pain, pass out and, if treatment is not initiated, they will die.

Seeing a dog vomit after they eat may be the first sign the dog has bloat. Taking the dog to the veterinarian immediately before the problem becomes worse can help with the prognosis.

Poisoning or ingestion of toxic products

When we speak of poisoning, we often think that they will have to have eaten something generally poisonous. However, there are foodstuffs humans can eat that can be very dangerous to dogs. Chocolate and grapes are examples of otherwise normal foodstuffs which contain toxic substances harmful to canines. When a dog eats them, they may vomit immediately. If they ingest enough, they can go into toxic shock and will need emergency veterinary help.

However, it is also possible that a dog will eat non-food items accidentally. Cleaning products, hazardous waste and other materials we leave around the home can be ingested accidentally by the dog, vomiting as a result. When the dog vomits immediately, it may be the expel the toxic substance, but not always. We should take them to the veterinarian just in case as they may need their stomach pumped or be given treatment such as fluid therapy.

While many people worry about having an allergy to dogs, it is easy to forget that dogs themselves can have a food allergy. When the dog eats something they are allergic to, there are various possible reactions. Some dogs will not react for a long time or will not show obvious symptoms other than diarrhea. If the allergy is acute, they can vomit immediately after eating. Dogs can also go into anaphylactic shock if they have a food allergy, a serious condition which requires immediate treatment.

This is most common in puppies, but it can happen to any dog. Due to inquisitiveness, the dog may eat something indigestible such as a piece of plastic or metal. When they cannot digest the object, it becomes stuck in their esophagus or stomach and they vomit when they next eat.

The dog may eat a foreign object by accident, often thinking it to be food. However, if the dog is under psychological duress, it is possible they will suffer from something known as pica syndrome. They may carry out strange behaviors such as licking metal or performing repetitive behaviors. In these cases, you will need to address the underlying problem with the help of a canine ethologist.

When the dog is suffering from a parasitical infestation, it is possible they will vomit after eating. This will be the case with intestinal parasites, but less likely to occur with external parasites. The parasites cause the digestive tract to malfunction. It is less common for the dog to vomit immediately after eating, but it is possible.

When the dog vomits is only one aspect of a problem. If your dog is also vomiting blood, it is likely a serious problem which could be caused by parasites or other factors.

When the dog has an underlying disease, it can mean they cannot keep down food. If this is a recent viral or bacterial infection, it is possible vomiting is a symptom. When the infection is treated or with time, the vomiting should stop and they can resume normal eating habits.

However, it is also possible that there is an underlying health condition which means the dog vomits after eating, For Autoimmune diseases such as hemolytic anemia may cause the dog to vomit or have poor appetite. In this case, it is due to the presence of too much bilirubin.

Some problems do not have many other observable symptoms until the disease is progressed. For example, kidney and liver failure can take a long time to deteriorate the organs. Vomiting after eating may be an early sign there is a problem. This is another reason it is vital we take the dog for a checkup if the problem persists.

Other reasons why dogs vomit after eating

There are some other reasons why may lead a dog to vomit after eating. They include:

Whatever the cause of a dog vomiting after they eat, it is vital we take the dog to a veterinarian to diagnose the problem and provide suitable treatment. In some cases, vomiting can be the first sign of a major health issue. This video on whether your dog is dying can help you to know more:

If you want to read similar articles to Why Does My Dog Vomit After Eating?, we recommend you visit our Other health problems category.

Why Does My Dog Vomit Blood?
Why Is My Cat Vomiting Yellow?
Why Is My Dog Vomiting And Has Diarrhea?
Why is My Dog Gagging All the Time?
Related categories
MedicineNeurological diseasesDe-wormingVaccinationEye problemsBacterial diseases
Most read
1.
My Dog's Poop Starts Solid Then Goes Soft
2.
My Dog Is Bleeding from His Penis
3.
Can I Bathe My Dog After Vaccination?
4.
My Dog Has Pus Coming From His Penis
5.
My Cat Has Liquid Coming From Their Anus
6.
My Dog Keeps Licking Her Private Area - All Possible Reasons
7.
Why Does my Dog Have Swollen Breasts?
8.
What to Do if My Dog has Something Stuck in his Throat?
Why Is My Cat Vomiting White Foam?
Why Does My Dog Drool so Much?
My Dog Vomited Black Liquid
My Dog Is Acting Weird After Flea Medicine
Why Does My Dog’s Breath Smell Like Fish?
My Puppy Is Throwing Up and Not Eating
Why Does My Cat Vomit After Eating?
Why is My Dog's Belly Hard

Why Does My Dog Vomit After Eating? 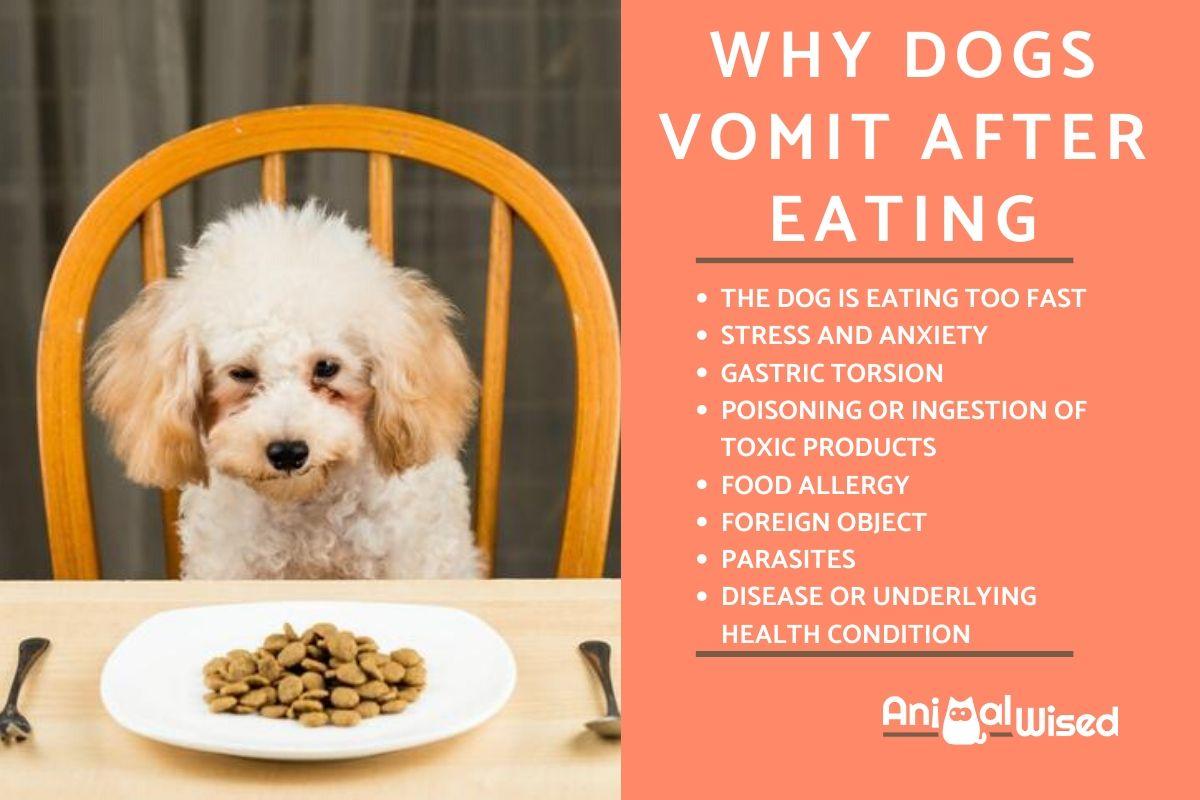 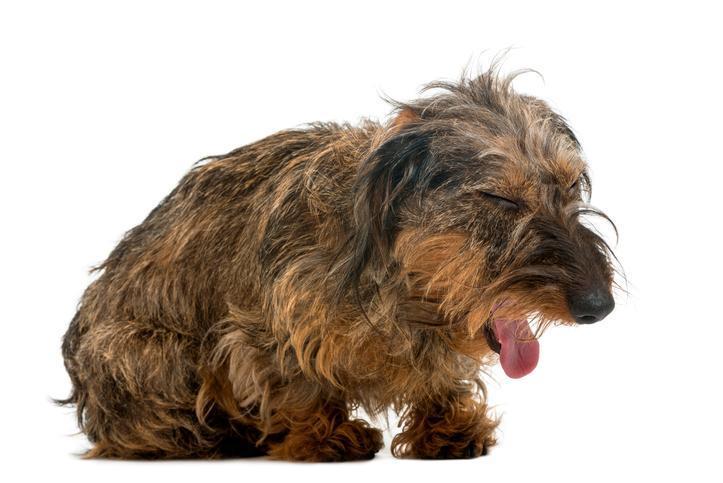 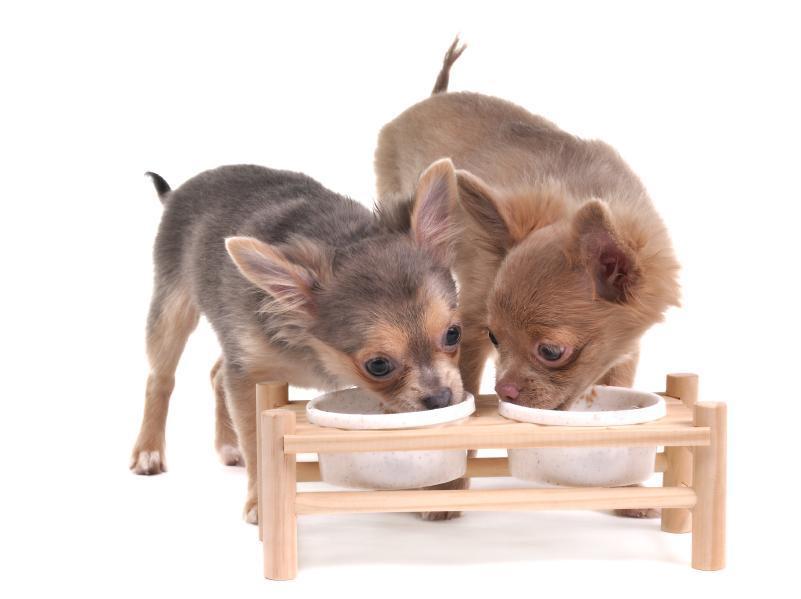 1 of 3
Why Does My Dog Vomit After Eating?
Back to top