If you think the Exotic Shorthair cat breed looks like a Persian cat, there is good reason. They were expressly developed to have the Persian cat's distinctive features, except, as the name suggests, with shorter fur. To create this new breed of cats, the Persian was crossed with various breeds including the American and British Shorthair varieties. The result is a sweet and gentle cat which combines vitality and tranquility in almost equal measure. They are an ideal family cat as they are great with children and are particularly fond of plying and spending time indoors. If you are considering adopting an Exotic Shorthair cat, AnimalWised brings you everything you need to know about the characteristics, care and health requirements of this beautiful feline.

Origin of the Exotic Shorthair cat

As referenced in the introduction, the Exotic Shorthair cat breed originates from crossing longhair Persian cat breeds with British Shorthair and American Shorthair cats. This hybridization has given rise to a breed which began to achieve fame during the 1960's and 1970's. Although consolidated as a breed in 1966, it was not until 1986 that the Fédération Internationale Féline (FIFe) officailly recognized them as a distinct breed. They established the current breed standards at the same time. We are, therefore, facing a relatively new breed of cat, whose popularity is far from being as great as that of the Persian. Nevertheless, this doesn't mean they don't have their passionate followers. One particular appeal is the relatively less maintenance required for their shorter coat.

It is believed that the first person to cross the Persian and American Shorthair breeds convinced cat show judge and member of the Cat Fancier's Association (CFA) Jane Martinke to first recognize the breed. Up until this point, the Exotic Shorthair had been considered a variation of the Persian cat breed. Afterwards, they were given the name of Exotic Shorthair. Despite the shorthair crosses, it is possible for the longhair gene to present itself in an Exotic Shorthair's offspring. Some jurisdictions will consider this breed to be a Persian cat, others an Exotic Longhair.

There is further classification of Exotic Shorthair cats which qualifies them by the pronouncement of their snout. This facial shape is known as ‘typing’, with the more pronounced snout known as ‘traditional’ typing and the more snubbed specimens being known for their ‘peke’ typing. The latter head shape makes them more prone to respiratory and ocular pathologies due to the shape of their skull.

Of an average build, they are quite stock and of a weight which ranges from 3 to 6 kg. Their legs are short, but they are broad and robust. Their tail is short, rounded and thick. The Exotic Shorthair breed does have hair which is considerably shorter than the longhaired Persian breed. However, their fur is generally a little longer than most other shorthaired cat breeds. They can display all the same colors and patterns of the Persian cat breed.

Being one of the most affectionate and caring cat breeds, the Exotic Shorthair is ideal for families. This is why loneliness is particularly devastating for this cat breed. If they do not receive enough attention and affection, it can lead to serious mental and physical health issues. Due to the character and personality of the Exotic Shorthair cat, it is crucial to help them manage loneliness.

Looking at the temperament of the Exotic Shorthair cat breed, we can say that it is a quiet and docile animal. They are not difficult to educate and can even be taught some tricks. They are intelligent, faithful and, in general, easy to live with. Additionally, Exotic Shorthair cats will also live well with other cats and animals. It's even possible for them to get on with animals otherwise considered prey such as rabbits or domesticated rats.

Among the various needs of the Exotic Shorthair guardians need to meet, is caring for their coat. Despite not needing as high a level of care as their progenitor the Persian, they will still need regular brushing. Although they will shed more during molting season, they will drop dead hairs throughout the year. Regular brushing helps to collect this dead fur and prevent it collecting on the furniture and fabric in the home. It also helps to prevent hairballs which can get lodged in the cat's gastrointestinal tract. We can also use this time to both bond with out cat and to monitor their coat for any signs of disease or parasitical infestation.

To accompany monitoring their coat, you will need to carry out both external and internal deworming to prevent parasites. This is especially the case in Exotic Shorthair cats with access to the outside. Parasitical infestations can often cause harm to the cat which does not initially display symptoms. Additionally, as with all cat breeds, we will need to provide them with an adequate diet which meets all of their nutritional needs. Environmental enrichment is also particularly important for Exotic Shorthair cats. As they are playful and intelligent creatures, you will need to provide toys and games which will improve their physical wellness and cognition. Since they do not enjoy spending time on their own, you will also need to have enough stimulation to keep them entertained when you are not in the home.

Finally, with Exotic Shorthair cats, their brachycephalic nature means they are prone to eye leakage. We need to clean their eyes fairly regularly to remove stains from their fur and avoid any build up which could lead to infection. Using sterile gauze and some saline solution should be sufficient.

In general, the Exotic Shorthair cat breed is a fairly healthy and robust cat. However, there are some particular health issues which should not be overlooked. As their snout is flat and shortened, the Exotic Shorthair can present respiratory problems typical of these types of animal breeds. However, the problems present in this breed are significantly lower than their progenitors, the Persian cat.

Excessive tearing of the eyes can result in the eye area oxidizing and becoming infected. Cleaning the area properly and monitoring for any signs of disease is essential. Exotic Shorthair cats are also prone to hypertrophic cardiomyopathy, a congenital disease which results in heart problems.

As a means for prevention and early intervention, it is recommended we provide routine examinations of their teeth, ears and eyes. We also need to maintain their vaccination schedule as well as provide regular veterinary checkups.

European Shorthair
Korat
Munchkin Cat
Cymric Cat Breed
Related articles
New
Albendazole for Cats - Uses, Dosage and Side Effects
New
My Cat Is Not Peeing Anymore - Causes and Treatment
New
My Cat Keeps Biting My Hand
Why Does My Cat Bite Me Gently While Purring?
My Cat Peed on Me - Why and What to Do
How Many Kittens Can A Cat Have?
Metamizole for Cats - Dosage, Uses and Availability
Aural Hematoma in Cats - Causes and Treatment

Upload a picture of your Exotic Shorthair 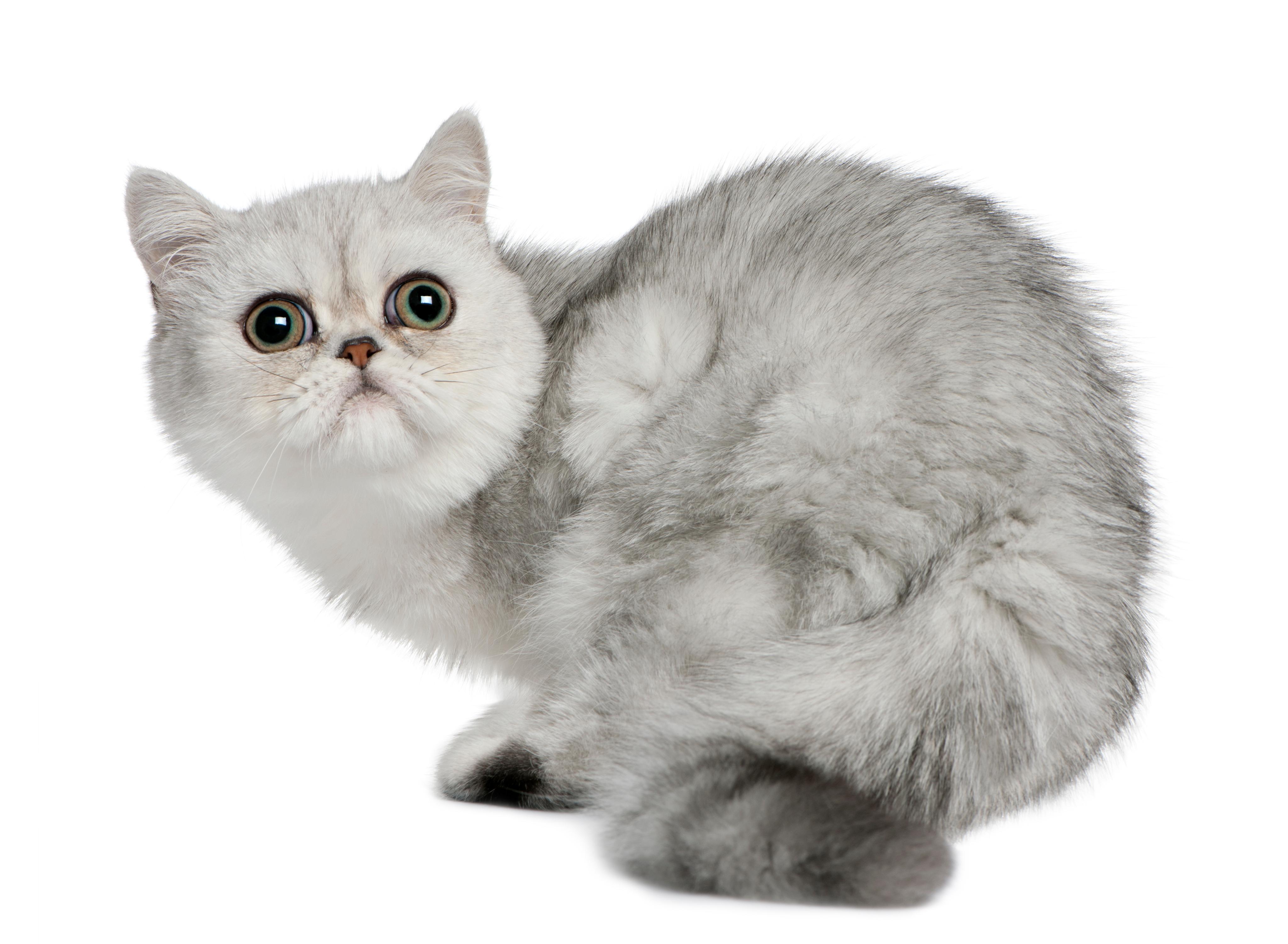 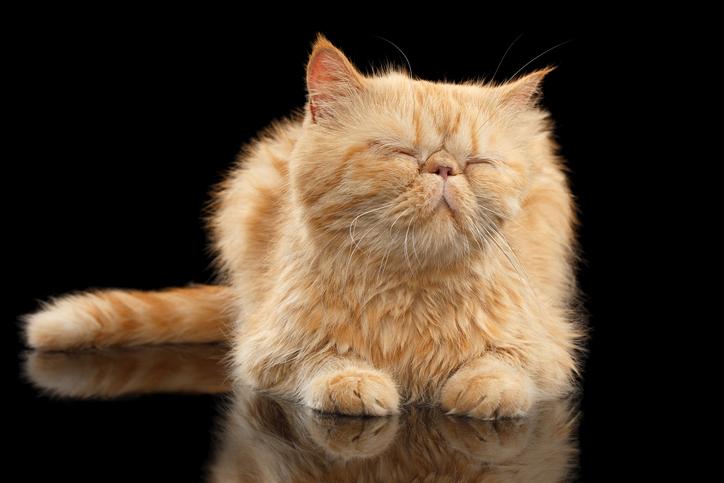 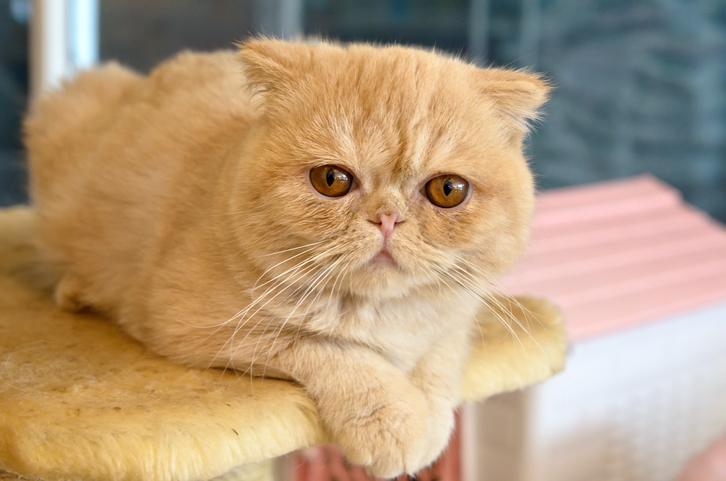 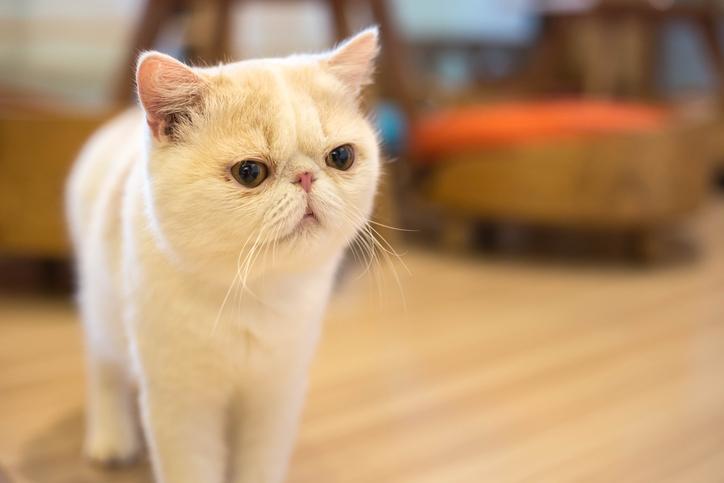 1 of 4
Exotic Shorthair
Back to top