How do Frogs Reproduce? - Frog Reproduction

Frogs are amphibians that are present in various ecosystems all over planet earth. You can find most frog species near ponds and rivers. In fact, all frog species require an aquatic environment, specifically because this is where they carry out several of their life cycles. But how do frogs reproduce?

You may also be interested in: How Do Butterflies Reproduce?
Contents

Before explaining how frogs reproduce, you should know that frogs carry a marked sexual dimorphism. This means that there are notable physical differences between male and female frogs. In general, male frogs tend to be smaller and more flexible than females. In addition, their skin is rougher and they develop small finger pads on their legs.

Where do frogs live?

So, how often do frogs reproduce? Well, this depends largely on the species and environment. In general, when it comes to a dog’s breeding season, most species wait for the warmer months like spring and summer before mating. In terms of frog species that live in tropical climates, where temperatures are constantly high, reproduction can take place at any time.

How to frogs reproduce?

A frog’s reproduction process begins with vocalizations by males to call females. The females then vocalize in response. After this, the male places himself onto the female with his legs, with the aim of stimulating egg spawning. This position is called "amplexus". Frogs reproduction and fertilization occurs externally, which means that the eggs must be released for the male to fertilize them.

Male and female frog genitalia is housed within a frog’s body, but male frogs technically have no penis and females have no vagina. Instead, both release their sex cells through holes located in their bodies (for this specific purpose). The amplexus embrace between frogs stimulates the female to release her eggs which she expels in the form of a gelatinous mass. The contractions from the female thereby stimulate the male to pray the eggs with sperm, fertilizing them.

In most frog species, the frog mating process is carried out in water, since eggs require high levels of moisture to avoid drying out. In addition, depending on the species, frogs can expel between 3,000 and 20,000 eggs per individual mating.

How are frogs born?

Once the frog fertilization process has been completed, the egg incubation period begins. These can vary in color including shades of white, dark gray or black.

When are tadpoles born? Although this generally varies depending on the species and climatic conditions, most tadpoles are born between 2 and 9 days after fertilization.

After the incubation period, the tadpoles break the egg barrier until completely free in the water, by which they initiate their life cycle.

When frogs are born, the adult frogs do everything possible to keep the ‘‘hatching’’ eggs free from predators, such as fish, ensuring the survival of the tadpoles. Despite that many of these tadpoles are eaten by other animals, the high number of eggs expelled at each laying allows for many tadpoles to complete the frog cycle into adulthood.

For more about the tadpole life cycle, keep reading below.

As part of the frog life cycle, tadpoles form into adult frogs. But what does this process imply? And how long does it take for tadpoles to become frogs?

At birth, frogs are larvae. At this stage, they are completely aquatic and weigh only 6 mg. Larvae have no mouth or tail, these only appear a few days later, when the larvae form into tadpoles. Tadpoles weigh around 1 g and have tails and gills. You may also be wondering, what do tadpoles eat? Tadpoles feed on algae, plankton and different microorganisms found in water.

The next step in frog metamorphosis is imago stage, at which time the tadpoles (after several weeks) increase in weight and begin to develop lungs and legs. Some weeks later, tadpoles begin to resemble adult frogs: eyelids, eardrums and the tongue begins to develop, allowing them to deploy and catch insects.

At this time, the frog can leave the water and begin terrestrial life, until the tail is detached in a process called apoptosis. Apoptosis defines the death of cells, as a part of development. In this stage, weight increases in most species. In general, most frog species reach sexual maturity at 8 months, although it can take some 3 years.

For more, you may also be interested in reading our article where we discuss animals that go through metamorphosis.

For more about the life cycle of a frog, we recommend watching this YouTube video by Designmate Pvt. Ltd. - Official channel: 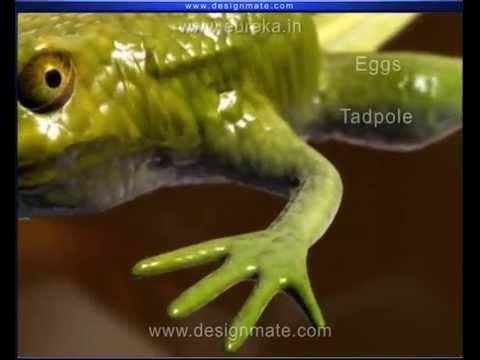 The above description of a frog’s life cycle corresponds to what happens in most of the Anura order. However, frog reproduction may vary according to the species. For example, the Colostethus machalilla (Epipedobates machalilla) spawns its eggs in the soil, under the condition that it is wet enough. After spawning, the male protects the eggs until the larvae hatch and after 19 days, the father transports the tadpoles on his back to the water to complete the life cycle.

Additionally, in the case of the horned marsupial frog (Gastrotheca riobambae) during amplexo, the eggs are deposited in the mother's marsupium or pouch located in the dorsal area, where they can remain up to 120 days before emerging as tadpoles. These tadpoles are then released by the mother into the water to complete their development.

For more, we recommend reading our article where we discuss, what do frog tadpoles eat?

If you want to read similar articles to How do Frogs Reproduce? - Frog Reproduction, we recommend you visit our Gestation category.

Bibliography
How Do Guppy Fish Reproduce?
How do Chickens Reproduce?
How do Horses Mate? - Horse Reproduction
How do Snakes Give Birth?
Related categories
HeatFur careEar careBasic careEye careNail care
Most read
1.
When Does a Dog Go Into Heat After Having Puppies?
2.
Third Eyelid Showing in Cats - Causes and Treatment
3.
Can You Touch Newborn Puppies?
4.
Why Is My Pregnant Dog Not Eating?
5.
Dog Pregnancy - Week by Week
6.
10 Hypoallergenic Cat Breeds for Allergic Families
7.
Why Has My Cat Only Had One Kitten?
8.
How to Control a Male Dog Around a Female in Heat
How Do Rabbits Mate?
Reproduction of the Chinese Giant Salamander
How to Know if your Tortoise is Pregnant
How to Tell if My Guinea Pig Is Pregnant - Physical Signs and Behaviors
At What Age Can Cats Have Kittens?
Why is Dog Breeding Bad?
How To Care For A Pregnant Hamster
How To Tell If A Cat Is Pregnant - Symptoms

How do Frogs Reproduce? - Frog Reproduction 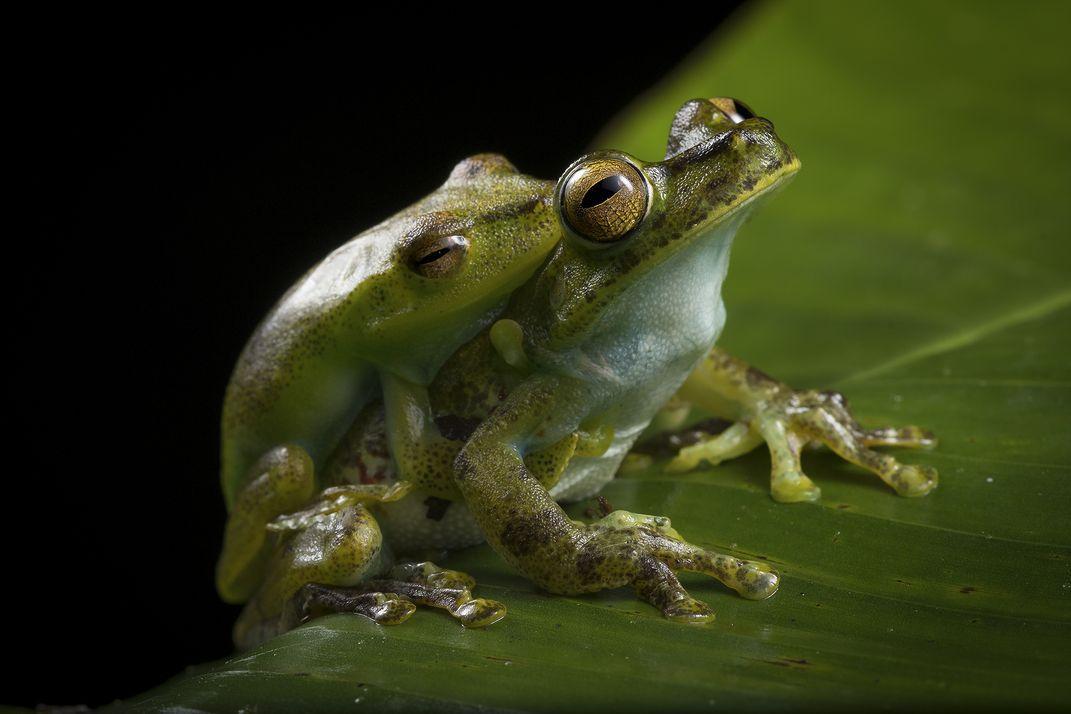 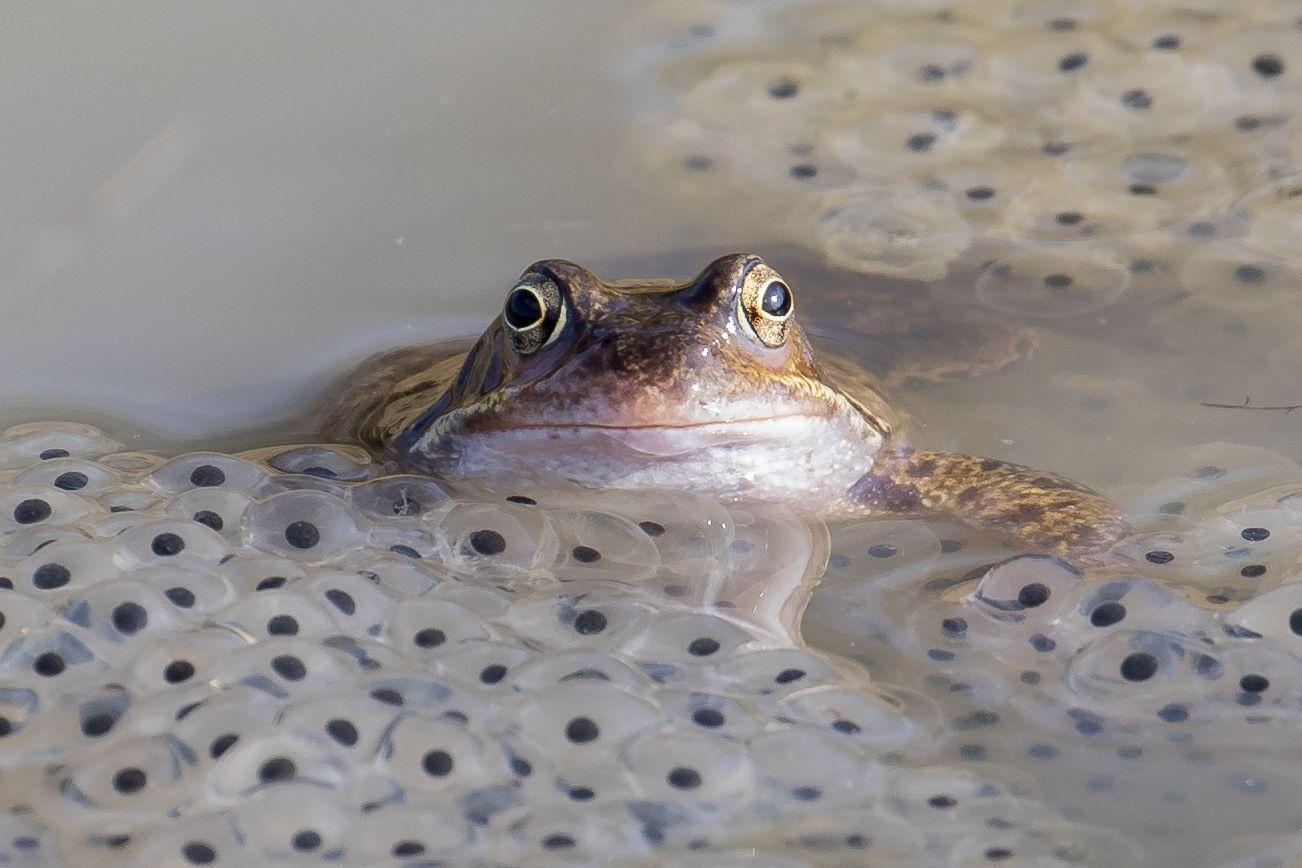 1 of 2
How do Frogs Reproduce? - Frog Reproduction
Back to top