The Russian blue Cat is undoubtedly one of the most popular and beautiful felines. If you are thinking of adopting a cat of this breed, you must be informed of their character, hair care or specific traits they possess. AnimalWised will explain everything you need to know about the Russian blue, including types, photographs and interesting information on their necessary care. Keep reading and find out more!

Origin of the Russian blue

There are several theories about the origin of the Russian blue cat, but the most popular is certainly that of the archangel cat. The first mentions about this breed explain how the first few cats were found in the port cities of the north of Russia, in the archángel islands - hence their nickname! Another story suggests that the breed had been kept secret for generations because they were considered a very exclusive cat, which should only accompany the Zares.

In the United States, some breeders imported Russian blues, in a bid to obtain some more stylized minors. Due to the different crosses that we have today, there are several types to distinguish between the Russian blue cats.

Physical characteristics of the Russian blue

The main feature that makes the Russian blue unmistakable is their short, silky, dense, cloak-like coat that resembles a plush toy. They are a uniform, bright blue color. They have large, rounded eyes of an intense green color, contrasting with their impeccable mantle. The shape of the head is a wide and medium wedge, with a flat top and a straight profile nose. The ears are wide at the base and are slightly turned outwards. They are medium in size, have fine bones and are muscular.

Russian blue cats often have very strong links with their family and especially with one particular member. They are calm and affectionate , however, they are usually reserved with strangers, like practically all cats. They are very tolerant cats with children, but we must ensure our children are aware to be gentle with the cat; they cannot pull their tail or annoy them.

They can adapt well to living in an apartment, as long as they receive constant affection and exclusive hours of play. Loneliness is not a good ally of this race, who will undoubtedly need an affectionate and homely family.

They stand out for their intelligence. They will learn their name very quickly and use different resources like the scratching post or litterbox. Likewise, they can learn to sit, to catch toys, etc. For this we must boost their skills from an early age and stimulate them on a regular basis.

Caring for a Russian blue cat

If they have learned to use the scratching post correctly, we will not need to cut their claws. We will only need to check their ears occasionally to make sure they do not suffer from a mite infestation as well as their mouth and body in general to promptly detect any problems.

You should choose a quality feed or make homemade recipes , always consulting with the veterinarian so not to generate deficiencies in their diet. Do not forget that the feeding you provide your cat will be reflected on their coat. So, give them good food and you will see much brighter and beautiful hair, as well as good general health.

Do not forget to place the litterbox, food and their bed in separate areas, as cats do not usually accept these elements when they are too close. It is also advisable to have various toys, especially the "fishing rod" type which they love, as they can interact with us.

It is generally said that the breed has a high health status, however, especially pedigree Russian blues can suffer a series of congenital diseases, especially if inbreeding (not only father-daughter, but also grandfather-granddaughter). The diseases that most affect this race are:

We should also note that the Russian blue cat is susceptible to infectious or parasitic diseases much more easily, such as:

To maintain optimal health in our feline, it is always advisable to strictly follow the cat vaccination schedule, as well as the external and internal deworming, especially if they have access to the outside. Following these tips, the Russian blue cat can live between 10 and 15 years, although they have been known to reach 21 years!

Abyssinian
Manx
Cornish Rex
Exotic Shorthair
Related articles
New
My Cat Is Not Peeing Anymore - Causes and Treatment
New
My Cat Keeps Biting My Hand
New
Why Does My Cat Bite Me Gently While Purring?
My Cat Peed on Me - Why and What to Do
How Many Kittens Can A Cat Have?
Metamizole for Cats - Dosage, Uses and Availability
Aural Hematoma in Cats - Causes and Treatment
How Long Can Cats Be Left Alone?

Upload a picture of your Russian blue

2 comments
Jamie
09/11/2018
I adopted a russian blue from a rescue. (I didnt know what he was when I adopted him) but he was just so sweet and let my son hold him. His eyes are yellow but I have recently noticed a green ring around the pupil. Will his eyes change as he gets older?

This is exactly what happens. Russian Blue cats are known for their quite intense emerald green eyes. However, when a kitten is born, its eye color is usually different than what it will be when an adult. Most cats start life with blue eyes, but the Russian Blue (perhaps ironically) is born with yellow eyes. Their green color develops around 4 months of age as a ring which then develops to color the entire eye. Thanks for the question and we hope this helped.
Angela hamilton
18/08/2018
I have had my Russian blue for 18 years she is very loving and caring to everyone her health hasn't been the greatest she has had kidney problems but will get fat fast if you don't keep her active but I love her and would do anything for her

18 years is a long time for any cat. She may have had her problems, but it sounds like you are enjoying a wonderful time together.
Russian blue 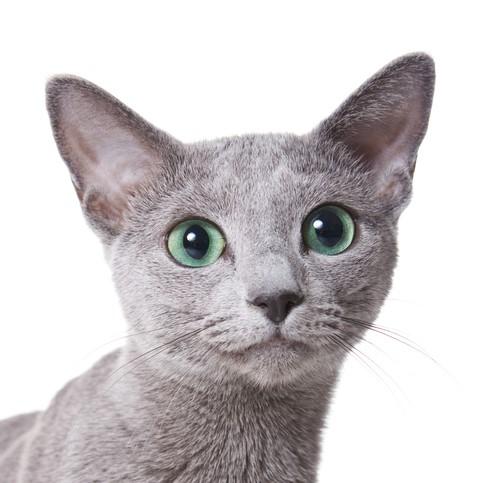 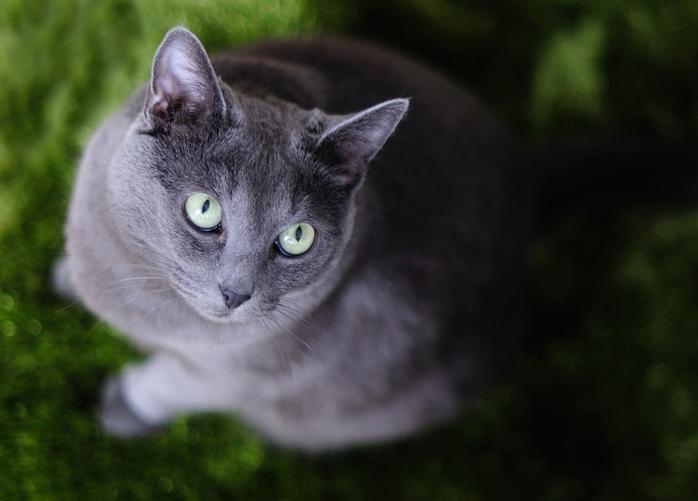 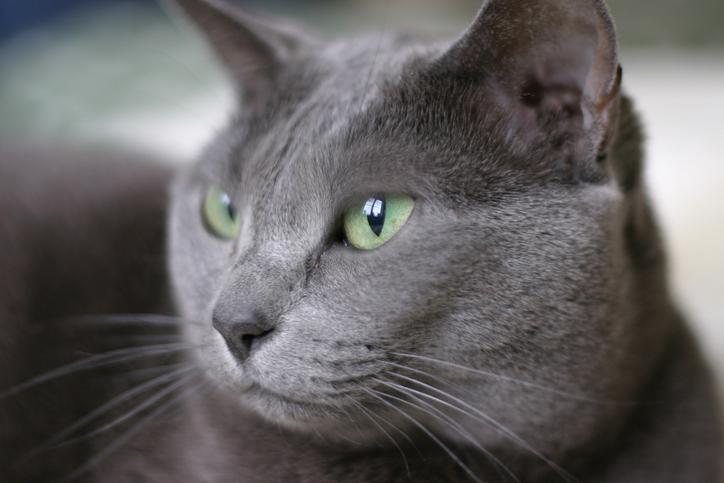 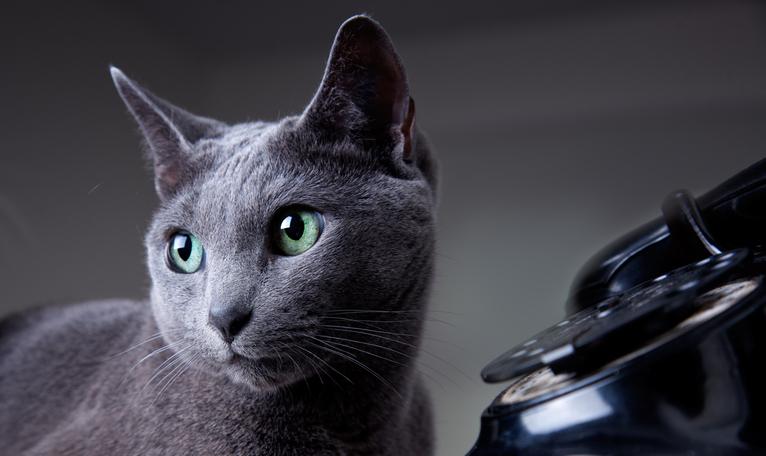 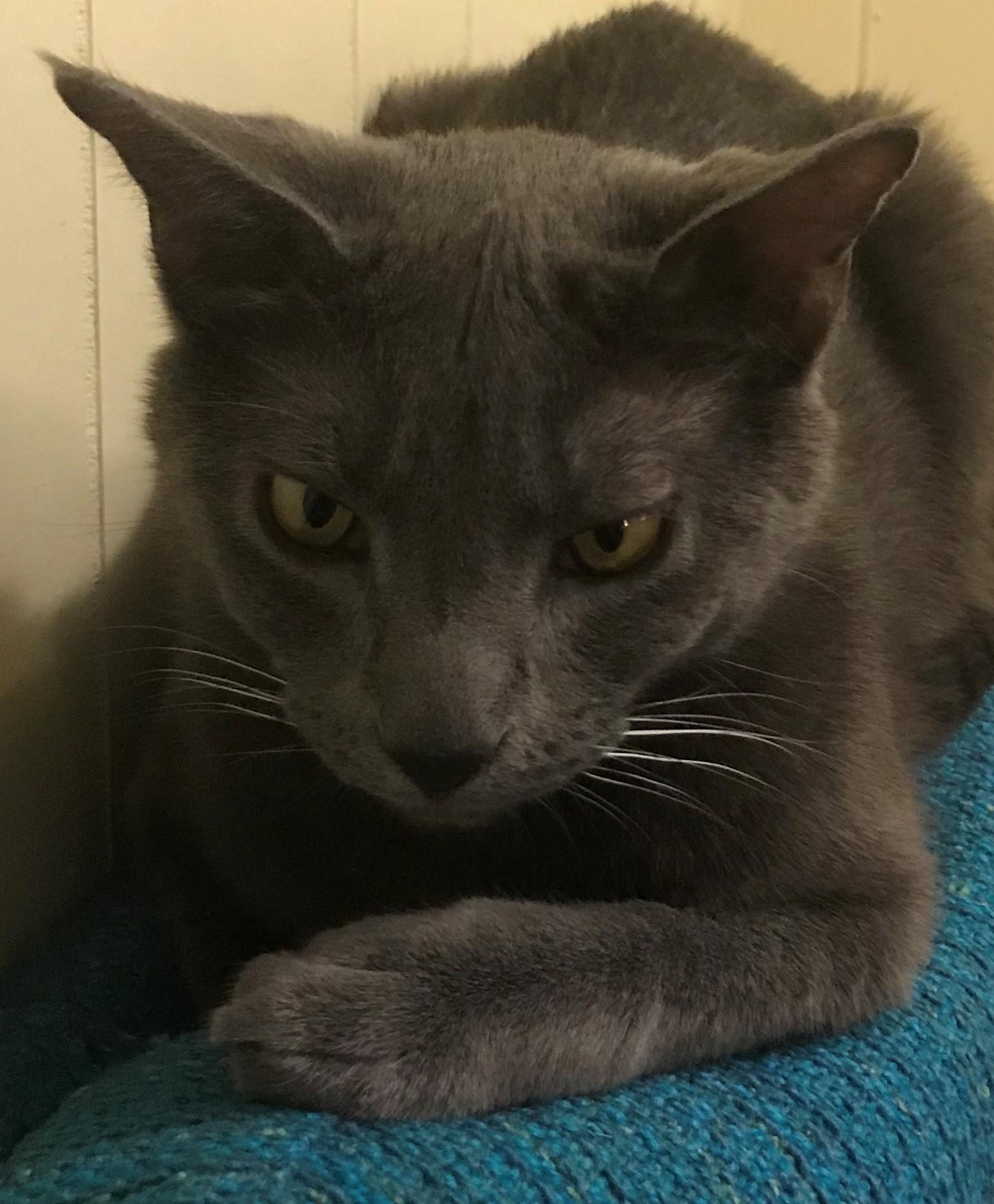