As their name suggests, the Turkish Angora cat hails from Turkey, the gateway between Europe and Asia. They are often confused with other longhair breeds such as the Persian cat. They are both very popular breeds, not just for their striking appearance, but their playful and affectionate nature. One of the oldest cat breeds in the world, the Turkish Angora is a distinguished breed with lots of fascinating features and characteristics to discover. AnimalWised shares information on this beautiful cat breed while also highlighting some practical care and health issues.

Origin of the Turkish Angora cat

It is believed that Turkish Angora cats were the first longhair cat breed in history, such are the ancient roots of this exotic feline breed. They come from the Turkish region of Turkey previously known as Angora, from where they derive their name. There are many specimens which have different colored eyes, a condition known as heterochromia. It is quite frequent in the breed. They are considered symbols of purity and, for this reason, they are held in high esteem. These specimens are called Ankara Kedisi in their homeland and are considered a national treasure. This cultural clout is so strong there is a legend that Turkey's original founder will one day be reincarnated as a Turkish Angora.

Despite the strong links to Turkey, there are diverging theories about the breed's exact origin. One such legend suggests that the breed arose form wild cats raised in China, another links its origin to cats which lived in the cold region of the Eurasian Steppe. Their thick and dense fur would have been developed to help protect them against the harsh coldness of this terrain. According to the latter theory, the Angora would be an ancestor of breeds such as the Norwegian Forest cat or Maine Coon. Others still believe they cam much later during the Islamic invasions in Persia during the 15th century.

After their arrival in Europe, there are further theories. The most widespread belief is that they arrived on Viking ships during the 10th century. What is certain is that there are documents dating back to the 16th century which record a Turkish sultan delivering them as gifts to both the English and French nobility. This is what eventually lead to the cat being very popular in Europe, particularly valued by the French aristocracy in the court of Louis XV.

Despite this long history, it was not until the 1970s that the breed was officially recognized by the Cat Fancier's Association. This was when the breed standard of the Turkish Angora cat was established. The FIFE did not recognize the breed until a few years later, specifically in 1988. Although once very popular, today it is not a widespread breed. There are relatively few specimens in Europe and the USA, which is why it can often be difficult to adopt pedigree individuals of this breed.

Physical characteristics of the Turkish Angora

Turkish Angora are medium sized cats, weighing between 3 and 5 kg with a height ranging from 15 to 20 cm. Their normal life expectancy is between 12 and 16 years of age.

The breed's body is elongated with a strong musculature, but is slender and refined at the same time. Their hind legs are longer than their front and they have a long and thin tail. Their characteristic thick fur gives them an appearance of a walking feather dust.

The body of the Turkish Angora needs to be either small or medium, but never large. The head shape is triangular with large almond-shaped eyes and a penetrating expressive look. The color of their eyes are usually amber, copper, blue or green. As we state above, many have heterochromia where one eye is a different color to the other. For this reason, a white Turkish Angora cat with different colored eyes are the most representative of the breed. Their ears are large with a broad base tapering points with small tufts of fur at the end.

Although the white Turkish Angora is the most representative, different colors and patterns have developed over the years. Its long, dense and fine coat can present in red, blue, cream, brown, silver, calico, bluish grey and brindle. The fur is longer on their underside, on the tail and around the neck.

Character of the Turkish Angora cat

In the Turkish Angora character, we can find a docile and calm temperament. They are well-balanced, generally equally happy at play and rest. Families with young children will need to socialize the cat early to get them accustomed to the little ones. If we do not do this, they may be reluctant to share their space with kids. If they do become used to them, however, they can become a great playmate. This is because the Turkish Angora can be energetic, patient and very playful. We will have to pay attention to their environmental enrichment as it is necessary to stimulate their cognition and curiosity.

The Turkish Angora is sometimes described as ‘dog-like’ in their character since they tend to follow their guardian everywhere. Their loyalty and attachment is quite like that of a canine. They are gentle and affectionate animals which will need to be entertained. Although not as susceptible to dogs in general, they can even be taught various tricks and games. Receiving affection is very important to them, so it makes an excellent prize.

This breed can adapt to life anywhere as long as they have plenty of affection and space when they need it. In this way, the Turkish Angora can live in an apartment, a house with a garden or even a large farm just as happily. We should bear in mind that, although the Turkish Angora will need to live with humans, they are not always great at getting along with other pets.

As with all semi-longhair cat breeds, caring for the Turkish Angora requires us to brush thoroughly and regularly. This will be to remove excess dead hair, helping to avoid hairballs which can affect their health (not to mention keeping our home free of fur). Brushing should not be too difficult as they lack an outer layer, so it shouldn't take too much effort to keep their coat looking smooth, silky and free of tangles and dirt.

In turn, we must provide them with a balanced diet, covering all their nutritional needs to provide them with the energy they need to play. To help the cat use this energy in a healthy way, we should provide plenty of toys and activities to keep them engaged and sharp. If we don't, it can lead to boredom and problematic behaviors.

We should also not neglect their nails, teeth, eyes and ears. Give these areas regular inspections and clean when necessary. Teeth need to be monitored for plaque and ears need to be free of mites.

Health of the Turkish Angora cat

In general, Turkish Angora are healthy and strong cats with relatively few congenital diseases. However, white cats are more prone than others to be born deaf or develop hearing difficulties as they grow. This is especially so in heterochromic cats or those with golden colored eyes. Deafness will need to be diagnosed by a qualified veterinarian using the correct diagnostic tests.

To help avoid hairballs harming their digestive system, we can give them special feed or give them specific products such as malt paste to help reduce them. We also need to inspect their coat for signs of parasites, skin disease or other issues while we give them their daily brushing.

Along with these special considerations for Turkish Angora cats, we should take into consideration general cat care necessities such as vaccinations, deworming and veterinary checkups.

Peterbald Cat
Abyssinian
Cymric Cat Breed
Wildcat
Related articles
New
Albendazole for Cats - Uses, Dosage and Side Effects
New
My Cat Is Not Peeing Anymore - Causes and Treatment
New
My Cat Keeps Biting My Hand
Why Does My Cat Bite Me Gently While Purring?
My Cat Peed on Me - Why and What to Do
How Many Kittens Can A Cat Have?
Metamizole for Cats - Dosage, Uses and Availability
Aural Hematoma in Cats - Causes and Treatment

Upload a picture of your Turkish Angora

1 comment
Rating:
happy
03/05/2020
looking for a blue eye white angora cat . boston , ma area i need one that i can sell the angora hair for income. thanks a million . happy .
Turkish Angora 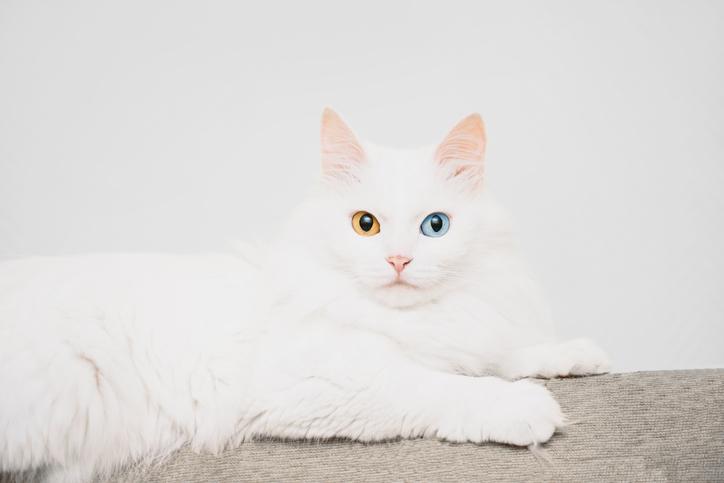 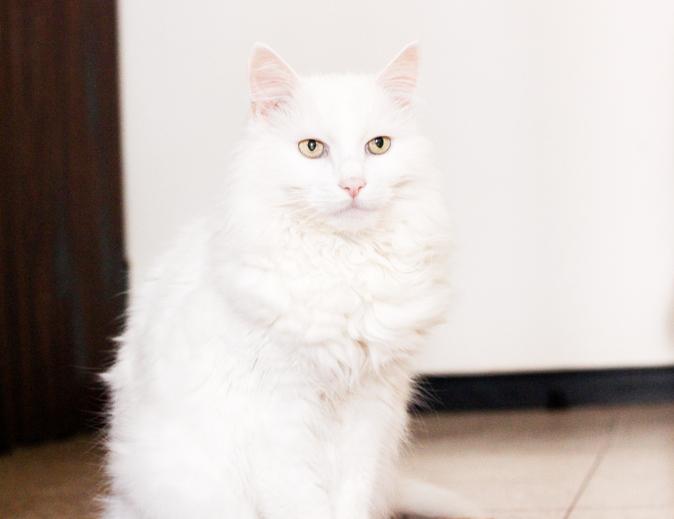 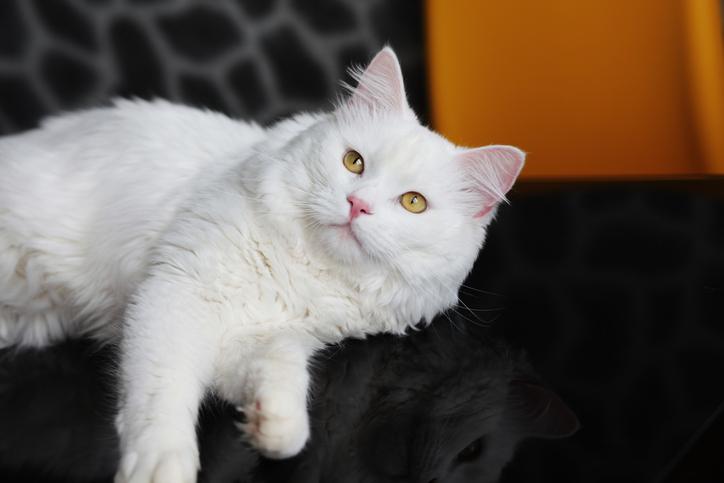 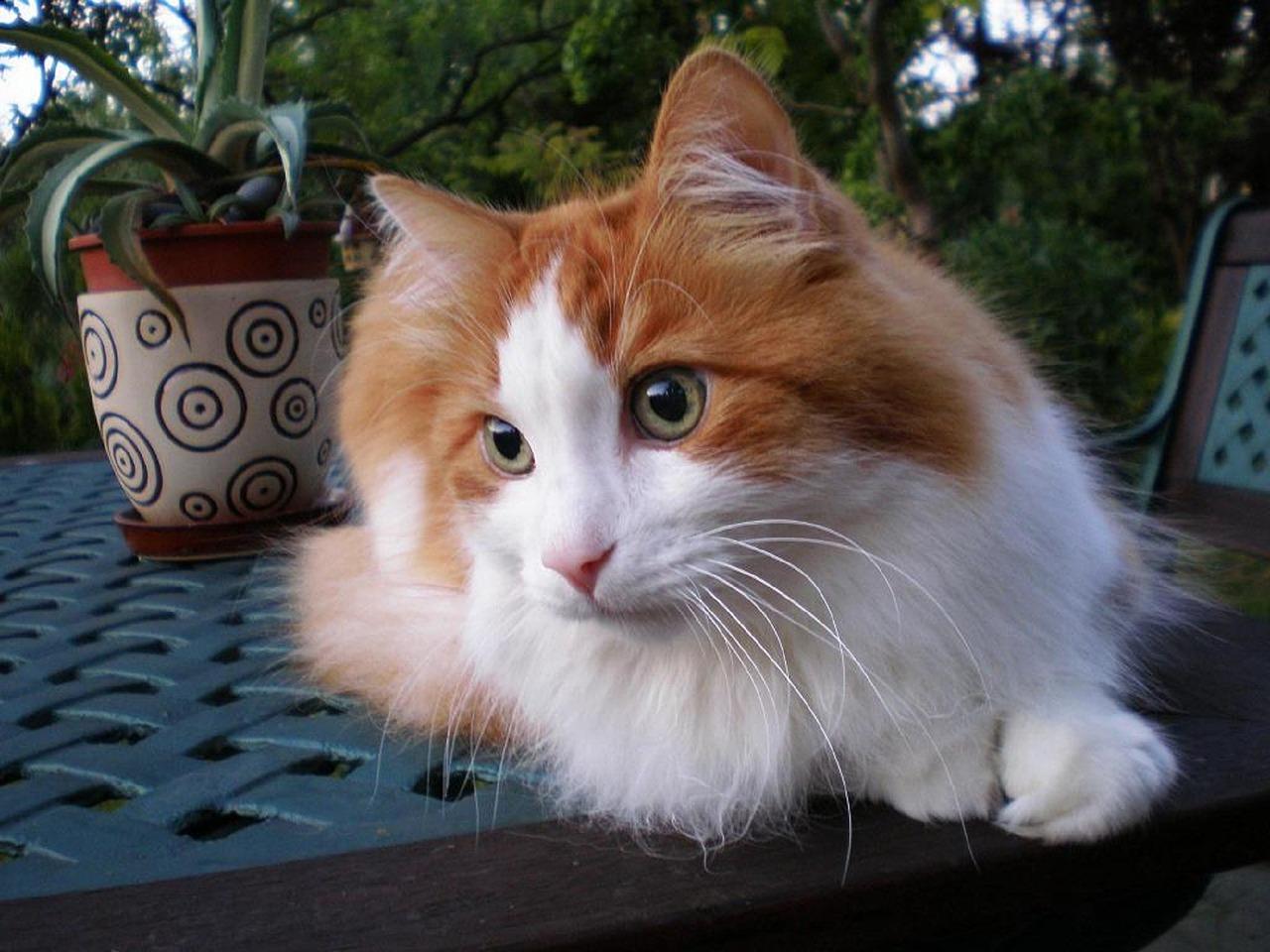 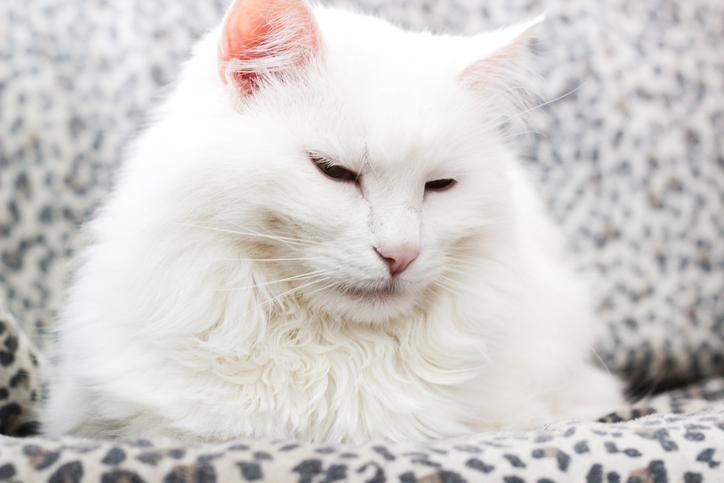 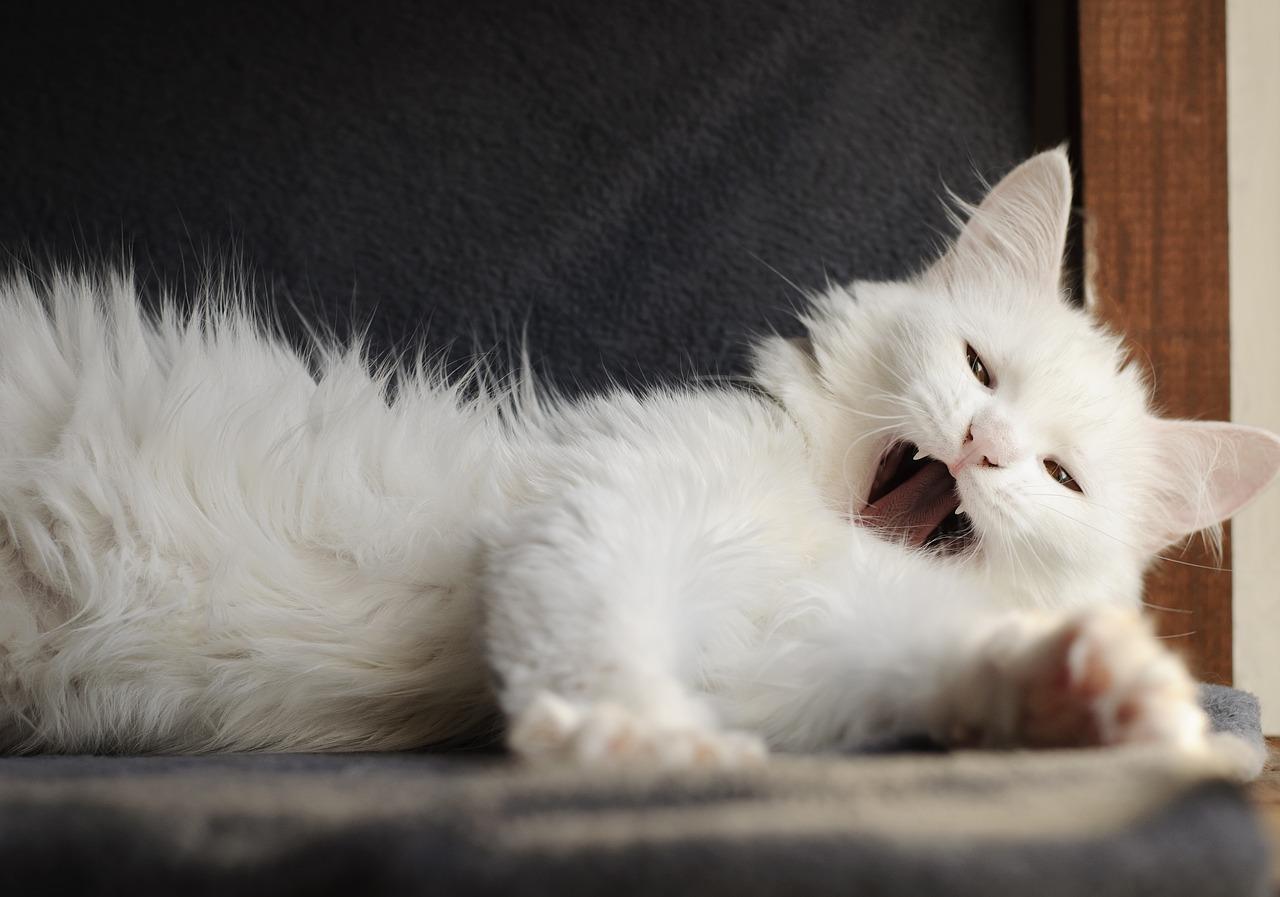 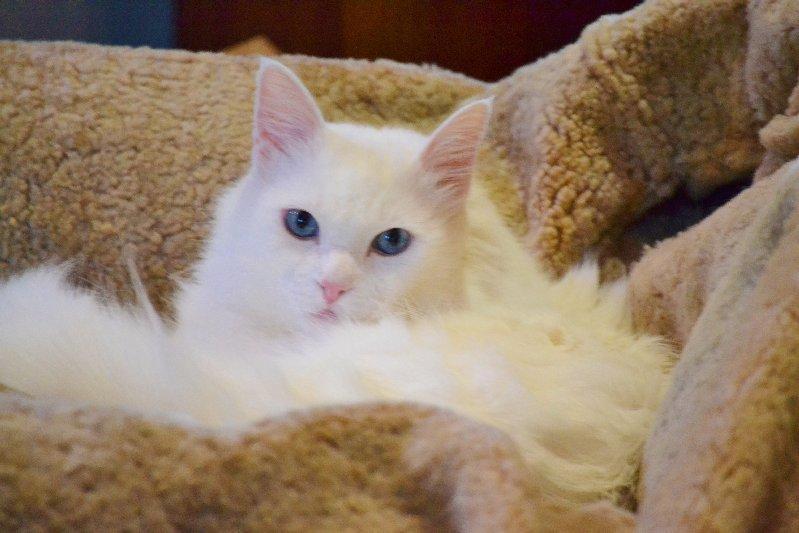 Photo uploaded by chester petrus:My beautiful Turkish Angora cat Chester lived to just over 20 years of age. He was absolutely beautiful and I consider I was extremely lucky to have him. Headstrong, loyal, always attentive involved tin everything I did, he was the perfect companion.
1 of 7
Turkish Angora
Back to top