Why Do Dead Whales Explode? 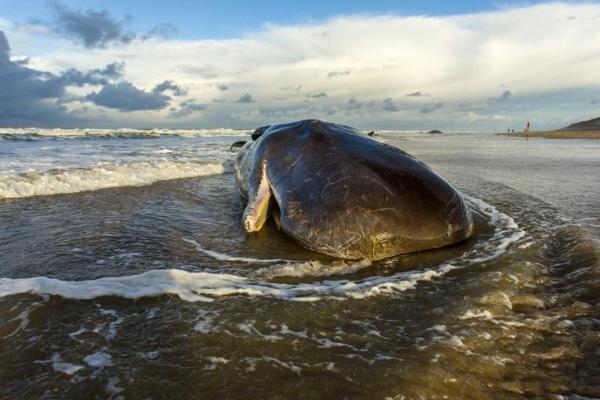 Running into a dead whale on the beach is a sad sight. These gracious and beautiful aquatic animals have amazing swimming ability, but if they find themselves beached, it can be almost impossible for them to return to the water. If there is no intervention, the result can be death, but the saga is often not over. After death, a countdown begins, with the result being a literal visceral explosion. But why do dead whales explode? AnimalWised investigates the reason behind this phenomenon, with a little warning that the answer is one some readers may find unpleasant.

You may also be interested in: Which Are the Largest Whales in the World and How Big Are They?
Contents

Why do whales beach themselves?

A cetacean is a group of aquatic mammals which includes whales, dolphins and porpoises. The many types of whale and sea creatures such as the narwhal show the diversity of these animals. However, this diversity is not what it used to be as many species have gone extinct or are currently under threat. While their bodies are ideally adapted to swim large distances and spend their entire lives in the water, they cannot move easily on land. Why whales beach themselves when death is a possibility has some explanations, but none are universally agreed upon.

Many whales die when beaching themselves because their inability to return to the water means they either become dehydrated or they drown when high tide covers their blowhole, but they are unable to move. In water, the whales bodies are support, but this changes when on land. The large mass of many of these animals can kill them as their own weight collapses their bodies.

The first explanation as to why a whale might beach itself is because it didn't. Thousands of whales die every year in the oceans. Many will sink to the bottom and be consumed by carious elements in the ecosystem. Others might be blown to the shore currents and end up beached. This means they were dead before they even arrived.

When it comes to whales beaching themselves, explanations are varied. The main factor is whether the whale strands itself on its own or if they do it together. This latter type of cetacean stranding is known as mass beaching. Here are some possible explanations:

As we stated above, these explanations for whale strandings are conjecture. A plea to fellow researchers by a group of cetologists (marine biologists studying cetaceans) in 2006 was made to try to galvanize the community by recommending better research parameters[3]. Their frustration is that whale beaching has been recorded since human records began, so a more cohesive analysis seems within reach. However, as of publishing this article, there is still no conclusive and generally accepted explanation. The reason a beached whale explodes, however, does have greater scientific consensus.

Why do dead whales explode?

When any animal dies, it does not mean life within the body dies also. Within all animals, other organisms in the form of microbes continue to act even after death. These microbes exist in the digestive system, but do not stop acting whenever the animal dies. In a whale's stomach and intestines, microbial reproduction begins after the heart stops as part of the decomposition process. As these microbes reproduce, they consume the oxygen within the dead carcass and start to break down tissue. This process converts constitutional parts of this tissue into waste products. Among these waste products are gases such as methane or hydrogen sulfide.

A recently dead whale will look similar to a live one, with the obvious exception of movement. After some time, however, you will see them seem to swell. This period is known as the bloat stage and it is caused by gases produced by the putrefaction of the body.

The bacterial activity which occurs after death can be variable as it depends on a multitude of factors. These include:

Different environmental factors will also influence the process of decomposition. Since most whales will die in the water, bacterial activity and the rate of putrefaction slow in the colder water. However, on a beach, the decomposition and production of gases increase considerably. In warmer climates, this is exacerbated even more so.

If a whale has had their stomach or digestive tract opened before they are stranded, the gases will be released through the apertures. However, as a whale's organs are relatively very strong, the build up of gas can be great without rupturing the tissue.

It is possible, again particularly in warmer climates, that heat and gas build up can result in a dead whale exploding on its own. However, this process is often expedited by human intervention. If a whale is stranded on the beach, it might be taken away to be disposed of ecologically. To do this it may be lifted up on a truck with a harness or similar apparatus. If this happens, the disturbance caused by the equipment can result in the beached whale explosion.

As people have recognized the phenomenon of exploding whales, many try to cut into the stomach to release this gas build up before an explosion occurs. Sometimes, however, we can underestimate how much gas has built up and cutting into the organs results in a nasty explosion. Parts of the dead whale's internal organs and tissues will often be projected across a large area due to the amount of gas build up.

An exploding whale is a relatively rare occurrence. When it does happen, it quite often makes the news. The stories get bigger with mass strandings or if the explosion is particularly gory.

On a beach in Oregon, USA in 1970, a large sperm whale weighing between 40 and 655 tons was stranded on the shore. The local government wanted to remove the carcass from the beach, but is sheer size made it impossible to do this while it was still intact. The state decided to decided to place dynamite next to the body to explode the whale into very small pieces. Scavenger animals would act to cleanse the area of viscera and debris. Unfortunately, not all went according to plan and we find ourselves with another reason why dead whales explode. The answer is because sometimes over zealous members of local highway divisions use so much dynamite to clear the carcass that it sprayed dead whale matter more than half a mile away, covering spectators and even caving in the roof of a nearby parked sedan[4].

In Taiwan in 2004, a beached whale had been found and removed from the beach on a flatbed truck. Unfortunately, the gas build up continued in transit and the whale exploded in downtown Taipei[5]. The result was a vast amount of effluence deposited over local businesses and a few unfortunate bystanders.

While the deaths of these animals are no laughing matter, the relative incompetence of those tasked with removing the whale carcasses is quite funny. More tragic is the story from 2017 when a mass stranding of 650 pilot whales (Globicephala) occurred on the coast of New Zealand[5]. Those which died were opened to release gas before explosions occurred naturally. Fortunately, the local community was able to rally and provide support to the whales. by keeping them warm and hydrated, they were able to save around 200 of the whales and return them to the sea.

If you want to read similar articles to Why Do Dead Whales Explode?, we recommend you visit our Facts about the animal kingdom category.

Bibliography
Why Do Ants Carry Dead Insects?
Why Do Cats Bring Dead Animals Home?
Is a Killer Whale a Whale?
Do Killer Whales really Kill?
Related categories
Endangered animals
Most read
1.
What Animal am I According to my Zodiac Sign?
2.
Are There Venomous Spiders in the UK?
3.
What Does It Mean When a Cat Shows Up at My Door
4.
10 Most Beautiful Animals in the World
5.
The 10 Most Solitary Animals in the World
6.
Why do Dogs Get Stuck when Mating?
7.
How Many Types of Lions Are There?
8.
Most Common Cat Eye Color and Their Meaning
Different Types of Whales
Why Do Crows and Ravens Caw?
Why Do Cats Like Boxes?
Why do Cats have a Rough Tongue?
20+ Incredible Animals that Migrate and Why
Why do Cats Meow?
Why do Horses Neigh?
Why Do Bees Sting?

Why Do Dead Whales Explode? 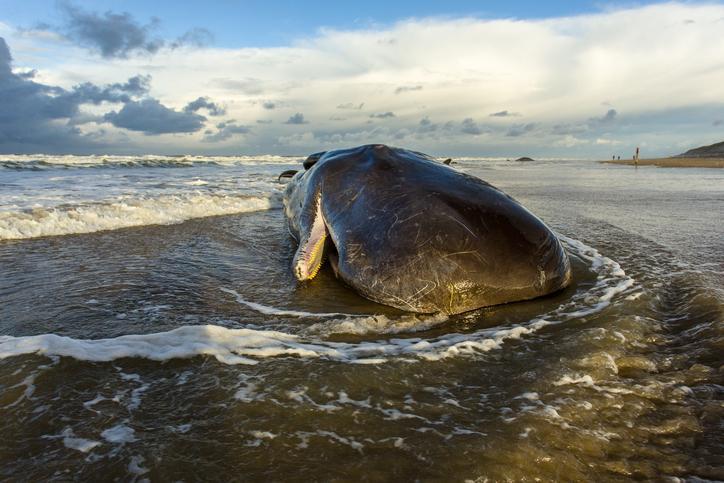 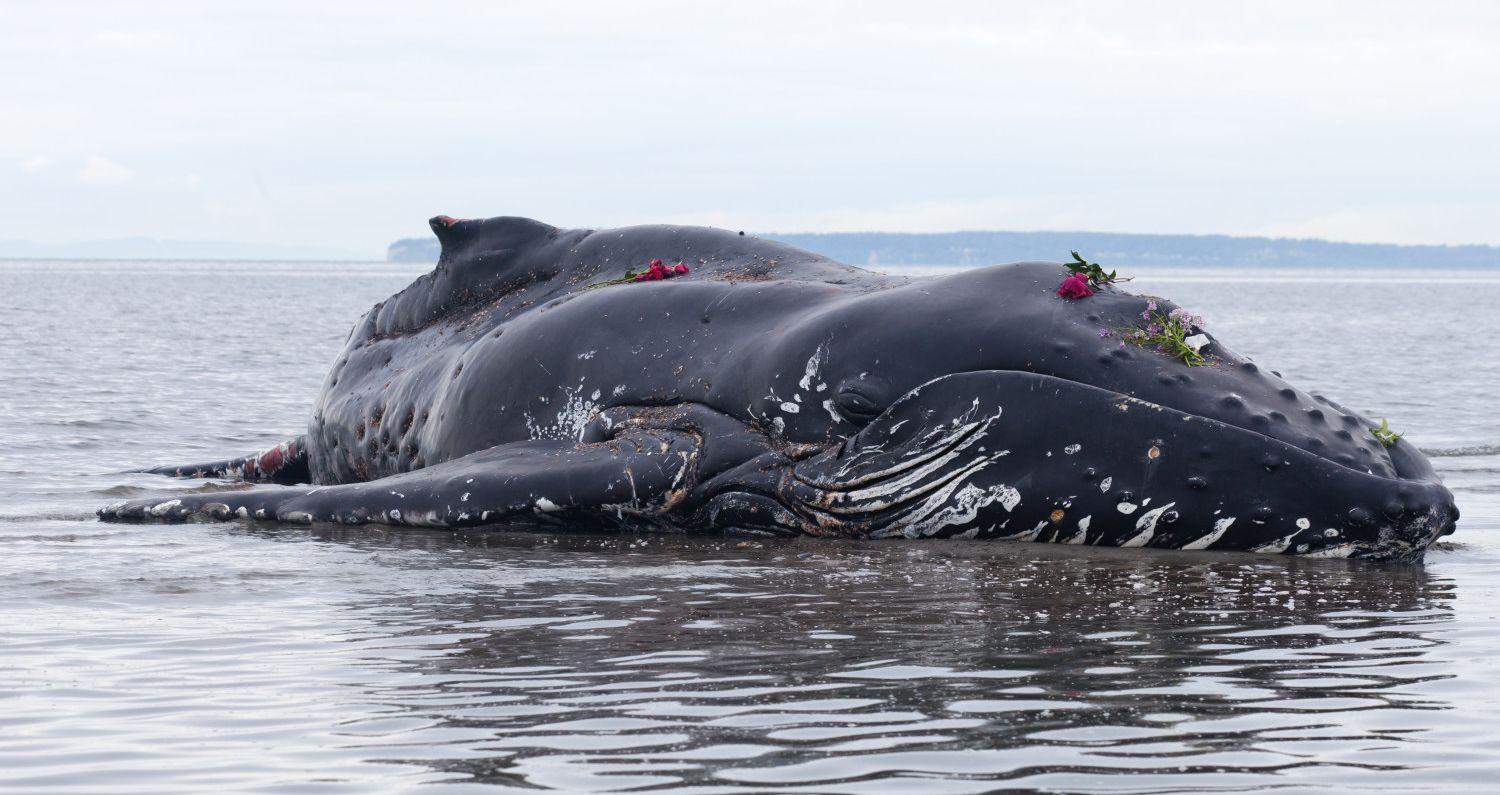 1 of 2
Why Do Dead Whales Explode?
Back to top